1st November 2017, New Delhi: The Prime Minister of India, Narendra Modi, while addressing the nation on 71st Independence Day, made it quite clear that there would be a New India by 2022 - when India marks its 75 years of independence. He said that the New India will be free of corruption which means citizens and businesses will not have to pay bribes to get their work done.

LocalCircles conducted its India Corruption Survey 2017 to ascertain citizen experiences with corruption and bribery in the last 12 months. The results of the survey bring out some interesting insights starting with the fact that corruption is largely a local problem with 84% citizens paying a bribe in last one year for a local issue ranging from municipal, police, local tax compliance, property registration, etc. The survey, which received more than 100,000 votes in total and had participants from over 200 cities responding to 8 questions in the national poll. State level polls were also conducted in 12 states to understand which states according to citizens have made progress in reducing corruption and the states were ranked from 1 to 10 for citizen perception of corruption. Uttar Pradesh turned out to be at the top of the list for reducing corruption in the last 1 year and West Bengal was at the bottom of the list.

A recent Forbes report rated India as the most corrupt country in the Asia-Pacific region, higher than even countries like Vietnam, Thailand and Myanmar. For a country which is on path of massive development, this piece of statistic could act as a deterrent for many foreign investors. 45% citizens in the first poll said they had paid a bribe in the last 1 year to get their work done.

On the question of actions by State Governments, 51% citizens said their local/state government has not taken any steps in the last 1 year to reduce corruption. Only 9% citizens said that their state had a functional helpline to report corruption issues.

On a question on why did they pay a bribe, 36% citizens said that they were forced and paying a bribe was the only way to get the work done.

On the question of how the bribery transaction was conducted, the highest percentage of citizens indicated that cash is still the primary mode of bribery transactions. In one of the other polls, 30% citizens said that bribery continues even after the local departments were computerised and majority said CCTVs were one of the deterrents that works against corruption.

Below is the summary of 8 national India Corruption Polls: 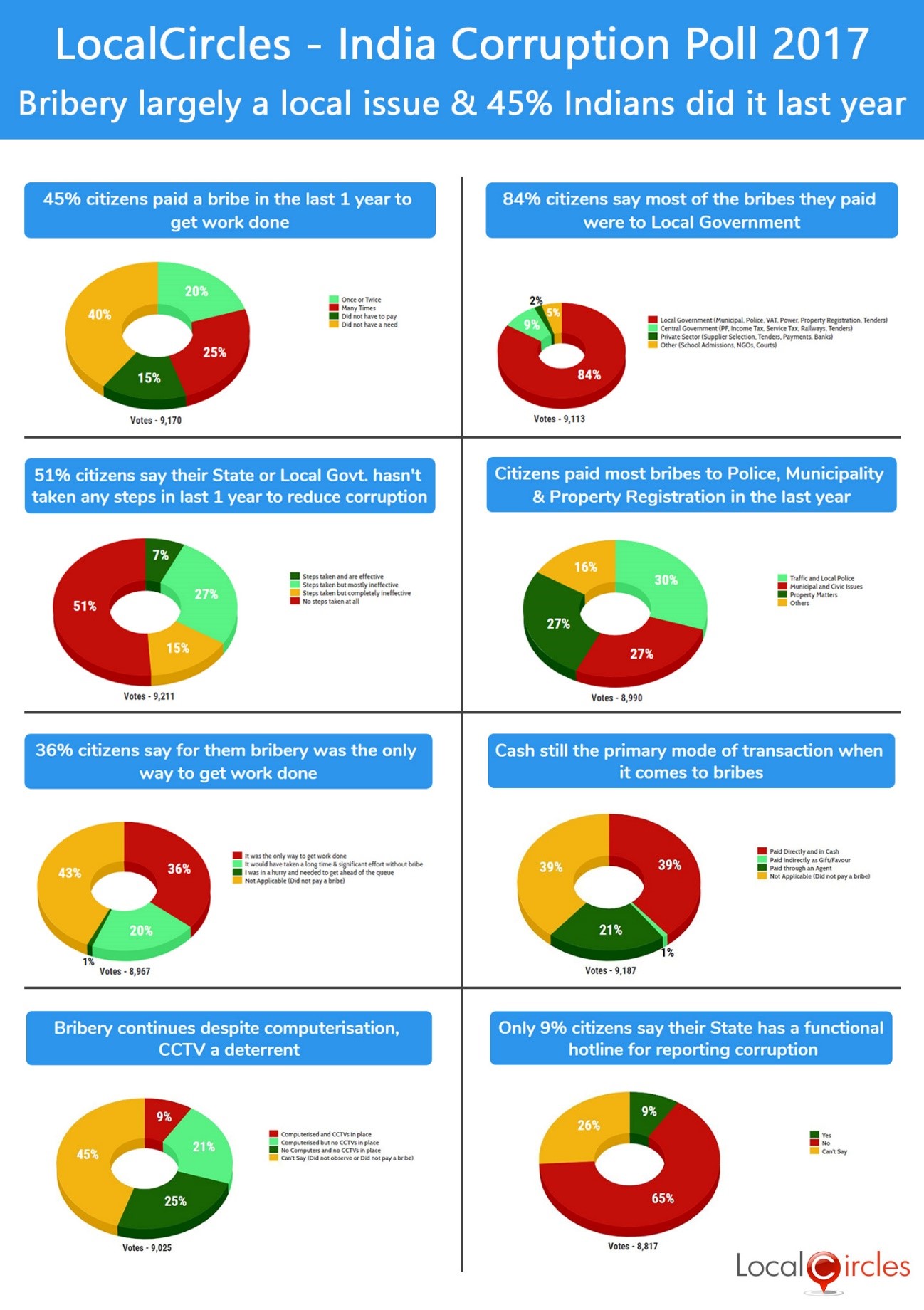 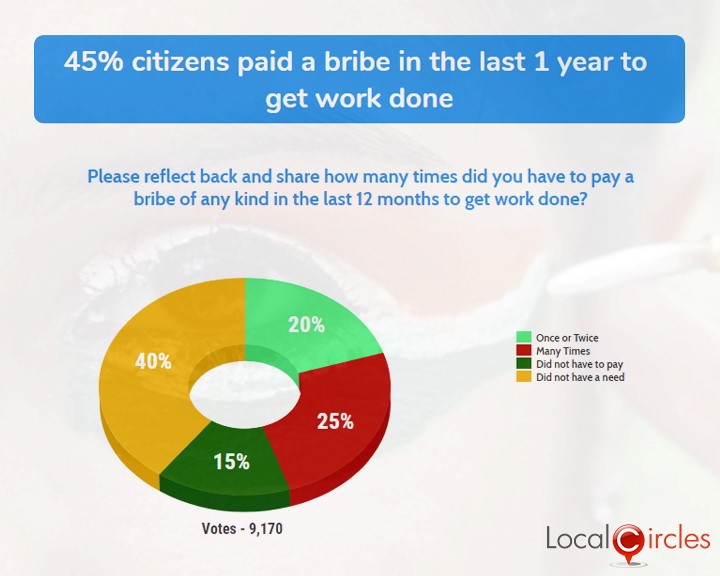 How many times did you have to pay a bribe of any kind in the last 12 months to get work done? 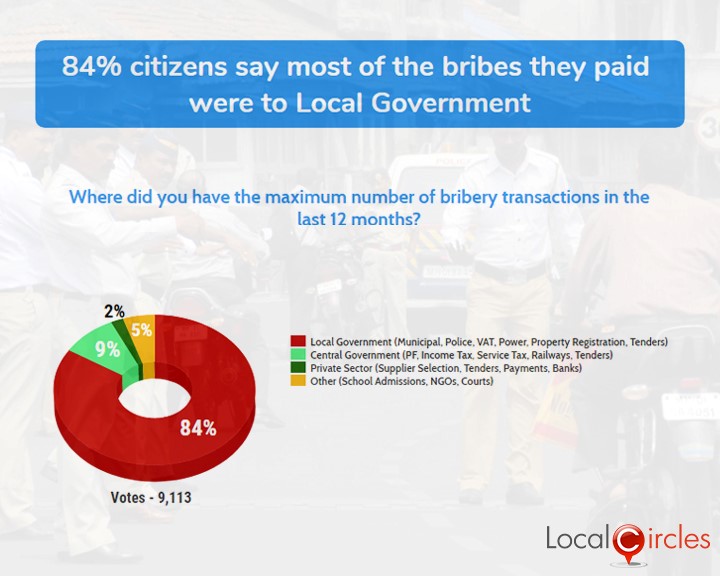 Where did you have the maximum number of bribery transactions in the last 12 months? 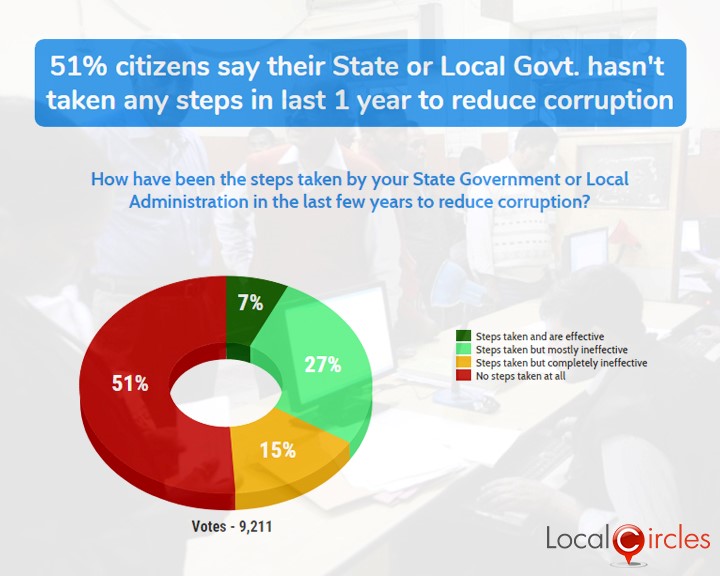 How have been the steps taken by your State Government or Local Administration in the last few years to reduce corruption?

Poll #4 – Most bribes paid to police, municipality and for property registration - 8,990 votes 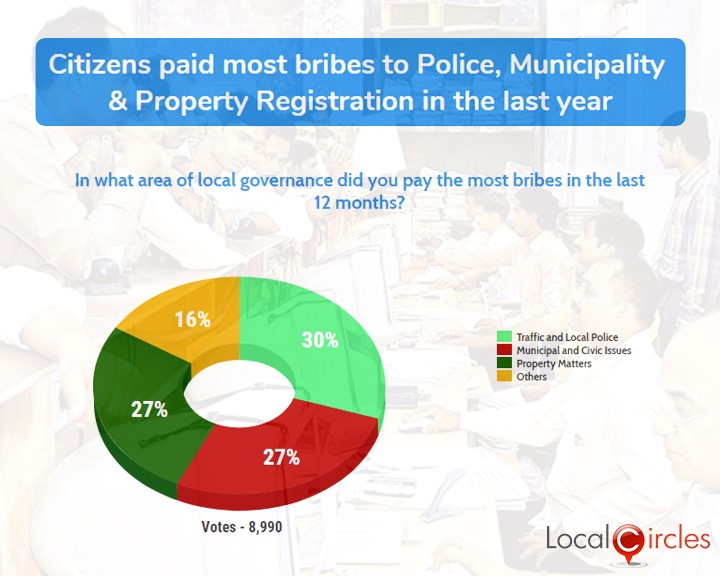 In what area of local governance did you pay the most bribes in the last 12 months? 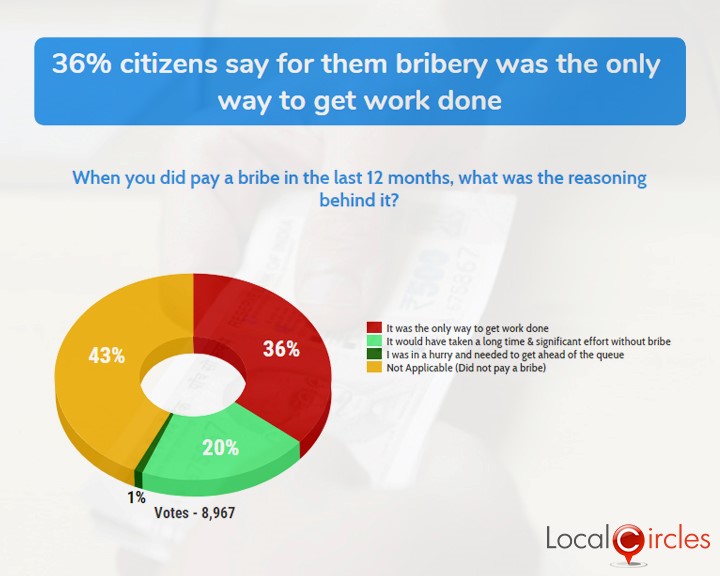 When you did pay a bribe in the last 12 months, what was the reasoning behind it? 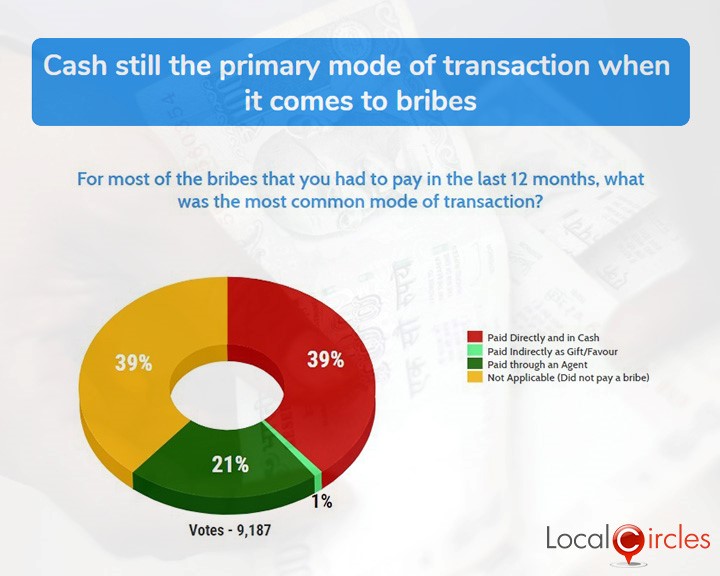 For most of the bribes that you had to pay in the last 12 months, what was the most common mode of transaction? 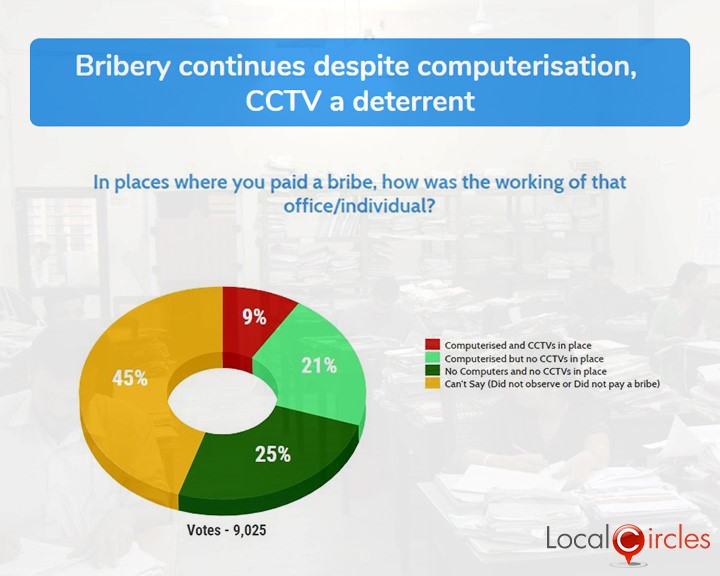 In the place where the bribe was paid, how was the working of the office/individual? 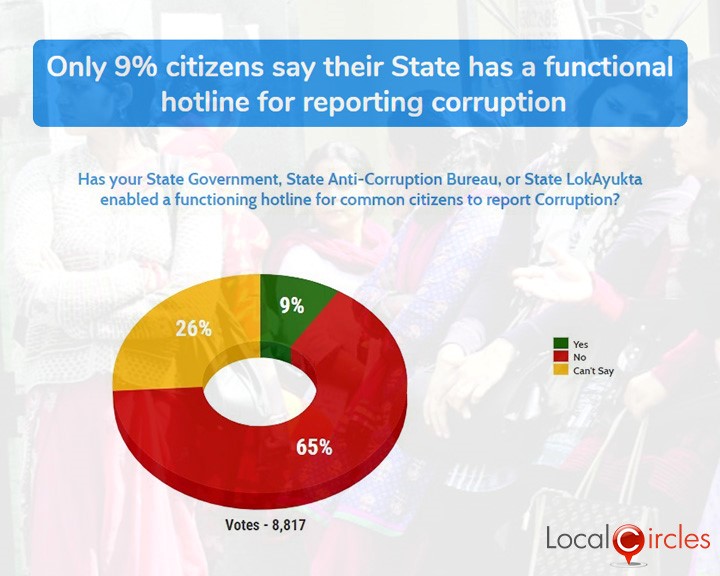 Has your State Government, State Anti-Corruption Bureau or State Lokayukta enabled a functioning hotline for common citizens to report corruption?

Many citizens on LocalCircles reported that there is no easy way for them to report cases of corruption. They said even if they are able to report a case, no action is ever taken on it. This survey makes it pretty clear that the central government will have to take some harsh steps to reduce the level of corruption in the country and will have to align with the interests of the state government so that ant-corruption policies could be well implemented. 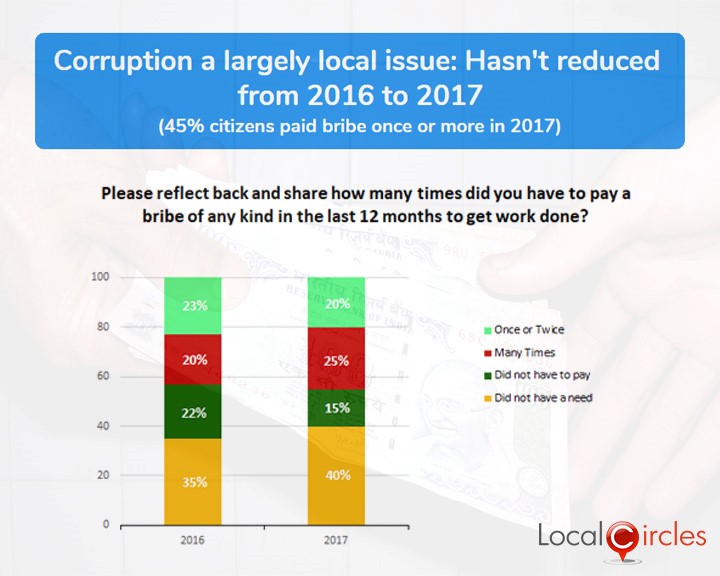 The comparison of the 2016 and 2017 India Corruption Surveys reinforced the fact that corruption in largely a local issue and has not reduced. 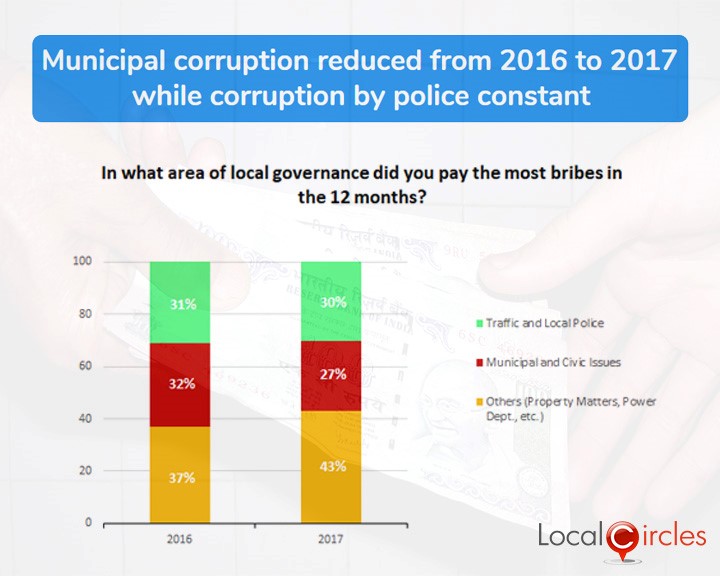 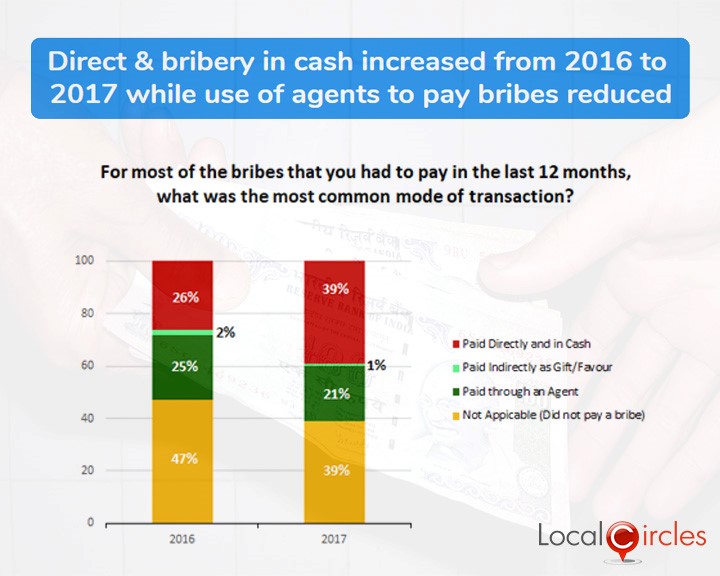 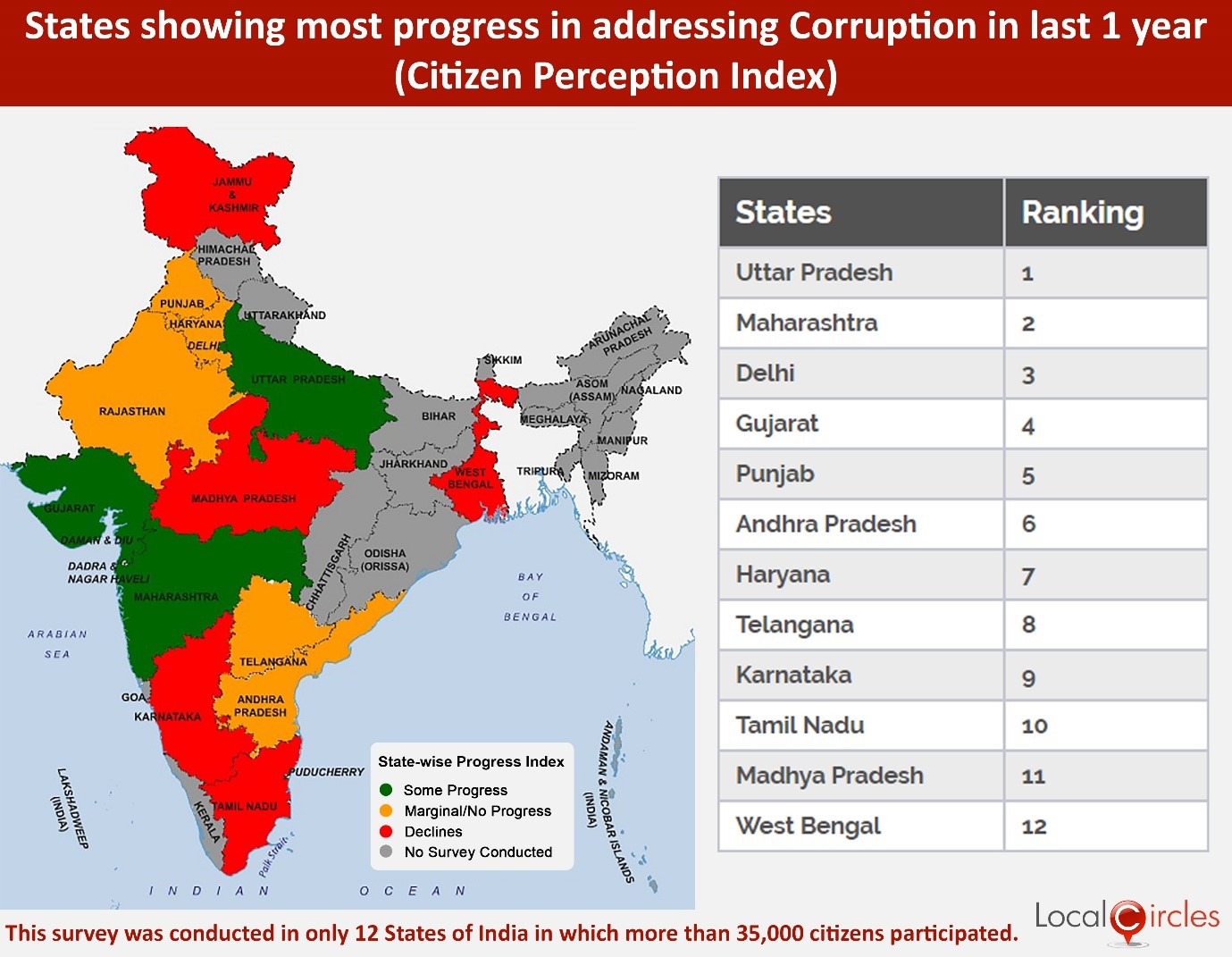 In various structured discussions, citizens also suggested ways in which corruption in states can be reduced. These suggestions included hand-picking dedicated and honest officers and deputed in the known corrupt areas, human intervention to be minimised and e-governance to be introduced in all state government departments, reducing the discretion of the officers, especially in the revenue/sates tax/excise departments, like passport office more private players should be involved in improving government processes and judgement in corruption related cases should be fast tracked.

Details of the state-wise polls 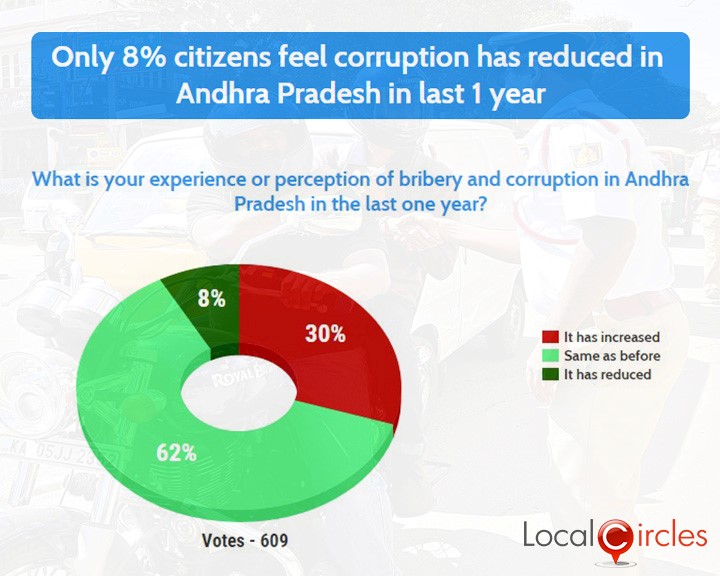 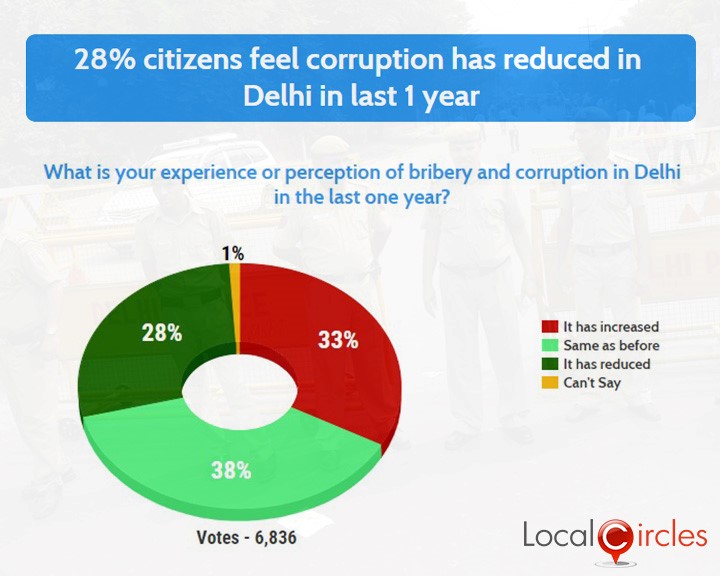 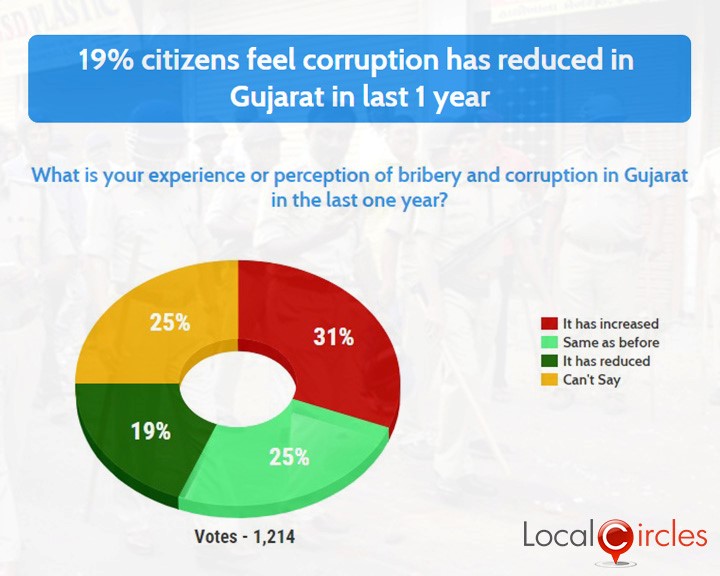 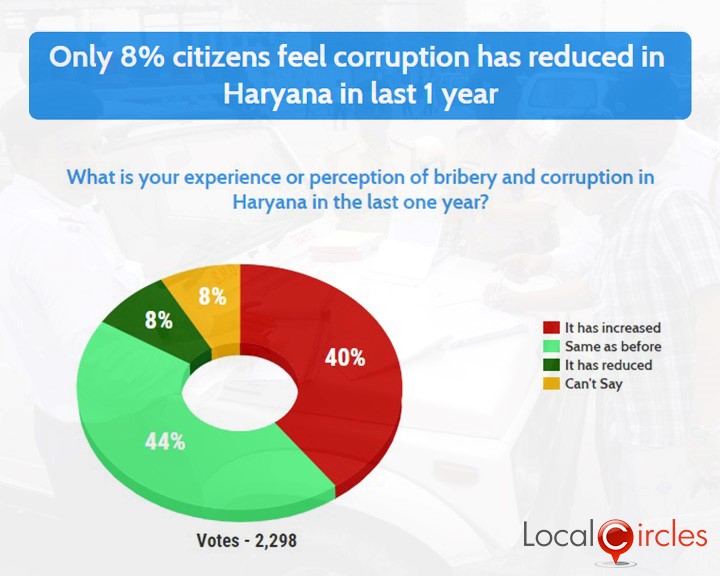 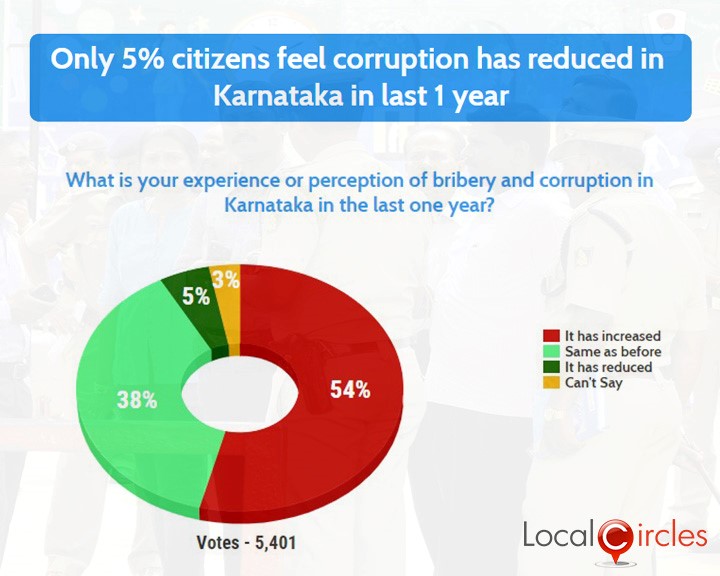 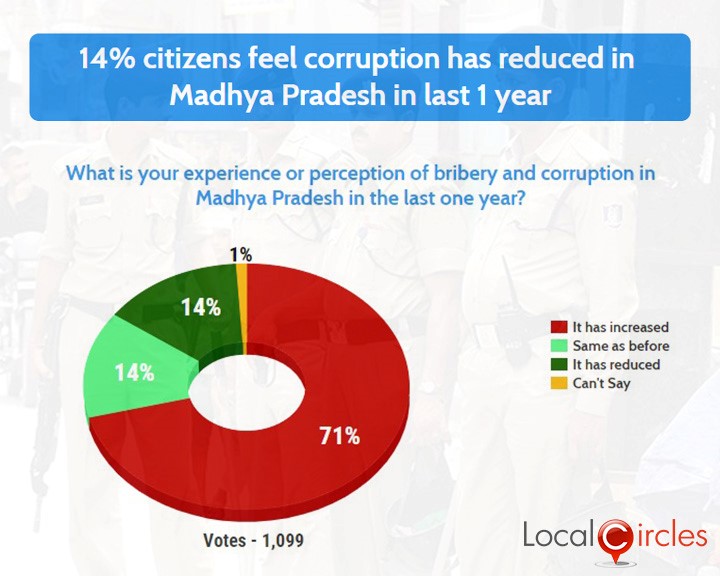 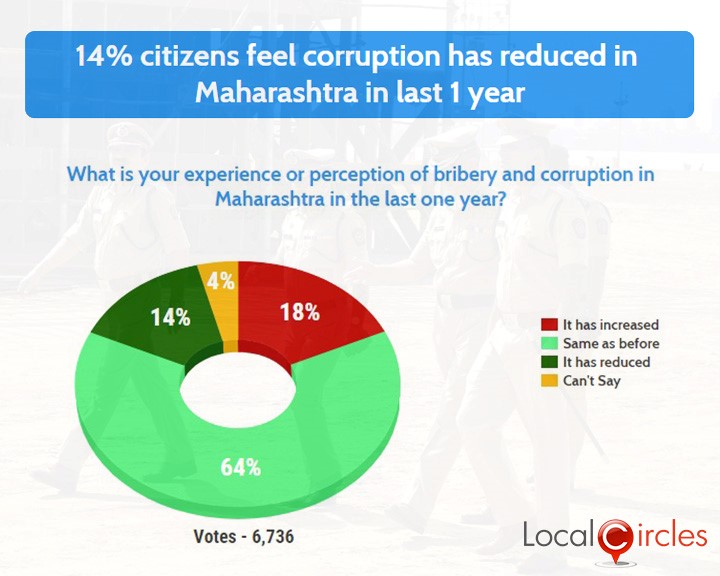 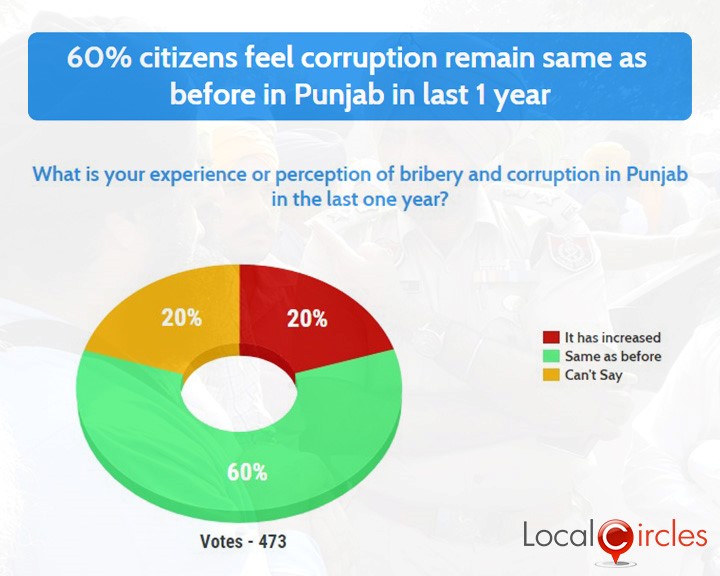 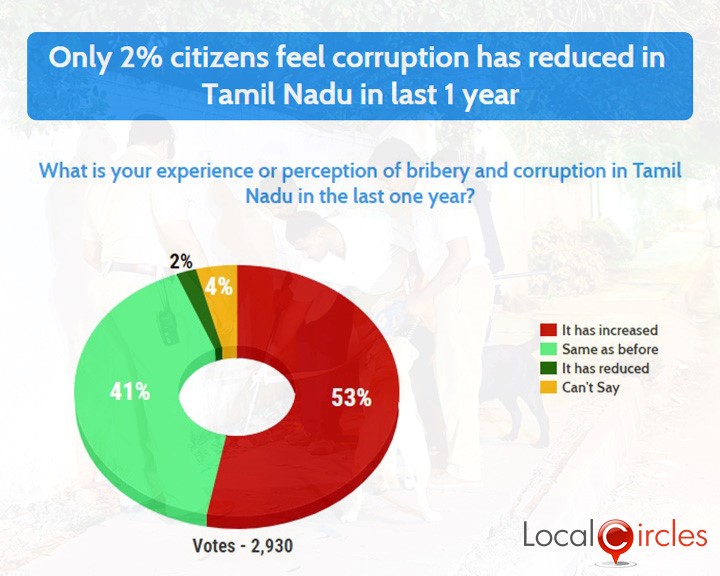 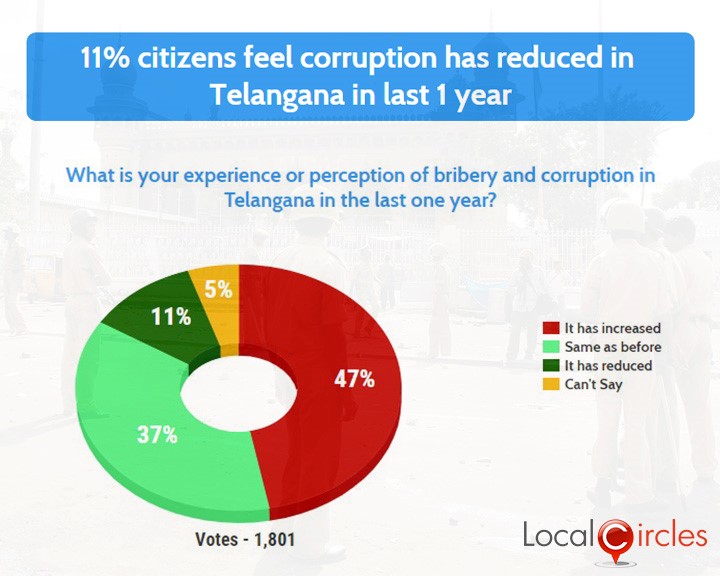 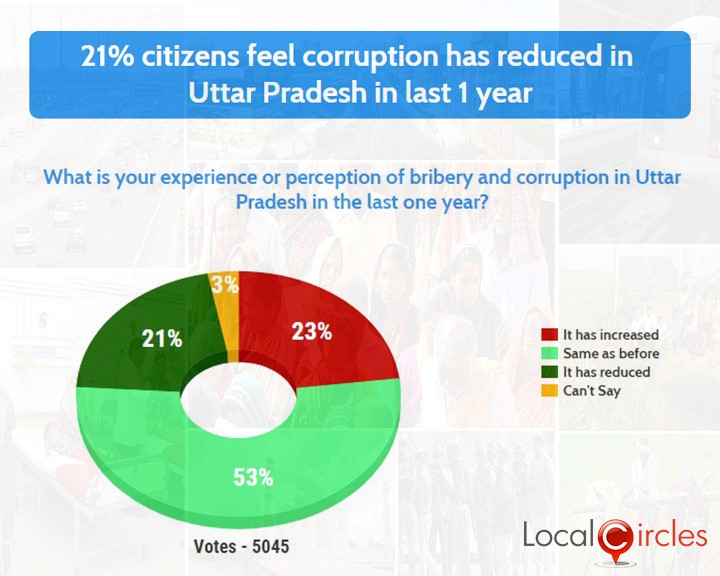 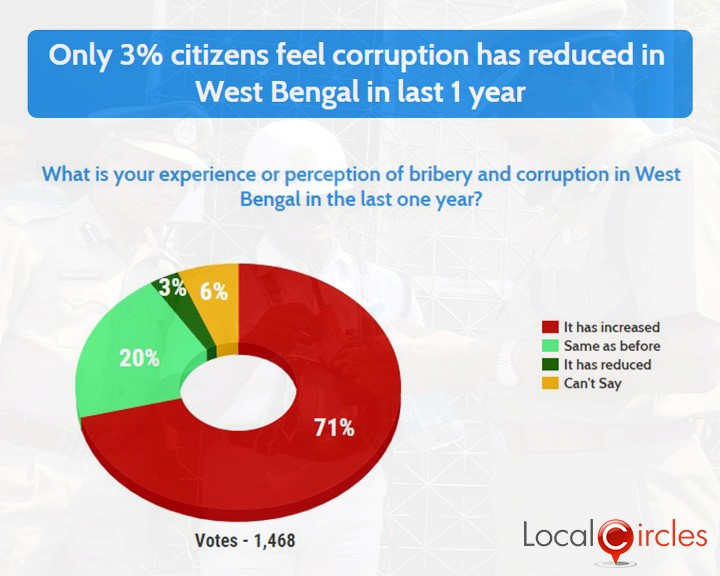 In order to enable citizens to stand up against corruption, LocalCircles in collaboration with Transparency International launched Together Against Corruption Online Community on LocalCircles in 2015, which now has more than 65,000 active members and is the largest community in India for this cause. To join this community, please log on to: