India at 74: More than half the population optimistic that India will have growth and economic recovery within 2 years

August 15, 2020, New Delhi: The Indian Government has taken some big decisions in the last year. Be it the abrogation of article 370, the announcement of CAA or taking a stand against Chinese apps and imports after the skirmish with Chinese troops in Galwan valley, the Government has shown that they are ready to take the tough decisions for the long-term betterment of India and its citizens.

LocalCircles has conducted its Independence Day survey for the 4th consecutive year to get pulse of the citizens on what India is likely to achieve by the time it completes 75 years in 2022. Citizen feedback has been sought on various national issues ranging from corruption to social stability, and from COVID-19 pandemic to leveraging its demographic dividend. This year’s survey received over 62,000 response from over 280 districts of the country.

Bribery and corruption have historically been a major problem in the world’s largest democracy. The pledge of reducing corruption in the country was the pillar of Modi Government’s election campaign, both in 2014 and 2019. India slipped 2 spots and stood at the 80th position in Transparency International’s ‘Corruption Perception Index 2019’. This portrays a worrisome situation in the country which needs immediate attention.

In the first question, citizens were asked how they see bribery and corruption situation changing in the next 2 years. 26% said they see the situation improving while 28% said they feel the situation will deteriorate. 44% said situation would remain the same and there would be no change.

India @74: Only 26% citizens feel bribery and corruption will reduce in India before it turn 75 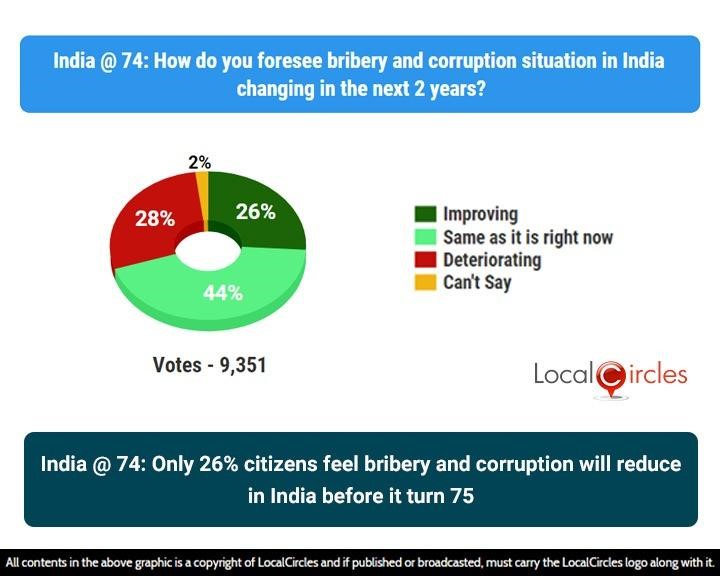 When compared to survey results from the last 2 years, it looks like a larger number of Indians have turned pessimistic about India’s ability to reduce bribery and corruption before it turns 75. 44% this year, compared to 31% in 2109 and 29% in 2018, said that they feel the bribery and corruption situation in the in India will remain the same in the next 2 years. The Centre recently prepared a vision document for creating a new corruption and poverty-free India by December 2022, which will be the 75th year of India’s independence. 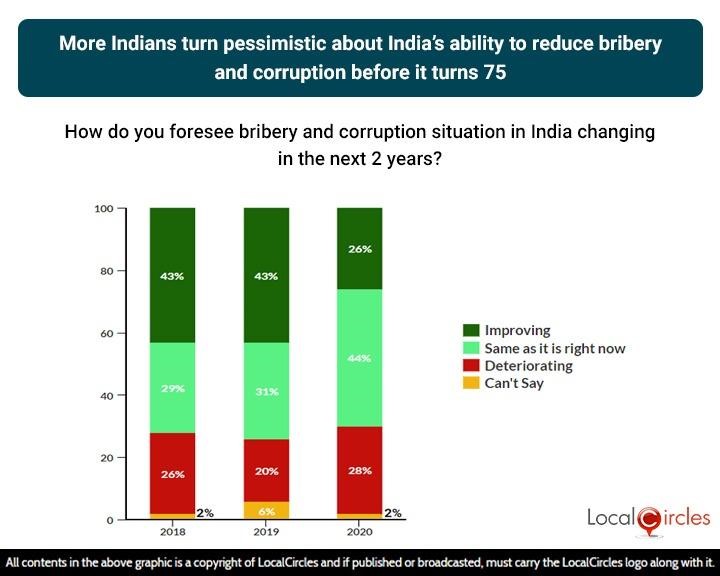 India’s clout in the world has been growing and various major economies now want ‘cordial relations’ with us. For example, India is critical for United Kingdom’s post-Brexit economic strategy and the European Union wants a free trade agreement with India. India is also an integral part of the Quadrilateral Security Dialogue which is an informal strategic forum between the United States, Japan, Australia and India, and has established itself as the premier strategic forum for coordinating responses to China’s rise. QUAD organises summits, information exchanges and military drills between the 4 member countries.

After the recent advancements by China in Galwan valley and skirmish with the Indian troops, India took decisive action on the economic front and banned approximately 60 apps of Chinese origin that could compromise national security. USA citied India’s example shortly thereafter and has outlined to ban some of the same apps.

India @74: 69% citizens expect India’s clout in the world to improve before it turns 75 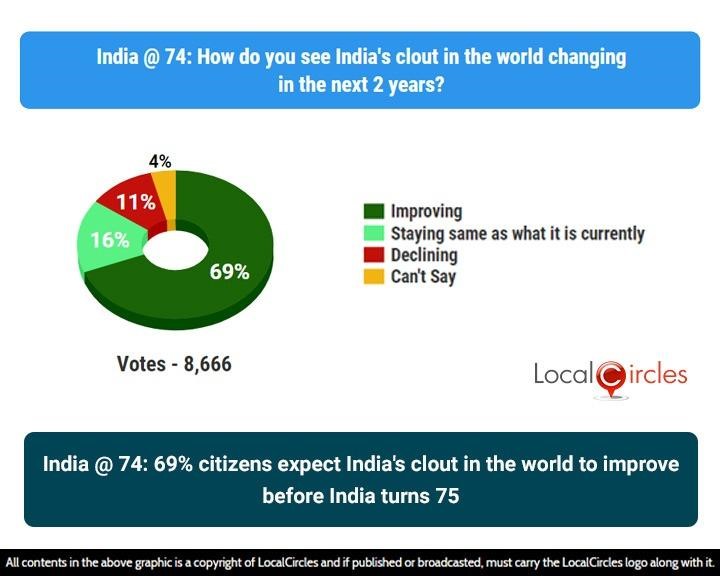 The positivity in this area though has reduced a bit in 2020 and fewer Indians now believe that the country will be able to improve its clout in the world in the next 2 years. 79% citizens in both 2018 and 2019 had said that they expect India’s clout in the world to improve in the coming years while the number has dropped to 69% this year. In the last few years, India has had a growing international influence and a prominent voice in global affairs 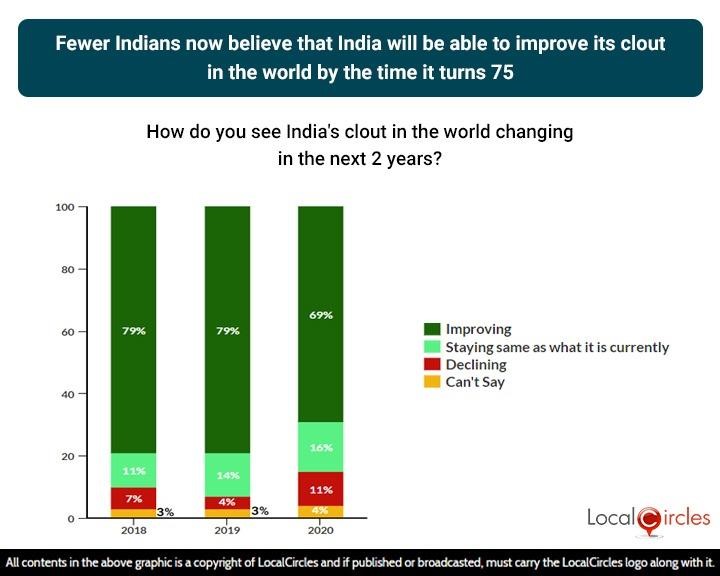 India’s economy was already on the slide when the COVID-19 pandemic forced most of the world into a lockdown. Strict lockdown was enforced for over 2 months across the country which led to shops, businesses, factories and industries halting production. The Government started lifting the restrictions from the 1st of June, but many businesses had already faced major disruption during the lockdown months. If the experts are to be believed, the economic recovery from here will depend on how the COVID-19 pandemic behaves across the country in the coming months, especially in industrialised states, with many states still needing to enforce intermittent lockdowns. 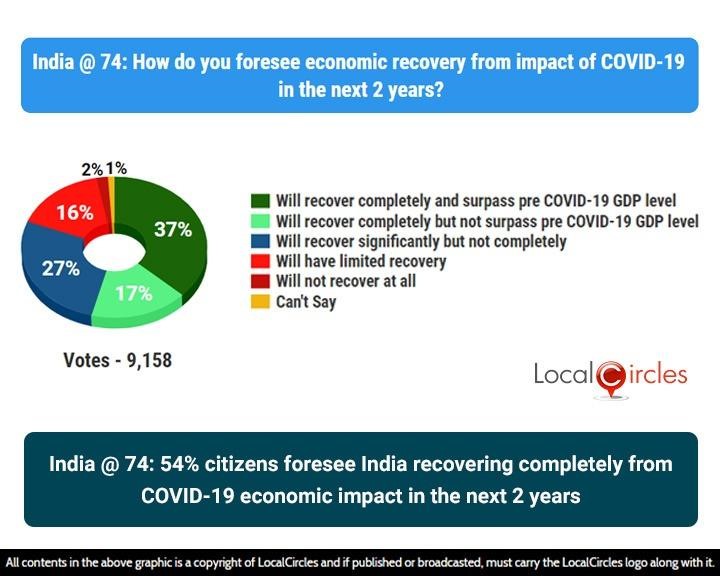 This means that 54% citizens foresee India recovering completely from COVID-19 economic impact in the next 2 years. Among other indicators, GST collection in July 2020 were lower than those in May 2020, indicating that the economy could take longer than expected to come back to pre-pandemic levels. With multiple rounds of economic measures announced, the Government is however optimistic that the country’s economy would make a full recovery sooner as they continue to announce various new policies and fiscal support.

The following question asked citizens how they see India’s social stability, which means the ability of citizens of different caste and religion to live with each other in harmony and peace, changing in the next 2 years. 26% said it will improve, 43% said it will stay the same and 28% said it will deteriorate.

India @74: Only 26% citizens believe India will be able to improve social stability before it turns 75 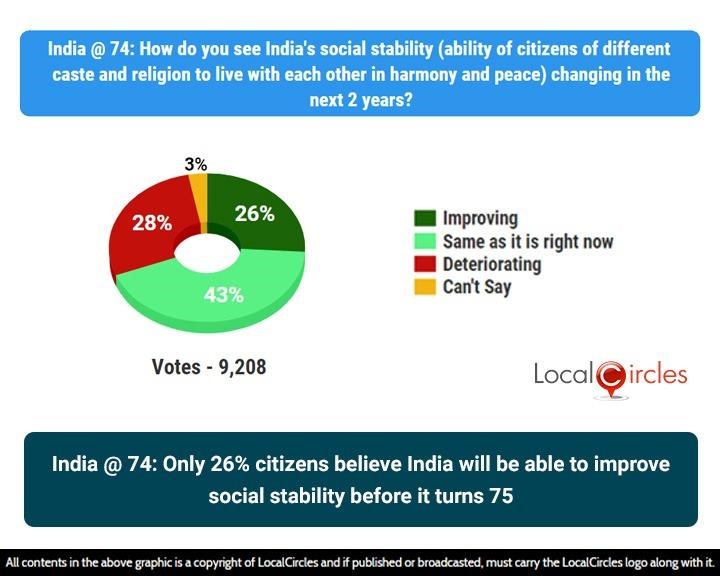 In the world’s largest democracy, social stability is an important aspect. Some of the instances that have happened in the last year or so like the CAA demonstrations and Delhi riots, have reduced the citizen confidence in peaceful co-existence of different religions. But the way in which the Ayodhya matter has been resolved is also being termed as ‘socially stable’, with a 5-acre land being allotted for building a mosque and Prime Minister Narendra Modi conducting the Bhoomi Poojan on August 5th, marking the start of the process to build a grand, Ram Mandir. In times of crisis, social stability is of paramount importance, however, fewer people now believe that India will be able to improve social stability in the next 24 months before it completes its 75 years of independence. The percentage of people who said social stability in the country would improve, stood at 43% and 42% in 2018 and 2019, respectively. This year, the number has fell to 26%. 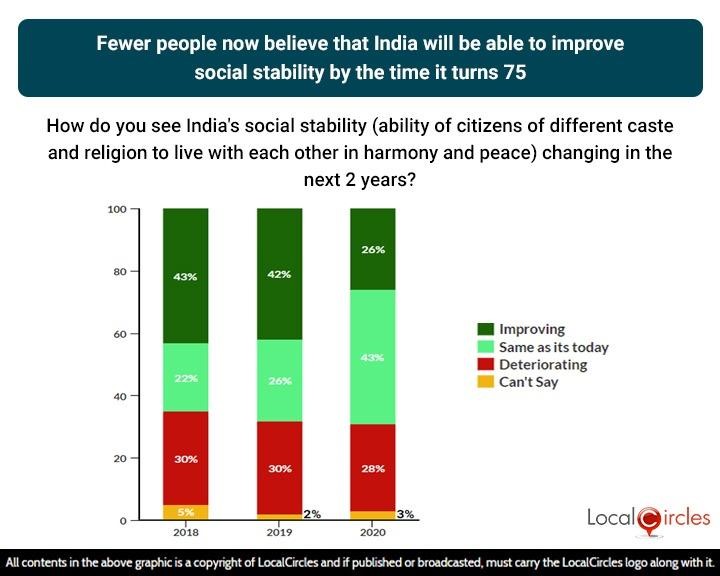 Prime Minister Narendra Modi, while addressing the India Global Week 2020 recently, said the world’s economic revival from the current crisis will be linked to the growth of India and the country is ready to do whatever it can to further global good and prosperity.

India @74: 57% citizens foresee growth and prosperity for most Indians before India turns 75 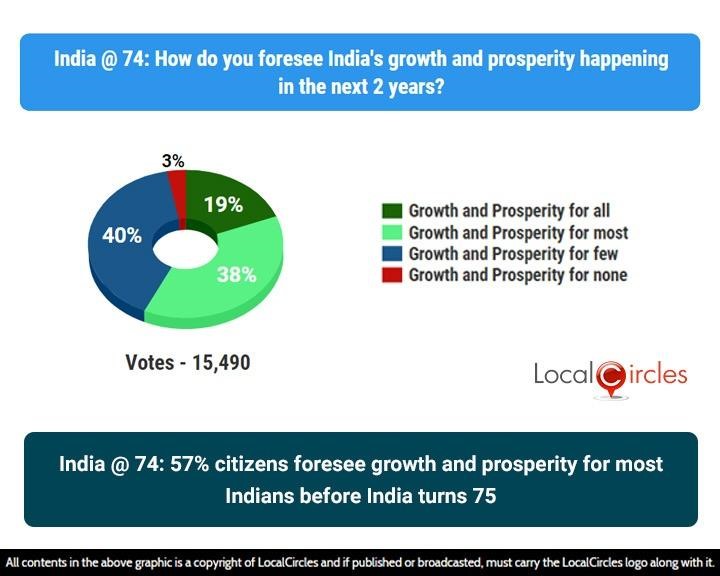 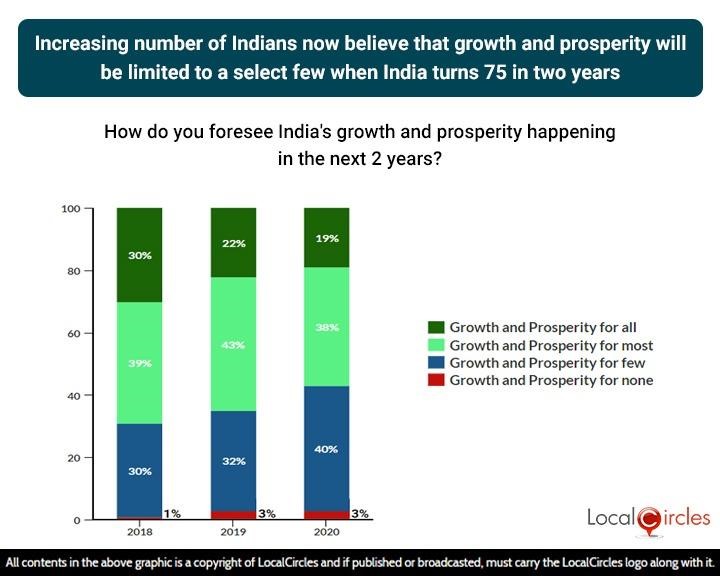 India @74: 69% citizens feel India will be able to leverage its demographic dividend by creating enough employment or entrepreneurship opportunities in the next 2 years 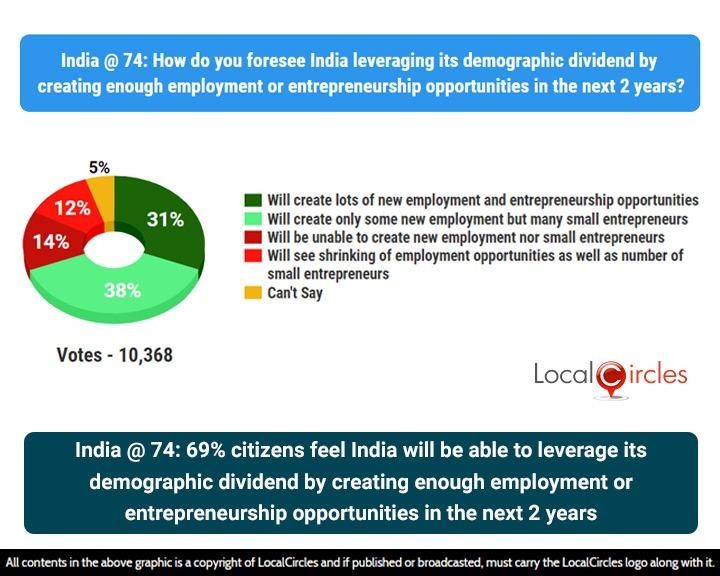 This means that 69% citizens feel India will be able to leverage its demographic dividend by creating enough entrepreneurship opportunities in the next 24 months while only 31% of them believe that they will also be able to create new jobs. When compared to the last year where this number stood at 70% people believing that India will able to leverage its demographic dividend. Though many now realise that the country is not likely to create enough employment opportunities, the optimism about creating many more small entrepreneurs continues to be strong. India is one of the youngest countries in the world with 50% of India’s population under the age of 25. India’s ability to channel this youthful energy in education and constructive pursuits, can help transform the nation while if some of this energy is not channelised effectively, it can become a liability. 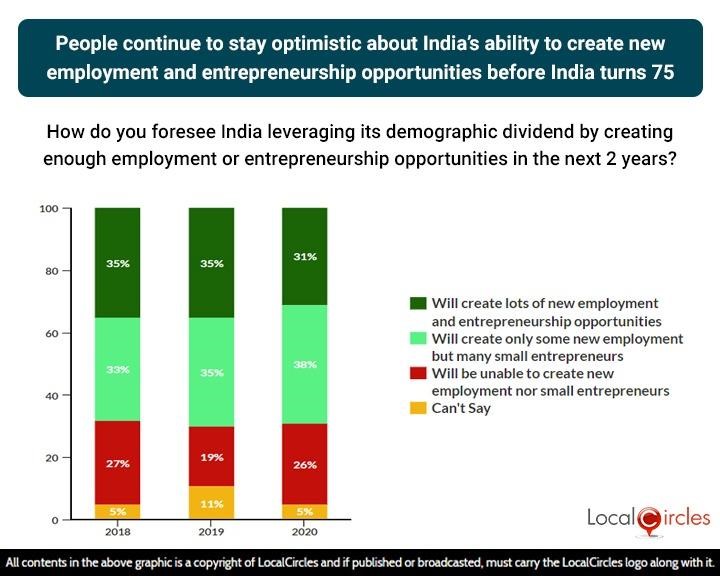 In summary, as India marks its 74th Independence Day, one of the most unusual ones in the last several decades, given the COVID-19 pandemic, there is rising pessimism in some areas like being able to improve social stability and reduce corruption by the time it completes 75 years. At the same time there is the hope amongst people in India being able to improve its global clout, become more self-dependent on the manufacturing front, achieve growth and prosperity and create lots of new entrepreneurship opportunities. The COVID-19 pandemic has impacted India’s economic plans a good bit and with the highest daily case load in the world and total cases approaching 2.5 million, containing it will have to be India’s number one priority. If India is effective in containing it while minimising the economic impact, it will certainly be able to achieve the economic recovery that is so critical for India’s future. 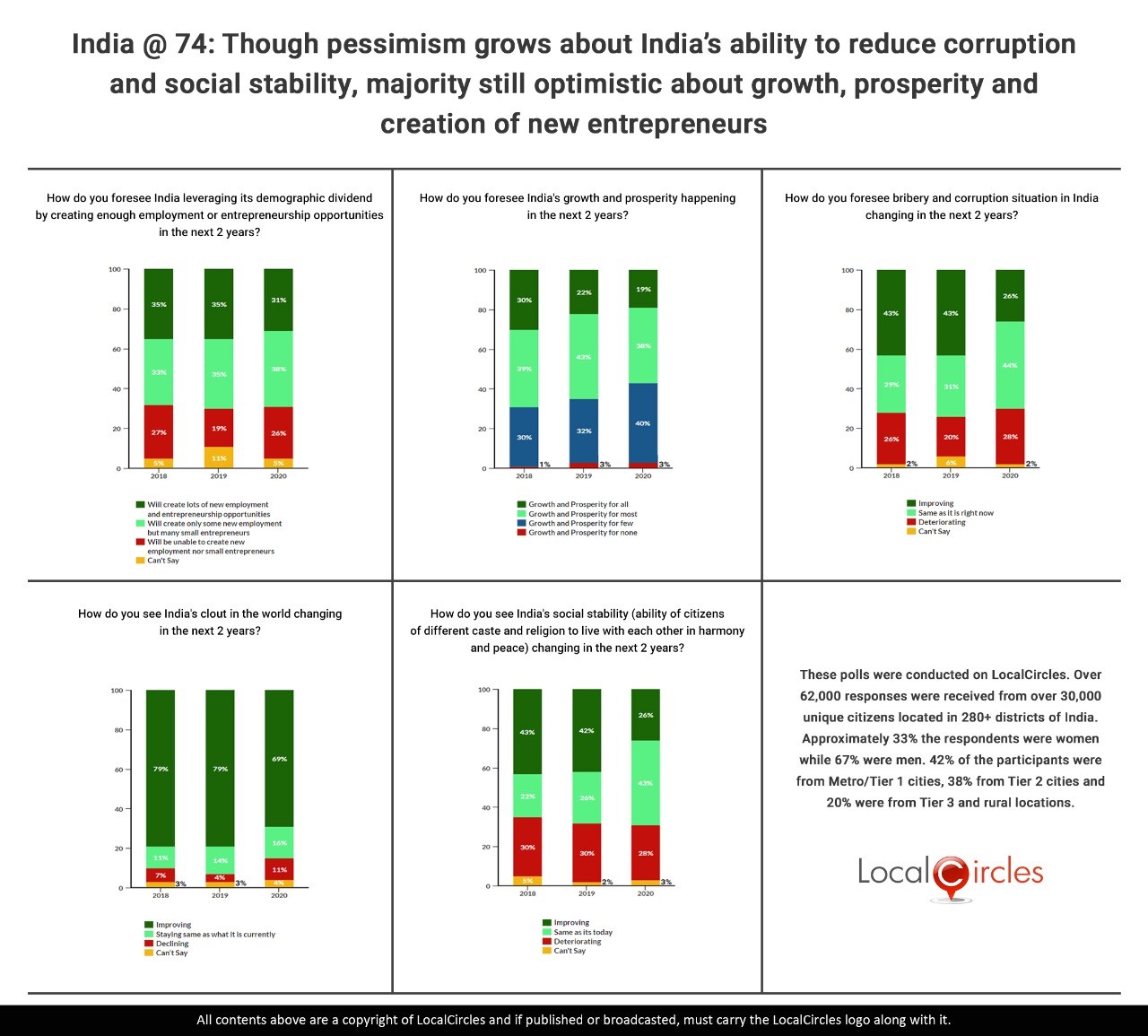