22 nd August 2018, New Delhi:The Indian economy has grown leaps and bounds in the last decade and has become a power to reckon with. With the FDI being pumped in, every large corporate wants to now manufacture and sell in India. On the other hand, the law & order situation has not improved much in the country.

LocalCircles conducted a large study in the week of India’s Independence Day and asked citizens how they foresee India delivering on key citizen parameters like growth and prosperity, social stability, livelihood, etc in the next 4 years by 2022 when India turns 75.

India @71: 69% foresee growth and prosperity for most Indians before India turns 75 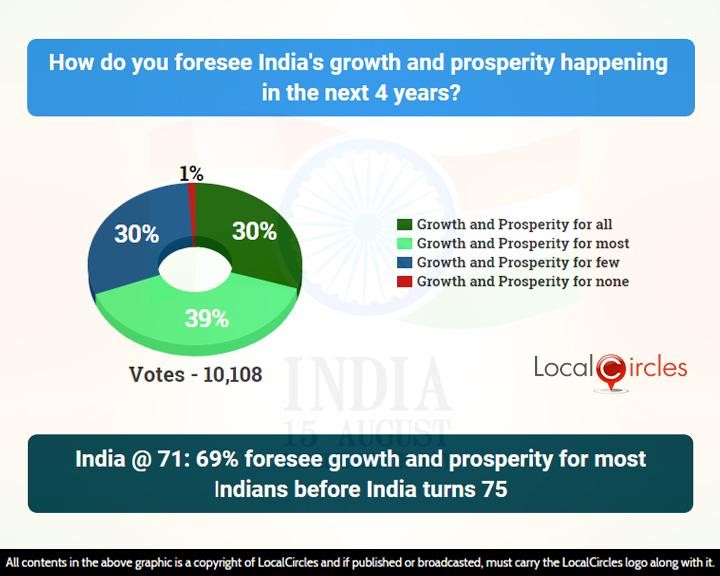 In the next question, citizens were asked how they see India’s social stability (ability of different caste and religion to live with each other in harmony and peace) changing in the next 4 years. 43% said they see it improving and 22% said they see it staying the same as today. 30% see it declining while 5% were unsure.

India @ 71: Only 43% citizens believe India will be able to improve social stability before it turns 75 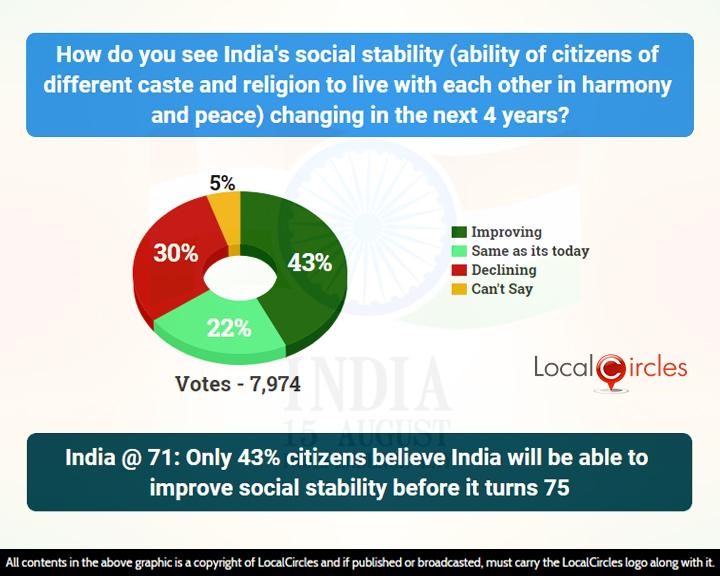 In the third question, citizens were asked how they see India’s clout changing in the next 4 years. 79% citizens said they expect India’s clout in the world to improve before India turns 75. 11% said it will stay the same as it is currently and 7% said it will decline.

India @71: 79% citizens expect India’s clout in the world to improve before India turns 75 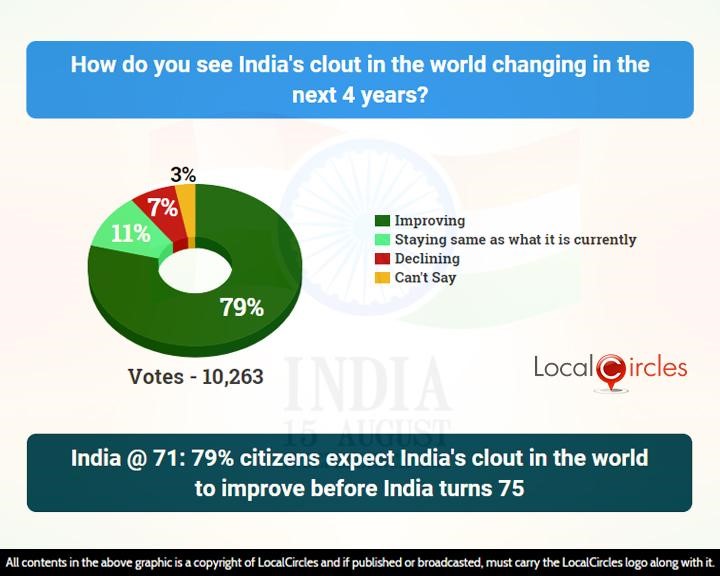 India @71: 68% citizens feel India will be able to leverage its demographic dividend by creating enough employment or entrepreneurship opportunities in the next 4 years 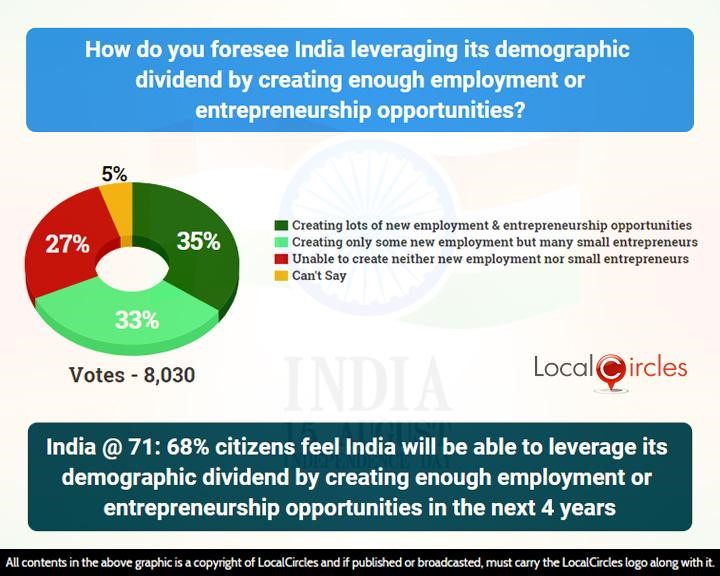 India @71: Only 42% citizens believe India will be able to improve safety of its women and children before it turns 75 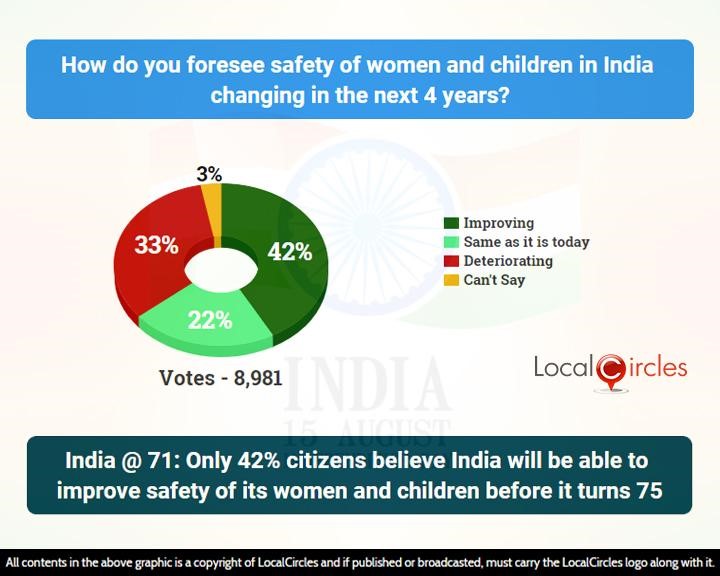 Cases of abuse and rapes of women and children are reported everyday from across the country. The government will have to make some significant changes to policy and laws, their enforcement and work closely with the judiciary on fast justice to ensure speedy justice in such cases.

India @71 : 43% citizens feel bribery and corruption will reduce in India before it turns 75 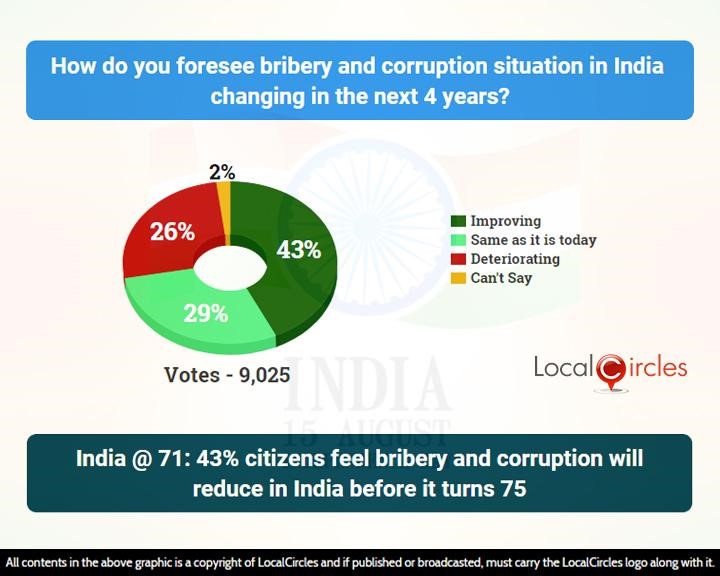 The final question asked how they foresee bribery and corruption situation in India changing in the next 4 years. 43% said they see it improving while 29% said it will be same as it is today. 26% said they see the situation deteriorating.

Increase in number of digital transactions, system and unique identification and system-based delivery of citizen benefits and subsidies, a single taxation system are all ways that have helped in reducing corruption and will continue to deliver benefits in the coming 4 years. At the same time, lack of proper anti-corruption agencies at state and local levels, ineffective public grievance systems for corruption issues and slow judicial systems all come in the way of India’s ability to fight corruption.

The new anti-corruption law 2018 provides for imprisonment from 3 to 7 years and a financial penalty for those convicted of taking bribes, while the ones found to be guilty of giving bribes can be punished with imprisonment up to 7 years or fine, or both. While this might help as there is a deterrent on both sides now, it also has a new clause where before an investigation agency can investigate a public official, they require approval of an authority which can take up to 4 months in some cases. In some cases, the states do not have a Lokayukta so who will provide this approval is still unclear. 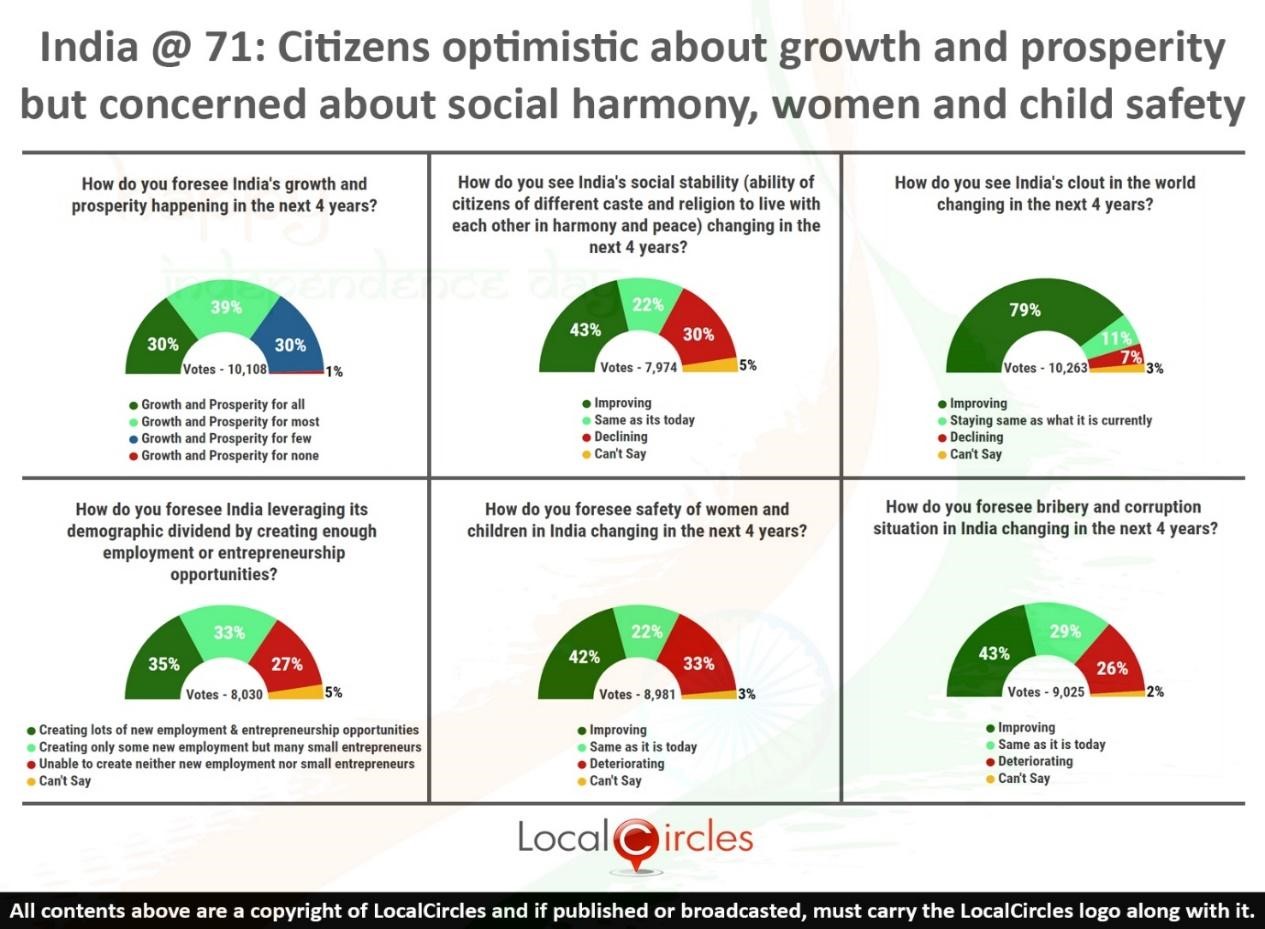 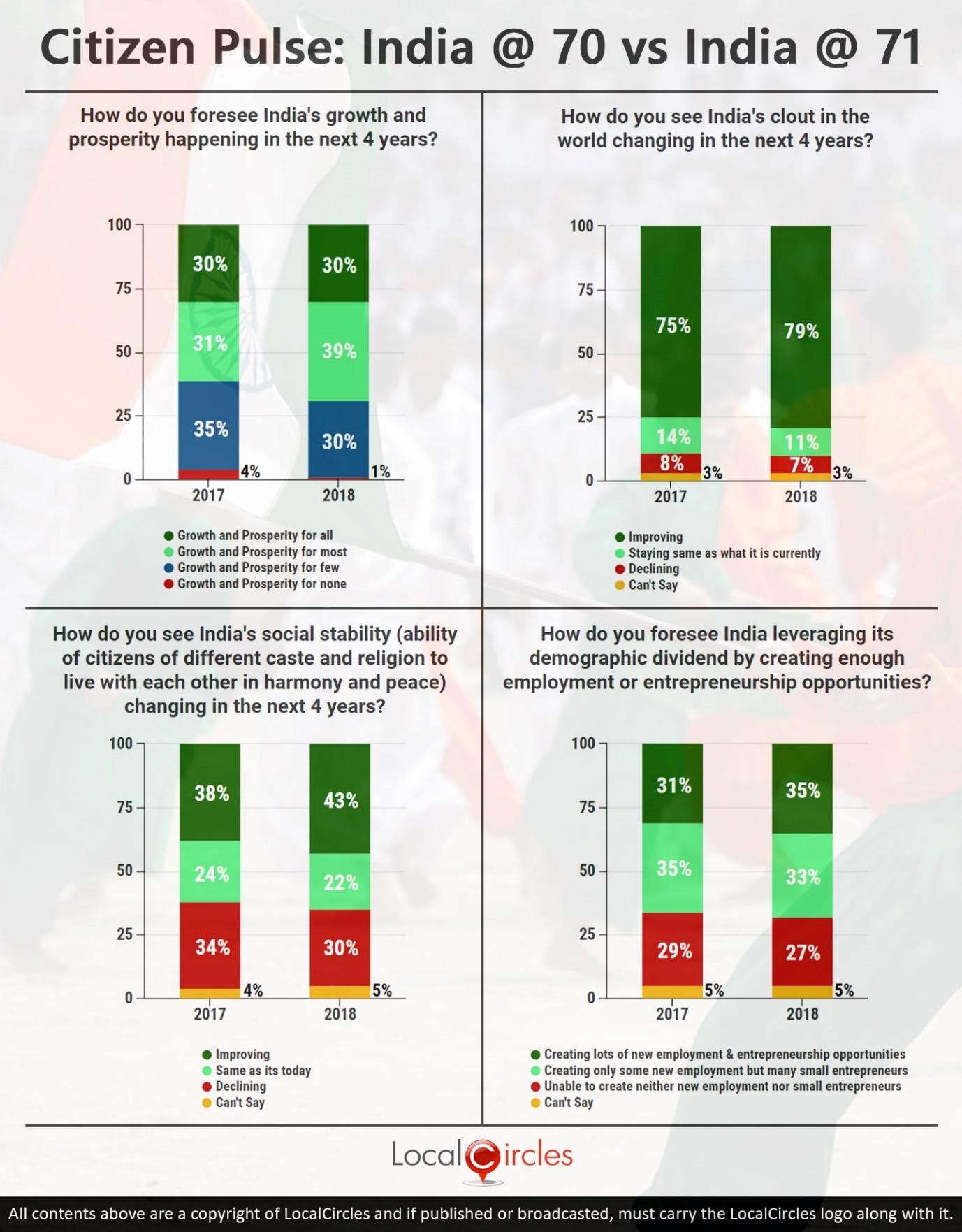 Below is a quick overview of how the comparison of citizen outlook at 70th and 71st year of Independence looks like:

India’s clout in the world

Last year, 75% citizens saw India’s clout in the world increasing, while this year 79% see it increasing.

38% in last years survey saw the social stability in India improving. The number has gone up to 43% this year. The percentage of people who saw the situation declining has gone down from 34% to 30% this year.

This year’s number were almost the same as last year’s. the number which said India will create a lot of new jobs and entrepreneurship opportunities increased from 31% to 35%, while there was a reduction of 2% in the percentage of people who said India will not be able to do either of them.

Over 54,000 responses were received from over 22,000 unique citizens located in 215 districts of India. Approximately 35% the respondents were women while 65% were men. 42% of the participants were from Metro/Tier 1 cities, 36% from Tier 2 cities and 22% were from Tier 3 and rural locations.