November 30, 2021, New Delhi: Retail prices of vegetables, especially tomatoes have surged at painstaking rates across states of India as supplies drop due to heavy rain and flash floods, upsetting homemakers to manage their domestic budget at a time when the earnings of many households across the country have been hit due to the ongoing pandemic. In Delhi, for instance, many consumers have reported on LocalCircles that they have paid between INR 70-120/kg for tomatoes in the last 60 days. Prices crossed INR 100/kg in other large cities like Hyderabad, Mumbai and Chennai and even in tier 2 cities prices are now over INR 70/kg. Reports of 50% price increase in prices of tomatoes have come from households across most states of India in the last 60 days

An unregulated hike in the price of both these vegetables is not new to the country. A survey released by LocalCircles in October 2020 had found that 70% of households are spending 25-100% higher on vegetables, including tomatoes. Experts, citing government data, say that the trade of these perishable vegetables in the retail market goes up at different rates across states due to several factors from disrupted supplies, unchecked trade regulation, and the high prices of diesel that crossed INR 100 in many states before excise duty by Center and VAT rate cut by several State Governments were announced in early November. LocalCircles has regularly been escalating citizen inputs on measures needed to lower the petrol and diesel prices to both Central Government and State Governments.

With many posts and comments received from household consumers across India on the issue of rising tomato prices, to understand how much households are spending on average to purchase a kilogram of tomato, LocalCircles conducted another nationwide survey. It also tried to understand the average amount most households paid this year for buying it as compared to 2020. Further, it tried to understand from households how they generally procure tomatoes and other vegetables. The survey received more than 19,000 responses from citizens across 303 districts of India. Of which, 41% were from tier 1, 33% from tier 2, and 26% respondents were from tier 3, 4 and rural districts. 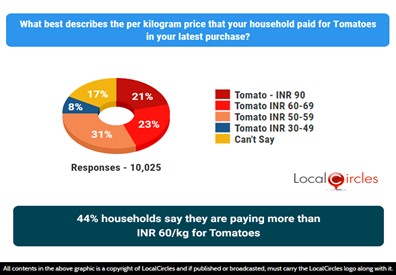 Data analysis of respondents indicates that price paid by most households in large or tier 1 cities was INR 100/kg while it was on average INR 70/kg in tier 2 & 3 cities. Households in smaller towns and rural locations paid between INR 50-60/kg.

In a similar study conducted by LocalCircles in September 2021, the average retail price highest percentage of households paid per kg of tomato in India was INR 60, which has increased by 25% to INR 75 in 2 months. 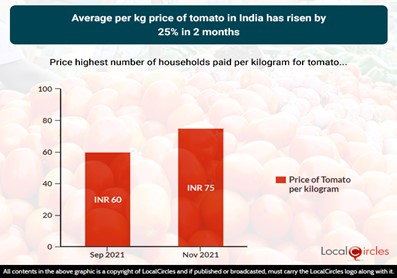 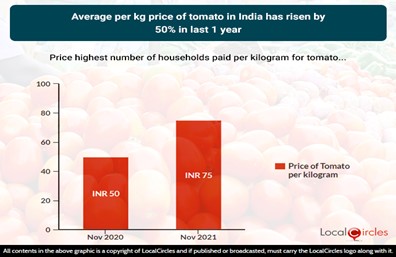 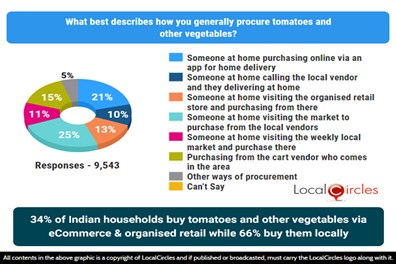 Data analysis of respondents shows households that bought via organised retail and ecommerce channels paid 10-20% higher prices than those who bought via local markets.

In summary, 44% of Indian households in the survey said they are paying more than INR 60/kg for tomatoes and on average these respondents paid a price of INR 75/kg. The average price paid by the highest percentage of households was INR 60 per kg in September 2021 and INR 50 per kg in November 2020. This indicates how the average Indian household is feeling the pinch with rising tomato prices. The need of the hour for Central and State Governments to consider if they can improve supplies of tomatoes and any other vegetables that are experiencing unusual price increases.

This survey is part of a continuous effort by LocalCircles to bring authorities’ attention to issues of common citizens so actions can be taken to improve the on-ground situation.

The survey received more than 19,000 responses from citizens across 303 districts of India. Of which, 41% were from tier 1, 33% from tier 2, and 26% respondents were from tier 3, 4 and rural districts. The survey was conducted via LocalCircles platform and all participants are validated citizens who had to be registered with LocalCircles to participate in this survey.