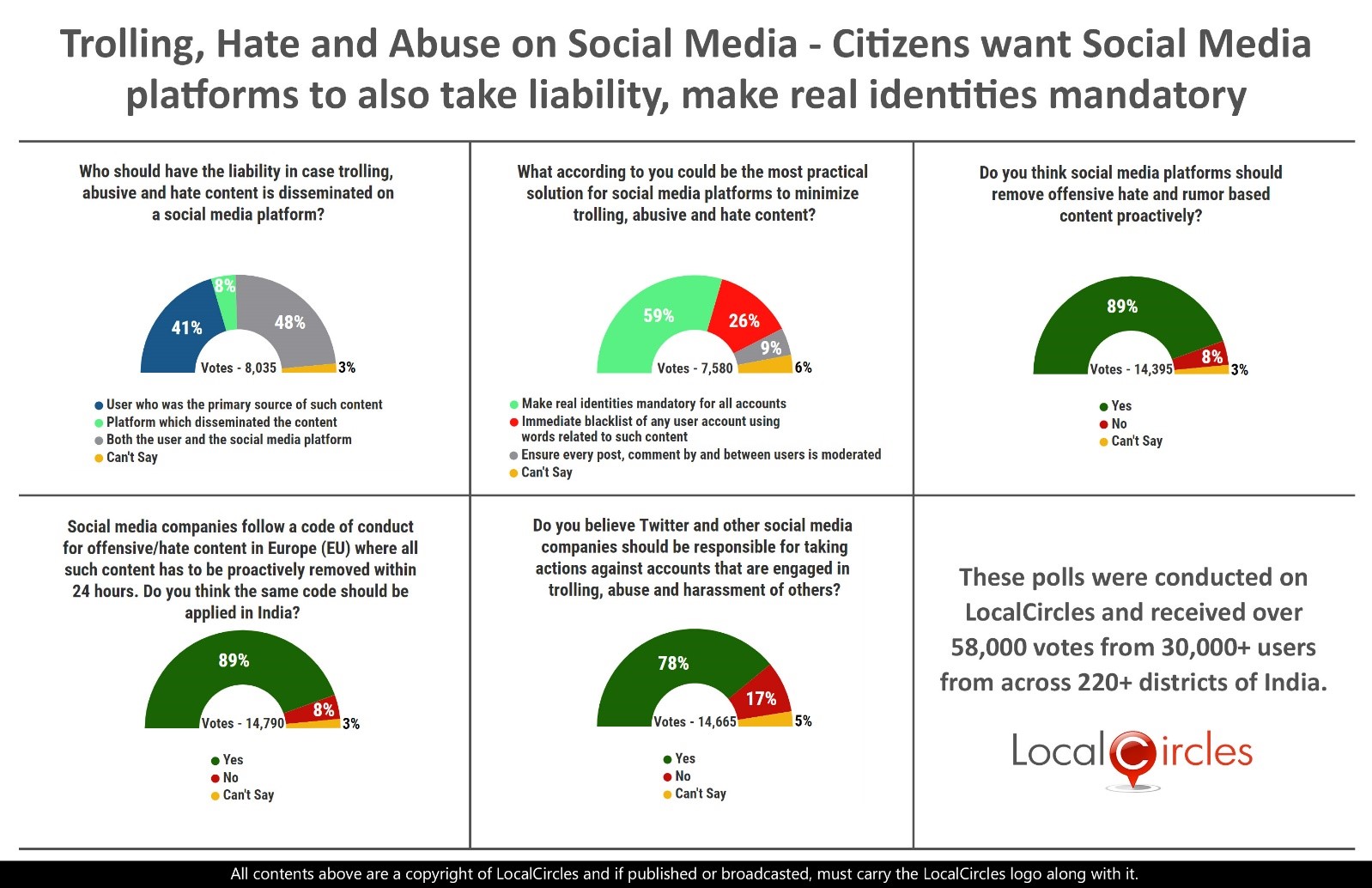 4th Dec, 2019, New Delhi: Over the last 3 years, we have seen hundreds of cases of abuse, sexual harassment, hate, trolling on social media in India, many of those against women. Politicians, Celebrities, Media persons as well as common citizens have been victims of such attacks, some of which have included even threat to life.

The subject of how social media should be regulated has been under discussion in various circles on the LocalCircles platform since late 2015, when Facebook was propogating the idea of FreeBasics as a model to provide free internet in India. It has conducted detailed surveys to find public pulse on the issue and is making a submission to the Parliamentary Standing Committee on Women Empowerment this week.

The survey questions in this exercise were based on feedback from citizens int he consultation. In the first question, people were asked what according to them was the most practical solution for social media platforms to minimize trolling abuse and hate content. 59% said real identity should be made mandatory for all accounts and 26% said immediate blacklisting should be done of any user account using words related to such content. 9% said it should be ensured that every post, comment by and between users is moderated while 5% were not sure. 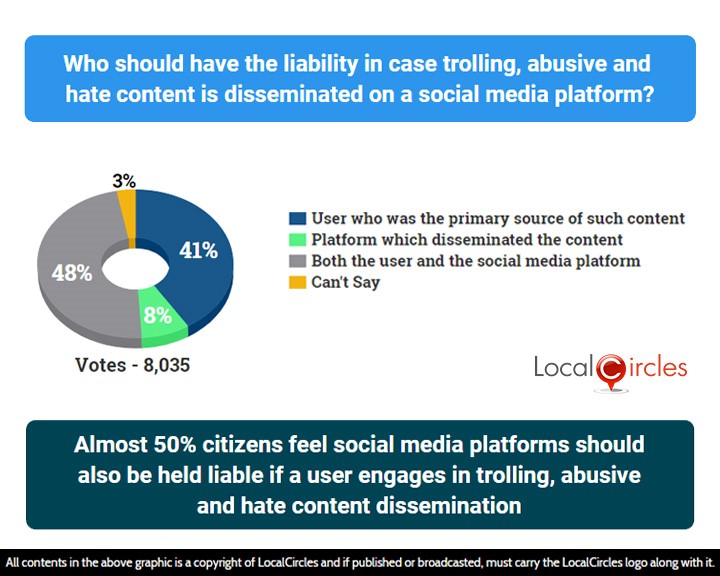 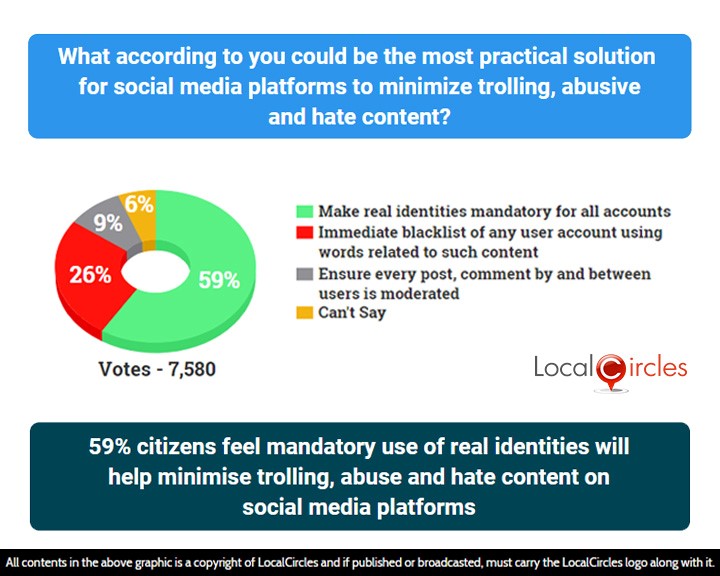 When asked if the social media platforms should remove offensive, hate and rumour-based content pro-actively, a huge 89% answered in an affirmative. Meagre 8% citizens disagreed with it and 5% chose not to answer. 14,395 responses were received in this poll. 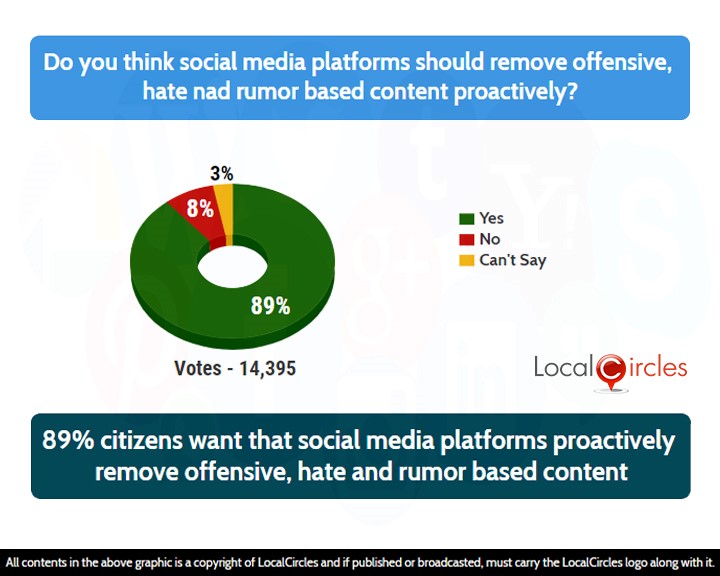 89% citizens also said that social media companies should follow a code of conduct similar to EU in India. Only 8% did not agree with it 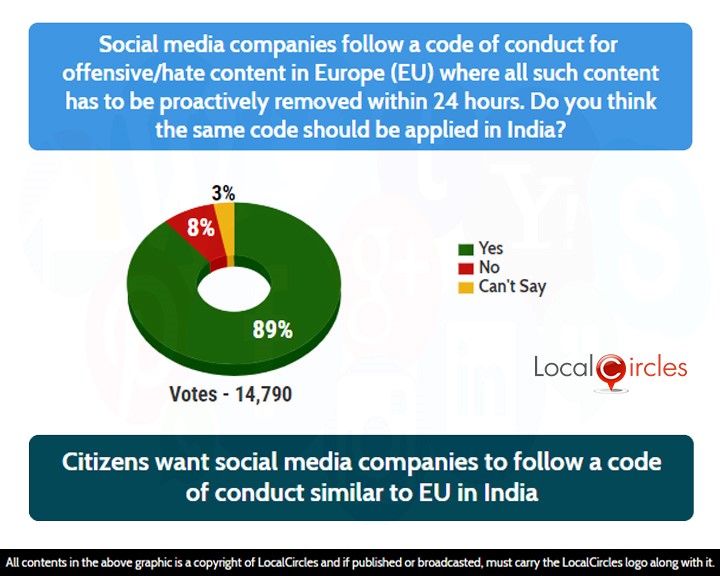 In the next poll, when asked if platforms like Twitter and Facebook should be responsible for taking action against accounts that are engaged in trolling, abuse and harassment of others, 78% citizens agreed with it while 17% said it should not be done. 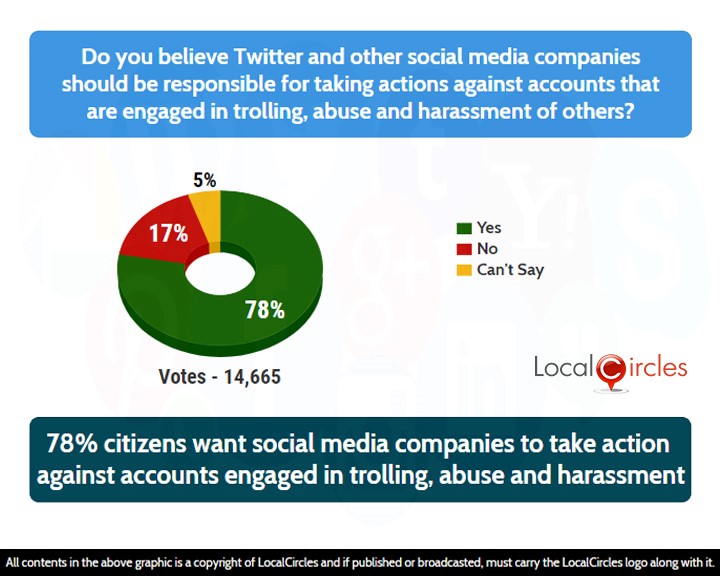 The Government last year warned WhatsApp to take urgent steps to prevent spread of abusive and irresponsible content which become viral and provokes case of violence in the country.

Citizens also made several recommendations to prevent unhealthy trolling on social media in India like algorithms being implemented to constantly moderate the user content, members being warned for hate/offensive comments leading to account suspension of repeat offenders, anything spreading against nation/nationalism to be caught and reported immediately and people should be educated that freedom of expression is important but it should not lead to rumour mongering, character assassination and meaningless speculation.

Over 58,000 responses were received from over 30,000 unique citizens located in 220 districts of India. Approximately 33% of the respondents were women while 67% were men. 48% of the participants were from Metro/Tier 1 cities, 31% from Tier 2 cities and 21% were from Tier 3 and rural locations.

The EU regulation details are available at http://europa.eu/rapid/press-release_IP-16-1937_en.htm