59% consumers have limited or no trust in their jeweller, 94% support the decision of making Hallmarking mandatory

The Central Government recently approved the proposal to make BIS hallmarking mandatory for gold jewellery. The Bureau of Indian Standards has roped in IIT Bombay to digitise the Hallmarking process, which will take about 6-12 months to be completed. With Dhanteras and Diwali fast approaching and Indians gearing up to buy gold, LocalCircles has conducted a large survey to ascertain the need, importance and awareness about jewellery hallmarking amongst consumers in India. The survey received more than 56,000 votes from around 20,000 unique consumers from across India. In the first question, people were asked if they look for a hallmark while buying gold jewellery. 79% said yes and 16% said no.

79% of those consumers who buy jewellery, look for the hallmark 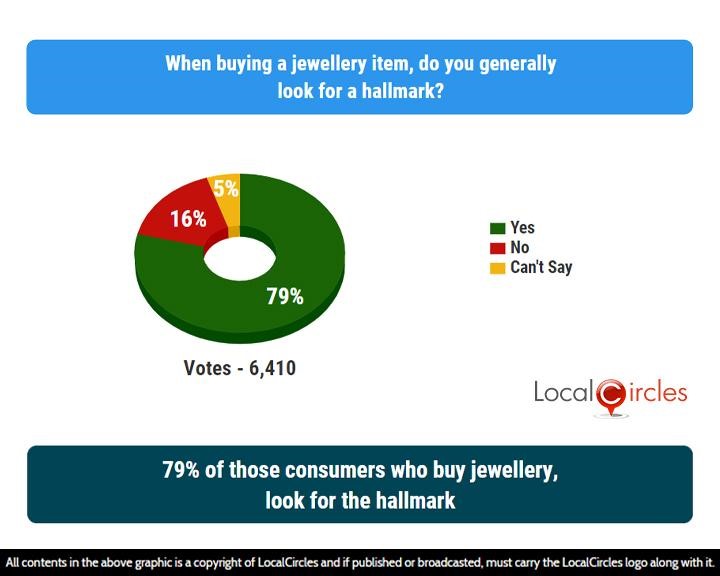 India has traditionally been one of the largest consumers of gold in the world. Be it for a marriage or just for the purpose of investment, buying gold is high on the wish list of an average Indian, especially women.

85% consumers who buy jewellery say they take a receipt 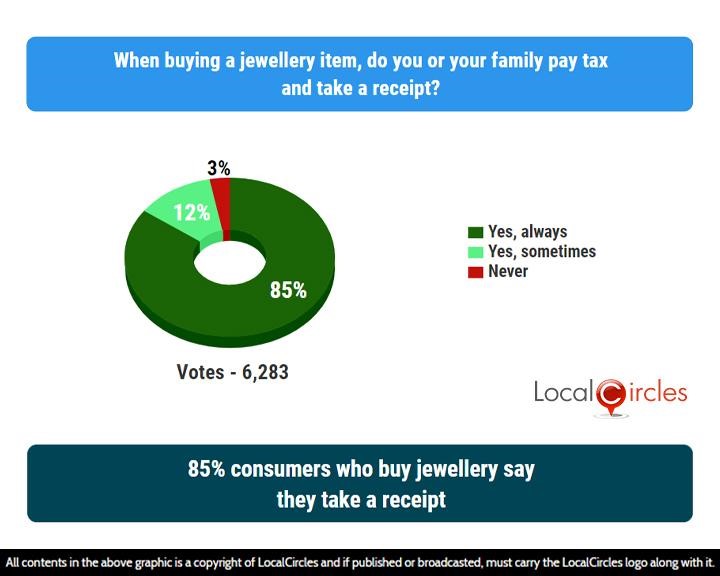 In the next question, people were asked if while buying gold jewellery, do they or their family pay tax and take a receipt. 85% said ‘yes, always’, and 12% said ‘yes, sometimes’. 3% said they never ask for a receipt.

Consumers usually do not ask for a proper bill while buying jewellery so that they do not have to pay the GST and hence get to save some money. What they do not understand is that many jewellers use this fact to cheat the customer and provide them with lower purity jewellery as in the absence of a bill, the customer will not have any proof to hold them accountable. 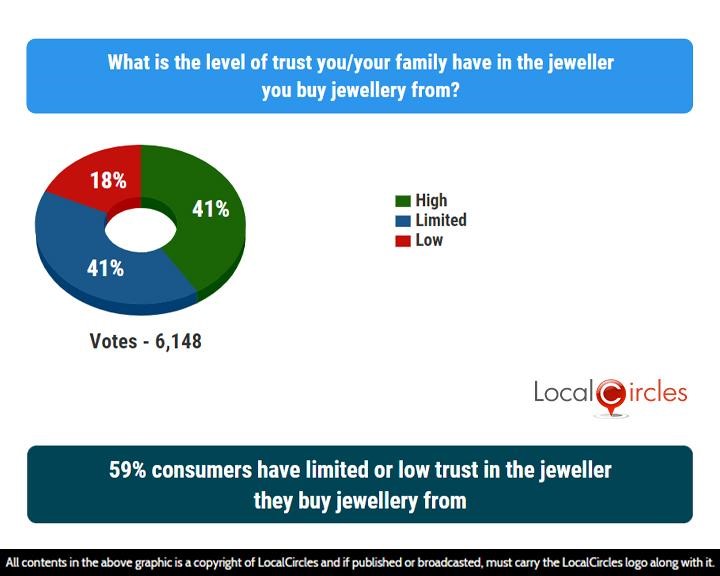 The jewellery business is built on the foundation of trust and most of the females in households have their trusted jewellers from whom they have been buying gold jewellery for many years. But looking at the number of complaints that have been coming in lately, this trust seems to be dwindling. 41% consumers in the following question said they/their family have limited trust in the Jeweller they buy jewellery from while 18% said they have limited trust. 41% said they have high trust in their jeweller.

The decision of making hallmarking mandatory as got mixed responses from jewellers from across the country. Some have welcomed the decision while many have said that the existing 800 hallmarking centres in India are not enough for such a decision and will make jewellers wait to get their articles hallmarked for days, leading to an impact on their business.

48% consumers say they have been cheated by a jeweller 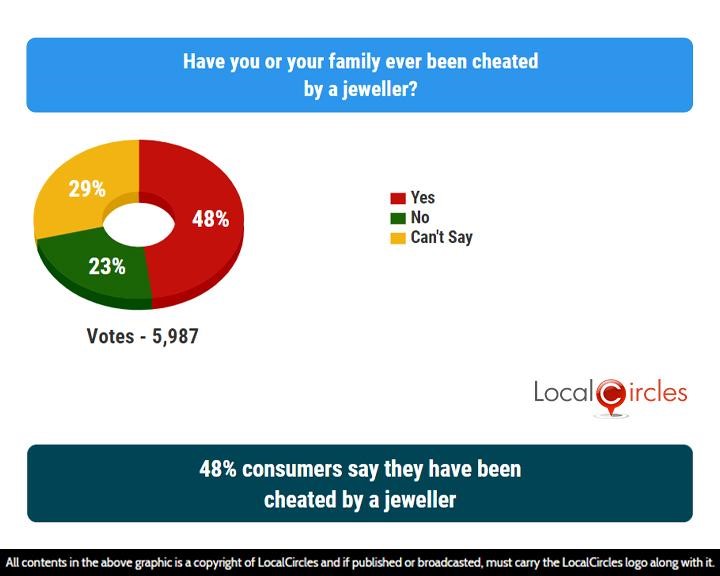 People consider gold jewellery a long-term investment. Most of the time, people only come to know that they were cheated by their jeweller years after the purchase when they go to sell/exchange their gold jewellery.

48% in the next poll said they/their family has been cheated by a jeweller in the past while 23% said they have never been cheated. 29% were unsure about it. 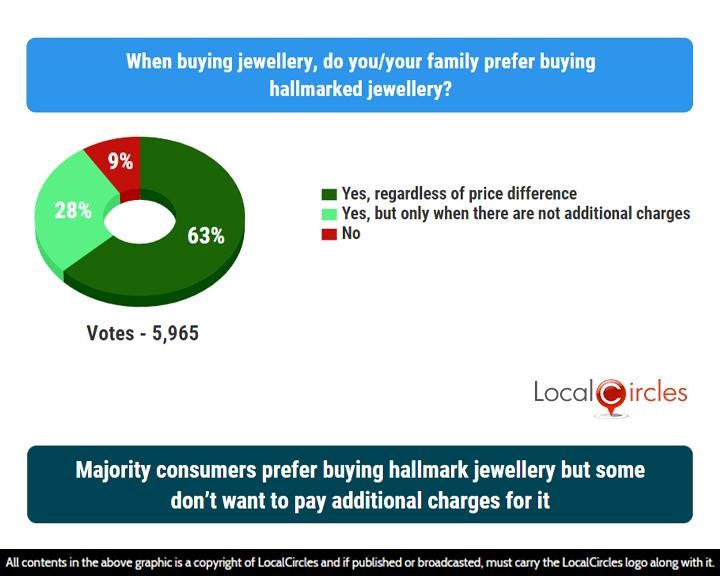 Consumers buy non-hallmarked jewellery due to lower price, ease of availability or lack of hallmarking awareness 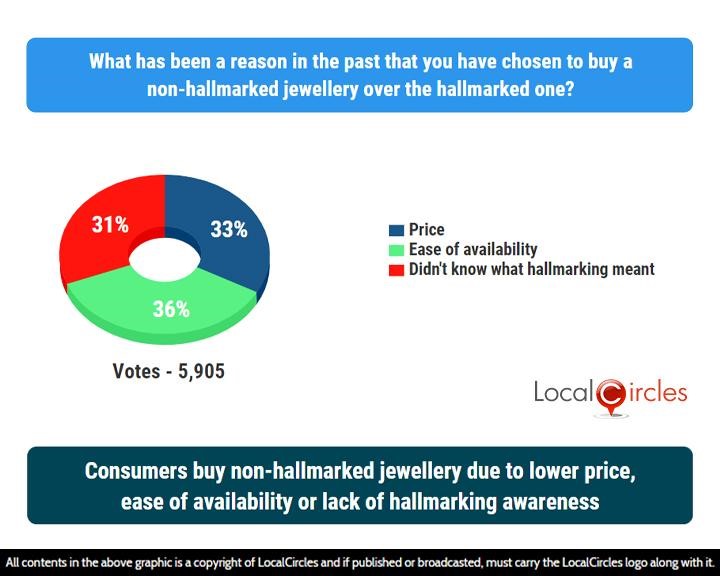 Jewellery buying is an important decision as the value of goods is almost always high and a big investment for middle class. Jewellers use this fact to push non-hallmark jewellery to consumers by saying that it is of the same quality but cheaper, and that the consumer would save money.

Consumers were asked the top reasons why they have chosen to buy a non-hallmarked jewellery over the hallmarked one. 33% said price, 36% said ease of availability and 31% said they did not know that hallmarking exists.

94% consumers didn’t get their jewellery tested after buying it from a jeweller. 49% didn’t know such facility exists 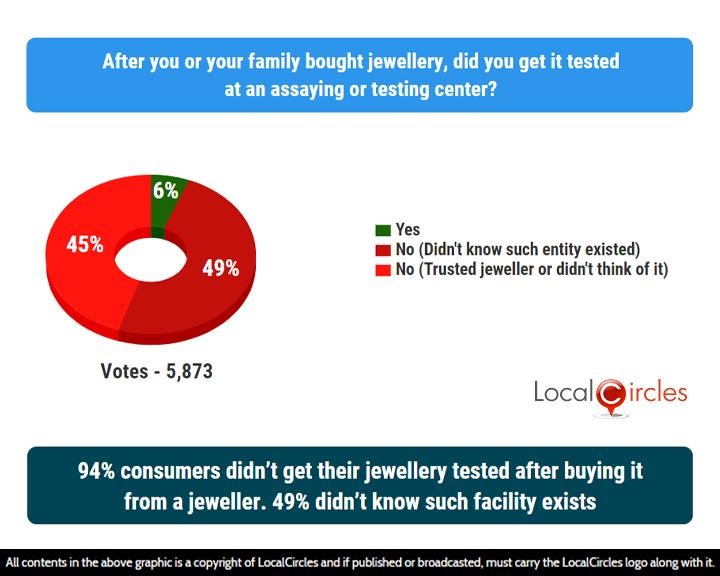 Next question asked the consumers after they bought the jewellery, did they get it tested at an assaying or testing centre. Only 6% said yes, while 49% said they were unaware that such entity existed. 49% did not do it since it was their trusted jeweller or did not think of doing it.

94% consumers say Government should make hallmarking mandatory for all jewellery 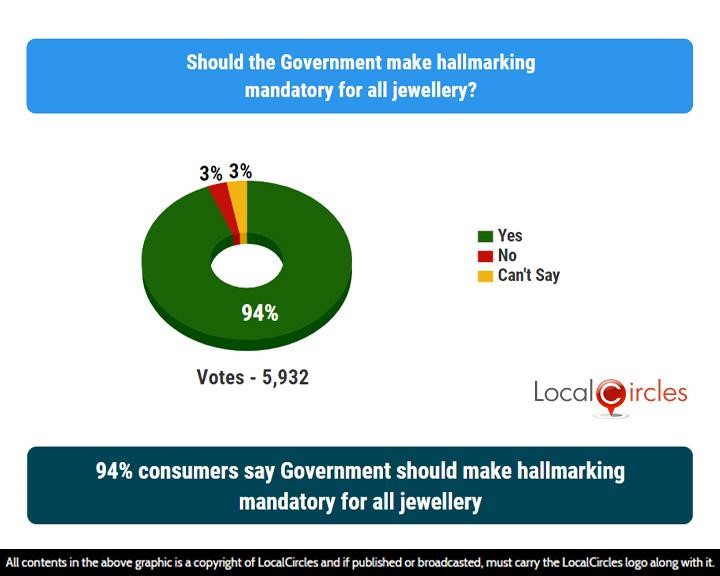 Hallmarking ensures that the interest of the consumer when buying gold jewellery, is protected to a large extent. When asked if Government should make hallmarking mandatory for jewellery, 94% said yes while only 3% said no. 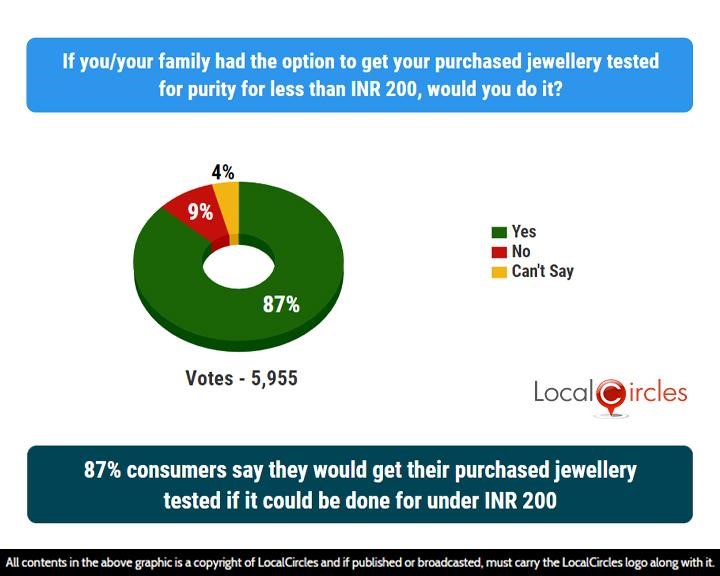 The last question asked if they had the option of getting their purchased jewellery tested for purity for less than Rs. 200, will they do it. 87% replied in an affirmative while 9% replied in a negative.

One of the key issue highlighted in discussions by LocalCircles members is the lack of awareness about jewellery testing, independent of the jeweller. BIS has hundreds of assaying centres across India, where the consumer can get their jewellery tested for purity and save themselves from being misled. LocalCircles has recommended to BIS that it be made mandatory that all hallmarking licensed jewellers are required to display the details of the 4 nearest testing centers at their counter along with the nominal testing price currently fixed at INR 35 per article. In addition, in the event that a consumer’s jewellery is found to be of lower purity there is a penalty clause that requires the jeweller to pay a penalty that is 3 times the value of the difference of amount between the purity billed and purity furnished to the consumer. LocalCircles has also recommended to BIS that every hallmarking licensed jeweller be required to display the penalty details behind their counter along with a BIS-Hallmarking email address where consumers can submit their grievances.

Another issue flagged by some consumers is that of a nexus between some jewellers and assaying centers including they being related parties. LocalCircles has recommended that the assaying center due diligence process and annual audits be designed such that such conflicts are eliminated.

A copy of this report with additional details has been furnished to BIS and the same will be shared with Department of Consumer Affairs so that may of the issues highlighted in the survey can be addressed.