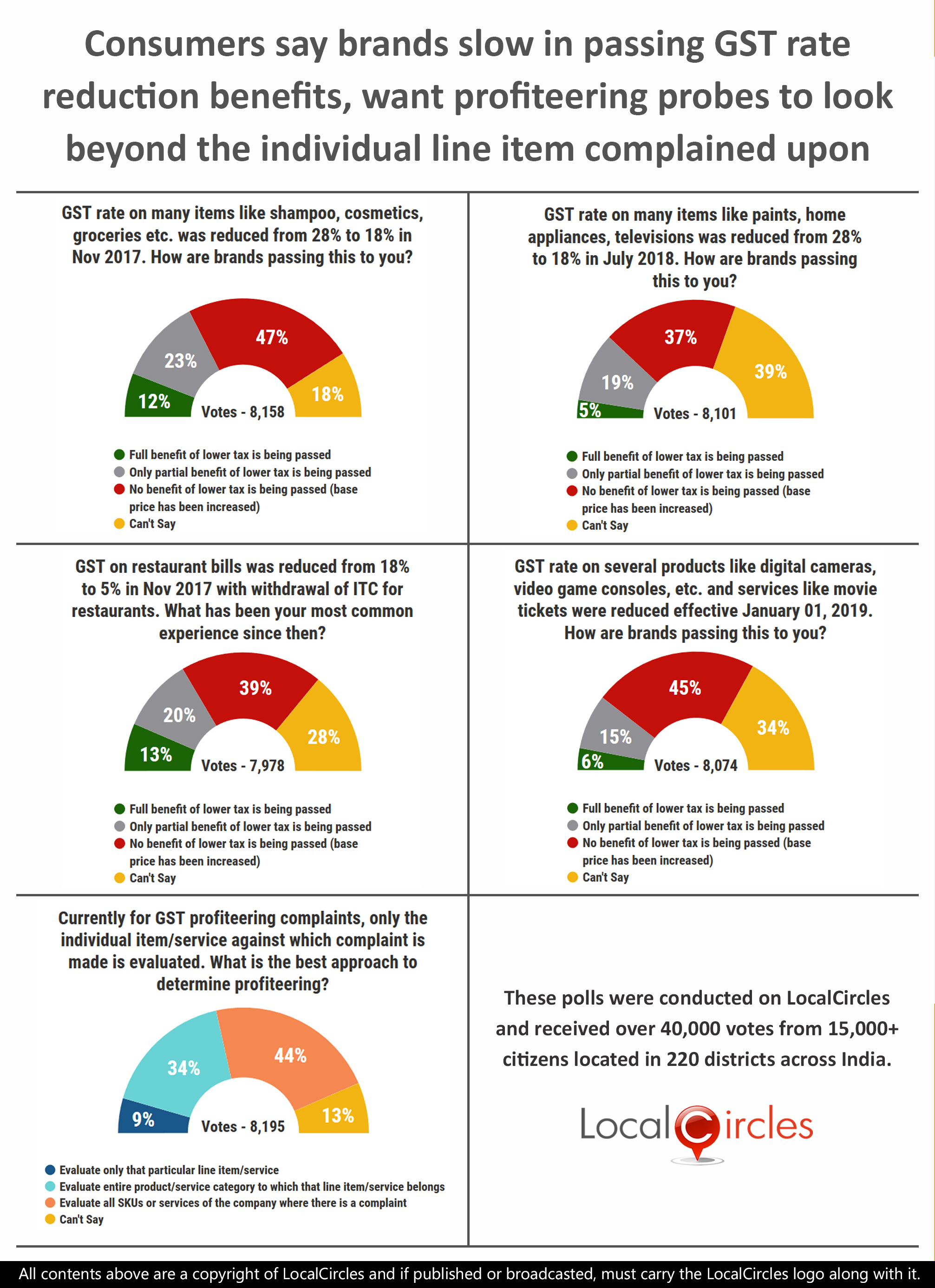 20th December 2019, New Delhi: The Goods & Service Tax was introduced with the purpose of simplifying the tax structure in the country and have only 1 tax on goods and services instead of having to deal with multiple taxes. Since then, the GST Council has met various times and reduced the applicable GST on various products and services. The sole purpose of these rate reduction was to make the purchase that much more affordable for the consumers. But many corporates were accused of not passing on the benefits of the GST rate reduction to the consumers and instead profiteered from it. National Anti-Profiteering Authority recently imposed a fine of Rs. 90 crores on Nestle for not passing on the benefit on GST rate reduction to consumers. Profiteering orders have also been issued by NAA against many other companies like HUL, Jubilant, Johnson & Johnson, Samsung, Glenmark Pharmaceuticals, etc.

The increasing number of penalty orders are also reflected in the finding of this consumer survey which LocalCircles has conducted to ascertain their perception of GST rate reduction benefits that have been passed on to them. The 5-poll survey received around 40,000 votes from 14,000+ unique citizens of the country.

The GST rate on many items like shampoo, cosmetics, groceries etc. was reduced from 28% to 18% in Nov 2017. The first question asked if the brands were passing these benefits to the consumers yet. Only 12% in response said that full benefits of lower tax are being passed while 23% said only partial benefit is being passed. 47% said no benefits of the lower tax rate are being passed on as the base price of the products has been increased. 18% were unsure about it. 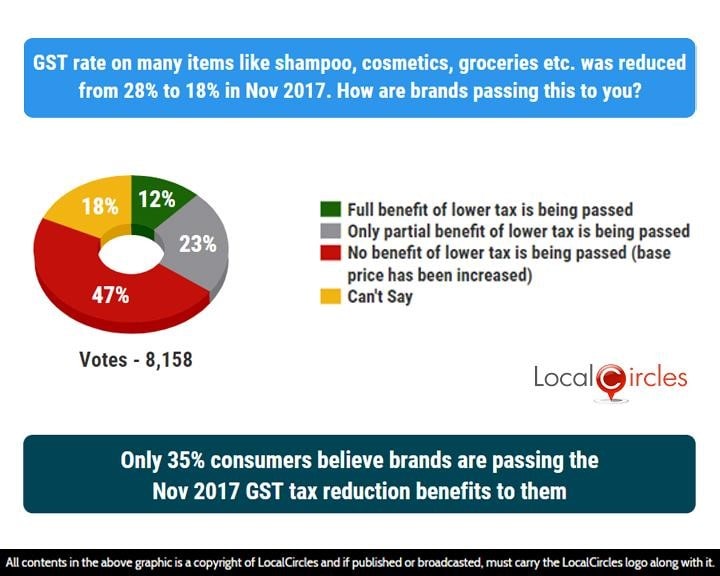 The comparison of the various pulse checks conducted between June 2018 and December 2019 also corroborate the findings and shows while more brands are now passing benefits of reduced GST rate to consumers, majority are still profiteering. The good news is that the percentage of consumers who said GST reduction benefits were being passed on which stood at 15% in June 2018, has now increased to 35%. 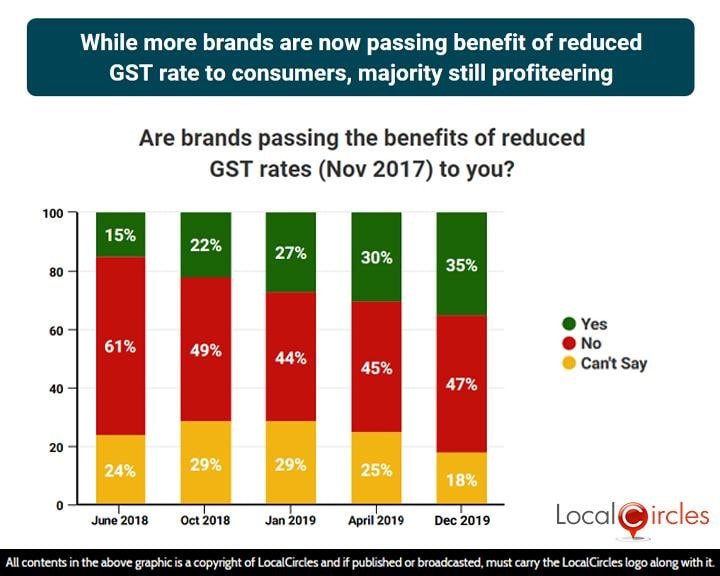 The Director General of Anti-Profiteering which is the investigation arm of National Anti-Profiteering Authority, has summoned many Indian and multinational companies for GST profiteering over the last couple of years. Companies like Nestle, Hindustan Unilever, Jubilant Foodworks, P&G India, Hardcastle Restaurants (McDonald’s South & West) and many real estate developers have been fined heftily by NAA for GST profiteering and not passing on the benefits of reduced GST rates to consumers. 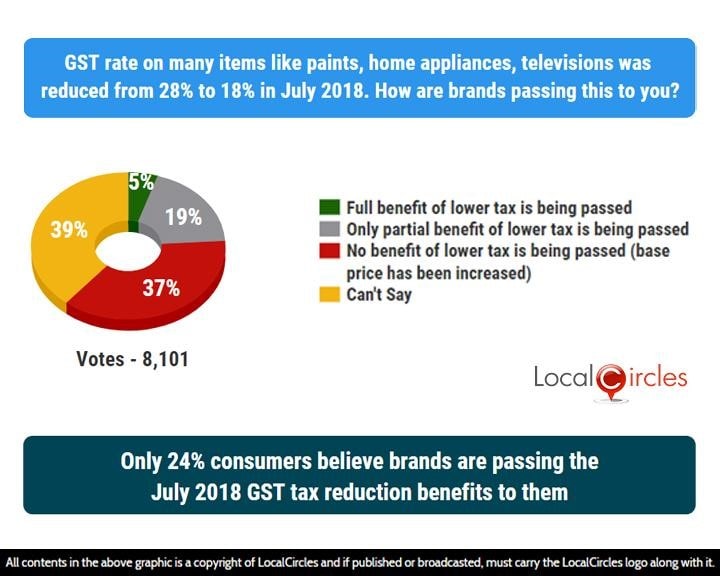 When a comparison of the various pulse checks on the July 2018 GST rate reduction was done, the numbers showed a similar story. Only 20% consumers in October 2018 said benefits of GST rate reduction were being passed on to them. In one year (as of Dec 2019) this number hovers around the 24% mark showing limited improvement. LocalCircles will be urging the NAA to put special focus on categories where rate reduction was brought in effective July 2018. 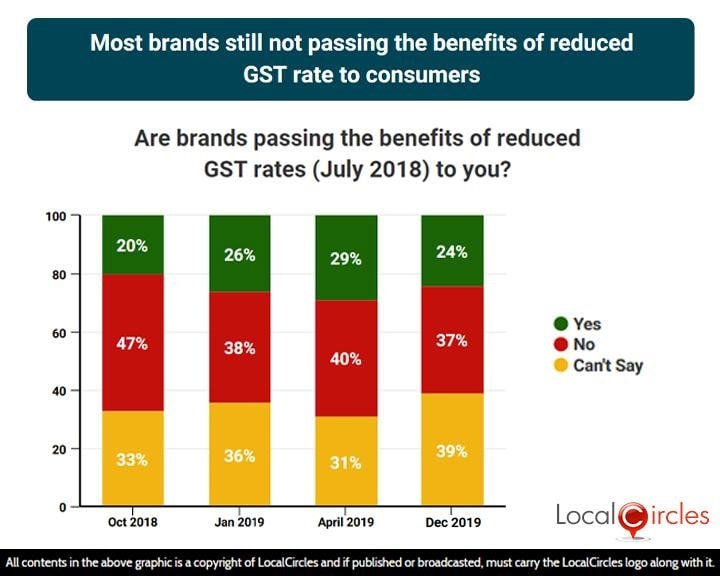 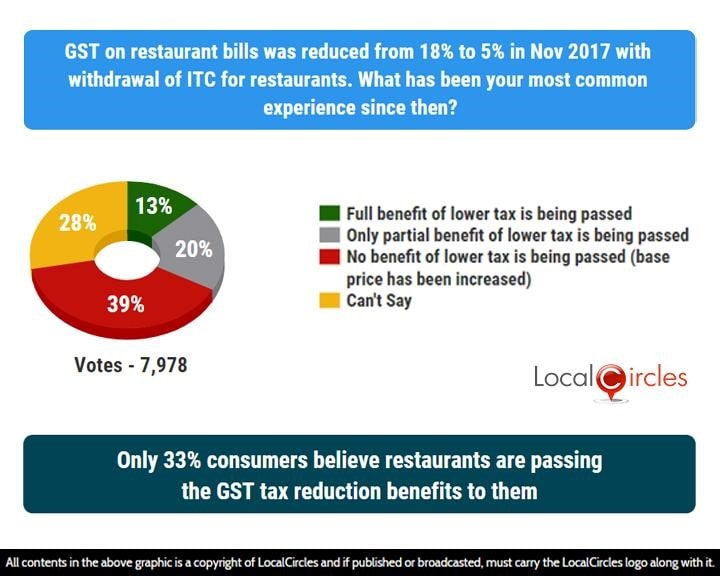 Consumers reported that the reduction in GST on restaurant bills has not benefited them too much as many restaurants have increased their base prices. 28% consumers in June 2018 had said that GST rate reduction benefits were being passed on to them by restaurants, while in the December 2019 pulse check, this number showed a slight improvement and stood at 33%. Restaurants however claim that since they have lost the Input Tax Credit benefit, they only have a certain room to reduce prices. 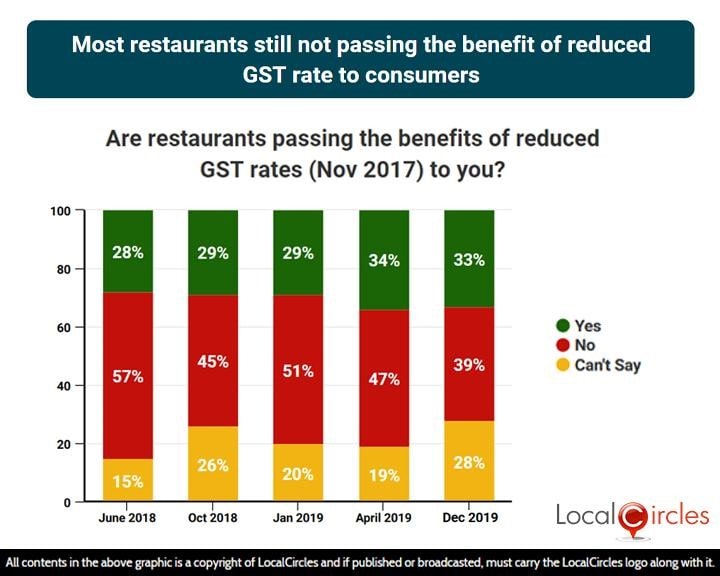 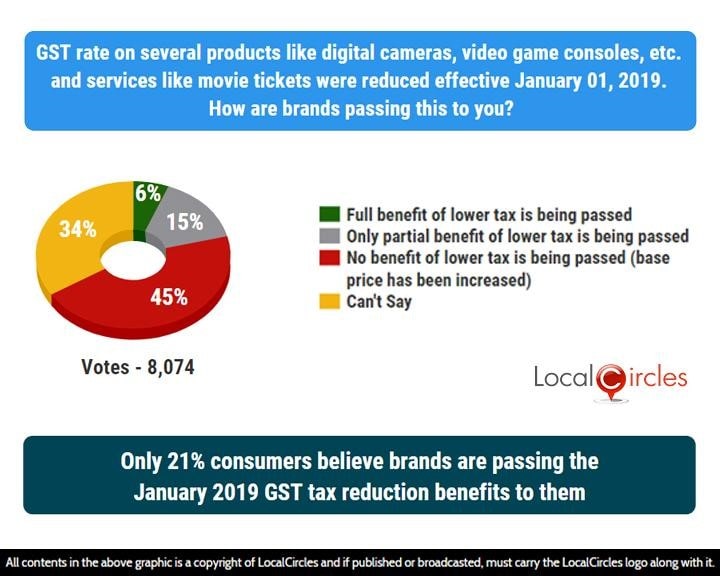 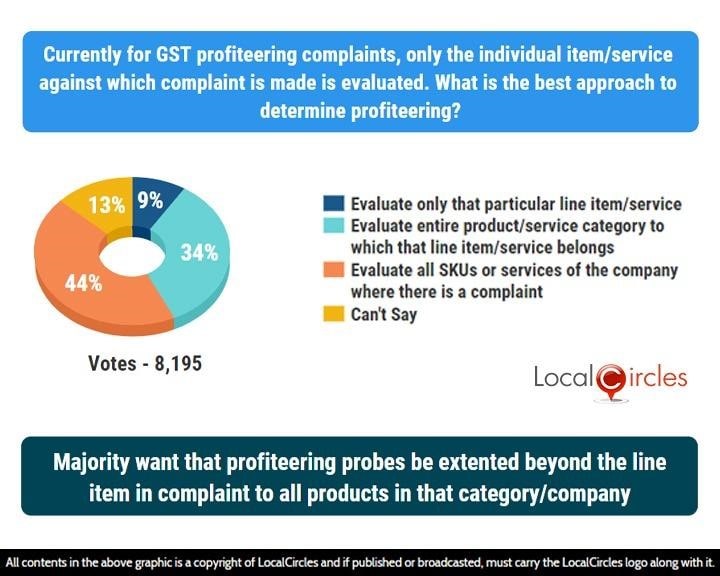 The GST Act clearly states that “Any reduction in rate of tax on any supply of goods or services or the benefit of input tax credit shall be passed on to the recipient (consumer) by way of commensurate reduction in prices”, which goes in the favour of the consumer. On the other hand, after the poor GST collection in the month September, Governments of states like Kerala and Punjab have said that the design of the GST structure needs a re-think and a fresh outlook.

Clearly, consumers want the Government to act proactively and take Suo moto action to identify any instance of GST profiteering by companies operating in India. Amidst the talk of an economic slowdown, it is important that the corporates make an extra effort to find areas where GST rate reduction benefits could be passed on to the consumer. This will certainly ease some pressure off the large middle-class population of the country. LocalCircles will share this report with senior members of the GST Council and also the National Anti-Profiteering Authority and urge them to take swift action against defaulters.