November 26, 2021, New Delhi: The prices of clothing and footwear are likely to see a steep rise in the coming year as the Central Board of Indirect Taxes and Customs (CBIC) on November 18, notified an increase in the rate of GST for fabrics, footwear, and apparel from 5% to 12% from January 2022. This also includes woven fabrics of silk, cotton, wool, coarse animal hair, flax, etc. This is done in an attempt to correct the inverted duty structure. However, this means that the tax on individual inputs is more than the tax on finished items. Since the GST rate on garments and footwear above INR 1000 is already at 12%, the worst-hit consumers will be the ones who buy garments for lesser than INR 1000. Further, the 7% rise in tax will add a financial burden to the textile industry, raising concerns against the move. Associations have been writing to the Finance Ministry arguing that clothing is a basic need, thus being taxed at 12% is not justified.

A Fitment Committee nominated by the GST council has proposed further changes in the GST rate structure. These include raising GST slab of 5% to 7% and 18% to 20%, merging 12% and 18% slab at 15% and increasing taxes on precious metals from 3% to 5%. A survey conducted by LocalCircles in July 2021 revealed that 2 out of 3 consumers in India wanted changes to the GST rate structure. 55% of citizens were found in favour of merging GST rates of 12% and 18% into a single 15%. Separately, 68% of citizens also want the GST rate on services to be reduced with many suggesting that the high 18% rate leads most people to avoid taking a receipt for the service availed.

Taking cognisance of the Government’s proposal to increase GST rate on apparel and footwear, LocalCircles has gone back to the citizens to gain feedback regarding the same. The survey received 9,268 responses from citizens located in 311 districts of India. 67% of the respondents were men while 33% were women.

The question asked citizens if they approve of the Government’s proposed increase of GST rate from 5% to 12% on apparel and footwear from January 1, 2022. In response, only 29% of citizens said “Yes”. And 10% did not have an opinion. Majority of 61% of citizens said “No” or are against the Government’s proposal to increase the GST rate on apparel and footwear from 5% to 12%. This question in the survey received 9,268 responses. One of the top issues quoted by people in community discussions is the high inflation, prices of vegetables and FMCG essential goods that people buy. If GST rates are increased on apparel and footwear it will further put a strain on the household budgets.

In summary, citizens are against Government’s move to increase the GST rate on apparel and footwear from 5% to 12%. As the Group of Ministers meets on November 27th to discuss the changes to be made in the GST structure, citizens want their feedback to be taken into consideration. 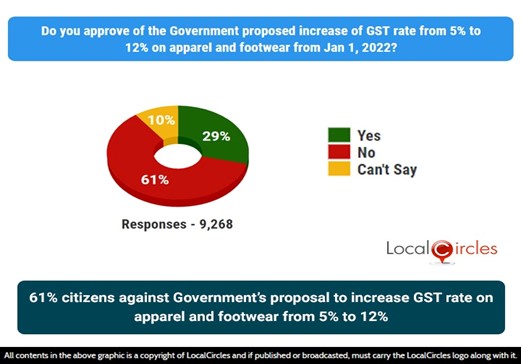 LocalCircles has gone back to the citizens to gain feedback regarding the same. The survey received 9,268 responses from citizens located in 311 districts of India. 67% of the respondents were men while 33% were women. The survey was conducted via LocalCircles platform and all participants are validated citizens who had to be registered with LocalCircles to participate in the survey.