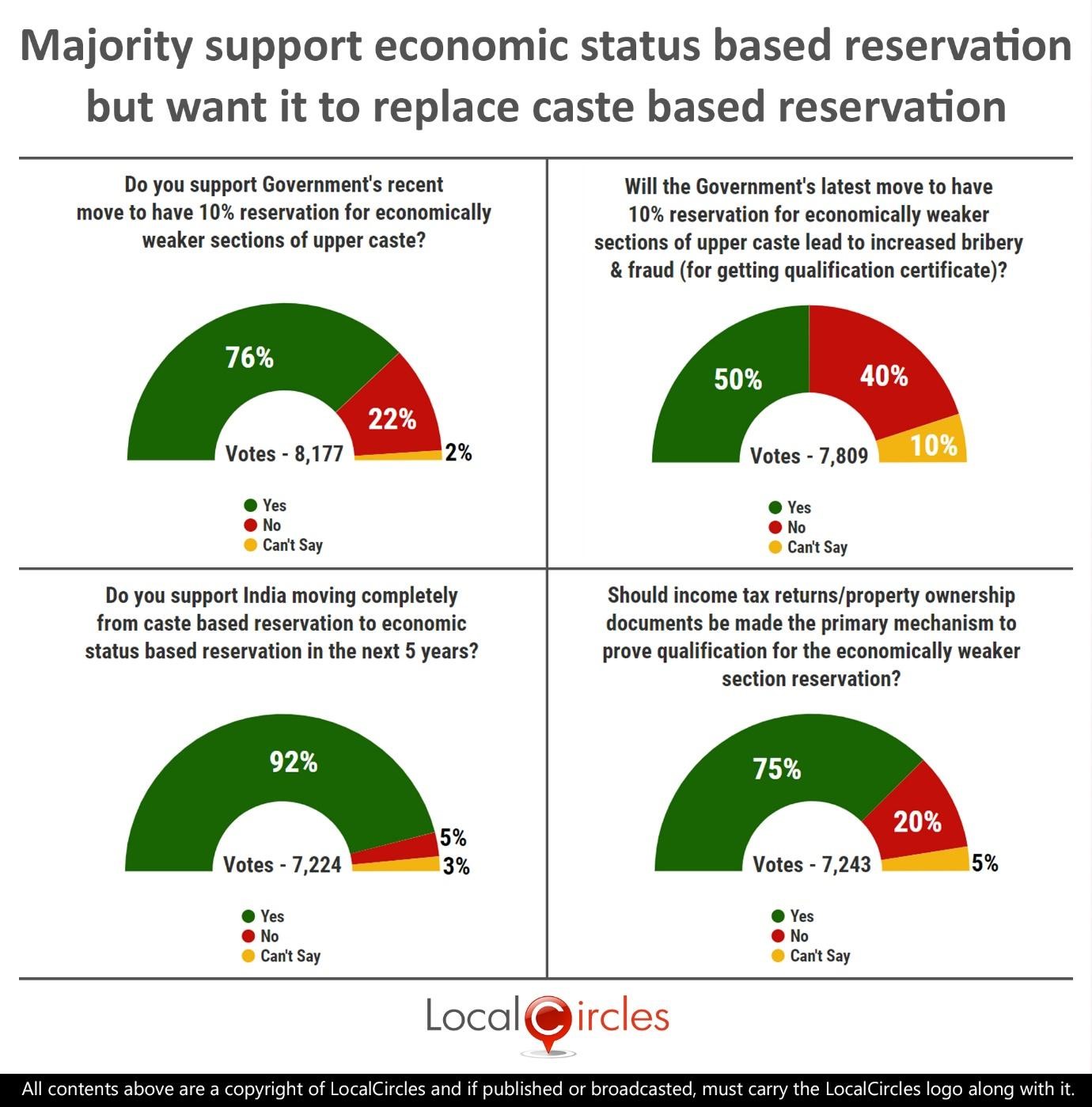 31st July 2019, New Delhi: The reservation system in India earlier only catered to the people belonging to Schedule Caste, Schedule Tribes, and Other Backward Classes. But this is not the case anymore. The 124th Constitutional Amendment was passed earlier this year creating provision of giving reservation in government jobs and education to the general category. This means that there will now be a 10% reservation for economically weaker sections (EWS reservation) of the people belonging to the general category too. Now that Modi Government 2.0 is in power, citizens have come together to give various suggestions on how the plan can be implemented better.

LocalCircles conducted a survey to check the citizen pulse on what they think about the changes in the reservation system of the country. The survey received more than 30,000 votes from over 12,000 unique citizens, spread across 200+ districts of the country 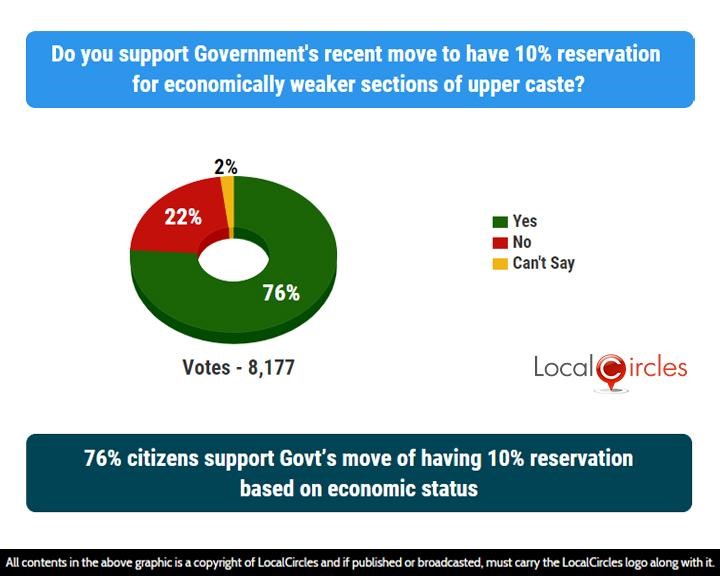 In the first poll, 76% citizens supported government’s move of having 10% reservation for the economically weaker sections of the upper caste. Only 22% voted against it.

This act will benefit all individuals of the General category whose family’s combined annual income is less than Rs 8 lakh, and who hold less than five acres of agricultural land. 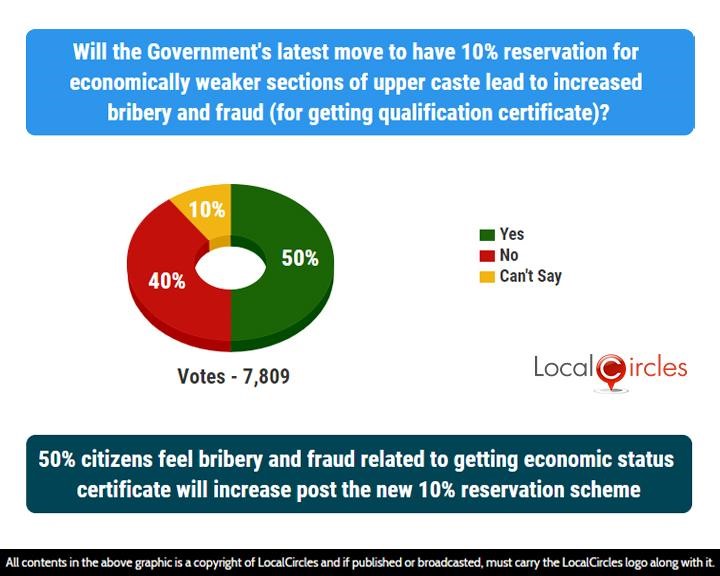 Cases of people trying to get fake qualifications and certificates to benefit from the quota system are not unheard of. Many people have been caught presenting fake certificates at job interviews and admission counseling, just so that they can get in using the reservation system.

In the next poll, citizens were asked if this move will lead to increased bribery and fraud for getting qualification certificates. 50% respondents agreed with it while 40% did not agree with it. 10% were unsure. 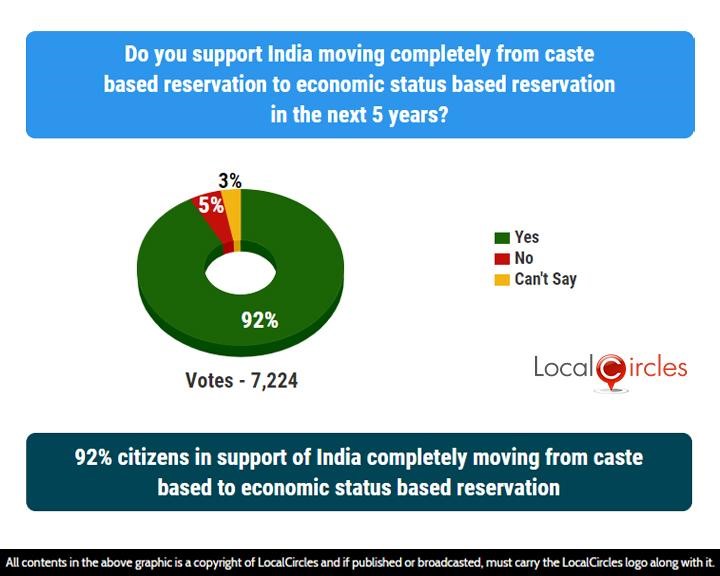 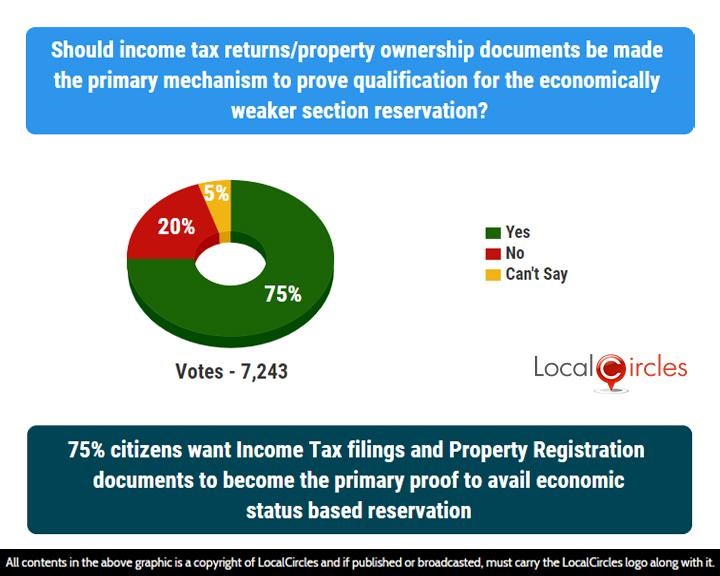 The Government must prescribe certain documents which would be used to prove the candidate’s claim of belonging to the economically weaker section of the general category. In the final poll, 75% citizens wanted Income Tax filings and Property Ownership documents to become the primary mechanism to prove qualification, to avail economic status-based reservation. 25% citizens opposed this move. Citizens also said that making income tax filings mandatory might have dual benefits as it would encourage a lot more people to pay income tax. This will certainly give a boost to the income tax collections done in the coming years.

Reservation in college admissions is also an important area that should be looked at. The new job reservation Amendments were passed by Lok Sabha and Rajya Sabha within 72 hours. Experts say that the move will directly impact the non-income tax paying economically backward classes and will give them more chances to prove their worth in the society.

Over 30,000 responses were received from 12,000+ unique citizens located in 200 districts of India. Approximately 44% of the respondents were women while 56% were men. 61% of the participants were from Metro/Tier 1 cities, 29% from Tier 2 cities and 10% were from Tier 3 and rural locations.