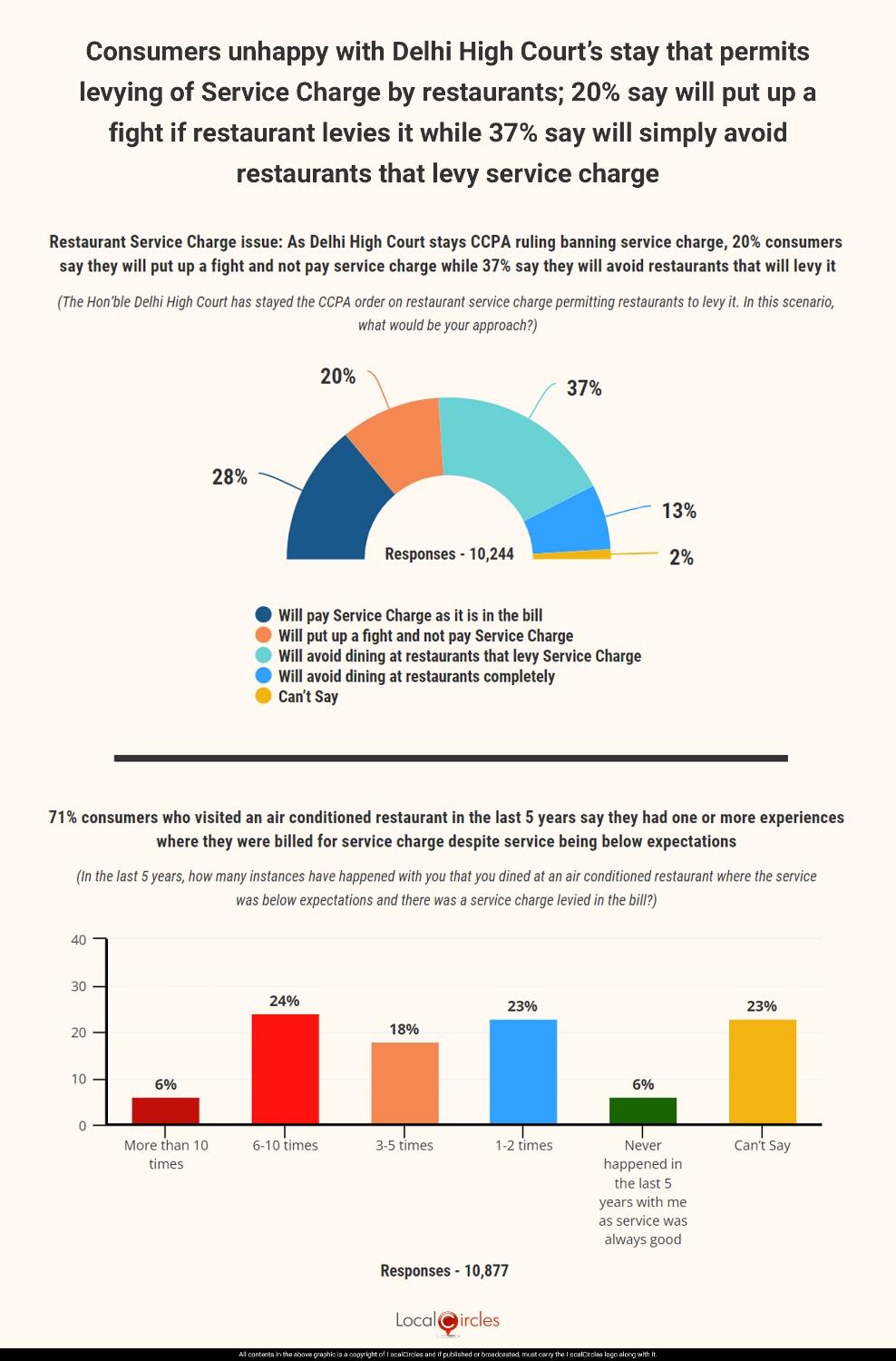 July 26, 2022, New Delhi: Just when eating out sentiment was expected to take a leap, the Delhi High Court order on July 21st putting a stay on the recent CCPA guidelines prohibiting hotels and restaurants from levying service charge automatically on food bills has come as a rude shock to consumers, reveals a new LocalCircles survey.

The high court order on a petition by the National Restaurant Association of India (NRAI) and Federation of Hotels and Restaurant Associations of India challenging the Central Consumer Protection Authority (CCPA)'s July 4 guidelines, has reopened the contentious issue of levying of service charge on consumers dining in air-conditioned restaurants.

While leaving the choice of eating in a restaurant to consumers, the HC order clarifies that the stay is subject to the members of the petitioners ensuring that the levy of service charge in addition to the price and taxes and obligation of the customer to pay the same is duly and prominently displayed on the menu or other places.

Directing the restaurants to not levy service charge on take-aways or deliveries, the HC has listed the matter for further hearing on November 25th.

In the first poll consumers were asked about their input on the Delhi High Court Stay on CCPA order and the approach they will undertake when visiting restaurants. Out of 10,244 respondents to the poll, 70% respondents revealed plans to either refuse paying it or avoiding restaurants which will levy it. The contention of consumers is that most diners in air-conditioned restaurants tend to tip the staff in the normal course according to the service quality. A breakup of those opposed to service charges shows, 20% plan to put up a fight and not pay the additional charges, 37% respondents plan to avoid restaurants that levy service charges, while 13% were planning to avoid restaurant eating. In the remaining cases, 28% expressed willingness to pay service charge if it was part of the bill while 2% respondents were undecided on their course of action. The consumer mood seems to have clearly soured. 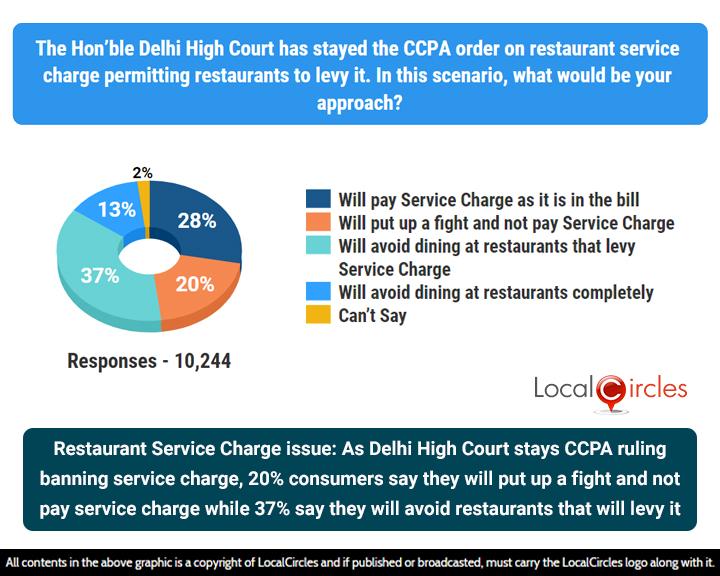 Since 2017, LocalCircles has been striving to create awareness on the issue of service charges collected by air-conditioned restaurants. The consumer community via LocalCircles also escalated the issue on multiple occasions to the Department of Consumer Affairs (DoCA), under the Ministry of Consumer Affairs, Food and Public Distribution, which resulted in the government declaring restaurant service charge as an unfair trade practice in 2017. With the issue continuing till 2020 and even post the pandemic, the Central Consumer Protection Authority or CCPA reviewed the matter once again, held discussions with the restaurant associations and on July 4th released the guidelines restricting levying of forced service charge by restaurants. Most restaurant associations maintain the position that service charge helps employees and also the consumers. However, the consumers collectively have been clear since 2017 that the biggest issue is paying service charge in situations where the service experience has not been good. Some restaurant owners maintain that these situations are rare.

To understand how frequent such consumer experiences were, LocalCircles asked consumers if they had one or more experiences like this in the last 5 years where service charge by an air-conditioned restaurant was levied in the bill but the service was below expectations. 71% respondents revealed having undergone such an experience in the last five years. Among those with poor or mediocre service experiences, 23% stated it had happened once or twice, 18% said it happened three to five times and even worse, 24% respondents revealed it had happened as many as 6-10 times, while 6% were among those who had undergone a bad service experience despite service charge being levied in the bill, more than 10 times. The sample survey reflects why majority of the consumers are so opposed to a forced service charge. 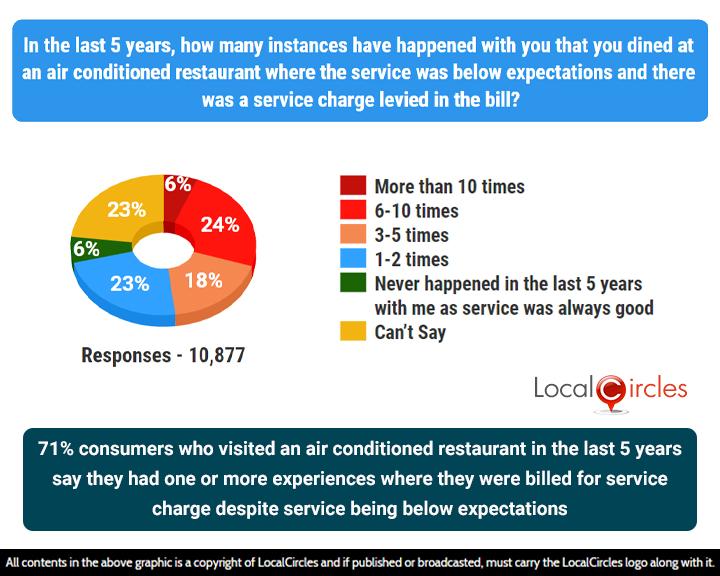 In summary, the survey clearly indicates that consumers at large are not happy with the Delhi High Court Stay on CCPA guidelines that restricted levying of service charge by restaurants. 20% consumers are likely to put up a fight at the restaurant to get it reversed while 37% will avoid visiting any restaurants that levy service charge. Another 13% are likely to just stop going to restaurants to avoid the dilemma and uncertainty of embarrassment. Also, the survey found that poor or mediocre service experiences were not that rare with 71% consumer surveyed saying they had one or more such experiences in the last 5 years and they were levied a service charge. All in all, the survey indicates that the writing is on the wall for the restaurant owners: Get rid of service charge and if the economics are not working, increase food prices but ensure that consumers have a high certainty, good quality experience with food and service so they keep coming back.

LocalCircles will share the findings of this report with the CCPA and the Department of Consumer Affairs so as they move to defend the rights of the consumers, they have access to the consumer pulse.