Mobile Food Apps: Majority consumers concerned about the quality of food delivered but compromising for convenience 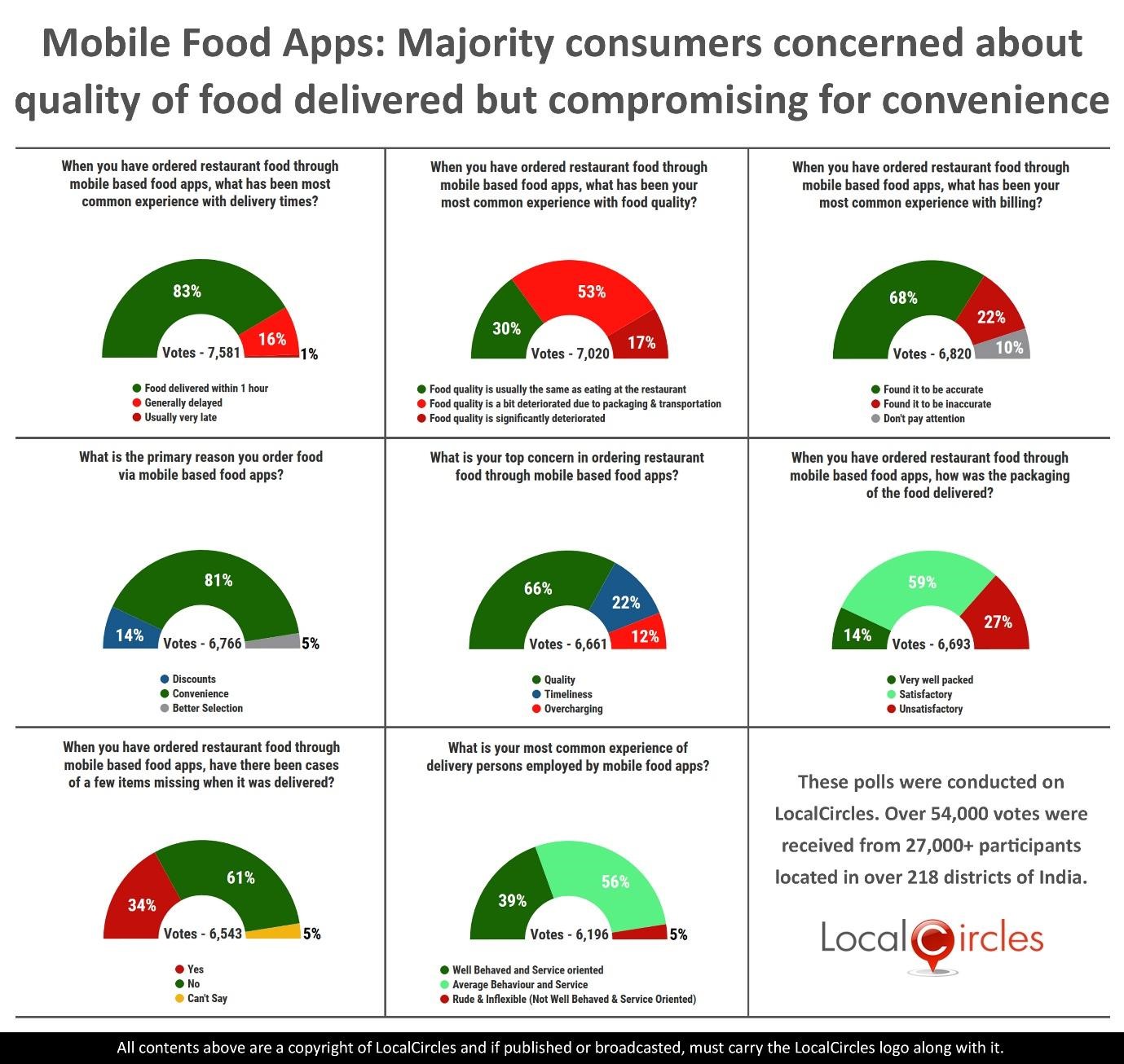 July 22, 2019, New Delhi: Over the last several months, the food, consumer and standards communities on LocalCircles have been seeing a steady flow of complaints about quality of food delivered by the food apps. Apps like Swiggy, Zomato, Uber Eats, are fast becoming an essential on the smartphone of the urban consumer. Basis the complaints received, LocalCircles decided to conduct a survey to check the consumer pulse on food delivery apps and received close to 55,000 votes from 27,000+ consumers from across 218 districts of India. In the first question, people were asked what has been their experience with delivery times when they ordered through food delivery apps and websites. 83% said food is delivered within 1 hour and 16% said it generally gets delayed. Only 1% said it usually arrives very late. 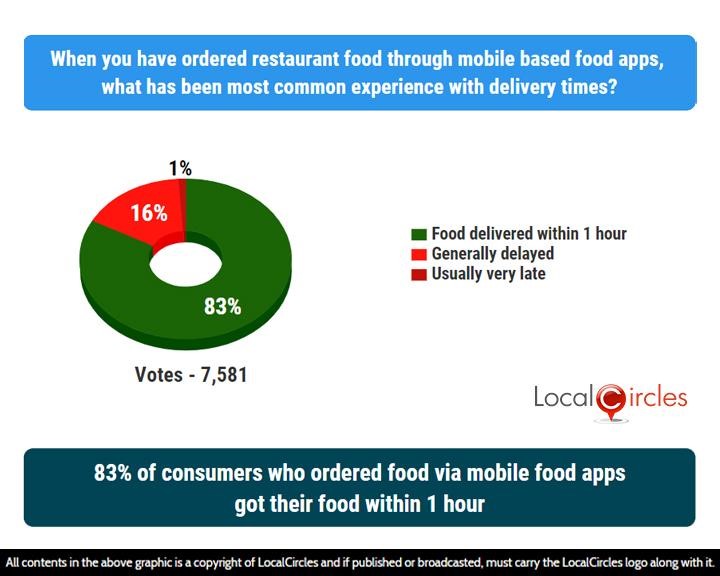 With the cricket season going on, these sites and apps have been making big bucks as people choose to order food from the convenience of their cosy couches and watch cricket matches, instead to going out to the restaurants. But complaints regarding food quality, delivery time, food packaging etc. keep trickling in from time to time. 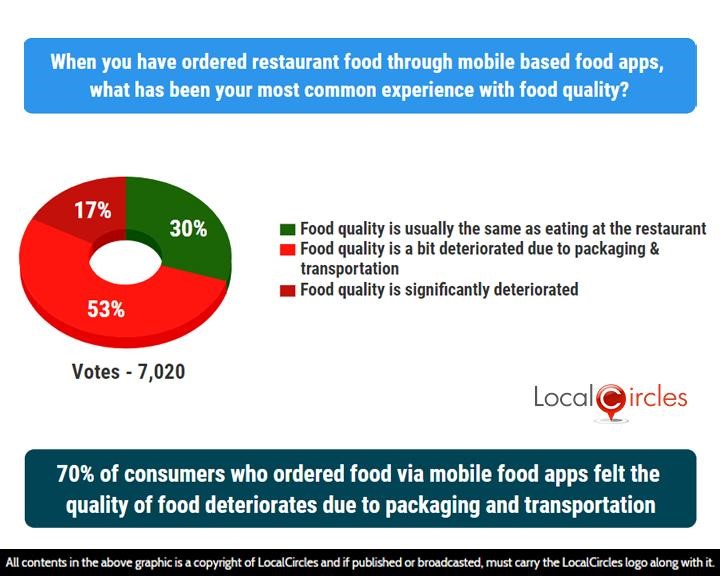 Cases have been reported where some of the outlets registered on these apps have turned out to be make-shift, operate out of home joints, with little focus on hygiene and quality. Zomato and Swiggy had recently delisted thousands of restaurants from their platforms which were not FSSAI compliant, however like Seema Mehra’s case, complaints keep trickling in. 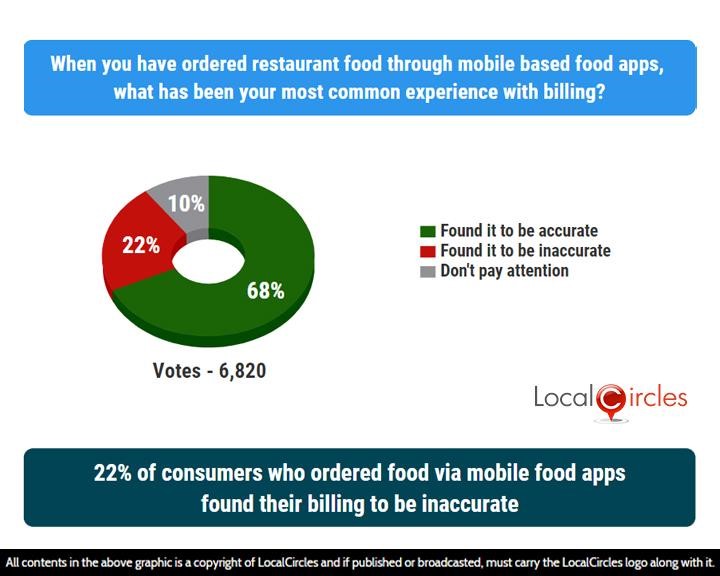 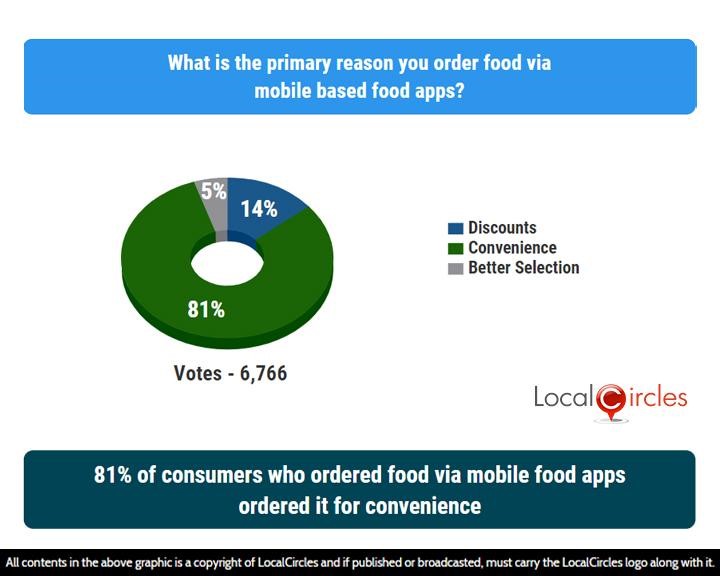 Along with convenience, another thing that attract customers towards these food apps is the discount provided by these apps. Many promotions and discount schemes keep running on these apps which make it more cost-efficient for the consumers to consume outside food.

81% respondents in the next poll said that they order food via mobile based food apps due to the convenience it provides, while 14% said they order because of the discounts these apps offer. 5% said it provides them a better selection of food. 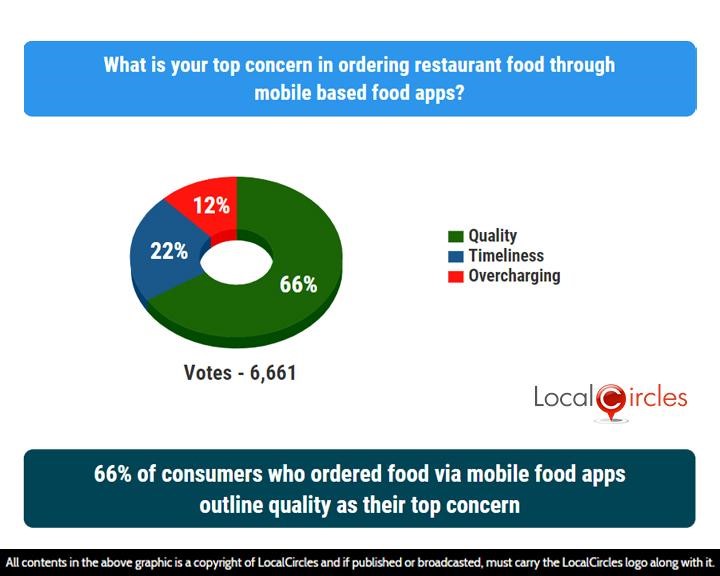 66% said that the top concern in ordering restaurant food through mobile apps is quality and 22% said it is timeliness of delivery. 12% said overcharging was the biggest concern. 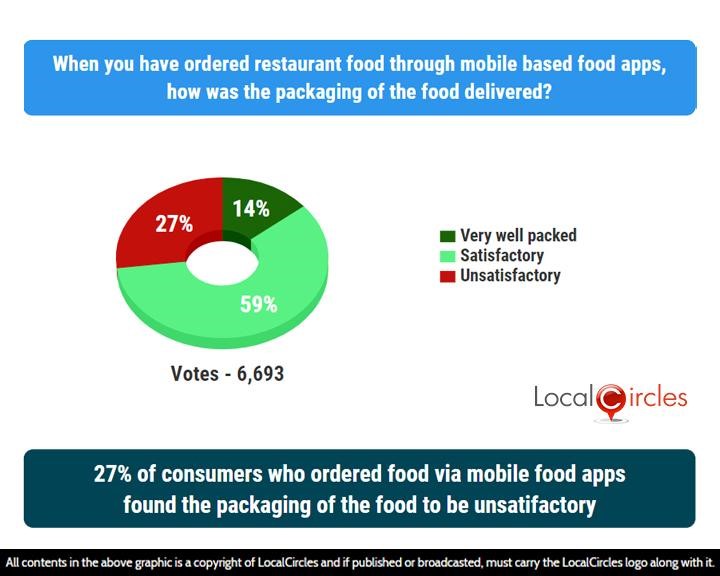 59% also said that the delivered food was satisfactorily packed while 14% said it was very well packed. 27% said the packaging was unsatisfactory.

Zomato was in the news earlier this year when one of their delivery boys was filmed opening and consuming a part of the food package that he was supposed to deliver. After the video created a flutter on social media, Zomato announced that it will soon move to tamper proof packaging but did not mention a deadline for it. A few months later, they introduced tamper-proof food packaging in some cities. 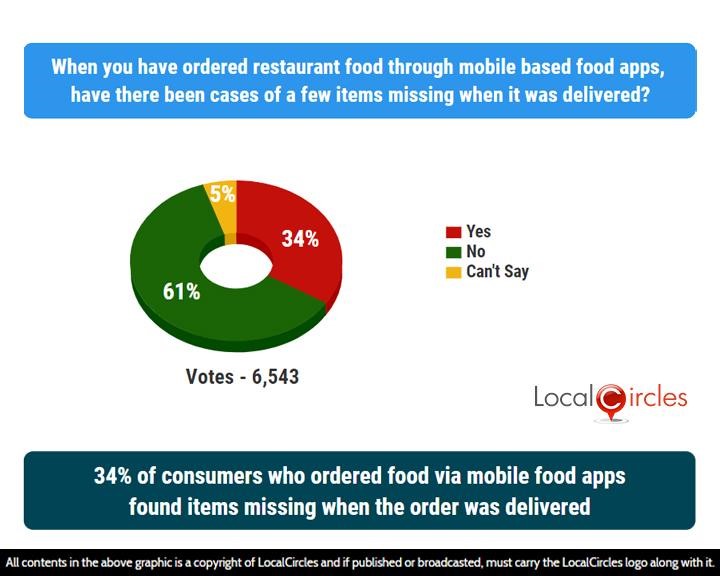 Citizens were asked when they ordered food through mobile food apps, were there cases of a few items missing when it was delivered. 34% said yes while 61% said no. 5% were unsure. 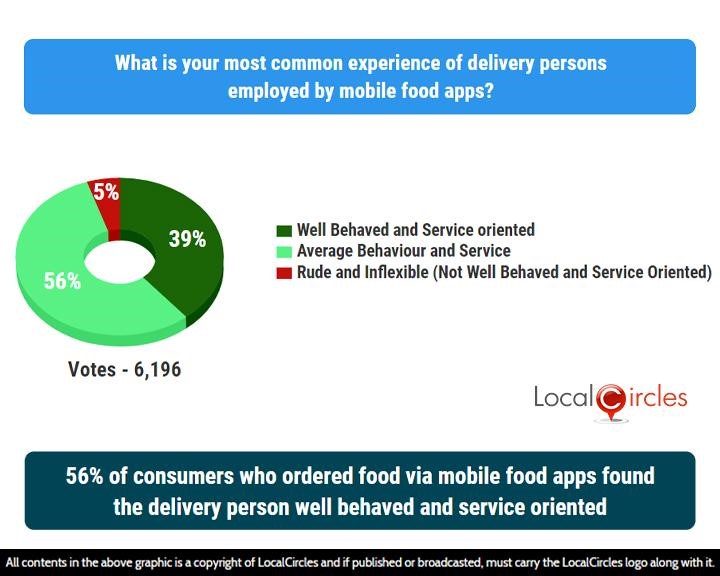 When LocalCircles spoke to representatives of prominent restaurants, the picture didn’t seem to be very rosy though. Multiple restaurant owners complained about the fact that these apps were causing long term price distortion by lowering prices artificially. Some even expressed concerns about the fact that a sizeable portion of the food on these apps now was being delivered from cloud kitchens instead of actual restaurants.

Overall though, the consumer survey does point to the fact that consumers are happy with the service provided by these food apps and sites, but want food quality and food packaging to be addressed. The food regulator of India, FSSAI can play an important role by ensuring only FSSAI approved and audited restaurants are allowed to be listed on the food delivery apps. LocalCircles will also submit the findings of this survey to all associated Government stakeholders to drive improvements and regulatory changes.