84% believe their State/District is not at all active in cracking down on food adulterators ; Most say Fruits/Vegetables top items that are adulterated 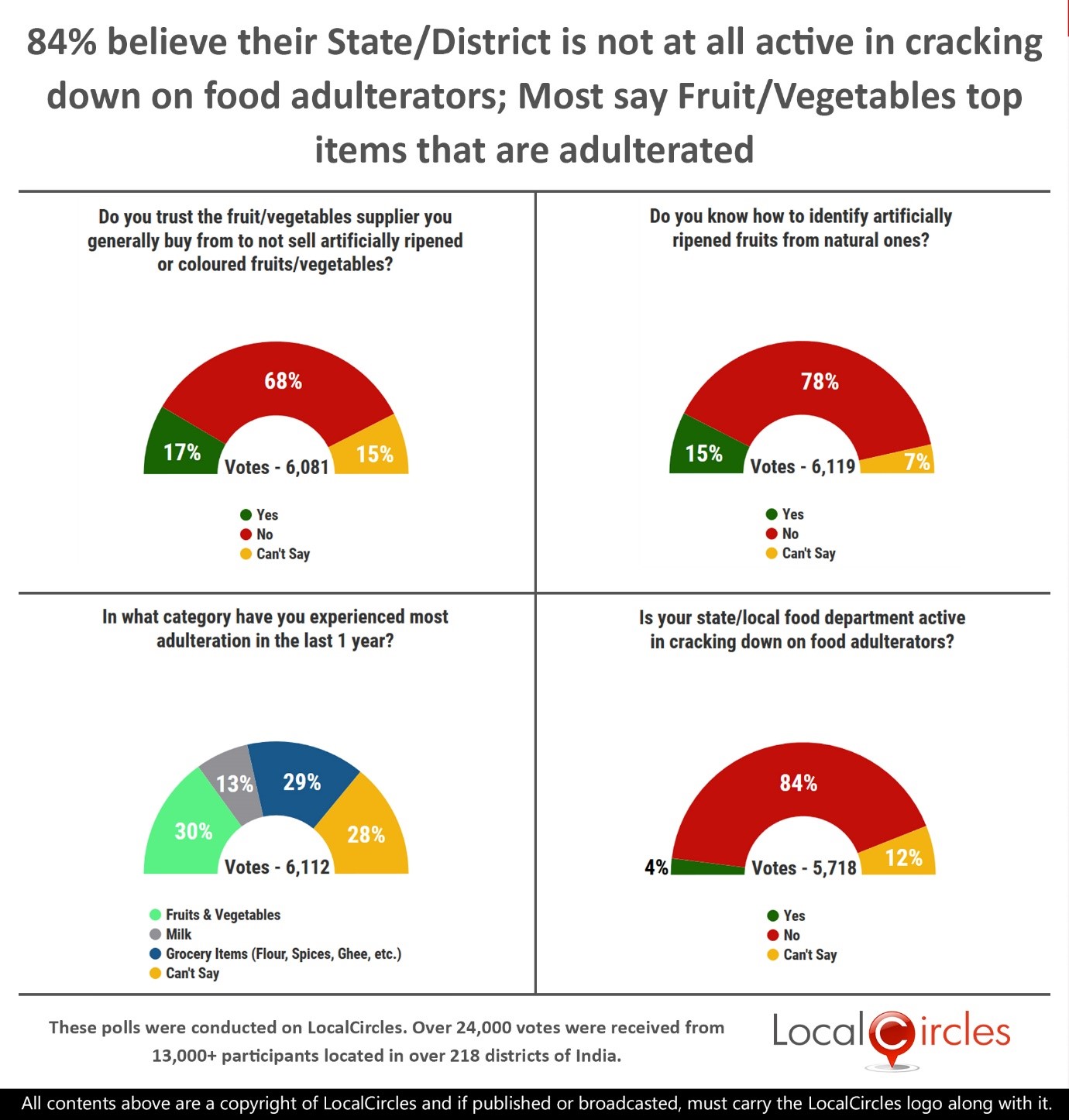 16th May 2019, New Delhi: Summers see an increase in the sales of fruits as the king of fruits “Mango” arrives. However, according to reporting by active citizens in the various food, consumer and city level communities on LocalCircles, majority of the fruits available to consumers are ripened artificially. In case of mangoes, either they are ripened using the banned substance calcium carbide or something called as Chinese ethylene. Per consumers, even the food shopping apps like Big Basket sell mangoes that are ripened using ethylene citing that ethylene ripening is permitted by FSSAI, the country’s food regulator.

However, the active and informed citizens have been conducting various tests to find out whether the mango in their hands is artificially ripened and the most common test done by LocalCircles is the water bucket test where one can put mangoes in a bucket of water. The ones that are naturally ripened, sink to the bottom while the artificially ripened ones tend to float.

Consumers have not only discussed the prevalence of artificial ripening in fruits but also its side effects. Calcium Carbide as outlined by many expert members on LocalCircles, is a carcinogen and extremely harmful to the human body while artificial ripening agents in general can lead to headaches, dizziness, mood disturbances, sleepiness, mental confusion, memory loss, cerebral edema, seizures and prolonged hypoxia.

LocalCircles conducted a 4 point survey to check what consumers think about artificial ripening of fruits and vegetables. The 4-poll survey received more than 24,000 votes from 13,000+ unique citizens from across the country.

The first question asked consumers if they trust the fruit/vegetable suppliers they generally buy from to not sell artificially ripened or coloured fruits/vegetables. 68% answered in a ‘no’ while only 17% answered in a ‘yes’. 15% were unsure. 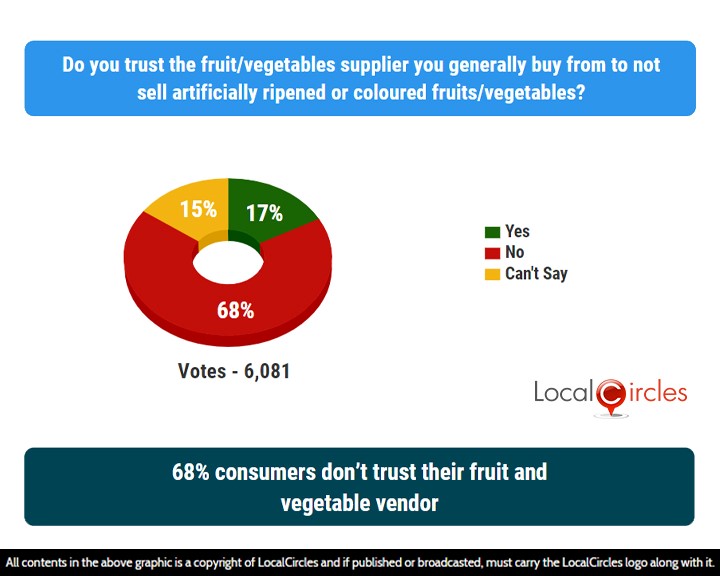 With the mango season in full flow, many cases have been reported where Chinese Ethylene, Acetylene gas or Calcium Carbide is used to artificially ripen the mangoes. This makes them dangerous for human consumption and can lead to various diseases of liver and kidney, especially among children. Small sachets of Chinese Ethylene can easily be found in mango boxes being sold in the market.

In the second poll, 78% consumers said they were unaware of how to identify artificially ripened fruits from natural ones. Only 15% said they were aware of it. 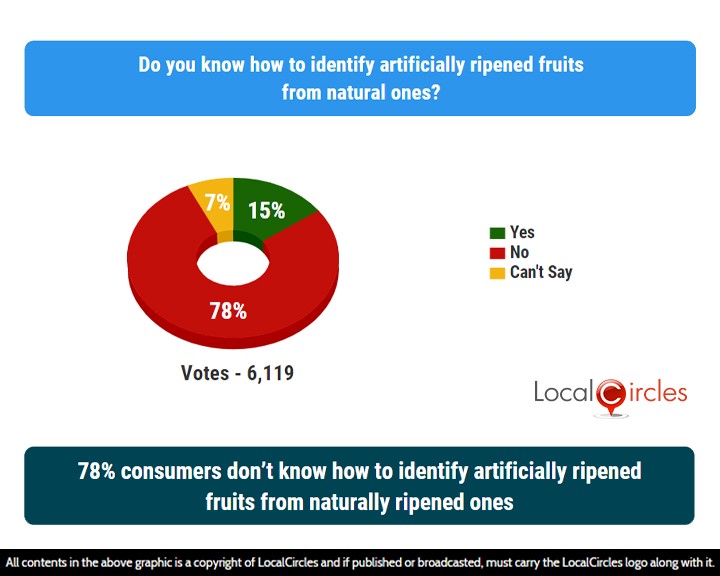 The Food Safety & Standards Authority of India has banned the use of calcium carbide and acetylene gas for ripening of fruits but vendors have been still using it openly. Several branded alphanso boxes carry either calcium carbide in a paper wrapper or Chinese ethylene sachet – Ethepon which is placed under the straw on which mangoes are placed.

When consumers were asked, in which category they have experienced most adulteration in the past 1 year, 30% said fruits & vegetables, 13% said milk and 29% said grocery items like flour, spices, ghee etc. 28% said they were unsure about it. 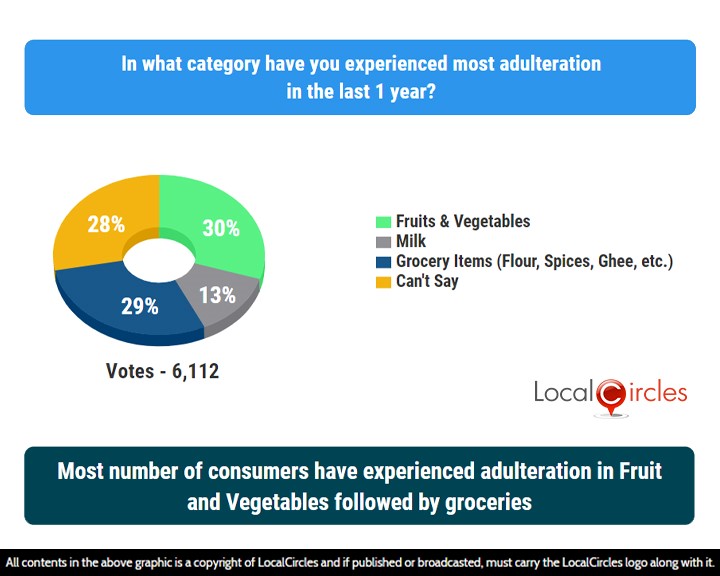 Other than fruits and vegetables, there are many other categories where adulteration is done.

On the 4th question about the role of the authorities to minimise such malpractices, 84% consumers said that their state/local food department is not active in cracking down on food adulteration. Only 4% said it was active while 12% were unsure. 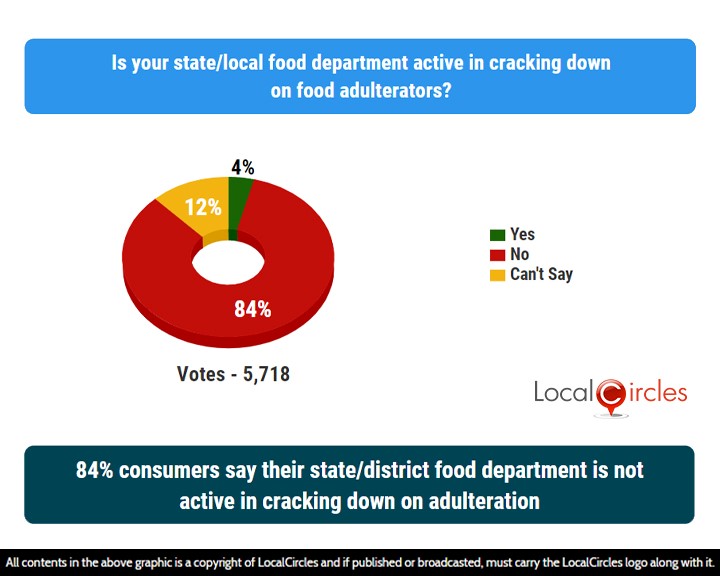 It is very clear from the consumer responses to these 4 questions that adulteration is a serious matter and FSSAI and other Government agencies have their work cut out to stop this artificial ripening and ensure that people’s health is not put at risk. Awareness and action on consumer reporting can be the first step which has been missing for all practical purposes. FSSAI will need to initiate this in mission mode with state food departments and district administration if public health is a Government priority.