2 in 3 citizens want Government to reconsider its decision about restarting international flights from Dec 15,2021 in light of the new Omicron or Covid B.1.1.529 variant

November 27, 2021, New Delhi: The Government of India has revised travel guidelines for international travellers. As per the latest notification issued by the Ministry of Civil Aviation, scheduled commercial international passenger services to and from India will resume from December 15th, 2021 barring 14 countries classified as “at risk”. The Ministry of Health and Family Welfare (MoHFW) has categorised these international countries into 3 categories—not "at risk", "at risk", and air bubble, with separate restrictions and bubble flight arrangement, will continue as is with some capacity changes. The Government of India had implemented a restriction on operations of scheduled international commercial passenger services to and from India on March 23rd, 2021. The revised travel guidelines come as several other countries are reimposing travel restriction in the light of the newly discovered and possibly vaccine-resistant COVID-19 variant —B.1.1529. WHO designated this variant as a “variant of concern” and named it “Omicron” within an unusually short window of 48 hours after several scientists and epidemiologists around the world raised the red flag. Data suggests that the variant has 32 mutations and a 500% advantage over the base or alpha variant of COVID.

As per the new guidelines, Hong Kong and South Africa, where cases of the new variant are rising will resume flights at 50% of the pre-pandemic capacity. Many Indians are starting to fear that the country may see the rise in COVID cases propagated by new variants. India’s share of global active COVID cases was at 0.57% and is 22nd position among the most affected countries by active cases as of November 24. Over 118 crore vaccine doses were administered under a nationwide vaccination program during the period. While no cases of the B.1.1529 have been sequenced in India yet, given that several more countries like Israel and Belgium have reported the variant within 24 hours of South Africa and Hong Kong, chances are travel is playing a major role in its spread.

LocalCircles has been very active on all aspects of COVID and ensured that the collective opinion of citizens reaches the Government of India. In late December 2020, based on public feedback, LocalCircles had escalated to the Government the risk of mutant COVID urging that all flights from the UK and other high-risk countries be shut till the end of January amid concerns over the highly infectious B.1.1.7 SARS-COV2 variant at the time. In the survey, 64% of citizens wanted bubble international flights shut with countries, particularly the UK, having cases of the new strain. However, after keeping the flights shut for 2 weeks, the Government of India decided to resume them from January 8th, 2021. In March 2021, Punjab reported that 82% of the cases in the state were B.1.1.7 clearly indicating that the direct flights from the UK to various cities of Punjab had a key role in the spread of that variant.

64% citizens want Government to reconsider its decision about restarting international flights from Dec 15, 2021 in the light of the new Covid B.1.1.529 variant

A new variant B.1.1.529 or “Omicron” has been identified in South Africa, Hong Kong and several other countries and several leading scientists have classified it as having much higher transmissibility than the Delta variant and as evading vaccines with a large number of mutations. The first question asked citizens if the Government of India needs to reconsider starting international flights from Dec 15, 2021. In response, 64% of citizens said “Yes, better to be safe than sorry.” Only 25% of citizens said that it is important to restart international flights and 11% couldn’t say. 64% of citizens want the Government to reconsider its decision about restarting international flights from December 15, 2021, in light of the new B.1.1.529 variant of COVID. This question received 8,588 responses. 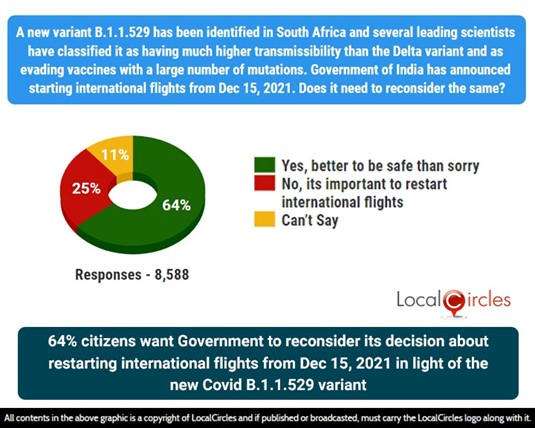 The Government of India had exempted travellers from 99 countries from mandatory quarantine requirements and instituted a mandatory RT-PCR test at arrival. Recently, a stringent screening and tracking requirement has been put in place for countries classified at risk by India which includes South Africa, Hong Kong and several others. However, according to citizens however the overall risk from international flights has risen post the identification of this new variant and increased risk mitigation is the need of the hour if international flights are to continue. The question in the survey asked citizens, “Given the new variant B.1.1.529 and a recent major increase in Covid cases in many countries around the world, what should be India’s approach towards travellers from these countries?” In response, 51% of citizens said, “Continue with current rules and permit them without quarantine but require an RT-PCR test within 24 hours before boarding and upon arrival”. Breaking down the poll, 21% said “Permit travellers from these countries but implement RT-PCR at boarding and arrival and implement a 14-day mandatory quarantine.” Further, 14% said the Government of India should “Continue with current rules and permit travellers from these countries without quarantine”, and 12% said “Temporary suspend all existing flights from countries with TPR of 2% or higher” while 2% did not have an opinion. On an aggregate basis, 72% of citizens want the Government of India to implement a mandatory RT-PCR testing at boarding and arrival for international travellers coming from countries with high COVID test positivity rates. This question received 8,105 responses. 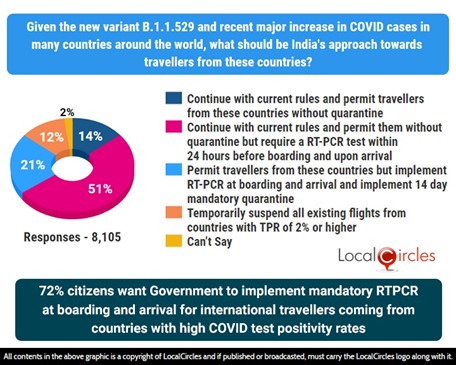 In summary, according to the majority, the decision of the Government of India to resume international flights at a time when countries around the world are instituting flight bans must be reconsidered. 64% of citizens want the Government to re-evaluate this. Also, 72% of the citizens surveyed believe that for international travellers if there is no mandator quarantine, the Government should mandate an RT-PCR within 24 hours of boarding in addition to one at arrival. With flight screening, testing and tracing of international travellers not working effectively on the ground in Feb 2020 and again in the first 3 months of 2021, people want the Government to be extremely cautious. With what India saw with the brutal second wave impacting almost everyone’s social network, people of India are just not prepared to face the 3rd wave of COVID and would rather be very conservative with international flights resumption.