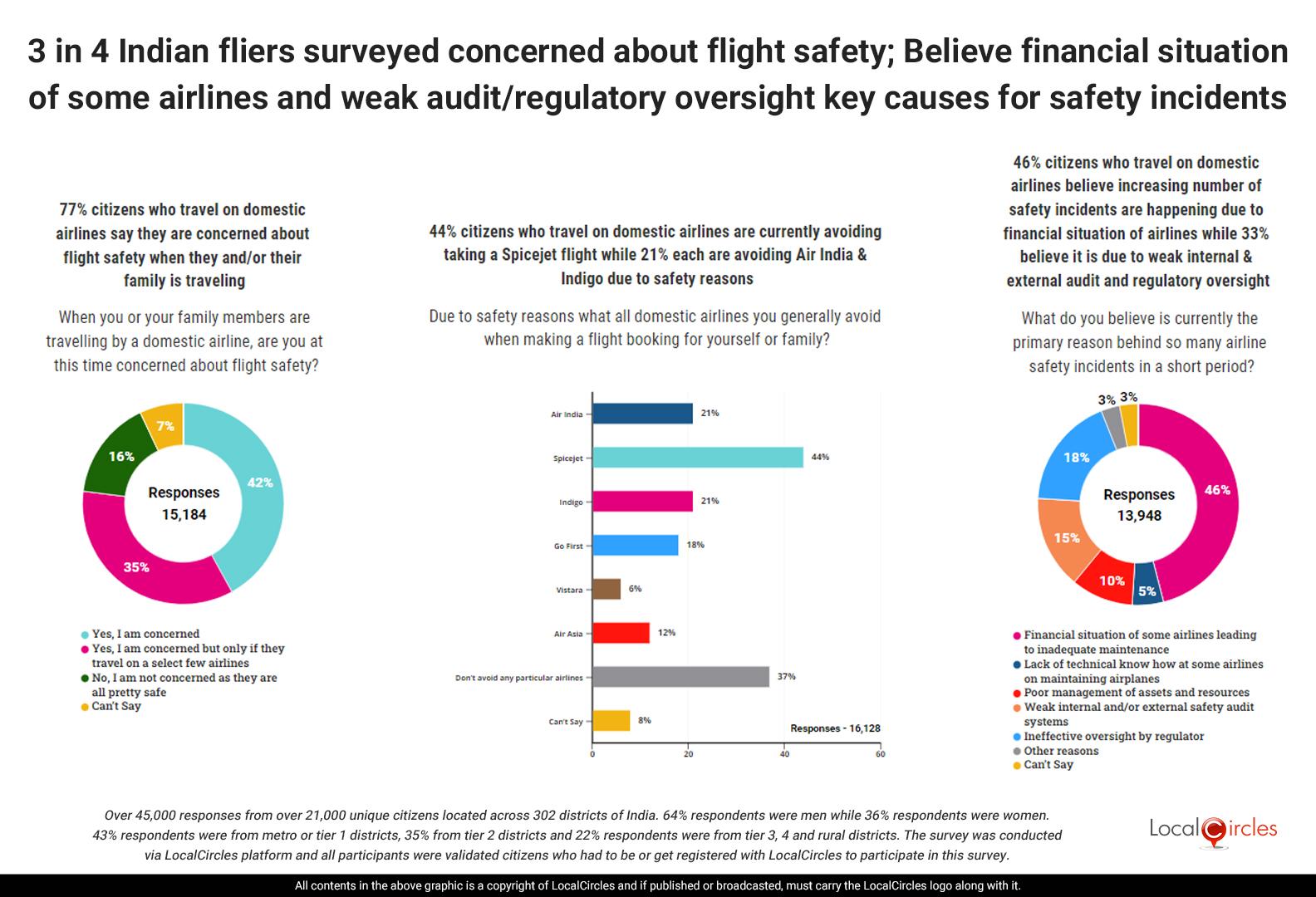 July 8th, 2022, New Delhi: Many air travellers are no longer keen on taking a flight after a spate of mishaps in a span of less than 20 days that revealed that airlines may be cutting corners on aircraft maintenance, thereby putting passenger safety at risk. This concern cannot be overlooked considering that on July 5, three aircrafts belonging to different airlines showed up to be not airworthy.

While IndiGo and Vistara airlines reported smoke and engine shut issues during their flight operations, one SpiceJet freighter plane had technical malfunction leading to the cancellation of flight to China. In the case of SpiceJet, there have been eight instances of technical malfunction in recent times.

The first question asked fliers that when they or their family members are traveling by flight, is safety a concern for them. In response, 42 percent said that they were concerned while 35 percent said they were only concerned if they were undertaking travel via a select few airlines. 16 percent respondents said that they were not concerned at all while 7 percent did not have an opinion. On an aggregate basis, 77 percent of the respondents admitted to being concerned about safety when they or their family was undertaking domestic air travel. This question in the survey received 15,184 responses. 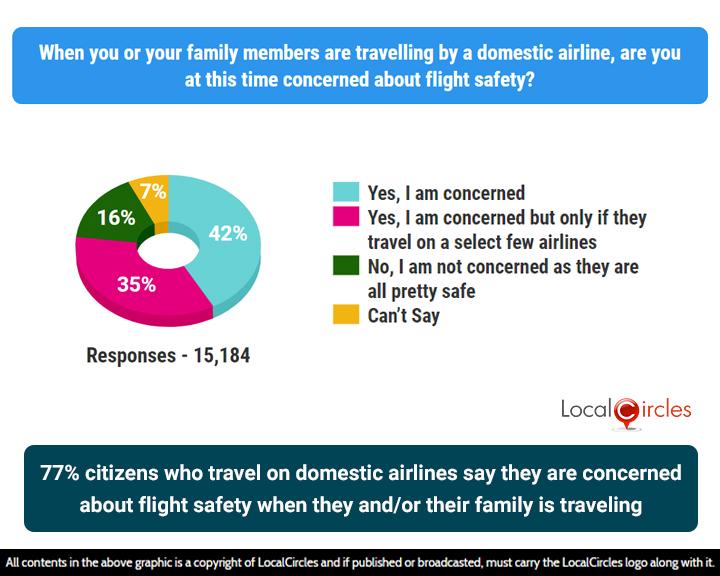 Despite having rules in place, India compares poorly with many of the developing countries when it comes to safe air travel. One of the principal reasons is the fast increase in the number of airports and aircrafts over the last several years barring during the pandemic, which hit the civil aviation sector in India, similar to the trends seen globally.

The triple whammy of poor air travel sentiments, rise in aviation fuel costs apart from drop in air travel by both leisure and business travel during the pandemic have apparently hit the airlines, which as the latest incident of technical malfunction of the SpiceJet aircraft incident shows, may be a result of poor maintenance practices, a key to flight safety. In a show cause notice issued by the Directorate General of Civil Aviation (DGCA) on July 5, 2022, the civil aviation regulatory authority points out that its review of the aircraft operation has revealed that SpiceJet has on a number of occasions “either turned back to its origination station or continued landing to the destination with degraded safety margins”. The DGCA has also noted that financial assessment of SpiceJet carried out in September 2021 “revealed that the airline is operating on Cash & Carry and Suppliers/Approved Vendors are not being paid on regular basis leading to shortage of spares and frequent invoking of MELs (Minimum Equipment List)” which is vital to ensure safe and airworthy condition of aircraft. 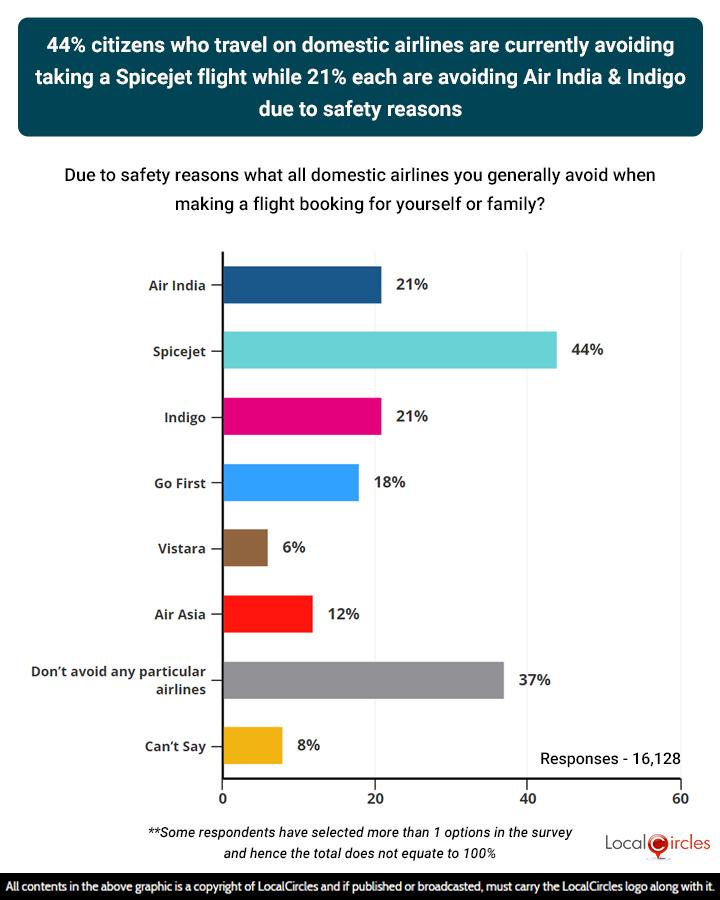 The next question in the survey focused on understanding from a flier perspective what they thought are the key root causes for so many safety incidents at different airlines. In response, 46 percent of the respondents attributed the rising airline safety incidents to the financial crunch being faced by some of the airlines leading to inadequate maintenance, while 18 percent blamed the regulator for “ineffective oversight”. Weak internal and/or external safety audit systems were attributed by 15 percent respondents for the rising air safety concerns. 5 percent of the respondents said it was due to the lack of technical know how at some airlines while 10 percent attributed it to poor management of assets and resources. On an aggregate basis, 46 percent felt it was the financial situation at some airlines that was driver of the safety incidents while 33 percent attributed it to weak internal and external audit systems and regulatory oversight. 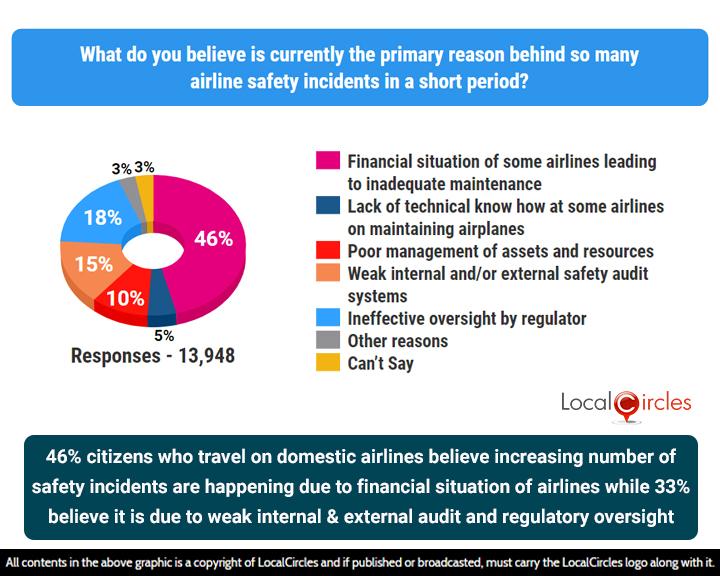 In summary, while the DGCA has issued notices to airlines post the recent safety incidents, 77% domestic fliers surveyed expressing safety as a concern when they or their family members are traveling is a noteworthy statistic. The concerns definitely are real because, when making a booking many have started avoiding traveling on certain carriers. In a price sensitive market like India, this is significant that some fliers are giving a higher priority to safety over lowest fare. 46% domestic fliers in the survey saying that it is the financial situation of some airlines that is driving safety incidents due to inadequate or ineffective maintenance is also a key finding. 33% in the survey saying that it is the weak internal & external audit systems that are root causes is also a noteworthy statistic for DGCA and the Ministry of Civil Aviation and something that they must examine in detail. The filers have been paying increased air fare imposed on them due to higher fuel prices, in some cases, double of what they were paying pre COVID and hence they expect safety to say the least. The DGCA must step up to the plate and ensure that there are no corners cut when it comes to maintenance and an unsafe airplane should be on ground serviced instead of flying passengers.

LocalCircles may share the findings of this survey with key stakeholders in the Government so actions can be taken on concerns expressed by the citizens who travel on domestic flights.