October 5, 2021, New Delhi: The major festive season commences in India in the months of October to December bringing with it the cheer of high spirit and positive sentiment. It is the time of the year when holidays take people back home to their friends and families for the festive celebration. The Central Government has eased most travel restrictions after the 2nd wave of the COVID-19 outbreak barring international travel. Most State Governments have also eased travel restrictions completely, with a few still demanding that travelers produce RT-PCR test report if not double dose vaccinated.

The rise in travel during the festive season is also likely to give a boost to the hospitality sector of the country, which recorded a revenue per available room (RevPAR) of INR 1,582 during FY21, the lowest in the last 22 years, according to a report by Hotelivate. It can be mentioned here that many families had to cancel their summer travel plans amidst the drastic surge of the 2nd wave of COVID-19 that reached its peak in mid-May. Then as the country entered into unlocking the economy after the outbreak, an exercise conducted by LocalCircles found out that 28% of citizens had made plans to travel during August and September. 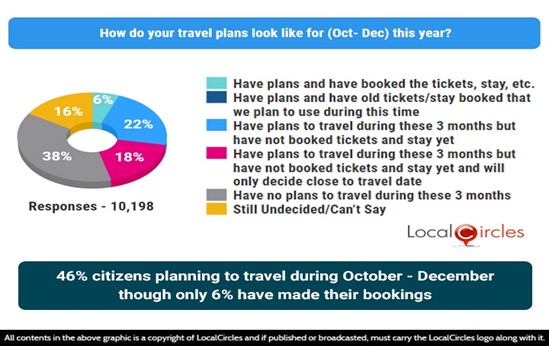 As the country was unlocking the economy after the 2nd wave of the outbreak, a similar exercise was conducted in July to understand the travel plan of citizens in August and September, which found out that only 28% of citizens planned to travel during the period. With many festivals lined up in the coming months, the tourism industry is likely to see a 60% jump in citizens travelling as compared to Monsoon Season (August to September). 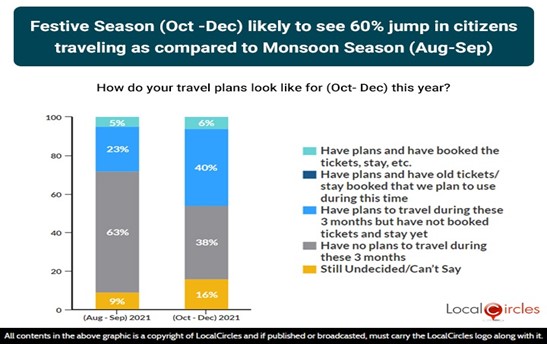 Of those who plan to travel in October-December, 34% plan to visit family and friends

Come October, many parts of India have holidays for festivals like Durga Puja, Dussehra, Diwali, and there is a good bit of travel that takes place as many head home. Many citizens also tend to club these holidays with weekends by taking a day or two off from work. The next question in the survey asked citizens about what kind of personal travel do they plan to undertake in the next few months (Oct-Dec)? In response, 14% of citizens said “(1) holiday destination”, 22% of citizens said “(2) visit family and friends” and 9% said “(3) other travel”. Breaking down the poll, 4% of citizens surveyed plan to undertake “1 & 2” type of personal travels from the aforementioned options. Another 4% will undertake “2 & 3”, 6% said “1 & 3”, and 4% said all “1, 2 & 3” kinds of personal travel. There were also 33% of citizens who said they “have no plans to travel during these 3 months”, and 4% couldn’t say. The findings of the survey indicate that of those who plan to travel in October to December, 34% plan to visit family and friends. This question in the survey received 9,612 responses. 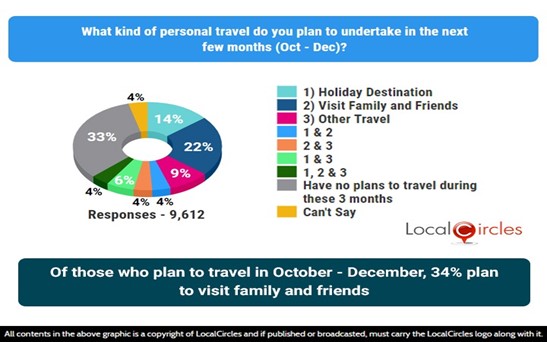 When responses given by citizens are aggregated on the basis of types of personal travel, as some plan to undertake multiple types of travel, it was found out that 34% plan to “visit family and friends”, 28% will visit a “holiday destination”, and 23% will undertake “other kinds of travel”. 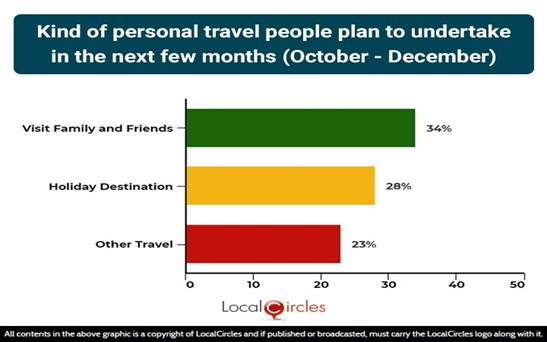 The Government, however, must continue to create awareness amongst people about limiting non-essential travel till the time the risk of a 3rd COVID wave greatly reduces. The other aspect that must be reiterated by all stakeholders like the Government, airlines, railways, hotels, etc. is the importance of mask and social distancing compliance. It must be remembered that the travel rush expected in the festive season is somewhat similar to the rush that was observed in March this year when many families undertook travel post-school sessions ending or booked their travel in April-May only to cancel it later due to the arrival of 2nd COVID wave.

As always, LocalCircles will be submitting the findings of this survey with Central Government and State Governments so they are all aware of the on-ground situation in regard to people’s travel plans and act on sensitisation of public on mask and social distancing compliance, and keep a very close eye on daily case-loads for India cannot afford a 3rd COVID wave at this junction.