December 7, 2020, New Delhi: As the COVID-19 daily case load in Delhi has finally declined after a major festival related surge since early November with number of daily cases down from 7000 to an average of 3500, the farmer protest could be the next big surge driver. With over 300,000 farmers already protesting in Delhi, protests are also growing in other cities of India. Latest reports suggest that over 40 farmers at the protest site in Delhi are already showing symptoms of Covid, such as high fever, cough and fatigue and refuse to get tested or admitted in hospitals nearby.

The protest that began on November 26 has witnessed a sea of farmers parade from places of Punjab and Haryana to the Delhi borders, and have set up camps at the Singhu, Tikri borders with Haryana and Ghazipur and Chilla borders with Uttar Pradesh. Farmers want the Government to repeal the new farm laws, and have placed 5 other demands, while calling for a country-wide shutdown on December 8, 2020.

LocalCircles has conducted a survey to understand citizens’ opinion over the timing of the farmers’ movement in Delhi being a hotspot for COVID-19 cases as well as what people think of the call for nationwide shutdown on Dec 8. The survey received more than 17,000 responses from people located in 211 districts of India.

As one of the programs to protest the implementation of the Farmer’s Bill, the farmers union have called a Bharat Bandh on December 8, 2020, with many political fronts also supporting their movement. Related to this program one of the questions in the survey asked, “Do you believe farmers are doing the right thing by calling for an India-wide shutdown, and closure of all roads and toll plazas connecting Delhi on December 8?”. The question received 8,837 responses, with 77% citizens indicating that the shutdown is not the right approach to getting their voice heard. Shutdowns inconvenience common citizens in several ways and if history is referred to, causes and political parties have achieved little with such calls for shutdown in the past. 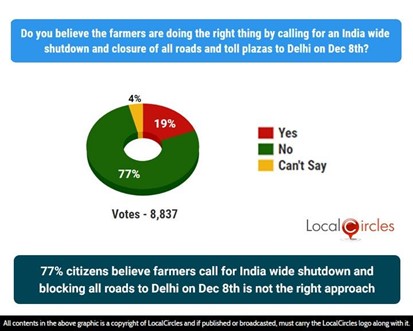 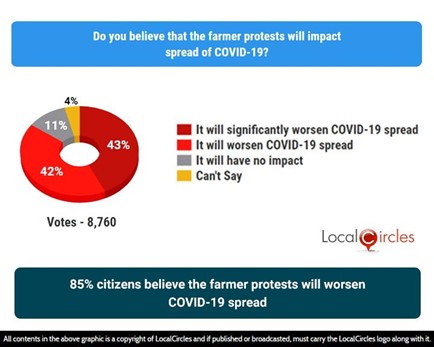 Reports indicate that a sizable section of the protesting farmers believe that Covid cannot do much and the impact of the new farmer laws is far worse than what Covid can do. Citizens on the other hand believe that the farmers are totally within their rights to protest but given how all norms of social distancing, masks and hand hygiene are being violated at the protest sites concerns them greatly. Another big concern raised by citizens is the fact that as Covid spreads at the protest site in Delhi, many of the protesting farmers could take it back with them to Punjab, Haryana, Uttar Pradesh and the various states of India leading to another spike there.

LocalCircles will be sharing these findings with the various stakeholders such that actions can be taken to minimise the propagation of Covid-19 at the protest sites.