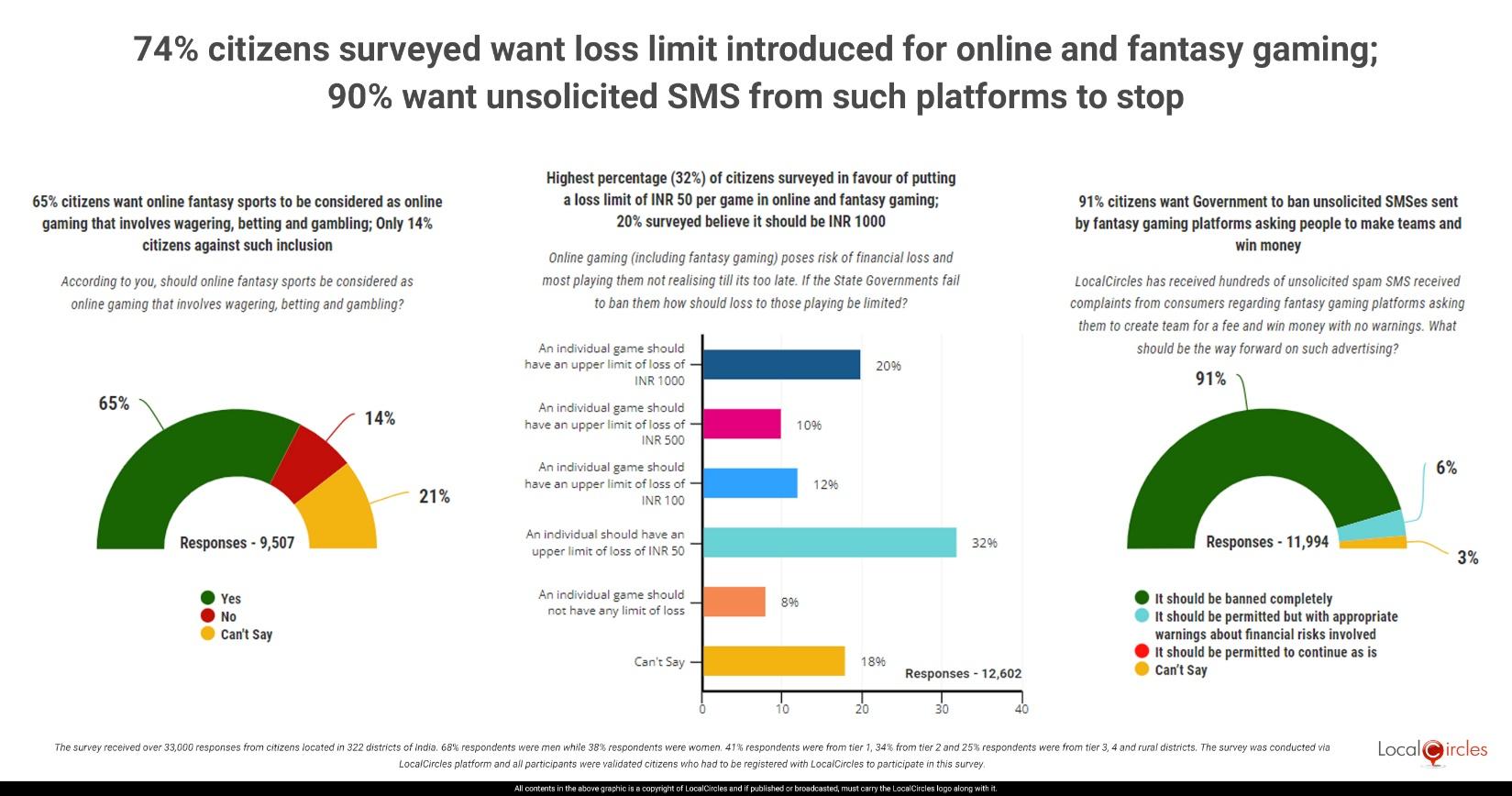 November 21, 2022, New Delhi: “Rupees 2000 added to your Rummy account, play rummy now” sent as a text message to someone’s mobile phone is just one example of how online gaming portals keep people hooked to the excitement of playing with money and risk their hard-earned money. Should such games be defined as gambling or a game of skill? No clear definition or guideline is available from the Government. While there is no blanket ban, apart from 11 states, others have put a ban on online gaming with money or risk. As far as the court rulings go, the Punjab High Court in 2017 ruled that Fantasy Sports is a game of skill and not chance and the same was upheld by the Supreme Court. When the same was challenged recently in the context of one of the platforms, the week before last the top court upheld its position and maintained that fantasy sports were a game of skill.

Tamil Nadu Governor RN Ravi on October 1st approved an ordinance called the Tamil Nadu Prohibition of Online Gambling and Regulation of Online Games Ordinance, 2022, banning online gambling and regulating online gaming in the state. This is the second attempt by Tamil Nadu to regulate this industry after the first law, passed in 2020, was struck down by Madras High Court in August 2021 deeming it unconstitutional to ban “games of skill”. The new ordinance like the earlier law seeks to ban online poker and rummy, which could result in another legal battle. Framed on the recommendations of a committee headed by a former judge, the new law will go into effect after it is notified. This issue has been raised in few other states but the high court rulings in these cases have varied. Last week, the All India Gaming Federation has moved Madras High Court challenging this ordinance. The petitioner before the court has contended that games like poker and rummy should not come under the ambit of “betting and gambling” as they are games which require skills.

While the position of the Supreme Court and various High Courts is one reference, thousands of citizens across the country have been discussing online gaming and fantasy sports in the various online communities on LocalCircles. The key discussions over the last one year have revolved around people receiving SMS messages from online gaming and fantasy sports platforms either asking them to download the app or make their team ahead of a cricket match. Similarly, people have shared incidents of financial losses with a family member or a friend. In other scenarios, some citizens have equated these games to state lotteries of the late eighties and early nineties where people lost money regularly but a select few called them a game of skill using probability theory. Some of the citizens are also of the belief that if such games are permitted online, why shouldn’t there be money game parlours in every city, district and neighborhood. In other discussions, people have suggested that a loss limit be placed on all such games so they are primarily a source of entertainment instead of being perceived as a source of earning livelihood by some. These are some very relevant objections and discussions. To understand the aggregate citizen views on these issues, LocalCircles conducted a nationwide survey which received over 33,000 responses from people located in 322 districts of India. 68% respondents were men while 38% respondents were women. 41% respondents were from tier 1, 34% from tier 2 and 25% respondents were from tier 3, 4 and rural districts.

​Only 14% don’t consider online fantasy games to be akin to wagering, betting and gambling

One of the key discussion points amongst citizens has been the definition of so-called fantasy sports. While platform operators term these games as game of skill, most citizens believe they are a game of chance with financial risks involved. While the Supreme Court has upheld its position and the position of the Punjab High Court in 2017 and ruled that fantasy sports are a game of skill, the public view continues to differ. To get the citizens' pulse on how they perceive online games, LocalCircles did a fresh poll. It asked respondents “According to you, should online fantasy sports be considered as online gaming that involves wagering, betting and gambling”. In response, nearly 2 out of 3 respondents chose “yes”; 14% stated “no” and the remaining 21% gave no clear response. In effect, for 65% out of 9,507 respondents, online fantasy sports is akin to gambling/ wagering or a game of chance with risks in contrast to the position of the Supreme Court. 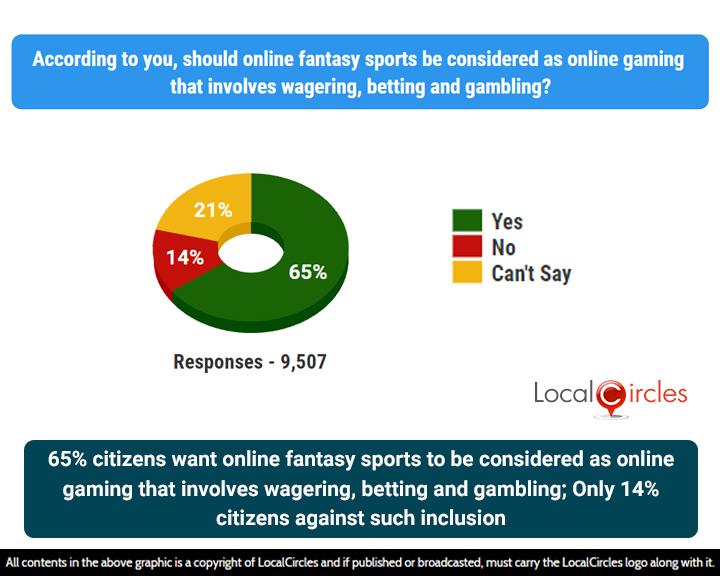 The global digital media market has consistently been growing, with gaming accounting for the biggest share of market revenues, states J. Clement in a research report published in August 2022 on Statista.com. The report states that “in 2020, the global online gaming market generated approximately 21.1 billion U.S. dollars in revenues, which translates to a record 21.9% growth compared to the previous year. This boost was, of course, due to the global COVID-19 outbreak, which forced many people to stay at home and turn to digital avenues of entertainment and find new channels to connect with others. Currently, there are an estimated 1 billion online gamers worldwide with China, South Korea, and Japan having the biggest online gaming reach among the population. In 2025, online gaming audiences are projected to surpass 1.3 billion.”

In India, casual gamers who started playing online games during the Covid-19 pandemic are revolutionizing online gaming, industry players emphasized at the India Gaming Conclave held in August 2022. They stressed that innovation in devices and content complemented by a strong digital infrastructure has been responsible for the growth of the online gaming sector in the country.

Equipped with smartphones and growing internet penetration, the online gaming sector has witnessed tremendous growth in India. A KPMG report has projected that the number of India’s online gamers is expected to jump from 43.3 crore in the financial year (FY) 2021 to 65.7 crore by FY 2025. The revenue of the online gaming industry stood at INR 13,600 crore to which casual gamers contributed INR 6,020 crore in FY'21. The revenue level of the Indian online gaming industry is expected to increase to INR 29,000 crore with casual gamers contributing INR 16,900 crore by FY'25, the KPMG report stated.

While as an industry, the online gaming industry may be creating jobs, many citizens have compared it to sin products like liquor and tobacco where the risk of negative social and health outcomes is high. Several examples have been cited where individuals instead of running their small business during the pandemic took to online gaming and lost a significant amount of money as well as, in some cases, the brick and mortar business their family had been running over multiple generations. One of the key suggestions from many citizens has been that online gaming should have entertainment value only and hence there needs to be an upper limit to the loss one can incur in such games.

The next question in the LocalCircles survey emanated from this thought process and it asked respondents “Online gaming (including fantasy gaming) poses risk of financial loss and most playing them not realizing till it’s too late. If the State Governments fail to ban them, how should loss to those playing be limited?” In response, 32% opted for “an individual should have an upper limit of loss of INR 50”. Out of 12,602 respondents to the question, there were 12% who felt the upper limit of loss should be INR 100; 10% felt the limit should be up to INR 500; another 20% felt the limit could go up to INR 1000 and 8% who felt “an individual game should not have any limit of loss”. A sizable 18% of the respondents were noncommittal on the issue. On an aggregate basis, 54% believe that the loss limit per game for online and fantasy gaming should be INR 50-500 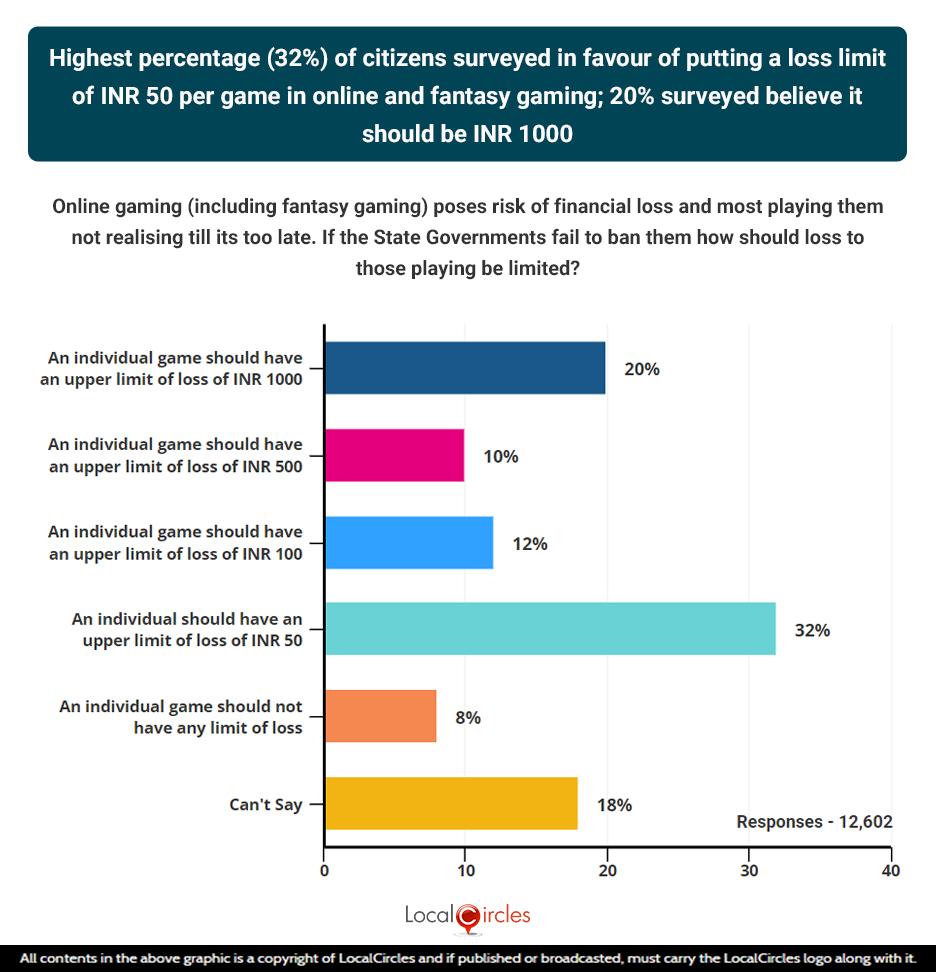 As mentioned at the onset, unsolicited spam SMS are being widely used by online gaming and fantasy sports platforms to attract new players. In many cases, these messages have been targeted towards children and young adults. The next question in the survey asked, “In view of the complaints from “consumers regarding fantasy gaming platforms asking them to create a team for a fee and win money with no warnings, what should be the way forward on such advertising”, an overwhelming 91% of respondents to the question stated “it should be banned completely. Out of total 11,994 respondents only 6% felt “it should be permitted but with appropriate warnings about financial risk involved” and 3% were undecided on the issue. Post efforts of LocalCircles in 2019 and 2020, the Government made it a requirement for all platforms to present a warning message in their advertisement highlighting the risks involved. While app stores and play stores don’t permit apps for online gaming and fantasy gaming with games of chance, the approach being used by some of the platforms is that of sending spam SMS. 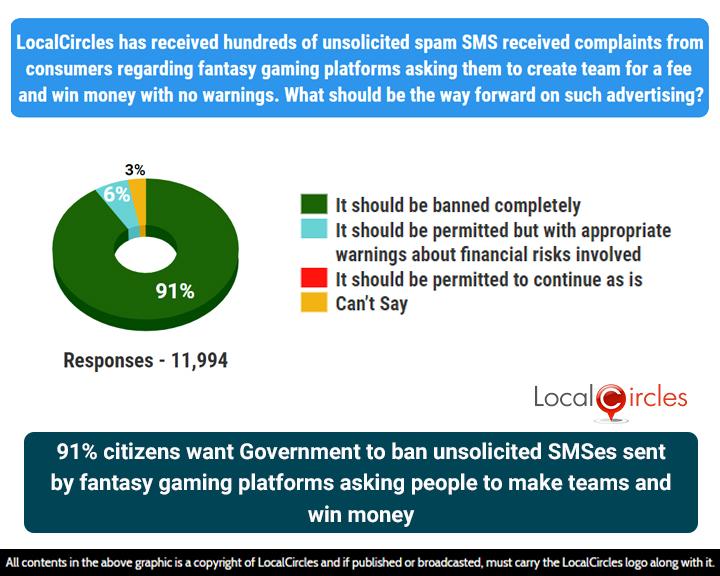 In summary, the study covers all the three key issues related to online and fantasy gaming where citizens have raised a concern. The ruling of the Supreme Court calling Fantasy Sports a game of skill as opposed to it being a game of chance has very few takers in the common public as only 14% concur with the view of the top court. 21% in the survey did not have an opinion while 65% explicitly believe that fantasy sports are a game of chance. The point about comparing fantasy sports to state lottery and the argument about Government permitting opening of physical money gaming parlours across cities and districts deserves debate. Another key citizen concern about limiting of loss in online gaming and fantasy sports is important so that masses don’t perceive these games as a way to earn or supplement livelihood and take undue risks but only look at them as an entertainment avenue. Majority in the LocalCircles survey indicated that a loss limit between INR 50-500 should be fixed per game for all online games and fantasy sports. In addition to the above two issues, people are concerned about unsolicited messages being sent from online gaming and fantasy sports platforms and 92% in the LocalCircles survey want such unsolicited communication to be prohibited. The telecom regulator, TRAI, must act to enforce the same.

As the Government looks to finalize an Online Gaming (Regulation) Bill, 2022 and present it in the parliament, LocalCircles will share the findings of this study with all the key stakeholders such that collective public opinion is given due consideration.