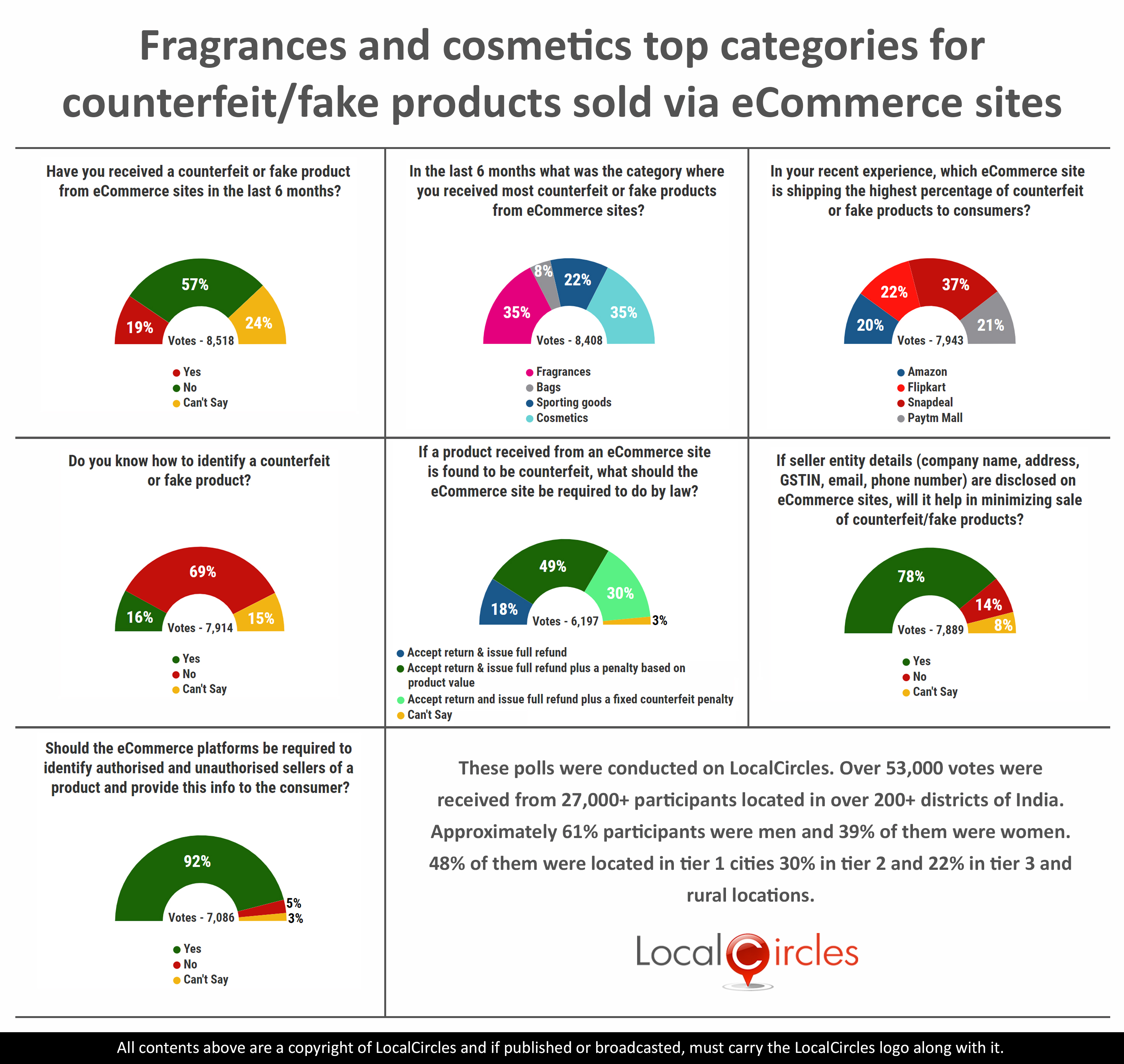 Indian ecommerce companies make millions during the festive season sales and the trend of buying big and small items from the ease of your mobile phone is spreading like wildfire. Many ecommerce sites have already put up two rounds of sale, and some are even preparing for the third. Although eCommerce brings a lot of comfort to the consumers, there is no guarantee that the products they receive are all originals. LocalCircles conducted a survey to check how big the problem of counterfeit or fake goods on ecommerce sites is. The revelations that this 7-poll survey made were quite amazing.

19% consumers in the first question admitted to having received a counterfeit or fake product from an ecommerce site in the last 6 months, while 57% denied it. 24% said they were unsure about it. 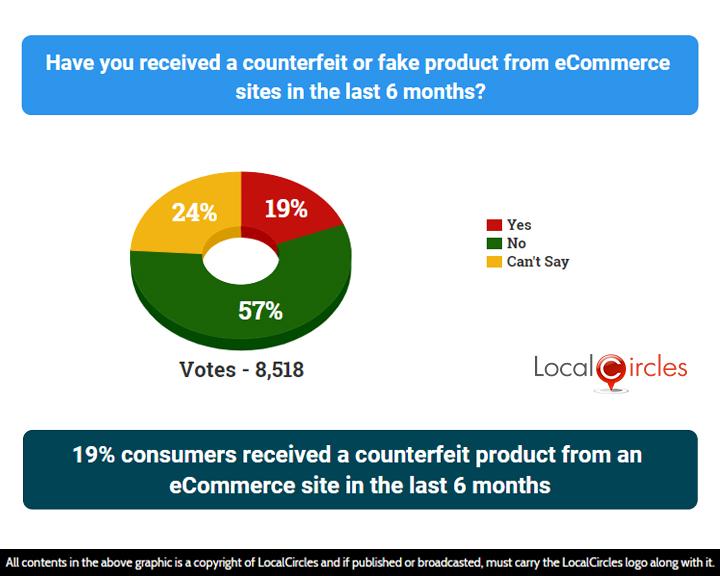 The Drug Controller General of India recently issued notices to leading ecommerce portals like Amazon and Flipkart for allegedly selling spurious and adulterated cosmetics, mainly imported brands, some of which contain harmful ingredients which could be harmful for humans.

Consumers who had received counterfeit products in the past, also identified the categories in which they received the most fake products in the last 6 months. 35% said fragrances & perfumes and 8% said bags. 22% said sporting goods while 35% said cosmetics. 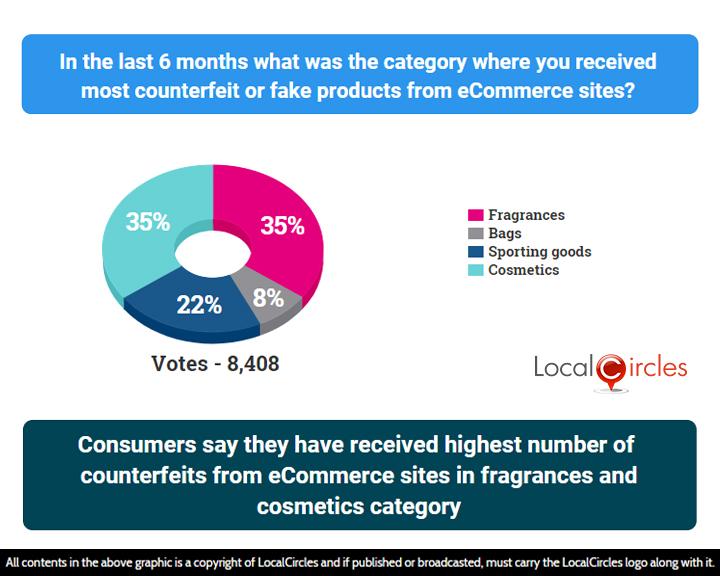 Last months in a raid, fake sporting goods worth lakhs of rupees were seized from different warehouses in the city of Meerut which is considered to be the hub of sporting goods manufacturers. It was said that these sellers were getting ready to sell these fake good in various ecommerce sites during the festive season and most of the goods were cheap copies of big multinational companies.

The next question asked the consumers their experience about which ecommerce site ships the highest percentage of fake products. 37% said Snapdeal, 22% said Flipkart, 21% said Paytm Mall, while 20% said Amazon. 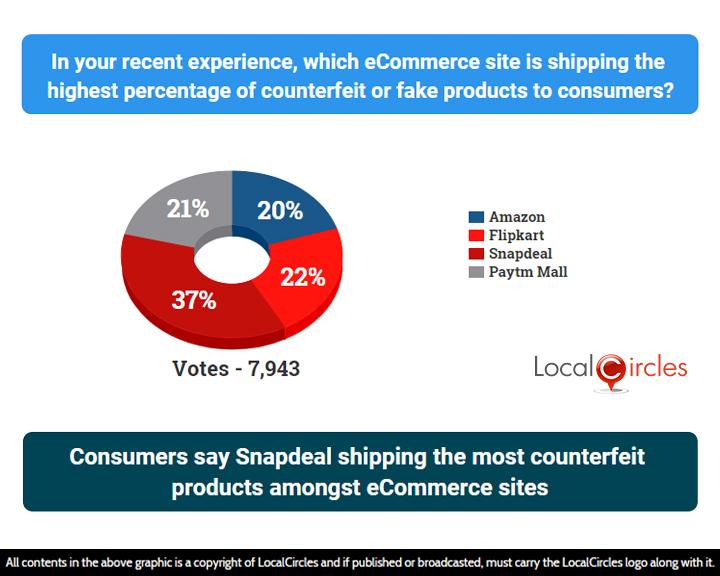 Consumers are getting fooled every day when they buy products from ecommerce sites. In the next poll, 69% consumers said that they did not know how to identify a fake product and just trust the ecommerce platforms blindly when they buy products from them. Only 16% said they know how to identify fakes and 15% were not sure about it. 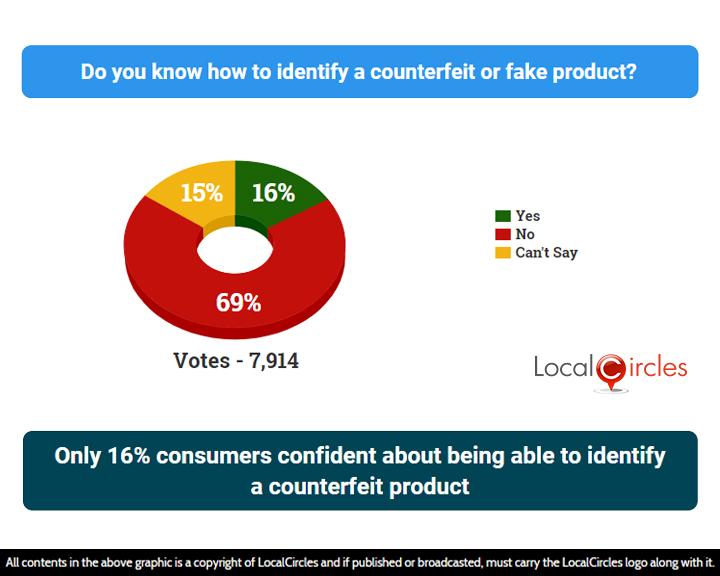 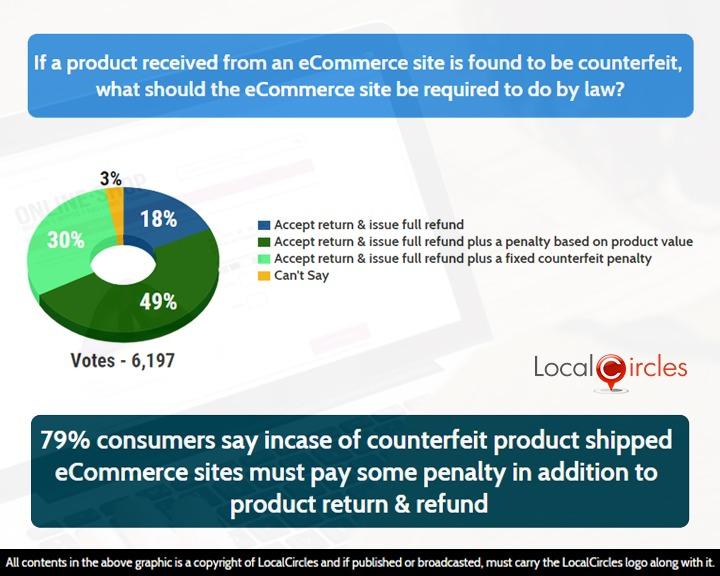 Consumers have also demanded that the ecommerce portals should take steps to ensure that the products sold on their site are genuine.

The following question asked if the seller entity details (company name, address, GSTIN, email, phone number) are disclosed on eCommerce sites, will it help in minimizing sale of counterfeit/fake products. 78% said yes while 14% said no. 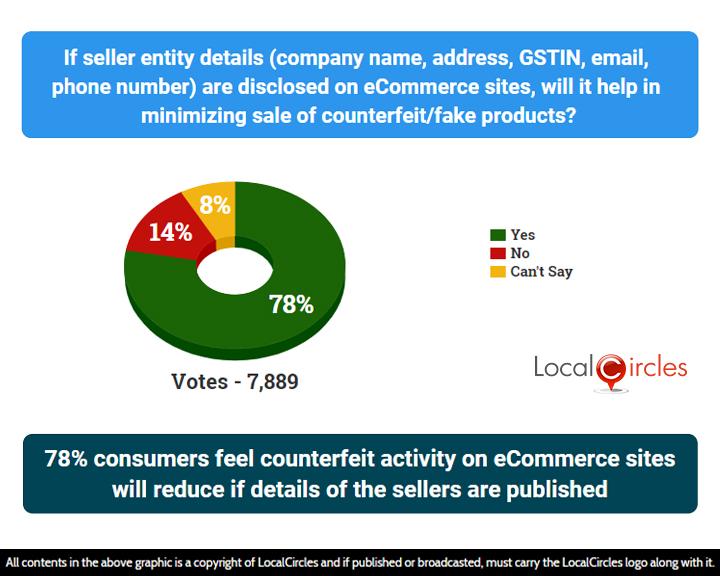 Consumers tend to go by the discount offered and many times ignore the fact that an original product cannot be sold at such a low price. The said discounts of ’50 -80% off’ tends to blindsight the consumers and lure them to buy fakes.

Next question asked if the ecommerce platforms should be required to identify authorised and unauthorised sellers of a product and provide this info to the consumer. 92% replied in a yes while 5% replied in a no. 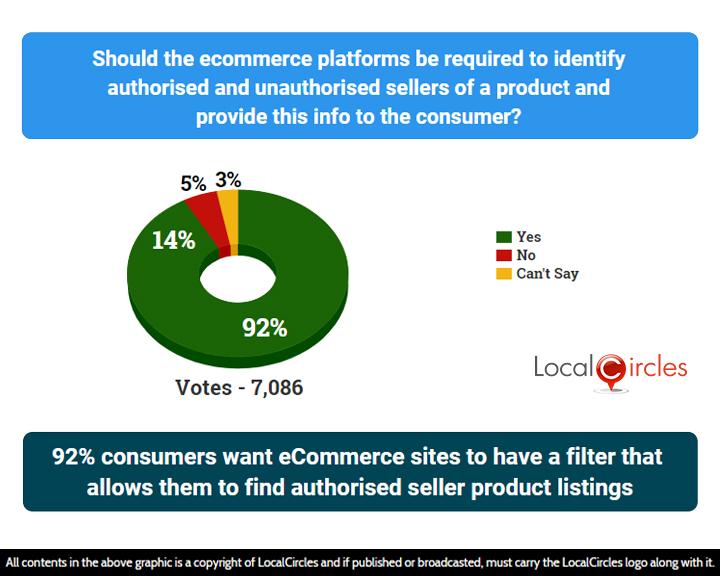 Paytm Mall, in mid-2017 had delisted over 85,000 sellers, in an effort to block fraudulent sellers from signing up on their platform. Flipkart in past has said it removes counterfeit items from its platforms regularly and has a ‘zero tolerance policy’ for counterfeit goods.

Globally, counterfeit product selling is a big business amounting to almost $500 billion annually and causing huge losses to brands. Although ecommerce companies have tried to work on the problem, they have not been much successful. Some of the consumers on the platform have also raised a strong concern suggesting that some eCommerce sites not only tend to ignore counterfeit sellers but promote such sellers as it allows them to offer the big discounts. Genuine products of international brands cannot afford to be sold at 50-80% off, according to many consumers.

LocalCircles will be submitting a version of this report, the aggregated consumer complaints received and the solution recommendations to the Department of Consumer Affairs, Ministry of Commerce and other Government departments based on their nature.