April 1, 2022, New Delhi: The adoption of electric scooters in India has expanded not only to buyers in metro/tier 1 cities but also in tier 2 towns. But as several instances of electric scooters malfunctioning and catching fire came to light, consumers from across India have been raising their concerns on LocalCircles. The concerns largely focus on the safety and performance of these scooters. Concerns have been reported about multiple brands of electric scooters catching fire, which has prompted the Government to deploy a team of independent experts to probe the multiple recent incidents. Such incidents have put the spotlight on the efficiency of lithium-ion batteries fitted in electric vehicles from where the ignition started, and the question in the mind of many consumers is, “Are electric scooters safe?”

There has been a global rise in the adoption of electric vehicles (EVs) and India is no exception. For instance, in the electric two-wheelers segment, an EV manufacturer WardWizard registered a sale of 4,450 units this year in February alone. This was reportedly the highest ever sales of e-two wheelers in any month for the company. Another player, Hero Electric has over 4.5 lakh lithium-ion-based e-scooters on the roads. Autocar Professional estimates that the high-speed e-two-wheeler industry’s sales surpassed the 100,000-unit mark from January to November 2021. Further, a Credit Rating Agency, ICRA, predicts electric two-wheelers will comprise 8-10% of the market in India by 2025. The top players in the e-two wheelers segment in Indian include Hero Electric, Okinawa, Ather, Ampere, Pure EV, Ola, among others.

1% households have bought an electric scooter in the last 6 months and another 2% are likely to buy in the next 6 months; 21% interested but staying on sidelines due to safety, performance, infrastructure concerns 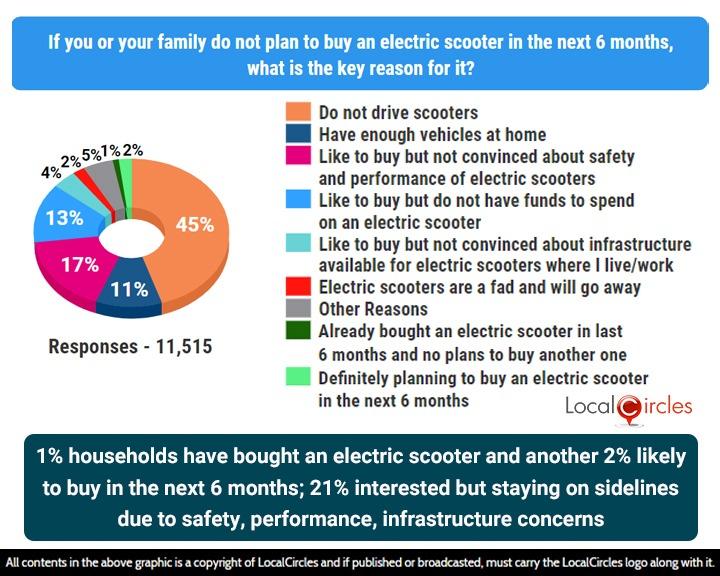 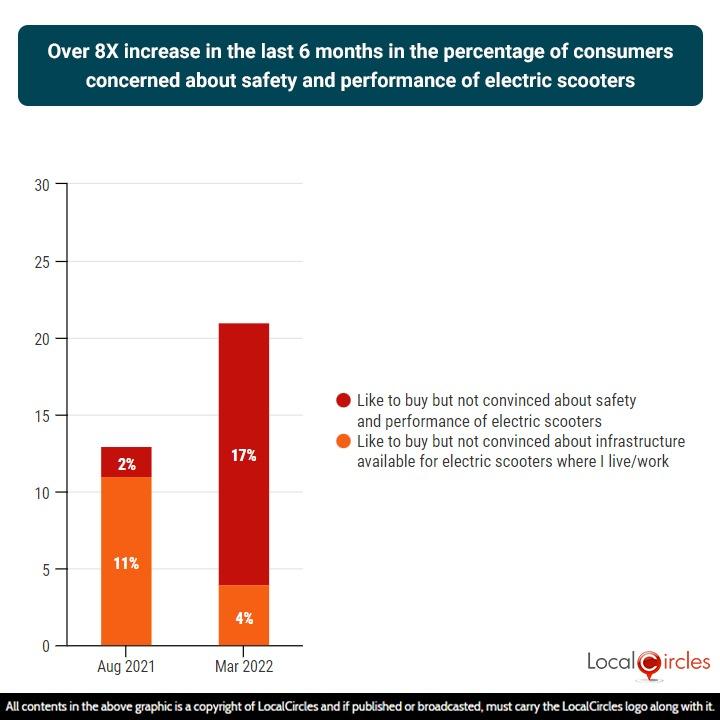 In summary, only 1% of household consumers surveyed said they or their family have bought an electric scooter in the last 6 months. It can be mentioned here that a similar survey by LocalCircles released in August 2021, had 18% of households saying they plan on buying one in the next 6 months. While the percentage of people planning to buy an electric scooter has declined, many are concerned about the vehicle’s safety and performance issues. In the last 6 months, there have been over 8X increase in the percentage of consumers concerned about the safety and performance of electric scooters. One of the key asks from consumers outlined on the LocalCircles platform has been the need for a single point regulator for electric scooters, implement Indian standards for electric scooters, batteries and any other critical assemblies as well as adherence to those standards, robust testing and approval process followed by pilot rollouts. Till this is done, many consumers believe, an electric scooter should not be rolled out in the market for consumers to purchase and use.

LocalCircles will be escalating these findings with the multiple nodal ministries on the subject such that consumer pulse on electric scooters can be considered as the way forward on them is determined.