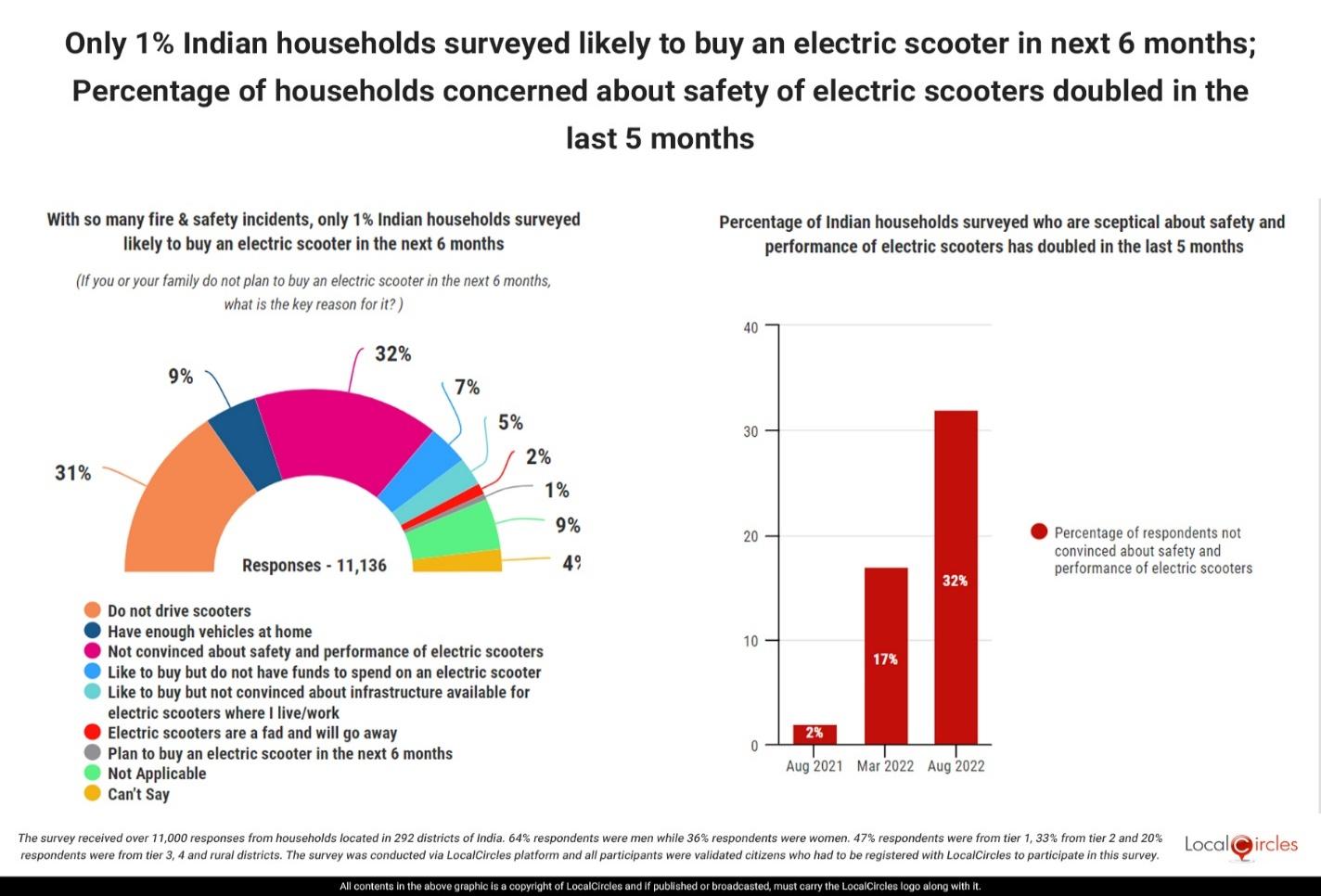 Aug 23, 2022, New Delhi: After more than two dozen electric two-wheelers caught fire in March and April, around 7,000 units were “voluntarily” recalled by electric scooter makers such as Ola, Pure EV and Okinawa. The government had however issued an advisory on April 21st urging EV manufacturers to immediately recall all defective batches of vehicles as a precaution or face a heavy penalty. The government has also set up a committee of experts from Centre for Fire, Explosive and Environment Safety (CFEES) and Indian Institute of Science to carry out detailed investigation and frame ‘quality-centric’ guidelines for electric vehicle manufacturers. The recommendations are expected to be released soon. The fire incidents, which resulted in injuries for some along with loss of vehicle, adversely impacted consumer sentiments leading to decline in electric vehicle two-wheeler sales for two months.

The fallout of this concern is that just 1% of over 11,000 respondents in the survey shared plans of buying an electric scooter in the next six months. Responding to the survey question on why they or their family members “do not plan to buy an e-scooter in the next 6 months” 5% revealed keenness to buy but “were not convinced about the infrastructure available for e-scooters where I live/work”, another 7% expressed keenness to buy e-scooters but “do not have funds” for purchasing it. What is most telling about the survey result is that 32% respondents are not convinced about the safety and performance of electric scooters, while 2% feel that EVs are a fad that will go away. The survey also brings out the fact that appetite for e-scooters is not high as 31% households do not drive them and an additional 9% shared that they had enough vehicles at home so had no plans to buy a two-wheeler.

Having set a target to raise the EV segment to 30% of new vehicle sales by 2030, government policies are focusing on promoting development of the charging infrastructure. The initial focus has been on nine mega cities with populations of over 4 million. There are currently over 1,640 operational public EV charging stations in India, of which more than 940 are in these cities. Of these, 678 EV charging stations were installed between October 2021 and January 2022. The current capacity is geared to power about 1.8 lakh new electric vehicles. The Indian scenario is in variance with global trends. In 2021, global EV purchases jumped to 6.6 million from 3 million a year earlier, meaning that EVs made up 9% of the market, according to the International Energy Agency (IEA). 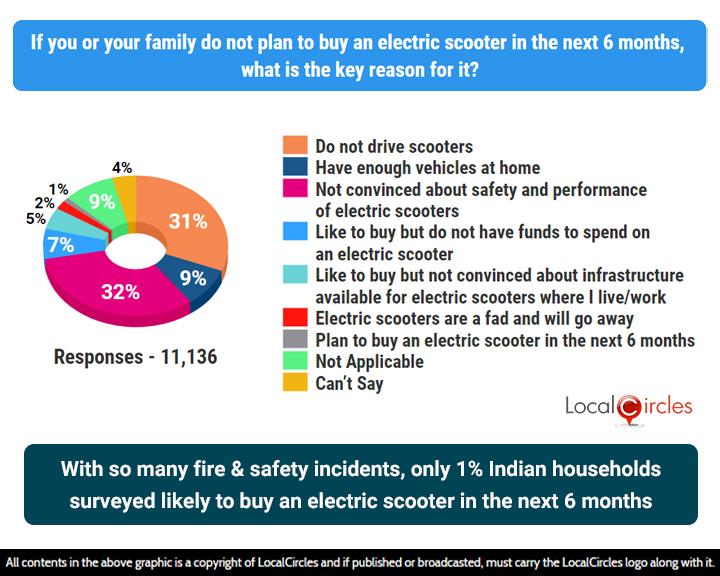 One of the top concerns of the people continues to be the fires reported in electric scooters. Consumers of various brands of electric scooters have reported these fires which many of the manufacturers have attributed to the battery. While standards are being developed for electric batteries and electric scooters, with multiple Government stakeholders involved, the process is time consuming. In addition, a robust recall process is the need of the hour such that once an issue is reported, it is root caused quickly and a recall be implemented for all such scooters of that make and model that have been sold to the consumers. Consumers are still wary of the safety and performance of electric scooters and 32% highlighted this as their concern for not even giving a consideration to electric scooters when looking at buying their next two-wheeler. This number stood at 17% in the month of March and 2% in August 2021, a year ago when many electric scooter manufacturers opened their bookings. 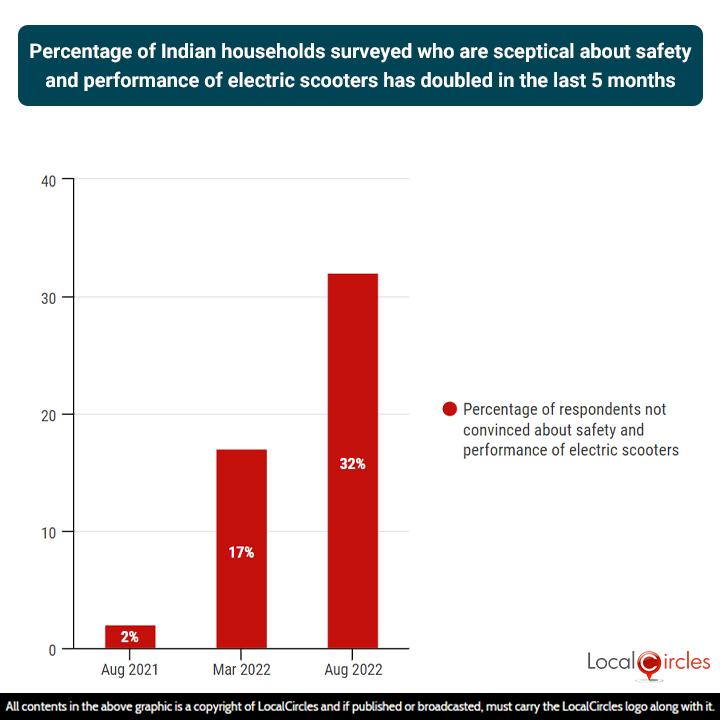 In summary, the LocalCircles survey finds that while there are many people keen to buy e-scooters, which are an attractive alternative to non-electric two wheelers or crowded public transport, concern over safety and performance are rising. With only 1% households in India considering buying an electric scooter in the next 6 months, it is critical for Government and Industry to win consumer confidence. This can happen if there is standards and their strong enforcement before product introduction in market, regulatory clarity, robust recall process, timely incident root cause and information sharing with consumers. Only if there are happy early adopters of electric scooters who have the trust in the product they are using and its manufacturer will the product sales scale. LocalCircles will escalate the findings of this study with various stakeholders in the Government so consumer concerns and asks are clearly understood.