January 27, 2022, New Delhi: The Omicron variant is driving a massive surge in daily COVID cases in India by over 60 times in the last 1 month. For instance, 40% of the districts in five poll-bound states, including Uttar Pradesh, Punjab, Uttarakhand, Manipur and Goa now have a test positivity rate (TPR) of over 10% and rising every week. At the state level, Uttar Pradesh has witnessed a jump of 48% in the daily cases for the week ending on Jan 22 as compared to the previous week ending on Jan 15. The number for Punjab stands at 41%. A similar rise in cases has been observed in Uttarakhand, Goa and Manipur.

With Assembly Election in 5 poll-bound states approaching amidst the rise in COVID cases, the Election Commission on Jan 8 had banned political parties in these states from holding roadshows and physical rallies until Jan 15, which was then extended till Jan 22. The Election Commission will take stock of the situation of the five poll-bound states and decide on physical rallies. The commission on Jan 17 had postponed the election in Punjab to Feb 20 due to the Guru Ravidas Jayanti celebrations in which 20 lakh voters were likely to miss polling. Elections in Goa, Uttarakhand, Manipur and Uttar Pradesh are set to commence from February 10th – March 10th. Though the CEC announced that elections will be conducted with COVID protocols and put a ban on all rallies for a couple of weeks in light of the prevailing COVID situation, many citizens still remember how during the 2nd COVID wave in March-April 2021, elections in several states led to rallies, gatherings and broken protocols. Complaints of gatherings from poll-bound states have been rampant on social media platforms.

At a country level, now 52% of districts or 379 districts have a weekly positivity rate above 10% and that includes 40% of the districts in the 5 poll-bound states. According to the World Health Organisation (WHO), the TPR below 5% means virus transmission is under some control, however, a number above this percentage means the rate of infection will rise. In Punjab, 19 out of 22 districts have a TPR of more than 10%, with 8 of them having a TPR of over 20%. Similarly, 11 districts each in Manipur and Uttar Pradesh, 6 in Uttarakhand, and both in Goa have weekly TPR above 10%.

Post-release of the election schedule by the Election Commission, many citizens shared their views and concerns on LocalCircles and when the platform conducted a survey on Jan 9th about what should be done, 31% of citizens were in favour of postponing these state elections altogether. LocalCircles has conducted another survey to understand if the opinion of citizens about holding Assembly Election across five poll-bound states has changed in the last 2 weeks. The survey received 10,310 responses from citizens located in 292 districts of India including 3928 responses from districts in these 5 states.

The question asked citizens, “40% of districts in poll-bound states now have TPR higher than 10% and the same is rising in many other districts. With elections scheduled for Feb 10 – Mar 10, what is the best approach at this time?” In response, 30% of respondents said “Postpone elections by 1-2 months”, and 25% said “Postpose elections by 3-4 months”. 41% of respondents said “Have elections as scheduled” and 4% did not have an opinion. On an aggregate basis, 55% of citizens now believe that elections should be postponed in poll-bound states. The survey received 10,310 responses including 3928 responses from residents of the 5 poll-bound states. 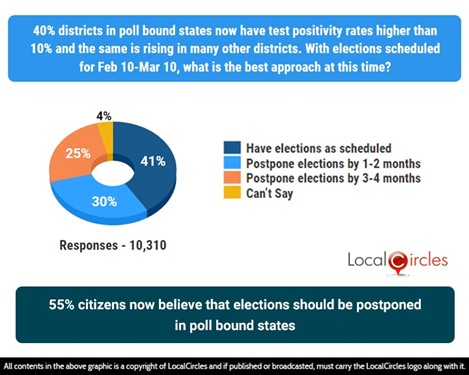 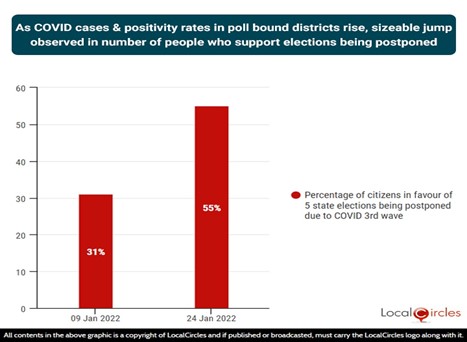 As COVID cases & positivity rates in poll-bound districts rise, sizeable jump observed in the number of people who support elections being postponed

Sachin Taparia, Founder of LocalCircles, said “Per our understanding, the current term of State Assemblies of Uttarakhand, Punjab, Goa and Manipur are due to expire in mid-to late-March and that of Uttar Pradesh in mid-May. Given the feedback from people, we would like Election Commission to consider postponing the election date in the states of Uttarakhand, Punjab, Goa and Manipur by 2-3 weeks such that counting can still take place before the terms expire. In the case of Uttar Pradesh, a similar consideration may be given such that counting/results deadline can still be the same as other states but the polling phases are started at a later date than Feb 10th.

“With the latest research indicating that a new Omicron sub-variant BA.2 is also prevalent in India in addition to the original BA.1 variant, the risk of both infection and re-infection is high. Despite a ban by Election Commission on rallies, if the elections dates are in February, it is likely to lead to gatherings of different types leading to worsening of the situation, which is something that is best avoided. In addition to that, the voter turnout is likely to be impacted. By moving polling dates to early March where possible, both these issues can be addressed”, he continued.

LocalCircles will share the findings with the Election Commission for their consideration and action so at least they know the pulse of the public and they are taking an informed decision regardless of what it is.