8 years of Swachh Bharat: 6 in 10 surveyed give thumbs up to better municipal responsiveness and improved civic sense among children but not happy with lack of functioning public toilets 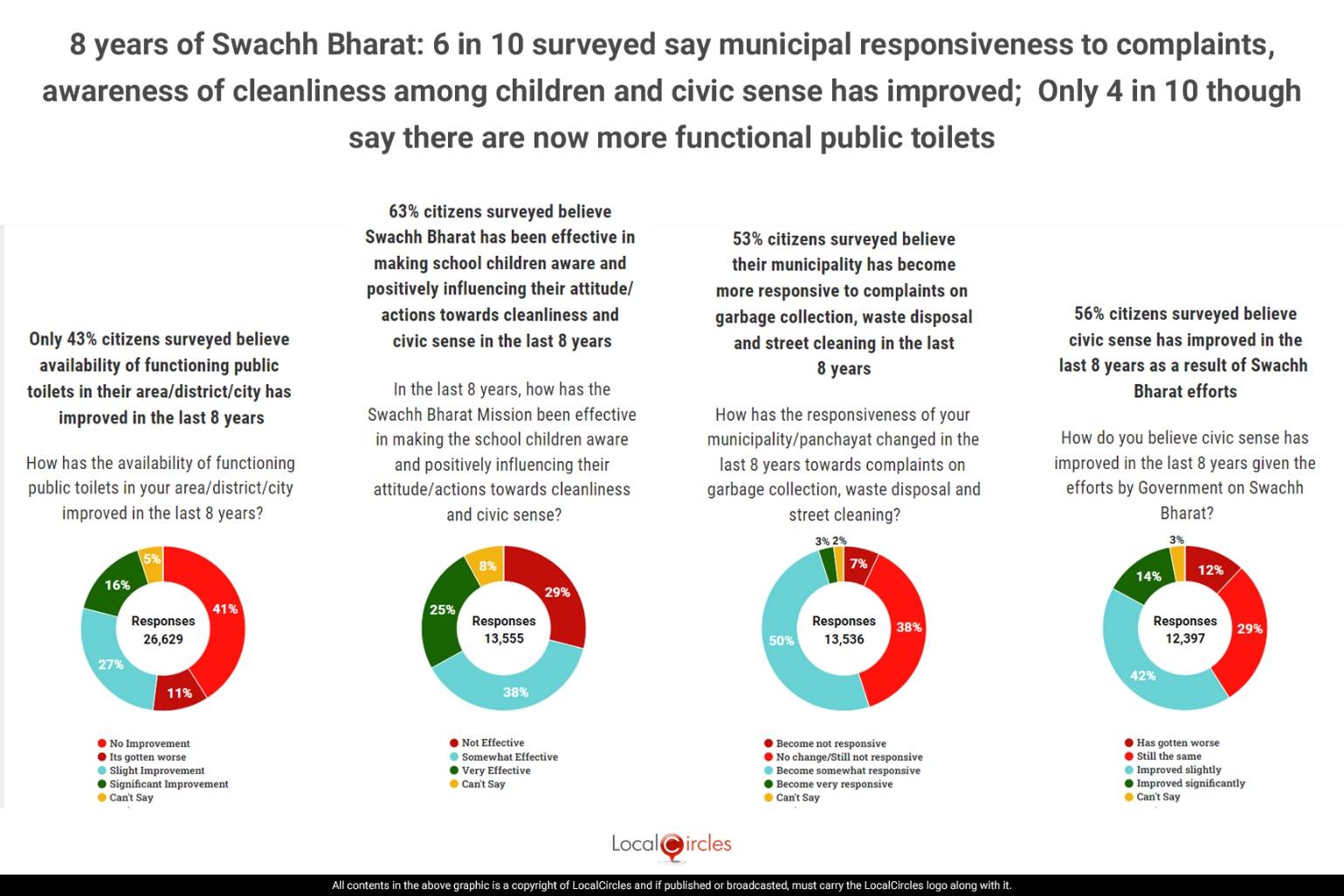 October 1, 2022, New Delhi: This year on October 2nd, India completes eight years of Swachh Bharat Mission with a 15-day campaign to mobilise citizen action and reinforce commitment towards realizing the vision of Sampoorn Swachh villages, the concept of sanitation as everyone’s business and promoting garbage less cities. The ‘Swachh Amrit Mahotsav’ campaign this year from September 17 to October 2 is a reminder to accelerate the mission objectives of Open Defecation Free (ODF)-Plus villages.

When it comes to metros, cities and towns, the cleanliness and waste management depends on the citizens and the municipalities. This has been proven time and again with some of cities like Indore, Surat, Mysore, Vijaywada, Navi Mumbai, Pune, Bhopal, Vadodara, Chandigarh ranking among the cleanest in the country. Taking their cue from these cities, many others have started putting in more efforts to better manage city waste through sorting, recycling and reuse of waste.

In November 2021, for the fifth consecutive year, Indore was awarded the title of India’s Cleanest City under Swachh Survekshan, while Surat and Vijayawada bagged the second and third spots respectively in the ‘more than 1 lakh population’ category.

While a sense of competition amongst cities is good as it makes everyone a stakeholder, the key is that the focus doesn’t remain just the ranking and delivery on the parameters associated with the ranking. Hence LocalCircles, which hosts India’s Swachh Bharat Circle or Community since October 2014 went out to the people across the country to get feedback on state of affairs on the ground on what matters. The survey covered key issues like availability of functional public toilets, responsiveness of municipalities towards complaints of garbage collection, waste disposal and street cleaning, civic sense amongst public at large and awareness of civic sense and cleanliness amongst children.

The first survey question asked respondents, “how has the availability of functioning public toilets in your area/ district/ city improved in the last 8 years?”. In response, 41% out of 26,629 respondents described the situation as “no improvement” while 11% felt “it’s gotten worse”. There were however, 43% who felt the facilities have improved. Of these, 16% of the respondents described the progress as “significant improvement” and 27% felt there was a “slight improvement”. In addition, 5% were noncommittal. Overall, 52% respondents were not satisfied with Government’s efforts to make functioning public toilets available in their area even after 8 years of the mission being rolled out.

As has been documented by government and research reports that having access to toilets is not sufficient if not well maintained or as seen in cities, people are not willing to shell out normally less than INR 2 to help the local bodies including the panchayats to employ someone to keep it clean. The result is many people in cities and towns continue to defecate or urinate in the open, though in fewer numbers than before since the government embarked on the campaign on a mission mode including building more toilets both public and in rural homes. According to a World Bank report in 2020, Swachh Bharat mission has been successful in increasing the coverage of safely managed toilets and led to a decline in open defecation among rural households. However, as far as public toilets are concerned, while major cities have most of the functioning, the situation on highways, in smaller cities and rural districts continues to be dire. 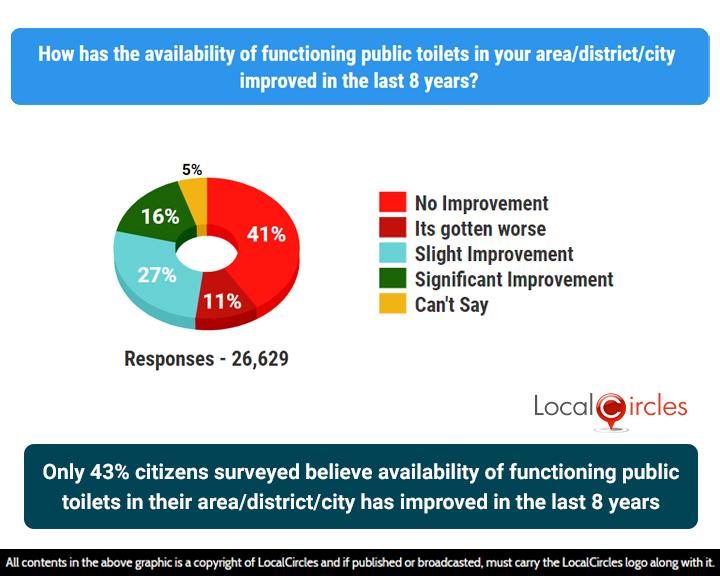 As the annual awards by the government and various civil societies reveal, many civic bodies and panchayats are making efforts to improve the condition of cities and villages. Many have implemented a system to register complaints and track grievances. But more needs to be done for a meaningful and sustained impact. Currently, as seen in cities like Delhi or Patna among others, people do not make the effort to help in segregation of waste or proper disposal. The result is that one can often find waste spilling on roads and garbage dumped on empty plots. Similarly, it is a common sight of streets being cleaned manually by municipal sweepers, polluting the environment and eventually the dust settling back on the streets for them to clean the next day.

Where civic or local authorities are concerned, what has changed or improved according to citizens' perception? LocalCircles survey posed the question “how has the responsiveness of your municipality/ panchayat changed in the last 8 years towards complaints on garbage collection, waste disposal and street cleaning?” Out of 13,536 respondents to the question 45% are not happy with 38% out of this group describing the situation as “no change/ still not responsive” while 7% felt the civic authorities are “not responsive”. On the other hand, 53% of respondents gave a green nod with 50% of them describing the situation as “become somewhat responsive” and just 3% opting for “become very responsive”. Of the total respondents to this survey question, 2% were undecided. 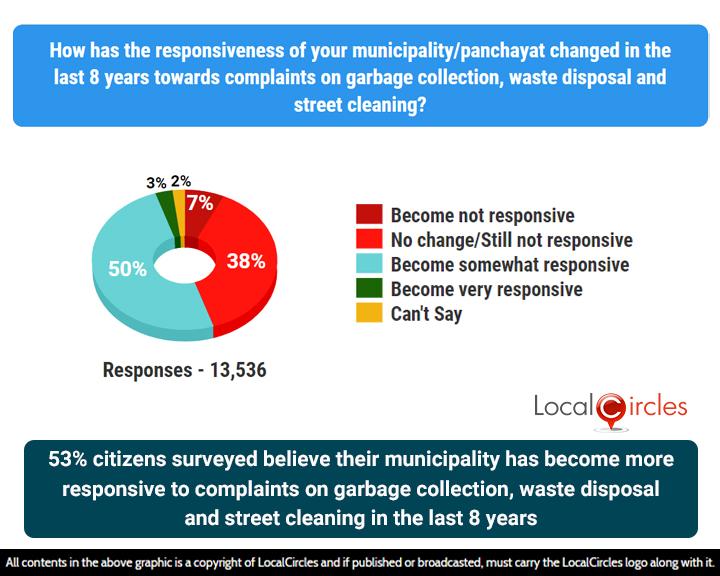 The next survey question sought citizen feedback on civic sense asking them “Do you believe civic sense has improved in the last 8 years given the efforts by the government on Swachh Bharat?” This question received 12,397 responses out of which 56% citizens felt there has been some positive impact. The breakup of data shows 42% feel civic sense has “improved slightly” while 14% feel things have “improved significantly”. Of the remaining respondents, 12% feel this has “gotten worse”; 29% feel things are “still the same’ and 3% are undecided.

While early in the mission there was strong momentum which fizzled away within the first few years. The public engagement in Swachh Bharat is near zero now except the top 15-20 clean cities where citizens and municipalities are working towards the cause of clean city. A renewed civic sense awareness campaign must be conducted regularly at local levels with the right incentives and penalties so citizens and civic bodies work together towards a clean city. 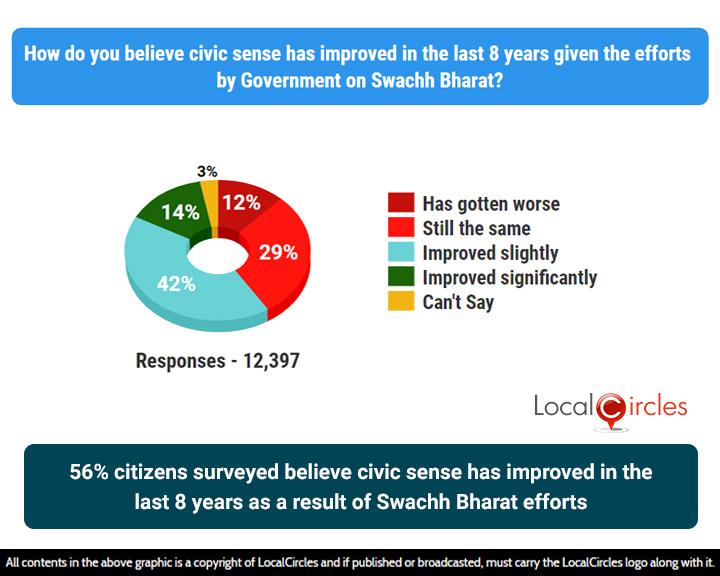 38% feel Swachh Bharat campaign has been “somewhat effective” in making children aware about need for cleanliness; 25% say it has been “very effective”

The final survey question asked citizens “In the last 8 years, how has the Swachh Bharat Mission been effective in making school children aware and positively influencing their attitude/ actions towards cleanliness and civic sense?” 29% out of 13,555 respondents to the question felt it has not been effective. However, nearly 2 out of three respondents feel there is improvement with 38% describing it as “somewhat effective” and 25% feeling it has been “very effective”. But there were also 8% respondents who did not give a clear response. The awareness amongst school children has been the single biggest positive of Swachh Bharat Mission and something that must be built upon. 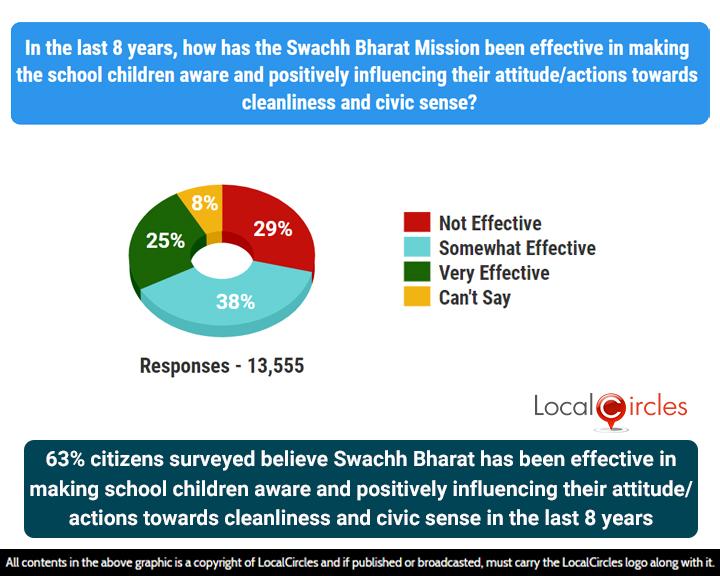 In summary, the survey finds that 8 years post the Swachh Bharat Mission was launched, it has had a positive impact on municipal responsiveness towards complaints of garbage pickup, waste disposal and street cleaning. It also finds that civic sense amongst public at large has improved up to some extent due to the mission and it has had a positive impact on school children who are more aware about cleanliness and civic sense. The survey also brings out that while efforts have been made to build new public toilets, only 4 in 10 surveyed believe that functional public toilets have increased in their area thereby indicating that while they have been built, they are not necessarily being maintained for use. All in all, the mission needs another booster dose so cleanliness is visible all across the country and not just in the top 20 clean cities.

The survey received 65,000 responses from citizens located in 309 districts of India and 62% respondents were men while 38% were women. 48% of the respondents were from tier 1 districts, 31% from tier 2 districts and 21% were from tier 3, 4 and rural districts. The survey was conducted via LocalCircles platform and all participants were validated citizens who had to be registered with LocalCircles to participate in this survey.