With rising prices, 29% Indian households surveyed downgrade the edible oil they use; 17% have cut discretionary spending 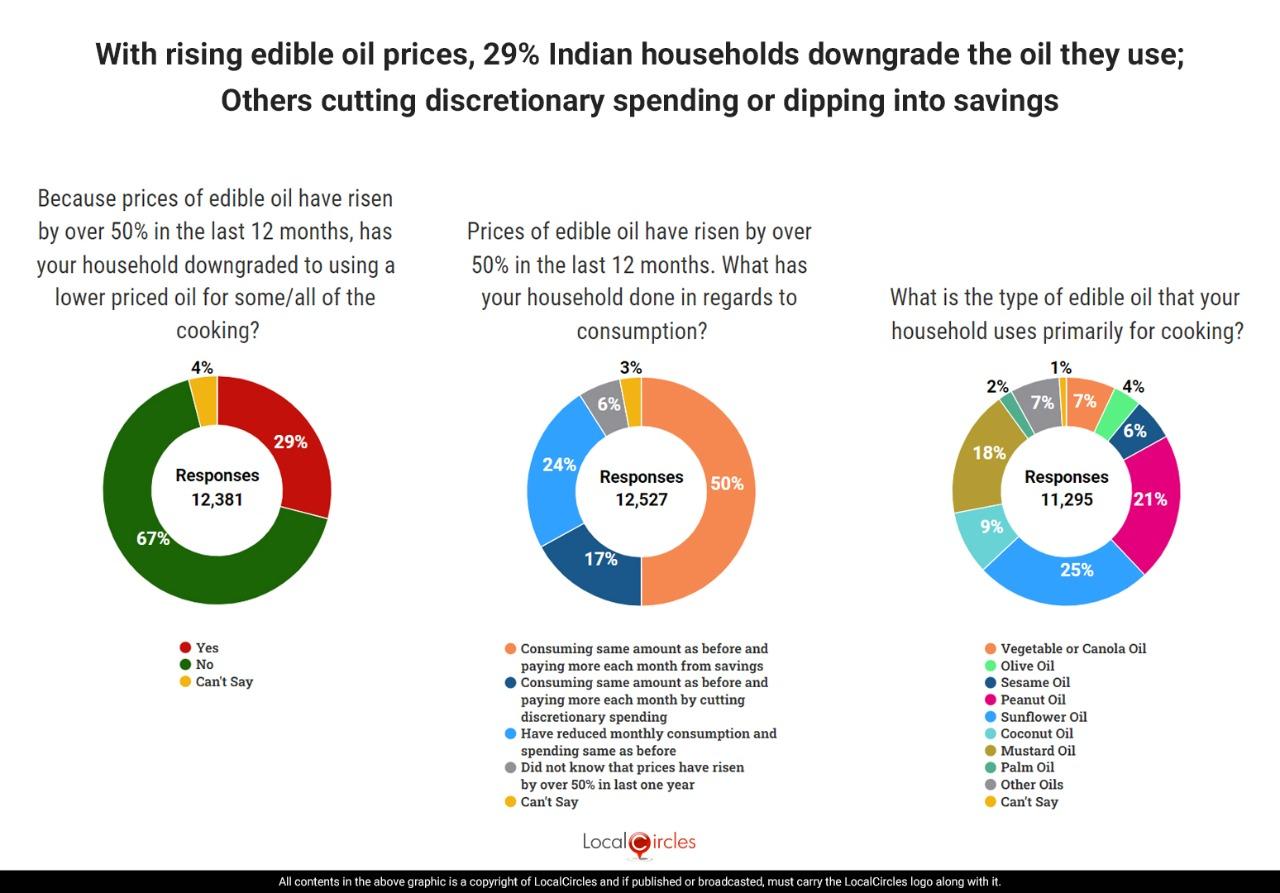 April 12, 2022, New Delhi: As prices of edible oils rose over the last 12 months, the low-and middle-income households from across India have been feeling the pinch. Prices of most edible oils—sunflower oil, peanut oil, canola oil, sesame oil, coconut oil, soyabean oil, mustard oil, palm oil, olive oil—which Indian households use for cooking, have increased 50-70% more than pre-COVID levels. For instance, the price of sunflower oil, used by the majority of Indian households, increased from INR 98 per litre in mid-February 2019 to between INR 180 and INR 250 per litre, depending on the brand in use. According to industry experts, domestic edible oil prices have risen by 50-100% in the last 12 months, and by 25-40% in the last 45 days. With the ongoing geopolitical tension fuelled by Russia’s invasion of Ukraine, the RBI Governor said that edible oil prices will remain at an elevated level in the near future. The Governor was speaking while announcing the inflation outlook for the current fiscal, which is projected at 5.7%, up from 4.5% forecast in the February meeting.

The price rise in edible oil has also been cited due to unfavorable weather conditions in major-oil exporting countries, coupled with COVID-19 pandemic, among other factors. India imports about 85% of soybean oil from Argentina and Brazil, while 90% of sunflower oil is imported from Russia and Ukraine, as per media reports, while Indonesia and Malaysia are major exporters of palm oil to India. The rise in prices of edible oil is forcing the poor and middle-class families to opt for cheaper and low-quality oils, which in the long run leads to health risks, including thyroid, stomach cancer and weaker intestines. The prices are further expected to rise in the coming days. Although the government has stepped in to provide relief, the price surge in edible oils continues to upset household budgets and consumption patterns. The Government has slashed the prices of edible oils six times in 2021. In December last year, it reduced the import duty on refined palm oil to 12.5% from 17.5% to rein in the prices of the commodity. According to data from retail intelligence platform Bizom, the prices of edible oils such as sunflower oil, soybean oil, groundnut oil, mustard oil and palm oil dropped by 10-30% from January peaks. The same report added that the average contribution of edibles oils’ inflation to overall food inflation has declined to 1.3%, from 3% in FY-21 and is close to the pre-pandemic average. However, despite the correction, the price of these commodities remained substantially higher than pre-COVID levels.

The first question in the survey asked household consumers, “What is the type of edible oil that your household uses primarily for cooking?” In response, 7% said “Vegetable or canola oil”, 4% said “Olive oil”, 6% said “Sesame oil”, 21% said “Peanut oil”, 25% said “Sunflower oil”, 9% said “Coconut oil”, 18% said “Mustard oil”, and 2% said “Palm oil”. 7% of households said they use “Other oils” for cooking and 1% couldn’t say. Basis community discussions, oils such as soyabean oil formed a major part of the “Other oils” category. On an aggregate basis, sunflower, peanut and mustard oil are top-3 edible oils used by Indian households for cooking. This question in the survey received 11,295 responses. 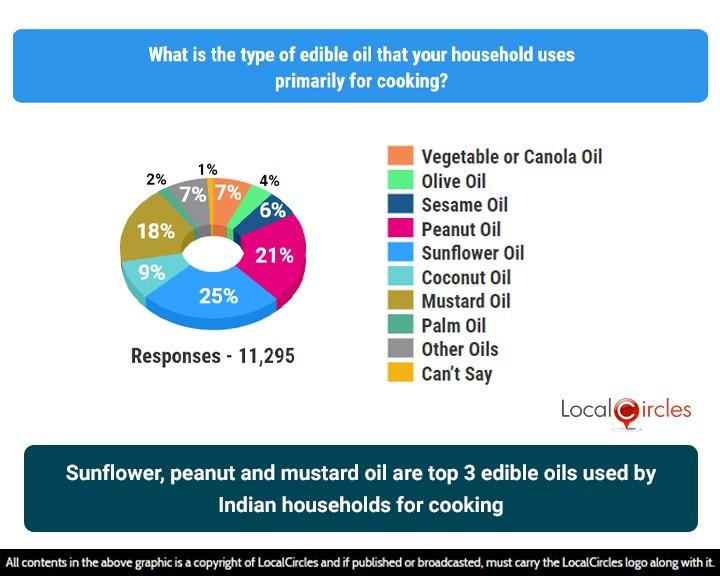 As edible oil prices have risen, 24% of Indian households have cut consumption while 67% are paying more for it by reducing spending and savings 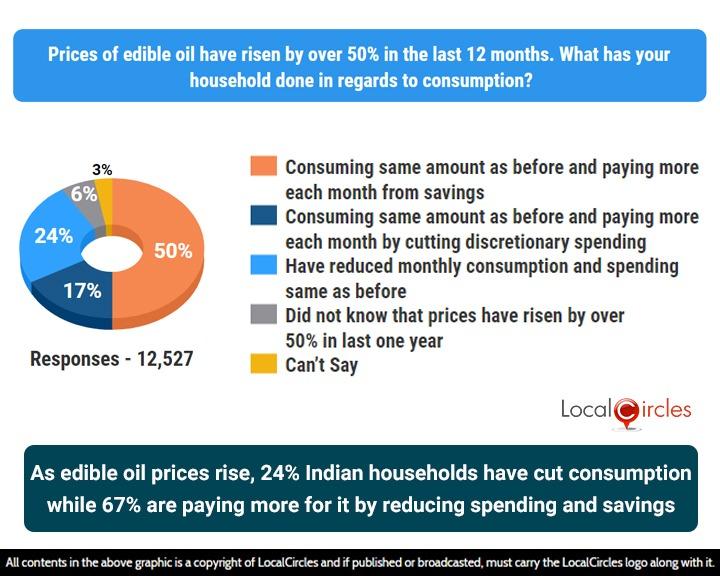 With edible oil prices rising over 50% in a year, 29% Indian households have downgraded their cooking oil

The rise in prices of edible oils is forcing some of the low and middle income to opt for cheaper and low-quality oils, which in the long run can potentially lead to health risks, including thyroid, stomach cancer and weaker intestines. The following question asked household consumers, “Given the prices of edible oil have risen by over 50% in the last 12 months, has your household downgraded to using a lower priced oil for some/all of the cooking?” In response, the majority, 67% of the households said “No”. 29% said “Yes” and 4% couldn’t say. This question in the survey received 12,381 responses. This indicates that 29% of the household have downgraded the type of edible oil they used and have moved away from their preferred choice which could also have health implications. 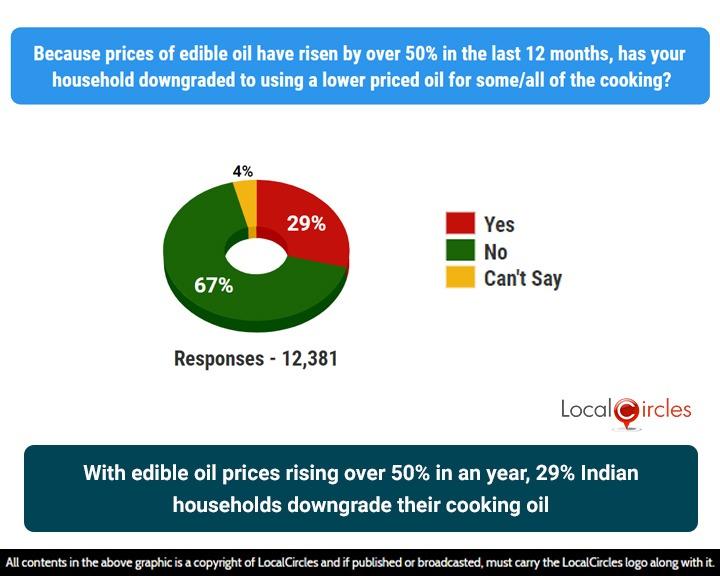 In summary, the findings of the survey indicate that among edible oils, most Indian households prefer to use sunflower, peanut and mustard oil for cooking. With prices of many of these cooking oils rising by 50% in the last 12 months, 24% of Indian households surveyed said they have cut its consumption while 67% are paying more for it by reducing spending and savings. Another way, Indian households are coping with this price increase is by downgrading their cooking oil to a cheaper alternative, which in the long run could have health risks. In the survey, 29% of Indian households said that they have downgraded their cooking oil. The Government has reduced agri-cess on crude palm oil again recently in February this year to 5% and the basic rate of duty on crude palm oil to 12.5% and on crude soybean and sunflower oils to 17.5%. While these moves have provided some relief, more relief needs to be given. In addition, practices like black-marketing, hoarding, and unfair trade practices need to be kept in check by enabling consumers to report and act on them. This is non-existent today and the only actions against such practices happen when a food or legal metrology inspector makes a rare visit and penalises the violations. Also, according to people, the Government must consider capping the trade margin on edible oil till the prices come back to normal levels. This will ensure that no manufacturer can publish inflated MRPs on edible oil products, a practice commonly used to enable the retailer to display and offer big discounts.

LocalCircles will escalate the findings of this study to the key stakeholders in the Central Government for their action and consideration.