LocalCircles did a deep dive in to this issue reported by consumers and conducted a 3-poll survey to assess the consumer pulse on it. The survey received a total of 23,000 votes from across the country. 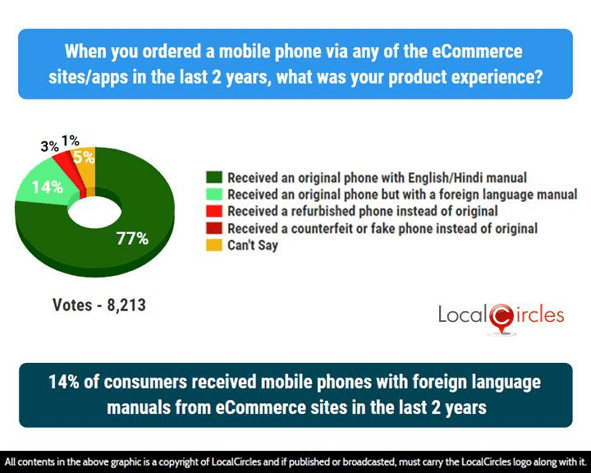 The first question asked consumers when they ordered a mobile phone via any of the ecommerce sites in the last 2 years, what was their product experience. 14% said they received an original phone with a foreign language manual while 77% said they received an original phone with an English/Hindi manual. 3% said they received a refurbished phone instead of original and just 1% said they received a counterfeit or a fake phone. This indicates that counterfeit mobile phones is not as big an issue as some may think. However, mobile phones intended for say the Chinese market are being shipped to India via international and domestic ecommerce sites. On further research, LocalCircles found out that sellers located abroad and in India are listing products at attractive prices and discounts. While the product is genuine, it is for a foreign market and not for sale in the Indian market.

The consumers reported that they face issues either when they are setting up the phone in case they need assistance because the manual is in foreign language or later when they have a warranty issue and the brand’s local service center in India denies warranty support.

12% consumers in the next question said they are able to purchase phones or models not launched in Indian market from ecommerce sites. 40% said they were not able to do so while 48% were unsure about it. 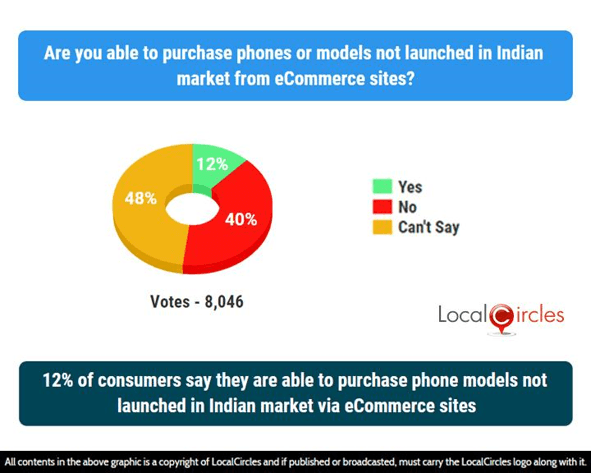 Per several consumers, this practice has been going on for the last few years now and such sellers somehow have managed to continue their modus operandi. This is something that could be addressed to some extent by ecommerce platforms requiring sellers to provide detailed product-market fit and standards declarations and certifications. All mobile phones selling to Indian consumers (offline or online) must have the due BIS CRS certification in place. Any phones with foreign manuals, that are not packaged for the Indian market are not likely to be BIS CRS certified.

The final question asked consumers which specific phone brand did they order via ecommerce sites where the manual received was in a non-English and non-Indian language only. 17% said Xiaomi, 12% said Samsung, 3% said OnePlus, 3% Apple and 7% said Vivo. 17% said others while 41% were unsure about it. 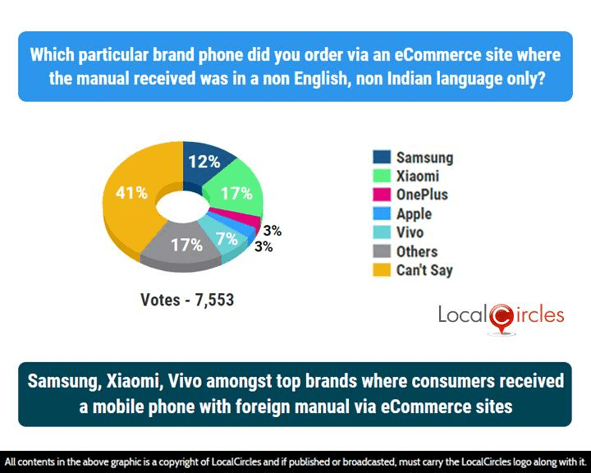 Clearly, some of the leading brands can be found listed by the consumers and in the poll. These brands and all others must engage with the various domestic and international ecommerce platforms more effectively to filter out any such seller listings. In this age of social media and consumer expectations for instant answers, if a customer’s warranty request cannot be honoured, the brand does risk facing a direct or indirect loss in its reputational value. The ecommerce platforms too potentially face the ire of the consumer as many consumers tend to hold the platform responsible for the issue and not the seller.

LocalCircles will be sharing this report with the ecommerce platforms as well as Government stakeholders so the gaps outlined in this report can be addressed.