July 5, 2021, New Delhi: Aimed to give more power to the online buyers vis-à-vis prevent unfair trade practices by eCommerce platforms, the Ministry of Consumer Affairs, Food and Public Distribution of India has proposed amendments to Consumers Protection (eCommerce) Rules, 2020. It has come up with proposed draft amendments and invited suggestions to it on duties of eCommerce entities, liabilities of marketplace eCommerce entities, along with duties of sellers on marketplace, and duties and liabilities of inventory eCommerce entities, amongst other issues. The deadline for submission of responses to the Ministry is July 6th, 2021.

After media reports emerging about the Department of Consumer Affairs proposing draft amendments to eCommerce Consumer Protection Rules 2020, LocalCircles received thousands of inputs from consumers located across India. While there were some consumers who expressed support for such rules, majority of them raised questions about the effective inclusion of various electronic and digital sales of products and services transaction and the effective applicability of these rules including the proposed amendment.

The question asked consumers about what all sectors of eCommerce should be regulated under these rules. In response, 7% said “(1) eCommerce marketplace and eCommerce inventory models”, 3% said “(2) ePharmacies, eGroceries and all such sectoral products sales over the internet”, and 14% said “(3) all electronically sold services like app-based food delivery, app taxis, etc.” Breaking down the poll, 7% voted for “1 & 2” options that should be governed by electronic commerce rules, 4% voted for “1 & 3”, and 5% said “2 & 3”. The majority of 41% of consumers voted for all “1, 2 & 3” from the aforementioned options. There were also 10% of consumers who said that “none of the above should be regulated”, while 9% did not have an opinion. On an aggregate basis, 81% of consumers want sales of products and services over electronic or digital network to be governed by a set of electronic commerce rules. This question in the survey received 16,236 responses. 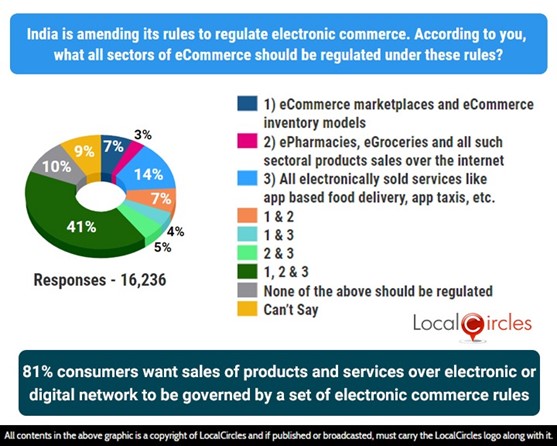 Consumers via LocalCircles also discussed how effective and in advance display of information about eCommerce services like Uber, Ola app taxis i.e. taxi vendors/drivers, vehicle condition, license validity, PUC clearance of vehicle etc. will enable them to make informed decisions. Similarly, consumers discussed app based hotel ecommerce services like Oyo, AirBNB etc. and how advanced information about the property, owner, incidents/crime at location, fire and building safety clearances etc. will be useful information for them to make an informed decisions.

Various marketplaces like Amazon, Flipkart, Snapdeal were also subject of discussions on how consumers are challenged at times in reaching out to the sellers in regard to counterfeit or fake products and the need of a mechanism where access to such sellers must be enabled by the marketplaces in a seamless manner. Also, consumers raised the issue of certain sellers after selling counterfeit and poorly rated by consumers are able to again list the same product easily as new and sell again. Many consumers also raised issues about platforms like Facebook Marketplace not complying with any legal metrology rules and permitting products and services sales over the internet. Issues were also raised by consumers about many FMCG manufacturers platforms not listing MRP and best before dates.

Consumers also raised issues with certain eGrocery and epharmacy platforms not presenting product best before date or shelf life to consumers leaving the consumers many a times with spoilt or expired products. Consumers have also raised the need of a seamless and efficient process for accepting returns by egrocery platforms where the return item value may not be significant and hence leading to many consumers giving up due to a cumbersome returns process deployed by eGrocery platforms. Issues were also raised about certain eGrocery platforms not following basic packaging standards and packaging products like insecticides with other human consumption and edible products. 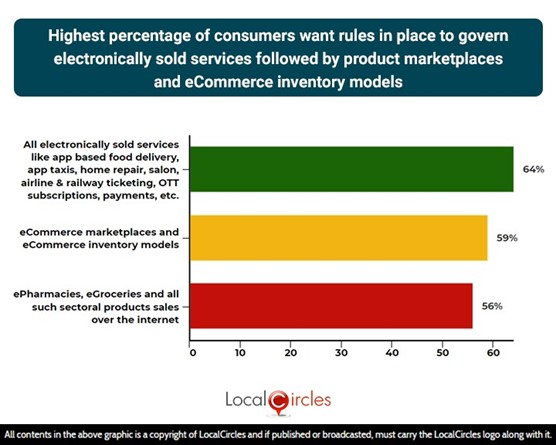 LocalCircles in 2019 conducted an extensive exercise of crowdsourcing from consumers, the definition of ecommerce in India and shared the same (enclosed) with the Department of Consumer Affairs. As a result, the definition of eCommerce in the Consumer Protection eCommerce rules 2020 was amended to “all goods and services bought or sold over digital or electronic network including digital products”, the details of the same, especially pertaining to the services eCommerce are still completely missing from even the eCommerce Consumer Protection rules amendment issued by the Department of Consumer Affairs on July 21st, 2021.

LocalCircles in the course of the next two weeks will be conducting extensive consumer consultations to gather detailed consumer pulse on proposed amendment to Consumer Protection (eCommerce) Rules 2020. LocalCircles will also write to the Department of Consumer Affairs requesting a two-week extension till July 20th to submit aggregate consumer feedback on the proposed amendment. Also, it will be requesting that the department conducts an in-person or video consultation with key consumer bodies so the pulse of the consumer finds its due place in the amended Consumer Protection (eCommerce) Rules 2020. 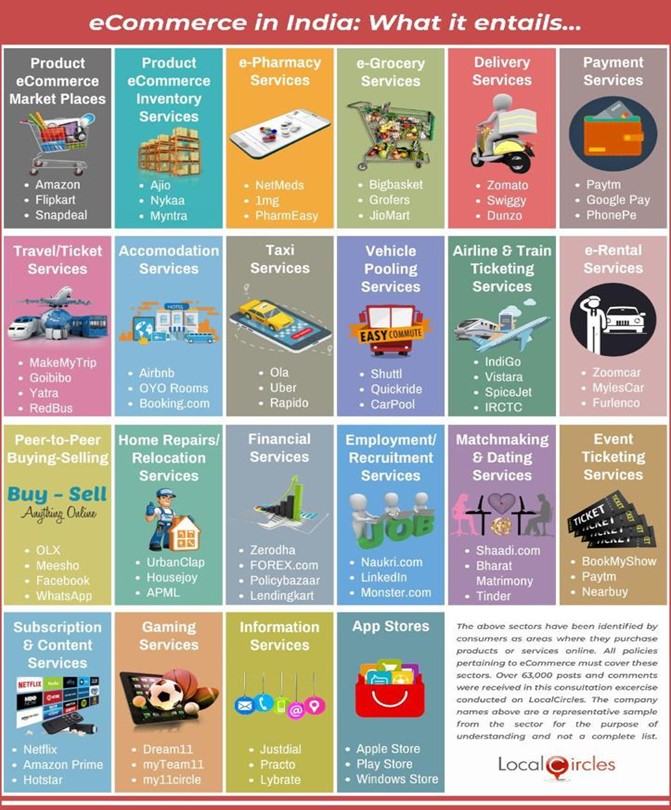