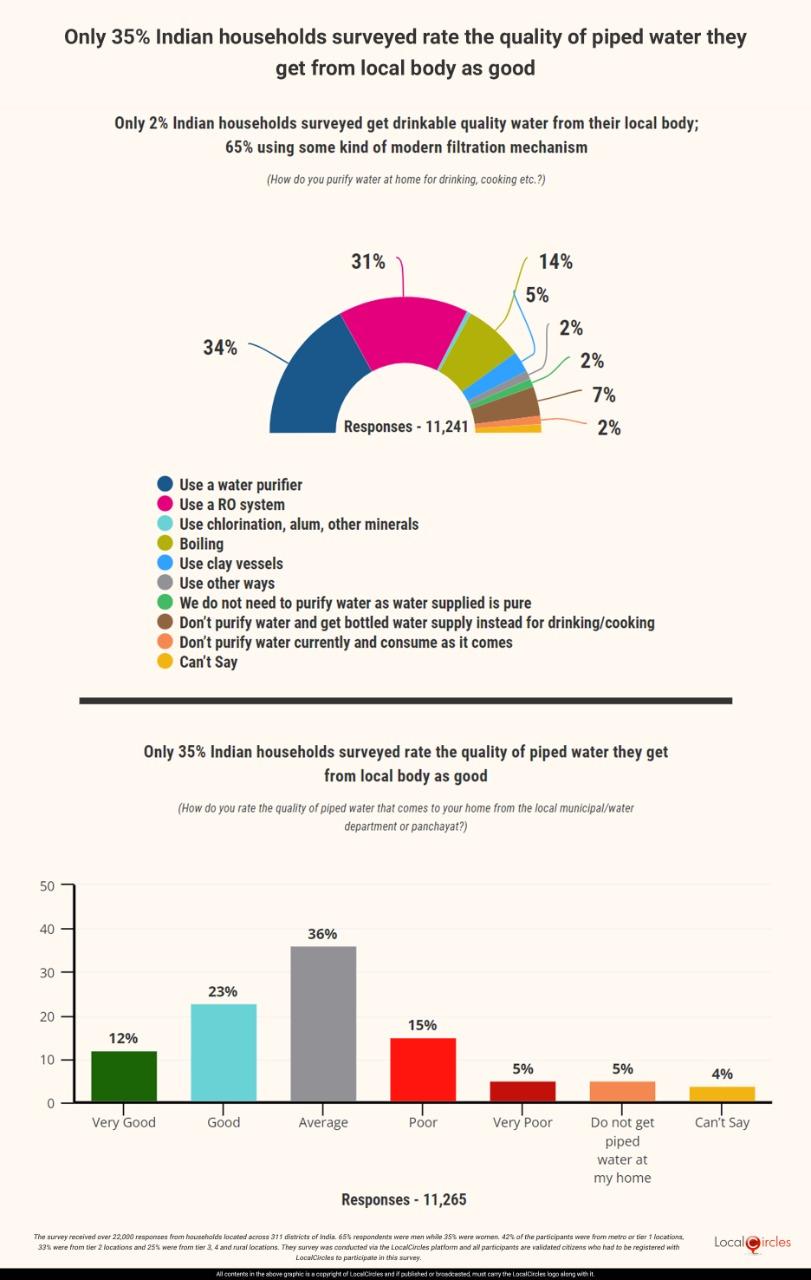 November 03, 2022, New Delhi: Clean drinking water is essential for good health as contaminated water has been the main reason India faces a heavy burden of water-borne diseases including cholera, diarrhoea, dysentery, hepatitis A, typhoid, polio, among others. It is estimated that around 37.7 million Indians are affected by waterborne diseases annually; 1.5 million children are estimated to die of diarrhoea alone and 73 million working days are lost due to waterborne disease each year, according to a new study co-authored by Pradeep Kumar and published in BMC Public Health journal in May 2022.

Given the urgent need to improve piped water supply in India, the Government formed a Ministry of Jal Shakti in 2019. Via this ministry, under the Jal Jeevan Mission (JJM), it had set a target in 2019 to ensure piped water to all rural households by 2024. So far, 10.2 crore rural households, or about 53% of the eligible population, has been provided this facility, which is a 37% rise from 2019.

While piped water is supposed to be the main source of safe drinking water to households, it is not often the case as many studies have revealed. “More than 6% of Indian population (of 1.3 billion) lack access to safe water, according to Water.org, a global civil society organization.

Municipality or local bodies are responsible for developing the treatment and distribution system of piped drinking water. But given the poor quality of piped water in most cities, health experts recommend that households should use some filtration methods like using water purifier, RO system, chlorination, boiling, or even storing it in clay vessels, before they consume water from any source. It is not uncommon in cities for households to invest in buying filtered water in large cans.

Based on 2017 government data, UNICEF in a report had stated that only 50% of the population in India has access to safe drinking water that is free from chemical contamination, or presence of dangerous levels of toxins, such as fluoride and arsenic. The central government in a statement released by PIB in April 2022 had stated, “As per information available with Department of Drinking Water and Sanitation (DDW&S) as reported by States/UTs, as on 04.04.2022, out of 17.01 lakh rural habitations of the country, 29,442 (1.73%) rural habitations having 1.36% population are reported to have water quality issues in drinking water sources.”

The central government statement made it clear that water being a state subject, steps for augmentation, conservation and efficient management of water resources are primarily undertaken by the respective State Governments. In order to supplement the efforts of the State Governments, the Central Government provides technical and financial assistance to them through various schemes and programmes.

LocalCircles has been receiving hundreds of complaints each year about water supply issues and quality of water. To quantify the issues, LocalCircles has conducted a survey to understand how Indian households rate the quality of piped water they receive and also if they use any form of filtration to make it safe for drinking. The survey received over 22,000 responses from households located across 311 districts of India. 65% respondents were men while 35% were women. 42% of the participants were from metro or tier 1 locations, 33% were from tier 2 locations and 25% were from tier 3, 4 and rural locations.

The first question in the survey asked Indian households, “How do you rate the quality of piped water that comes to your home from the local municipal/water department or panchayat?” In response, 12% said “Very good”, 23% said “Good”, and 36% rated “Average”. Break up of data shows 15% said “Poor”, and 5% said “Very poor”. Another 5% said they “Do not get piped water at my home”; 4% did not have an opinion. On an aggregate basis, only 35% of Indian households surveyed rate the quality of piped water they get from the local body as good. This question received 11,265 responses. 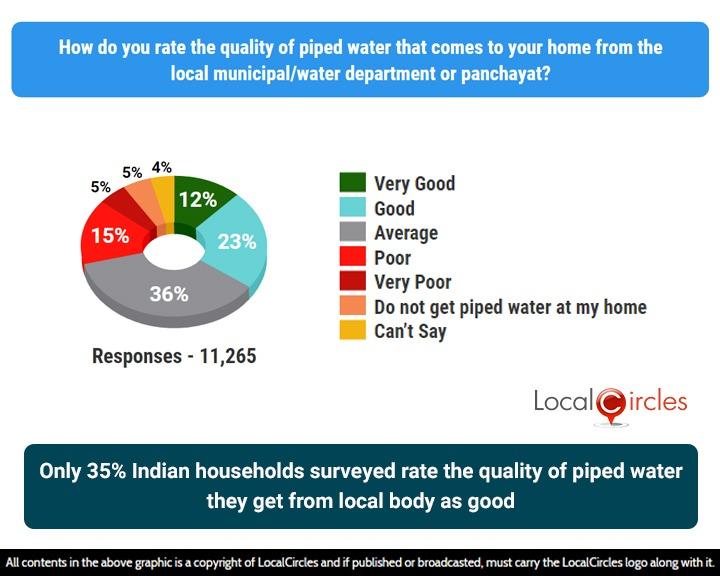 Only 2% Indian households surveyed get drinkable quality water from their local body; 65% using some kind of modern filtration mechanism

The second question in the survey focused on understanding how people are using piped water for drinking purposes, if the water they get is drinkable right away and if not, what filtration method they were using. It asked household respondents, “How do you purify water at home for drinking, cooking, etc.?” In response, 34% said they “Use a water purifier”, 31% said they “Use a RO system”, 1% “Use chlorination, alum other minerals”, 14% said “Boiling”, 5% “Use clay vessels”, and 2% “Use other ways”. 2% respondents said “We do not need to purify water as water supplied is pure”. There were 7% of Indian households who “Don’t purify water and get bottled water supply instead of drinking/cooking”, and 2% said “Don’t purify water currently and consume as it comes”. Another 2% couldn’t say how they were purifying water. On an aggregate basis, only 2% of Indian households surveyed get drinkable quality water from their local body while 65% are using some kind of modern filtration mechanism. This question received 11,241 responses. 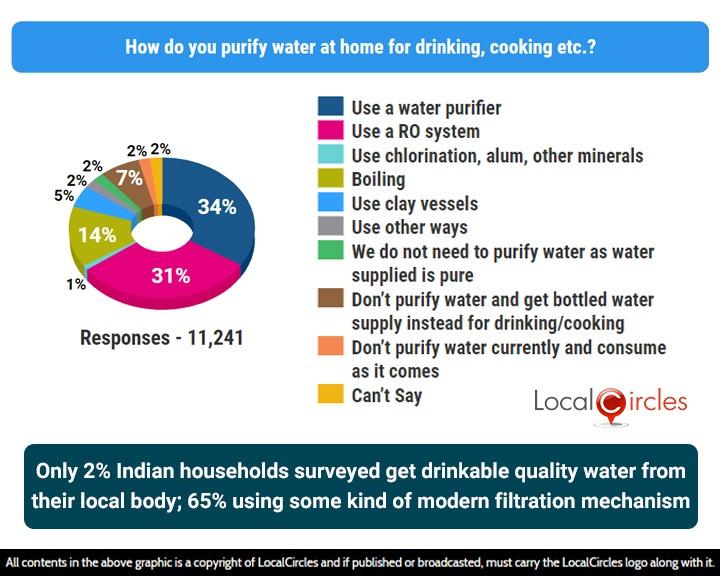 To improve this situation, the Government must consider forming mandatory standards for potable water supply to be followed by all local bodies, give them a few years to comply. Once majority have complied, the standards must be published for public reference, checks and balances, driving accountability from the water supply departments and finding any gaps early on and addressing them.

The survey received over 22,000 responses from households located across 311 districts of India. 65% respondents were men while 35% were women. 42% of the participants were from metro or tier 1 locations, 33% were from tier 2 locations and 25% were from tier 3, 4 and rural locations. They survey was conducted via the LocalCircles platform and all participants are validated citizens who had to be registered with LocalCircles to participate in this survey.