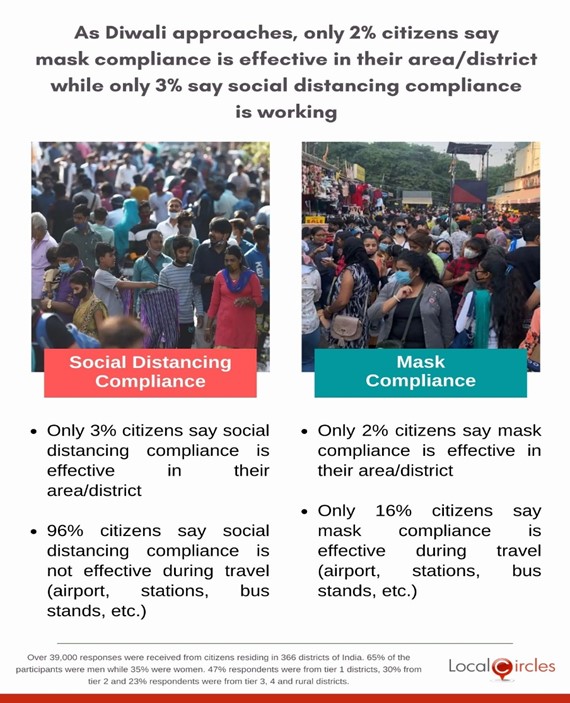 November 1, 2021, New Delhi: Diwali is just a few days away now and in many parts of India, socialising, shopping and community events are at their peak. From Government organised Diwali melas in every district to colony, society or community events, to Diwali parties in cities, socialising is back with a bang in India after a somewhat muted festive season in 2020. People from many parts of India are reporting that while all of this is happening, a large majority of people seem to have forgotten about the masking and social distancing norms. Properly worn masks are getting harder to spot in public places in tier 2 districts while a mask itself has become a rarity in tier 3, 4 and rural India. Hundreds of people are now getting together to socialise in private events, dining together with absolutely no social distancing. When asked about COVID norms, many respond saying they are vaccinated and therefore safe. While all of this is happening in many parts of India, a new subvariant of the Delta coronavirus strain —AY.4.2, originally found in the United Kingdom (UK) has been found in last 1 week in at least 6 states of India, infecting as many as 20 individuals. In the UK, the subvariant was found a month ago and now responsible for near 10% of the new cases indicating that COVID pandemic is far from over.

The Centre has warned against a rise in COVID cases amid the festive season. With the festive season at its peak, markets and temples are witnessing a huge footfall with low compliance to mask and social distancing norms. Delhi reported large crowds in popular markets like Sarojini Nagar and Lajpat Nagar in the last few weeks. In Uttar Pradesh, the Government itself has decided to hold week-long Diwali melas (fairs) in all cities across the state with administration encouraging as many people to attend these melas. Uttar Pradesh assembly elections are likely to take place early next year. While a few experts believe that a 3rd wave of COVID is not likely in India, to some others this serves as a reminder of February-March 2021 when the daily COVID case load in India hit a low of 12,000 and people were socialising, traveling and had forgotten about the masking and social distancing norms. What followed was a brutal 3rd wave leading to daily case loads higher than 400,000 with the actual case load being significantly higher as majority could not even access a COVID test and went straight to the hospital for admission.

Health experts have stated that there is a 90% risk of infection associated with two individuals not wearing a mask and not maintaining adequate social distancing. The risk gets reduced to 30% if the uninfected person is wearing a mask. The office of the Principal Scientific Advisor to the Government during the second wave, issued COVID transmission details, highlighting that droplets and aerosol were the primary ways of transmission. It stated that droplets can fall within 2 meters from an infected person, while aerosols can be carried in the air up to 10 meters. This means the virus can quickly spread from a small number of people to a very large population if COVID-appropriate behaviours are not seriously taken.

With Diwali a few days away, LocalCircles has conducted another extensive study to find out how people are complying to mask and social distancing protocols in cities and districts during the festive season. It also aims to find out compliance level during travel. The survey received more than 39,000 responses from 20,000+ unique citizens located in 366 districts of India. 47% respondents were from Tier 1 districts, 30% from Tier 2 districts and 23% were located in Tier 3, 4 and rural districts of India. 65% respondents were men while 35% were women.

With Diwali shopping and socialising on, mask compliance drops drastically with only 2% people now saying people in their area/city/district are complying well 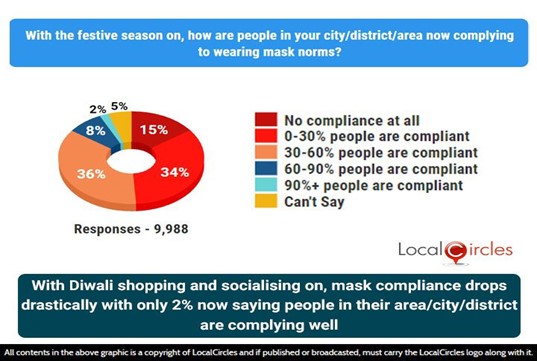 With Diwali shopping and socialising on, mask compliance drops drastically from 13% rating compliance high last month to only 2% rating it high now 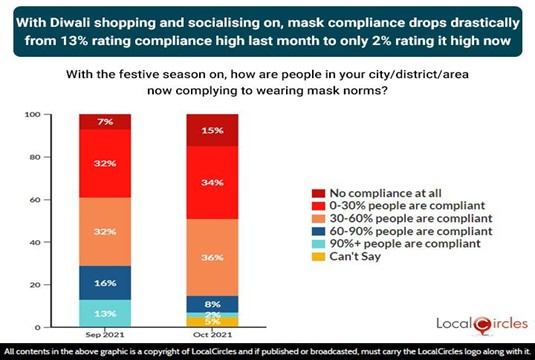 With festive travel on, only 16% of the citizens who travelled in October say mask compliance is effective during travel (airport, stations, bus stands etc.)

The festive season and ease of travel restrictions have heavily resulted in an increase in travel as people went on a pending holiday, or to visit friends and family. The September survey conducted by LocalCircles had revealed that 46% of citizens are likely to travel in the festive season, with a 60% rise in travellers from July-August. Airports, bus stands and train stations witnessed large footfall in October and the same is predicted to continue till December.

The next question in the survey sought collective response from citizens about their common experience in regard to compliance of mask norms when they travelled using flights/airports, trains/railway stations or bus/bus. In response, 4% of citizens said there was “no compliance at all”. Breaking down the poll, 34% said “0-30%” people were wearing masks properly, 27% said “30-60%”, 15% said “60-90%”, and 16% said “more than 90%”. On an aggregate basis, only 16% of citizens who travelled in October say mask compliance is effective during travel at airports, stations, bus stands, etc. This question in the survey received 9,999 responses.

In the online community discussions, it came out that while at airports mask compliance is reasonably high, it is non existent in bus stands and stations as well as road travel and limited at railway stations. Bus and road travel is by far the largest in India followed by railway travel with air travel being the smallest segment. 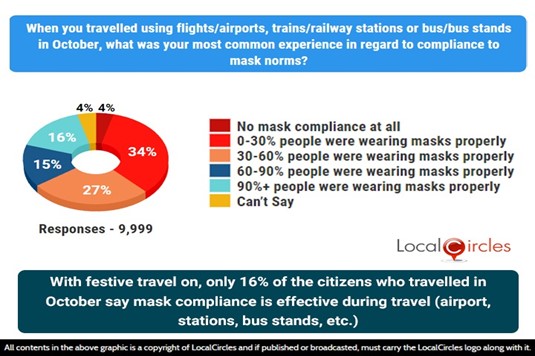 With festival travel on, mask compliance drops during travel by almost 50% from 30% rating compliance high in September to only 16% rating it high in October

The last LocalCircles survey conducted in late September revealed that 30% citizens observed high mask compliance during travel through flights/trains/buses. This number has drastically reduced to 16% in October 2021.However, the percentage of citizens saying “no mask compliance at all” has dropped from 7% in September to 4% in October 2021. On the other hand, citizens saying “60-90% people were wearing masks properly” has dropped from 22% to 15% in one month. 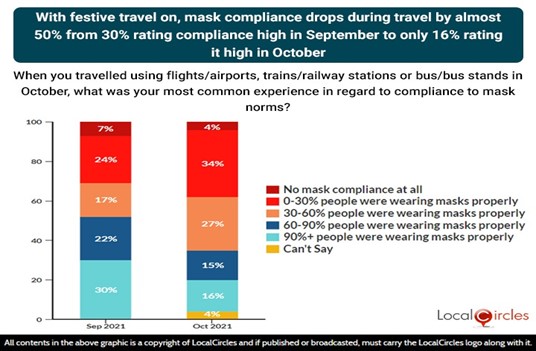 With the festive season on, only 3% citizens feel that there is good social distancing comapliance in their city/district/area 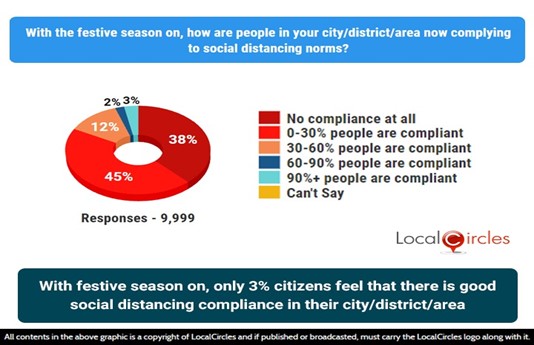 With Diwali shopping and socialising on, social distancing compliance drops by 50% from 6% rating compliance high in September to 3% in October

Previously, the LocalCircles survey conducted in September 2021 revealed that only 6% of citizens observed high mask compliance in their city/district/area. This number further fell by 50% to 3% in October 2021. Moreover, the percentage of citizens saying “no compliance at all” has increased from 25% to 38% in the same period.

In October, videos and images from many parts of India showing how social distancing norms were being violated in markets and community get togethers. 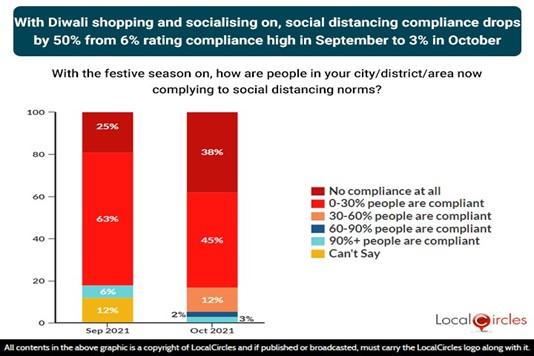 96% of citizens who travelled in October say social distancing compliance is not effective during travel (airport, stations, bus stands, etc)

The next question asked citizens about their experience in regard to compliance to social distancing norms when they travelled using flights/airports, trains/stations or bus/bus stands in October. In response, 67% citizens said there was “No social distancing compliance at all”. Breaking down the poll, 26% said “0-30%” people were complying properly, and 3% said “30-60%”, while 4% couldn’t say. On an aggregate basis, 96% of citizens who travelled in October say social distancing compliance is not effective during travel at public places such as airport, stations, bus stands, etc. This question in the survey received 9,414 responses. 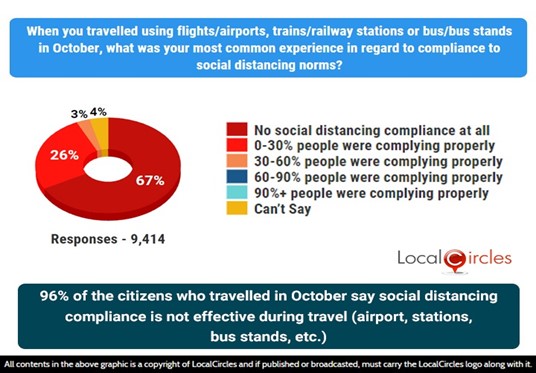 Once again, in majority of bus stands, stations, metro and railway stations, the adherence to social distancing norms has become extremely low. Even in top airports, passengers can be seen a few inches away from each other in security queues and boarding queues, all of which can be managed much more effectively. Hundreds of complaints have been received about Delhi and Mumbai airports on how there is no social distancing and worse, no effort from authorities to implement the same.

The risk of the spread of A.Y.4.2 Delta subvariant remains high with decreasing mask and social distancing compliance. It is critical that the Central Government, State Governments and District Administrations ensure that clear guidelines are formed and enforced for community gatherings and compliance to masking and social distancing norms. The authorities should not be bringing large numbers of people together for Diwali melas Further, authorities like Airport Authority of India, Ministry of Civil Aviation, Ministry of Railways must ensure compliance to social distancing norms at airports and stations. Special focus is needed on awareness creation and ensuring compliance in tier 3, 4 towns and rural districts where in some cases per feedback received the mask and social distancing compliance is at near zero levels. The last thing India wants at this stage is a 3rd wave of COVID sparked by irresponsible behaviour by public at large and encouraged by the lax approach of authorities.

The survey received more than 39,000 responses from 20,000+ unique citizens located in 366 districts of India. 47% respondents were from Tier 1 districts, 30% from Tier 2 districts and 23% were located in Tier 3, 4 and rural districts of India. 65% respondents were men while 35% were women. The study was conducted via LocalCircles platform and all participants were validated citizens who had to be registered with LocalCircles to participate in this survey.