COVID-19 pandemic impact: Percentage of citizens using cash as the primary mode of transaction reduce by 50% in 2020

November 6, 2020, New Delhi: The problem of black money – a fraudulent economic activity that usually takes place in the absence of an authentic cash bill, receipt or an invoice and as such are not taxed – continues to be a major cause for the Government to lose tax revenue. Aimed at reducing such illegal economic activities, the Government of India on November 8, 2016 implemented demonetisation of INR 500 and 1,000 currencies. The move was hugely supported by citizens from around the county, but quickly lost ground after facing implementation issues, inconvenience to deposit and withdraw money from banks, which temporarily caused the country’s economy to slow down, as well as loss of livelihood for many.

Experts argue that black money is back again in the system and demonetisation only managed to reduce the supply of it for a few years. Although demonetisation brought digital payments into mainstream in the country, the GST rolled out 8 months later enabled it further, but it has really been the COVID-19 pandemic that has accelerated it. With people becoming fearful of contracting the virus through cash or ATMs, many more started making their payments digitally, even when buying basic essentials during the countrywide lockdown. However, 4 years later, the biggest beneficiaries of demonetisation seems to be faster adoption of digital payments and digital transactions by Indian citizens.

LocalCircles conducted a survey to understand citizens’ purchasing habits with and without a money receipt, and the purpose of that transaction? It then compared this year’s findings with a similar survey released in 2019 to understand the trend among citizens transacting in cash without receipt in the last 12 months? Further, it highlights areas where black money is still getting generated in India. The survey received over 45,000 responses from more than 300 districts of India. Of which, 51% respondents were from tier 1, 34% from tier 2, and 15% from tier 3, 4 and rural districts.

With COVID-19 pandemic, there was an increase in transactions with receipt in the last 12 months 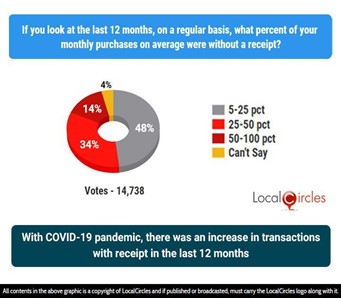 Over the years, India has witnessed a tremendous rise in the usage of digital payments, which has eventually led to an increase among consumers getting a digital receipt to their purchase. Per RBI data published in October this year suggests that India in FY20 witnessed a massive rise in volumes of digital payments to 3,434.56 crore. In five years, i.e., from the period between 2015-16 and 2019-20, digital payments saw an annual growth rate of 55.1% in terms of transaction volumes and 15.2 per cent in terms of value. Only in October 2020, the UPI-based payments hit a new milestone with 207 crore transactions.

COVID-19 impact: In 2020, 50% reduction in number of citizens who do their monthly purchases without receipt 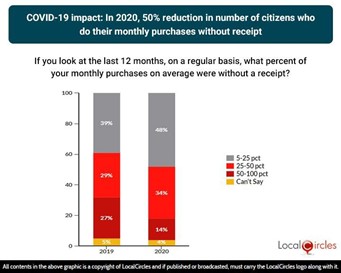 The second question in the survey has tried to understand for what purposes citizens transacted in cash without a receipt. To the question that asked “If you look at the last 12 months, for which category of purchase have you paid the most amount in cast (without a receipt)”, 15,376 citizens responded. Of which, 39% of citizens said “groceries”, 31% said “salaries of domestic staff'', 9% said “discretionary purchases and eating out”, 3% said “property, rent and home repairs”, 1% said “used vehicle”, 7% said “bribes”, while 10% said “didn’t make any purchases in cash”. 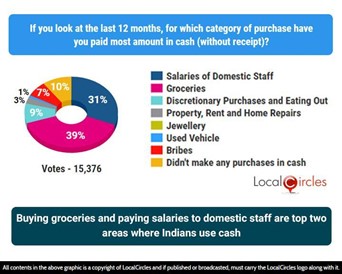 When compared with last year’s survey, this year’s results show that buying “groceries” and giving out “salaries to domestic staff” continue to be the top categories where citizens transacted in cash and didn’t produce a receipt in the last 12 months. These are mainly low-value transactions that people don’t ask for receipts or salary slips. However, Income Tax laws in India have prescribed that payments in cash cannot be made to an individual beyond the daily limit of Rs 10,000. Similarly, the laws have prescribed various restrictions on payments in cash without receipt that apply to businesses and individuals. 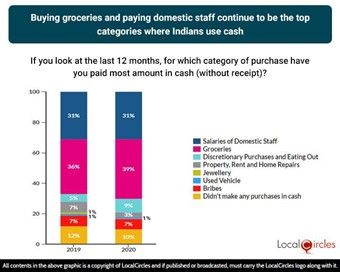 Citizens on the LocalCircles platform pointed to various areas where illegal economic activities are rampant. The third question in the survey asked, “What should be the one move that the Government should implement immediately to further reduce black money in India?”, 15,492 voters responded. Of which, 33% said “make linking of all property ownerships with Aadhaar mandatory”, 38% said “mandatory disclosure of all assets of all ministries and government employees and their direct families”, 10% said “demonetise INR 2,000 rupee note immediately”, 7% said “levy 2% transaction tax on all cash transactions above INR 10,000”, and 5% each voted for “detailed scrutiny of all individual with a Swiss Bank account” and “other things”, while 2% said “can’t say”. 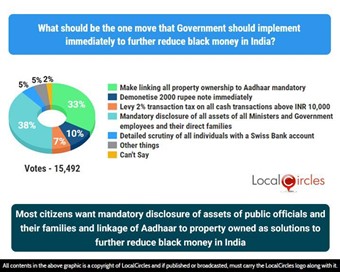 A comparison of the same question with last year’s survey indicates that the majority of citizens want the Government to make “mandatory linking of all property ownerships with Aadhaar” and “mandatory disclosure of all assets of all ministers and government employees and their direct families” as a way forward to curb black money. The recommendation from people about disclosures applies not just to Central Government and Public Sector Undertakings but also to all State Government Ministers and Employees and their direct families. One of the key issues identified by people continues to be the usage of shell companies by public officials to accept bribes. Citizens have listed how family members of corrupt public officials are listed as directors in these shell companies and graft is received as share capital at a high premium. The money received is then utilised by the promoters of the company to pay salaries to themselves or fake employees on the payrolls. 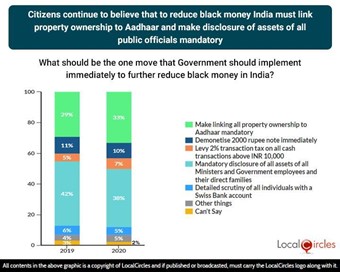 Citizens on the platform have pointed to various areas where people transact in cash to evade taxes paid to the government, via commission agents, middlemen, or brokers. People have also highlighted that even for many MSMEs, real-estate sales and purchase, sale and purchase of agricultural land, transactions continue to take place without an invoice as a norm, with wanting invoice being more of a rare exception.

Having said that, it should be a conscious effort of citizens, businesses and the Governments to join forces to drastically reduce the Black Money in India, starting from as simple as asking for cash receipt, bill or invoice for every product or service we procure or sell.

LocalCircles will be sharing these findings with key stakeholders in the Government for their understanding and action.