March 22, 2022, New Delhi: The COVID-19 cases in India continue to decline with the country recording less than 2,000 daily cases, the lowest since the pandemic began. However, seven cases of the more transmissible variant BA.2 +S:I122IT have been found in the last few weeks and over 550 cases of Deltacron, a combination of Omicron and Delta variants, have been found in the country. Scientists suggest that such developments are evidence that the coronavirus is constantly evolving. Apart from new mutations, a group of professors from IIT Kanpur have mathematically predicted that there will be a 4th wave in India from June till October this year peaking in mid-August. At such a time when new mutations and recombinants are being found, it is crucial that citizens continue to wear the right masks, follow social distancing protocols and other COVID guidelines.

The Government of India plans to resume international flights after 2 years from March 27. However, the massive COVID surges observed in the last two weeks in China, South Korea, Hong Kong, Japan, Vietnam, Germany, Netherlands, Austria and several other countries indicate that starting flights from such countries in the immediate term could pose a major risk of COVID spread for India.

Genome sequencing, on the other hand, has become more important in predicting the behaviour of the virus as well the risk associated with it. However, in India, there is a paucity of genome sequencing labs, and the Central Government has asked states to send samples of hospitalised COVID patients for gene sequencing. According to virologist Dr. V Ravi, a member of the INSACOG Steering Committee, genome sequencing takes up to 3-4 days to manually confirm the result. He was cited by the media as saying that the sequencing chip costs around INR 10,000 per sample. Moreover, five labs tasked with genome sequencing across the country were recently shut down due to lack of funds. Meanwhile, complacency among citizens to wear a mask and follow social distancing norms continues to decline. It can be recalled that when Omicron started to spread from early December, the LocalCircles survey had indicated that 1 in 3 Indians continued to refrain from wearing a mask.

In a previous survey conducted by LocalCircles, 73% of citizens surveyed were found against India restarting full schedules commercial international flights from March 27. Citizens also suggested restarting flights only from/to those countries where the test positivity rate is low. LocalCircles then escalated the findings of the survey to the government to ensure public feedback is considered as the decision to restart flights is taken.

The key question in the survey asked citizens, “Given that several new mutations of BA.2 have been found as well as Deltacron (Delta Omicron recombinant) with some of them highly transmissible and causing severe disease, what all should India be doing to manage risk?” In response, 4% said “(1) Aggressive genome sequencing”, 10% said “(2) Enforcing masking and social distancing protocols in indoor and crowded public places”, and 8% said “(3) Imposing flight restrictions from countries where this is found”. Breaking down the poll, 6% said India should be doing “1 & 2” from the aforementioned options, 10% said “2 & 3”, 7% said “1 & 3”, and 27% said all “1, 2 & 3”. There were, however, 13% who said “Do none of the above till the subvariant mutation is found in India”. 11% said “Do none of the above at all” while 4% did not have an opinion. On an aggregate basis, 72% of citizens surveyed want India to proactively take steps to mitigate risk from Omicron BA.2 mutations and Deltacron. This question in the survey received 18,599 responses. 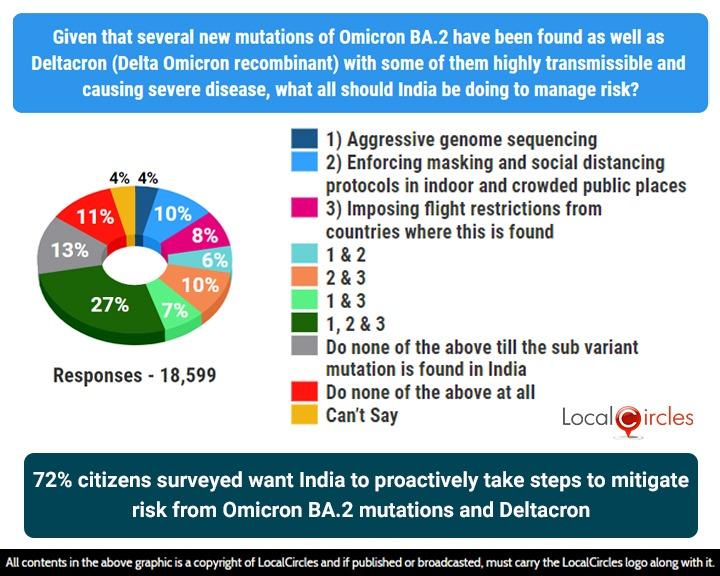 If responses given by citizens are evaluated in the order of priority on what India should be doing to contain and mitigate risk from BA.2 H78Y mutation, 53% said “Enforcing masking and social distancing protocols”, 52% said “Imposing flight restrictions from countries where this is found”, and 44% said “Aggressive genome sequencing”. 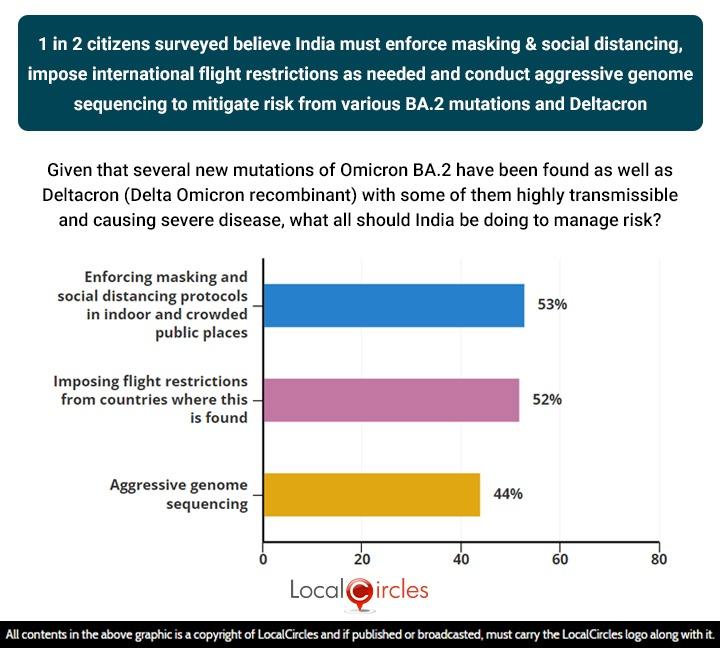 In summary, 1 in 2 citizens surveyed believes that India must enforce masking & social distancing, impose international flight restrictions as needed and conduct aggressive genome sequencing to mitigate risk from BA.2 mutations and Deltacron. It is important for the country to continue genome sequencing to understand the behaviour patterns of BA.2 mutations as well as other variants like Deltacron. Further, the Government according to people must increase surveillance in districts with cases of these new mutations and variants and study reinfection possibilities as such findings will determine the next phase of a pandemic for India and the probability of a 4th wave in the coming months.