September 21, 2021, New Delhi: Media reports are rife with cases of viral fever among both adults and children in various hospitals of Delhi. Hospitals are saying that they have been receiving at least 50-60 cases of viral infection cases every day in their OPDs, with fever touching 102-103 degrees Celsius. They maintain that the changing weather with extreme heat and excessive rainfall in the city as the cause in the spike of such cases. Similar cases continue to come from various other North and Central India states with Uttar Pradesh reporting vira fever, scrub typhus and dengue.

Since mid-August, several residents of Delhi have reported on LocalCircles that they have some one in the family with COVID like symptoms i.e. fever, runny nose, fatigue etc., with some checking with the larger community about what was prevailing. Many have also been getting RT-PCR test done only to find later post-doctor consultation that they are negative and under the influence of some kind of viral infection or vector borne seasonal flu. LocalCircles survey released on August 19th, 2021, had indicated that 41% of Delhi households with 1 or more members who are currently down with viral fever or flu-like symptoms.

To understand how the situation has changed in the last 4 weeks, LocalCircles has conducted another survey, which received 7,697 responses from residents of Delhi across 11 districts. 63% of the respondents were men while 37% were women. 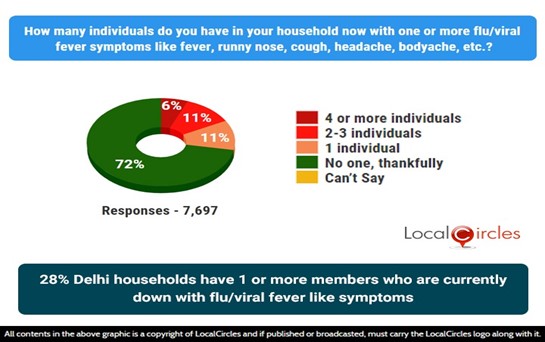 A similar survey released by LocalCircles on August 19th, 2021, had indicated that 41% of Delhi’s households have 1 or more members who are currently down with viral fever or flu-like symptoms, which has declined to 28% this week. The means that flu/viral fever situation has improved in Delhi in the last 4 weeks with 30% fewer households now impacted by it. 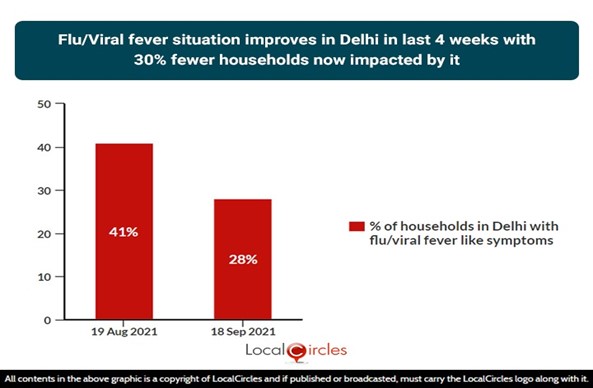 The findings indicate a decline as found out by the survey with 30% fewer households of Delhi now impacted with the flu/viral-like symptoms. However, 11% of citizens who said they have only 1 member so far and could see more members developing symptoms in the days to come. The Government on top priority must deploy resources towards containing the spread of flu and mosquito borne diseases. Enforcing mask compliance and ensuring all activities that will prevent breeding of mosquitoes including anti mosquito fogging must be done on top-most priority by the different municipal corporations of Delhi.

LocalCircles has conducted another survey, which received 7,697 responses from residents of Delhi across 11 districts. 63% of the respondents were men while 37% were women. The survey was conducted via the LocalCircles platform and all participants were validated citizens who had to be registered with LocalCircles to participate in this survey.