21st November 2019, New Delhi: Finally, the lawmakers of India have gotten to discussing the subject of air pollution this week. Delhi NCR has been reeling under the effects of pollution for the last 30 days, with toxicity in the air reaching severe plus levels multiple times. The pollution hit its peak on Nov 3rd with parts of Delhi NCR reporting AQI levels of 1500+. Last week again, parts of Delhi NCR hit AQI levels of 1000+.

Per citizens, schemes like Odd-Even in their current form have minor impact in improving the air quality and according to a LocalCircles survey done in late October 42% citizens believed that stubble burning is the root cause of deadly smog in Delhi and NCR.

To move from problem identification to solutions, LocalCircles asked citizens of Delhi NCR on what could be done to control the stubble burning in Punjab, Haryana and other neighbouring states. The survey received 8,107 votes from people living in Delhi, Gurgaon, Noida, Ghaziabad and Faridabad. A public consultation was also conducted in which people from across India participated.

Citizens were asked what solution from State and Central Government according to them will help in best addressing the issue of stubble burning in Punjab and other states. 40% said Government should ensure that the farmers have water to sow paddy in early June and harvest in early October. 10% said it should be ensured that enough seeding equipment like seeders are available free of cost. 40% said providing a stubble pickup service that pays a small incentive could be the answer while 3% said proving compensation to not sow paddy at all could be done. 3% said others and 4% were unsure.

Clarity from People: Governments in mission mode needs to pull forward paddy sowing cycle and enable a stubble pick up service as solutions to Dangerous Pollution in Delhi NCR 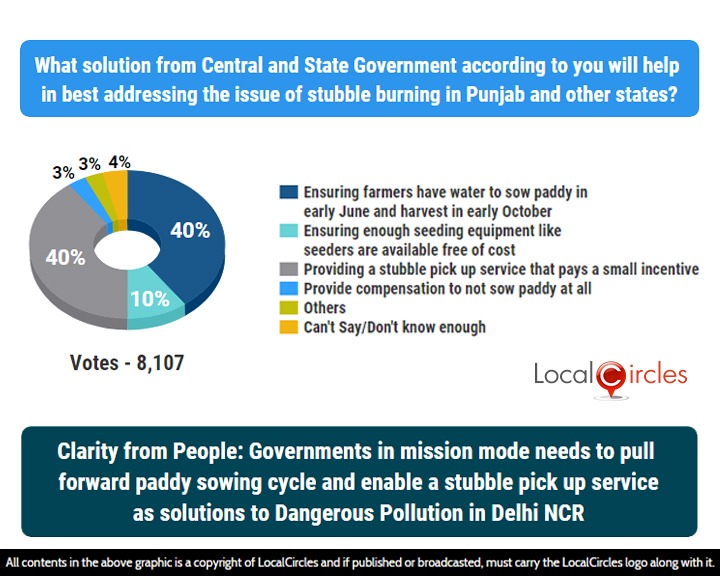 In 2009, the Punjab Government brought the Punjab Preservation of Subsoil Water Act of 2009 to impose a delay on farmers to plant paddy so enough water is available during the summer for residential consumption. This has led to delay in the paddy sowing which instead of happening in early June is now happening in late June. This delay leads to the harvest becoming ready only in late October thereby leaving very little time for farmers to clear up the stubble and sow the next crop. As a result, a large number of farmers are setting their fields on fire to clear up the stubble. While the bigger farmers have started using equipment like seeders which do not require stubble to be cleared to sow the next crop, majority of the small farmers are still relying on stubble burning to clear up the fields. Before the 2009 act was brought in, the harvesting of paddy took place in early October, allowing enough time for natural decomposition of stubble.

The only other option to get rid of the left-over stubble is enabling a stubble collection service which can collect stubble from all the farms in the short period that’s available with the farmer to get rid of the stubble. A stubble collection service was announced by NTPC in late 2017 but the project never took off and two years later, the farm fires only continue to increase.

According to citizens, the Central and State Governments must also look at re-aligining incentives, policies and enforcement. If MSPs for paddy are revised appropriately, that can drive the farmers to other crops. Similarly, according to some citizens, the free power should only be given to farmers in the form of a subsidy only if 1 non paddy crop is being sown in a year. In addition, the Central and State Government should operate in mission mode to ensure Punjab has enough water supply such that there is enough water for farmers to sow early. This may require rejuvenating the canal network in the state and other such initiatives.

LocalCircles will be submitting the findings of this public consultation to Prime Minister’s Office, Ministry of Environment and the Chief Ministers of Punjab, Haryana, Delhi and Uttar Pradesh.