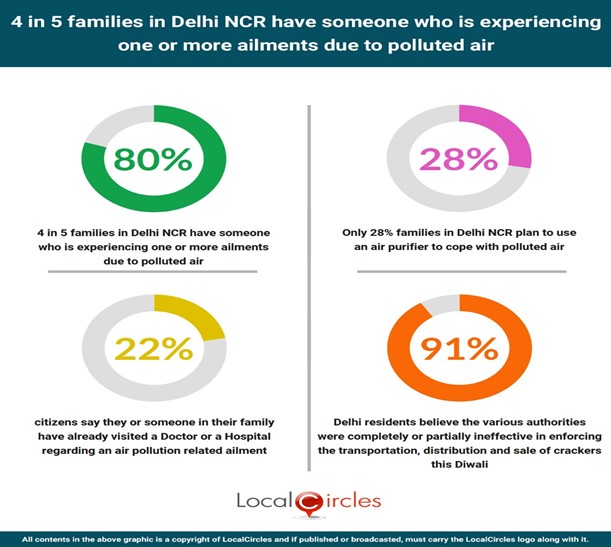 November 8, 2021, New Delhi: It is that time of the year again which the residents of Delhi-NCR dreadfully fear. As the country fights COVID, with rampant stubble burning by farmers in Punjab and Haryana, cracker bursting by residents of Delhi on Diwali and increased vehicles on road, the air in Delhi and NCR has turned deadly and toxic. On the night of Diwali and the next day morning, many areas of Delhi and NCR crossed the 1000 mark on the AQI index. Even 4 days post-Diwali, the pollution levels are still hazardous with PM 2.5 above 500 in most parts of Delhi NCR on Nov 8th. The stubble burning which contributed 36% to the pollution levels on Diwali night now contributes over 40% to the hazardous air. NASA's satellite imagery showed approximately 700 farm fires early last week in places like Amritsar, Patiala and Firozpur in Punjab and Ambala and Kaithal in Haryana which has risen further into this week.

With residents of Delhi and NCR cities of Noida, Ghaziabad, Gurugram and Faridabad all struggling to breathe, LocalCircles received thousands of posts and comments from citizens discussing polluted air, what they or their family members are experiencing, if they have sought medical help, what they are doing to cope with pollution and their views on stubble burning and cracker bursting. To get a first-hand understanding of what people are experiencing due to the toxic air quality and their coping up plan along with views on the handling of the cracker ban, LocalCircles conducted a study that received over 34,000 responses from residents of Delhi, Gurugram, Noida, Ghaziabad and Faridabad. 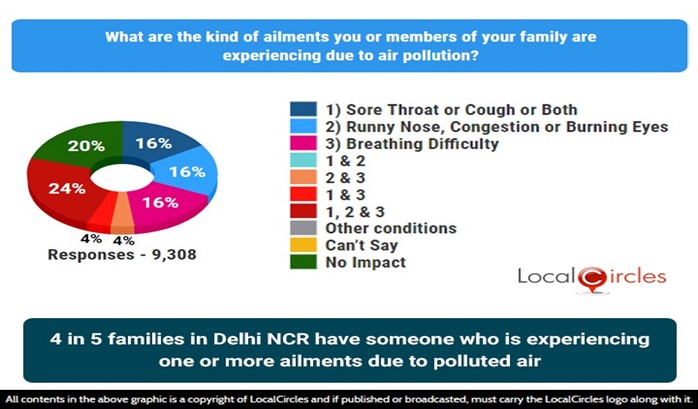 If responses given by citizens are evaluated on an aggregate basis as many are experiencing multiple conditions, 48% are experiencing “breathing difficulty”, another 44% have “sore throat or cough or both”, and there were also 44% who are down with “runny nose, congestion or burning eyes”. 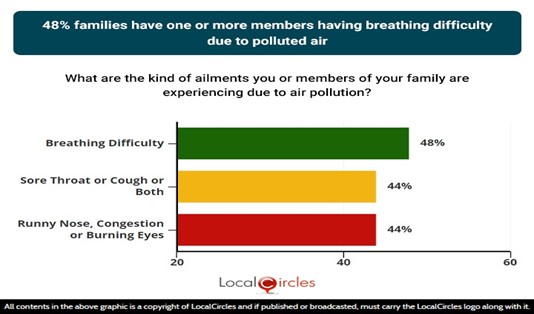 Many doctors and hospitals in the city have also started reporting a higher number of cases of patients with breathing difficulties. People with pre-existing respiratory or pulmonary conditions, when exposed to poor air quality are more likely to develop complications that could make them more vulnerable to infectious diseases like Covid-19. The following question sought citizens’ response about their or family’s plan to cope up with the deteriorating air quality. In response, 22% said they “(1) use anti-pollution mask”, and 11% said they “(2) use air purifiers at home”. Breaking down the poll, there were also 6% of citizens who plan to use both “1 & 2”, while 22% plan to “(1) use anti-pollution mask” as well as “(3) increase consumption of immunity boosting foods”. Then there were 11% who plan to use all “1, 2 & 3” from the aforementioned options. There were, however, 28% of families who do not plan to do anything. This question in the survey received 9,263 responses. 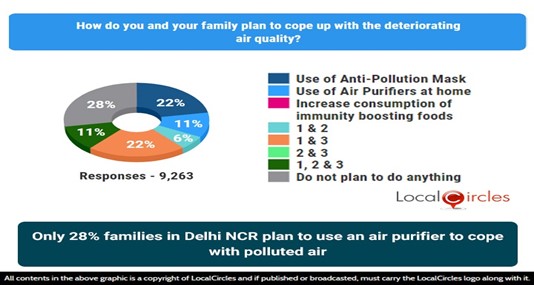 Similarly, when responses given by Delhi-NCR residents were evaluated on an aggregate basis as many are likely to do multiple things to cope with the pollution, it was found that 61% plan to “use anti-pollution mask” to cope with polluted air, 33% may “increase consumption of immunity boosting foods”, and 28% will “use air purifiers at home”. 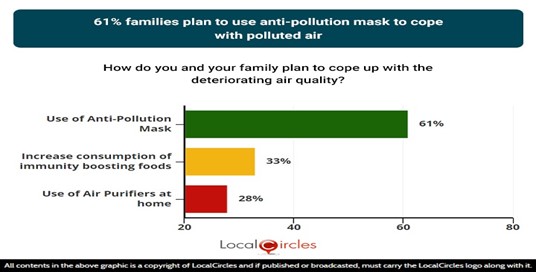 Doctors in Delhi are reporting a 20-25%% increase in number of patients coming in for congestion, burning eyes and respiratory issues. Multiple reports have suggested that the life expectancy of Delhi residents is considerably reduced due to polluted air adding that for many, lungs have turned blackish and have swollen due to the pollution. The next question in the survey asked citizens “How are you and your family dealing with the air pollution?” In response, 13% said “1 or more of us have visited a doctor already” and 9% said “1 or more of us have visited a Doctor and a Hospital already.” Breaking down the poll, 26% said “Having health ailments due to pollution but not visited doctor or hospital” and 43% said “no impact” while 9% couldn’t say. On an aggregate basis, 22% citizens say they or someone in their family have already visited a doctor or a hospital regarding an air pollution-related ailment in the last 5 days. This question received 8,277 responses. 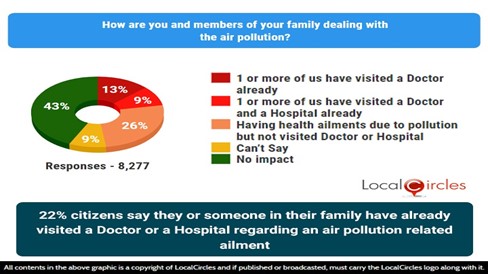 91% Delhi residents believe the various authorities were completely or partially ineffective in enforcing the transportation,distribution and sale of crackers this Diwali

Delhi’s AQI had been categorised “very poor” since November 2. While the sale, storage and use of firecrackers were banned following order on September 15, 2021, a black market emerged in various parts of the national capital. The easy availability in neighbouring states of Uttar Pradesh and Haryana also posed a challenge to the ban. With poor planning and enforcement, crackers were transported, distributed and sold in Delhi and NCR. The final question in the survey asked citizens, “How effective were the Delhi Government, Delhi Police and Municipal Corporations in stopping transportation, distribution and sale of crackers before Diwali?” In response, 55% of citizens said “completely ineffective” and 36% said “mostly ineffective.” There were only 9% citizens who said “somewhat effective.” Out of the 7,896 respondents, none opted for “quite effective.” On an aggregate basis, 91% Delhi residents believe the various authorities were completely or partially ineffective in enforcing the transportation,distribution and sale of crackers this Diwali. 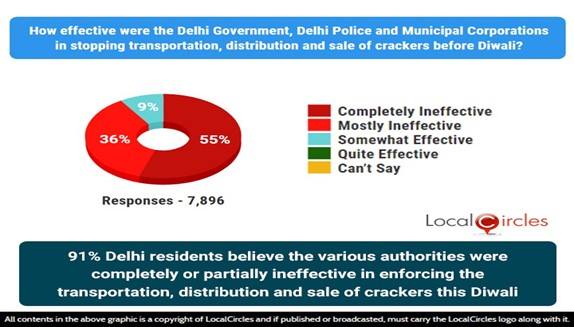 In summary, the air in Delhi and NCR is at national emergency and it has been for 6 years however both Central and State Governments of Delhi, Punjab, Haryana and Uttar Pradesh continue to fa in handling it as an emergency. While some progress has been made through point solutions like new highways to reduce vehicular traffic through Delhi and NCR or via Odd-Even programs or via cracker bans, the issue of stubble burning has not been tackled effectively. As a result, residents of Delhi NCR continue to suffer. The results of this survey show that 4 in 5 families in Delhi-NCR are now experiencing 1 or more ailments due to polluted air. Of whom, 48% of families have 1 or more members having breathing difficulty due to polluted air, while a large majority will just live with it by wearing a mask and some will increase intake of immunity foods and drinks. Delhi hospitals have reported an increase in cases of respiratory issues post-Diwali and that is confirmed by the study finding where 22% citizens say they or someone in their family have already visited a doctor or a hospital regarding an air pollution related ailment. The survey also proves how bans are so hard to implement and enforce with 91% citizens saying the authorities failed to enforce the cracker ban completely or partially.

The key going forward is to do whatever possible to ensure not one more field is put to fire in the coming days by the farmers. And following that, development and implementation of a strategy by the Central Government along with the State Governments of Delhi, Punjab, Haryana and Uttar Pradesh so that farmers have access to alternate solutions like seeding equipment, stubble pick-up service and sowing cycles and as a result water and power supply so come 2022 not a single field in India is put to fire.