June 4, 2021, New Delhi: Within 7 weeks of lockdown that began on April 18, the national capital of India has seen COVID-19 daily cases steadily come down from a high of 3,000-6,000 to just below 500-1000 this week, and the test positivity rate has also declined from 2-3% to 0.75-1% during this period. There has also been an increase in the availability of ICU beds and ventilators in both private and public hospitals with the recovery rate rising. While the number of COVID fatalities in Delhi remains high with 100-150 deaths a day, it has recorded a decline in daily active cases.

In a move to contain and mitigate the spread, the Government of Delhi in the last 1 month extended the ongoing lockdown in the city five times by 1 week. The process of unlocking started on May 30, after 54% of citizens were found in favour of unlocking via LocalCircles platform. However, the lockdown is extended till 5 am June 7.

To understand what the people of Delhi want post-June 7 in regarding the extension of lockdown, LocalCircles conducted another survey that received over 9,000 responses from residents across all 11 districts of Delhi. 67% of the respondents were men while 33% were women.

Taking cognizance of the 500-1,000 daily caseloads and 0.75-1% test positivity rate in Delhi, the survey sought residents of Delhi’s view if they support the further imposition of a lockdown/curfew in the city after June 7th. In response, 49% of citizens said “end the lockdown/curfew and just impose night/weekend curfew. 25% said “end the curfew/lockdown and remove all restrictions” while 26% said “extend it by 1 week.” The findings of the poll indicate that 74% of residents support unlocking in Delhi from June 7. This question in the survey received 9,382 responses. 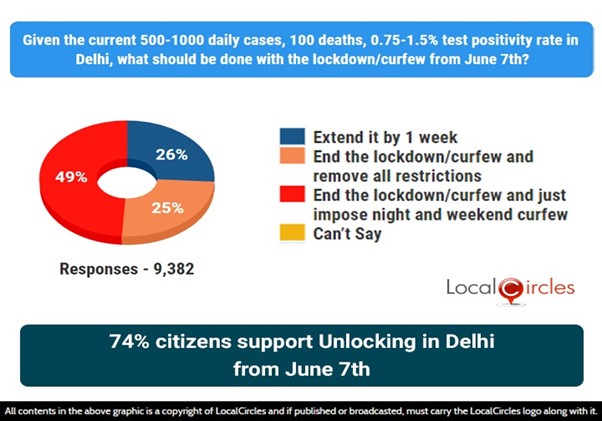 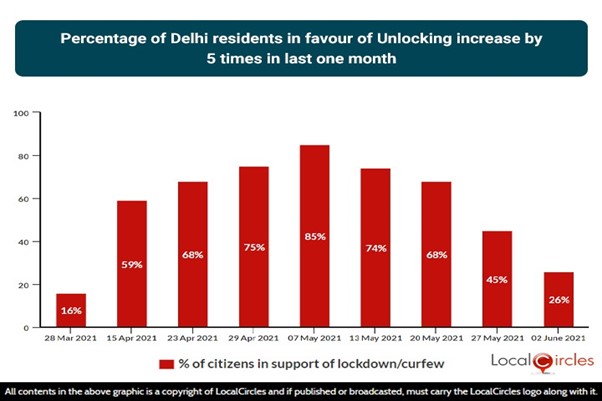 The Government of Delhi must ensure that the unlocking process is carried out in a phased manner to minimise the risk of spread COVID in the city. Citizens of Delhi have suggested that retail stores be opened only for home deliveries in the first week followed by opening with reduced schedule in the second week. If cases do not rise during this 2-week period, a full schedule opening of stores and markets may be permitted from June 21st.