In the light of rising levels of air pollution in the national capital, the Supreme Court had on October 20 turned down a plea challenging the blanket ban on burning firecrackers during Diwali and other festivities this month so as to “let people breathe clean air”. In its ruling, the SC advised people to instead “spend your money on sweets”. On Thursday, the Delhi high court had also refused to entertain a petition challenging Delhi Pollution Control Committee's (DPCC) complete ban on sale and use of all kinds of firecrackers citing the pendency of issues related to firecrackers before the Supreme Court. In both the cases, the legal recourse was sought after Delhi government banned manufacturing, storing, and selling firecrackers in the national capital and warned that any violation would be deemed a punishable offence attracting a fine of up to INR 5,000 and three years in jail.

Delhi imposed a ban on all types of firecrackers including green crackers till January 2023. The ban on sale of fire crackers is limited to Delhi though and reports from nearby NCR cities of Noida, Ghaziabad, Gurugram and Faridabad where either sale of all crackers or green crackers is permitted reveal strong demand on the sale of these items. Word of mouth reports reveal that clandestine sales are continuing even in Delhi as traders try to sell stocks in hand.

LocalCircles has been gathering pulse of the Delhi NCR residents on cracker burning for several years now and to understand what are people’s plans it conducted this year’s survey over the last one week which received participation from over 10,000 residents across all districts of Delhi, Ghaziabad, Noida, Gurugram and Faridabad. 69% respondents were men while 31% were women.

Of the 10,616 respondents to the survey, 10% indicated that “they will burn crackers and we have already got them from Delhi itself”; another 20% shared plans to burning crackers “and have already got them from NCR cities” and another 9% stated that despite the ban “will buy crackers and know how to get them”. 51% of the respondents stated they “will not be burning crackers as they cause pollution”; 10% stated they “will not be burning as there is a cracker ban in place in my city”. At an aggregate level, 39% families surveyed in Delhi NCR are likely to burn crackers this Diwali while 61% are likely to refrain from doing so. 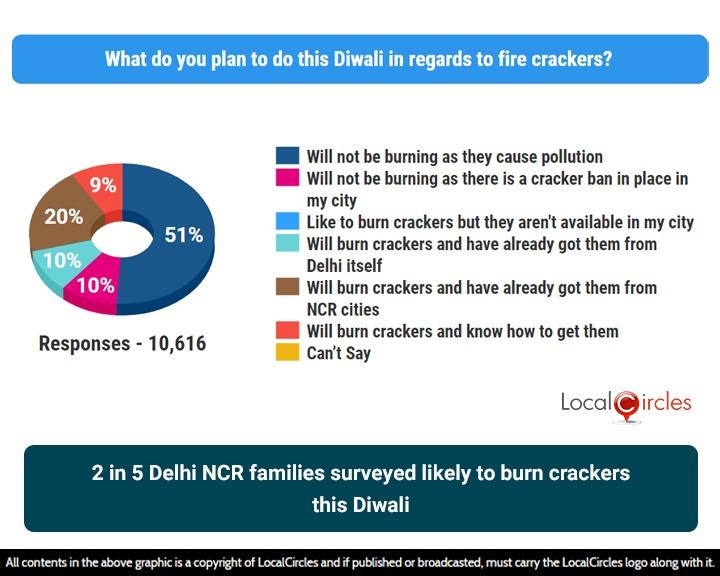 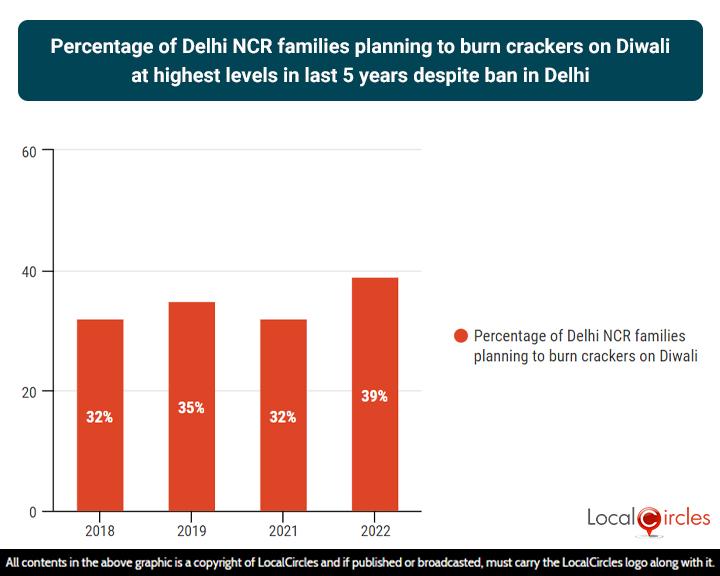 ​The survey shows that this year the number of Delhi NCR families planning to burst crackers or burn fireworks is higher compared to past years. As against 32% such families in 2018, the percentage grew in 2019 to 35% but fell post the second wave of Covid in 2021 to 32% but again as the festive spirit has risen this year and the fact that there is no ban on crackers in NCR cities of Noida, Ghaziabad, Gurugram and Noida, 39% Delhi NCR families are planning to burn crackers. There is a sizable number of people in Delhi NCR who believe that crackers is not one of the primary cause of pollution in Delhi NCR and attribute it to stubble burning and other factors.

In summary, the LocalCircles survey finds that 2 in 5 Delhi NCR families are likely to burn crackers this year. 20% of the respondents said that they already have crackers they purchased from NCR cities while 10% already have crackers they purchased from Delhi indicating that the ban is not as effective as it needs to be. 9% said that they will be getting the crackers before Diwali and know how to do so. 61% respondents said that they will not be burning any crackers either because they are convinced that they cause pollution or because they are abiding to the ban by the Government. The survey results when compared over time indicate that percentage of families burning crackers this year is likely to be the highest in the 5-year period since 2018.

The Delhi Government should have also coordinated the cracker ban with the NCR district administrations of Noida, Ghaziabad, Faridabad and Gurugram. This would have led to the ban being more effective. There is no way that police and municipal officials can enforce the ban on burning crackers just because of the magnitude and hence strong checks on ensuring no supplies are available is the only way to drive compliance.