December 14, 2022, New Delhi: The chaos at India’s showcase airport’s Terminal 3 in Delhi since past 10 days has been such that many passengers are missing their flights daily. Several hassled passengers marked their protest on social media forcing the government to step in with a promise to improve the functioning at the IGI Airport terminal 3 by pressing in more manpower. Is it the case of too little too late with one unhappy passenger stating the privatized “GMR airport is becoming worse than ISBT (Inter State Bus Terminus)”.

The long list of passenger complaints, continuing even after multiple government intervention, raises a question mark on whether the government and private sector rush to add new capacity to existing airports and plan new airports is moving in the right direction with the passengers’ interest and comfort of fliers as the main focus. Some other passengers have noted that while this chaos is going on, a new Digiyatra scheme has been launched which is based on facial surveillance and those enrolling are able to get through security without much hassle. Enrolling for Digiyatra requires passengers to share adhaar details and via face detection identify themselves.

From challenges of security clearance to pick-up at Delhi airport, passengers seem to have plenty of poor and unpleasant experiences to share on LocalCircles and social media. Majority of the complaints of passengers have been about security delays, passenger pick up, inter terminal transfer and baggage claim. One of the inputs given by some fliers has been that the poorly executed transition of non-aero security services from CISF to private agencies is a contributor to the delays.

The survey asked all respondents who experienced the Delhi airport this year, “What are some of the areas you find poorly managed at the Delhi airport?”. Of the 10,870 respondents to this query, many selected multiple options. Thus, 38% have complaints about taxi, pick up and parking; and 38% also have issues with “Inter terminal connectivity”. The next is security for entry and main security check with 31% feeling it is a major area of concern. This number saw its deterioration in the last 3 weeks as complaints for long security delays at Terminal 3 came to the fore. Just a year back in 2021, the number stood at 15%. 27% respondents in the survey also identified slow baggage claim as an area where they faced issues. Example of inefficient baggage operations at both Terminal 1 & 2 was cited by many fliers. 16% in the survey indicated an issue with check-in services; 16% with toilets and other facilities; 9% with immigration process; 7% with food, shopping, entertainment and lounges; while 13% have other problem areas outside of the options in the survey. 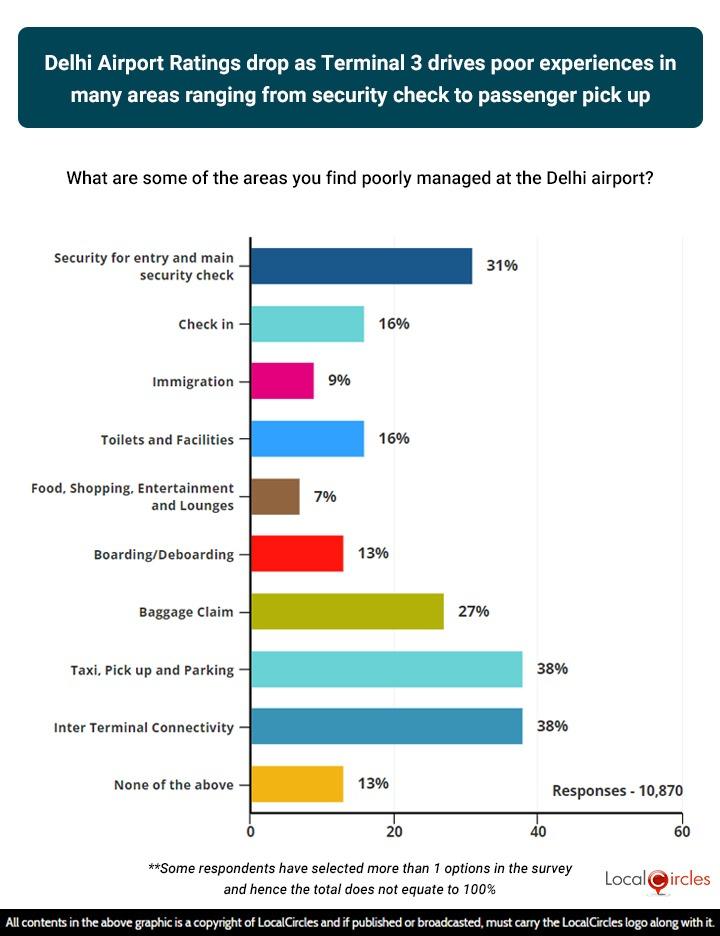 In summary, the survey finds that highest number of fliers in 2022 have found areas of taxi, pick up & parking, inter-terminal connectivity and entrance security and main security check to be the top issues with the Delhi airport. The security issues rating which was at 15% 12 months ago has jumped to 31% now indicating that passengers are having a difficult time. Ground reports indicate many passengers reaching the airport Terminal 3 three hours in advance and yet missing their flight. This is not an acceptable situation and the Ministry of Civil Aviation must quickly reengineer and optimize processes such that those reaching before the 2 hour window for domestic flights and 3 hour window for international flights do not miss their flights. With daily traffic now surpassing the 2019 peak, there is no time to be wasted in inefficient transitions, that too at a time when the next four weeks are likely to hit a new peak in passenger traffic in the history of the Delhi airport.