Can we make Public Places safer for Women in India? 29% faced molestation or sexual advances at public places; Over 75% of the victims did not even file a police complaint

No Public Places for Women: 29% Indian women have faced molestation or sexual advances at public places; 3/4ths of those harassed did not file a complaint/FIR 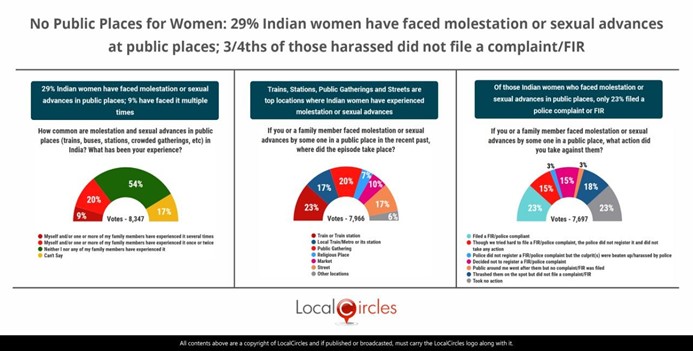 March 8, 2021, New Delhi: Today is International Women’s Day, a day when many Government Offices, as well as organisations, in India celebrate womanhood. However, while most of these celebrations are feel good, and have been going on for at least two decades, the state of affairs for women on the ground hasn’t seen much change. Be it during the day and worst at night, in public or workplace and even at home, and whether she is young or an adult on her own or with someone—there is rarely a safe place for women in India. Often, if not always, women have themselves been in a watch out against any form of sexual abuse or harassment—from derogatory remarks, patting, stroking, grabbing, pinching, poking, cyber sexual abuse, eve-teasing, verbal abuse to molestation or even rape to murder. In fact, Thomson Reuters Foundation in 2018 ranked India as the most dangerous country for women. Even the NCRB report in 2019 suggested that out of 4 lakhs reported cases of crimes committed against women, 32,033 were cases related to rape. Nothing much has changed as most of such crimes go unreported in the country due to fear of retaliatory action by perpetrators and their threats.

Sexual violence against women is a serious criminal offense in India. In fact, the report titled “Fifth Edition of Death Penalty in India”, 77 death sentences, involving 76 prisoners, were imposed by trial courts in India. Of which, 50 sentences were related to cases involving sexual violence against women, and 48% of those cases were related to a child below the age of 12. Some of these death sentences passed by the Indian court made world headlines— just a few days before the country went into nationwide lockdown, 4 men convicted for their role in the Nirbhaya Delhi gang rape and murder case were hung in Delhi’s Tihar jail.

To mark the occasion of International Women’s Day, 2021 with something constructive, something that will make India better for women, LocalCircles sought feedback from citizens. Basis the feedback, LocalCircles decided to conduct a survey to understand how vulnerable women are to becoming victims of sexual advances and molestation in public places in India, what are the most common locations for it, and how effective is the complaint registration system and interfacing with police. It also sought to understand what actions the victims took to book the perpetrators. The survey received more than 24,000 responses from over 14,000 unique citizens located in 319 districts of India.

29% Indian women have faced molestation or sexual advances in public places; 9% have faced it multiple times; 17% respondents couldn’t say if the women in their homes experienced it

Sexual violence against women in public places is a criminal offense, with serious provisions under the Prevention of Sexual Harassment Act and a criminal offense under the Indian Penal Code and Information Technology Act. This includes physical contact and advances involving unwelcome and explicit sexual overtures; a demand or request for sexual favours; showing pornography against the will of a woman; making sexually coloured remarks. However, the Government and the authorities’ limited efforts to enforce the law and curb gaps in mechanisms often leave women vulnerable in public places. The following question tried to understand how common have sexual offences become in public places in the country.

29% Indian women have faced molestation or sexual advances in public places; 9% have faced it multiple times 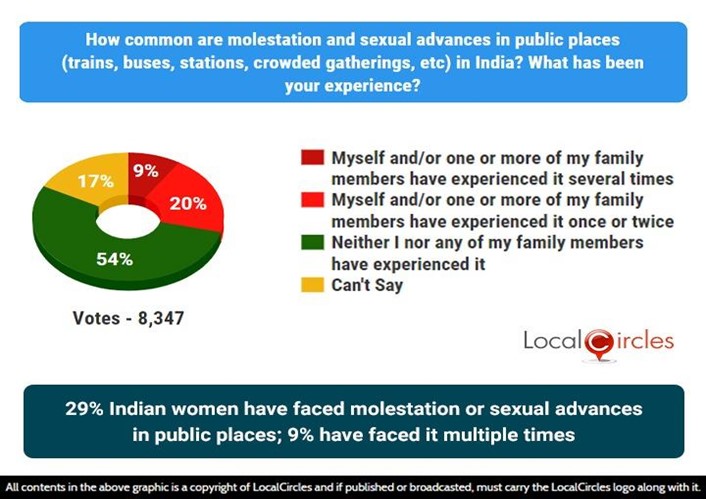 The next question in the poll sought to understand the most common public places where Indian women experience high incidences of molestation or sexual advancement. The survey asked: “If you or a family member faced molestation or sexual advances by someone in a public place in the recent past, where did the episode take place?” 23% said “train or train station”, 17% said “local train or metro or its station”, 20% said “public gathering”, 7% said “religious place”, 10% said “market”, 17% said “street”, and 6% said “other location”. Findings from the poll that received 7,966 responses indicated that trains, stations, public gatherings and streets are top locations where the majority of Indian women have experienced molestation or sexual advances. A high 23% of the respondents voting train or train station can be easily identified with as till 2016 if someone was faced with such a situation in a running train, there were literally no options but to rely on fellow passengers who may or may not be there or unwilling to take on groups of offenders. It was only in 2016 that the Railway Emergency Helpline became functional. 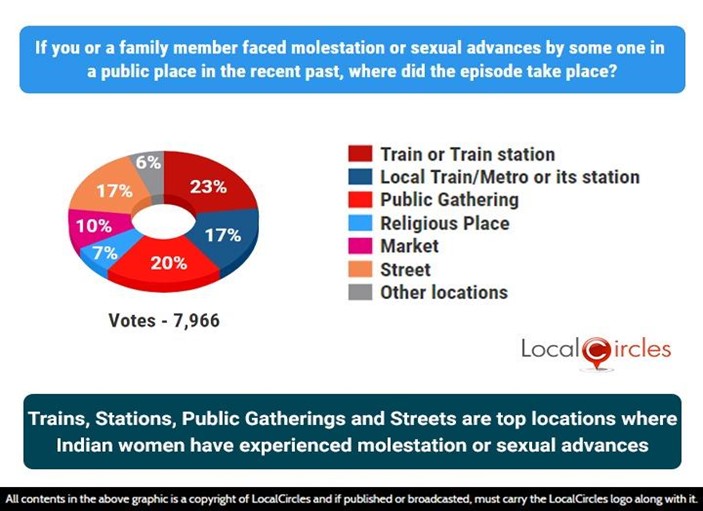 Of those Indian women who faced molestation or sexual advances in public places, only 23% filed a police complaint or First Information Report (FIR)

A 2018 survey revealed by Indian National Bar Association indicated that 68% of victims of sexual harassment don't report fearing consequences. In workplace, for instance, Indian law states that every organisation with 10 or more employees needs to set up an Internal Complaints Committee to look after the cases of sexual harassment, which should be presided over by a senior female employee and most members comprising women, and an external member familiar with the law. However, most victims turn away fearing retaliatory action by perpetrators. So much so that, even police, in most sexual harassment cases, turn the victim away when she goes to report the incident and seek help from them. An FIR is a very important document because it sets the criminal justice machinery upon motion. 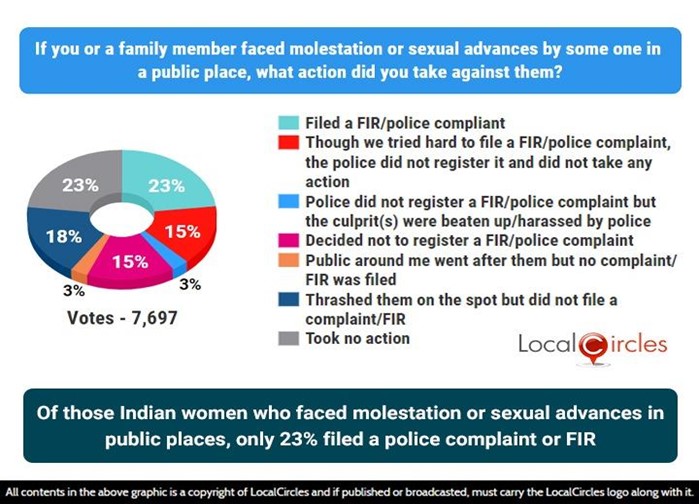 The more women and their families tolerate, the more it happens. Sexual advances and men trying to molest is not a trivial issue; however, it is often a “just ignore” attitude of the victim and more so their families due to various reasons including dealing with courts and the social harassment, that perpetrators continue to do what they have been doing. Even the Delhi court recently ruled that "a woman cannot be punished for raising her voice against sexual abuse". The court was making the ruling in an alleged sexual harassment case filed by a women journalist against the erstwhile Indian minister who had reacted with a defamation case against the former. The landmark judgement, while it has boosted the #MeToo movement of India, also hopes to see many Indian women facing molestation or sexual advances to come forward—as the final result of the poll has indicated that of those Indian women who faced molestation or sexual advances in public places, only 23% filed an FIR or a police complaint. Undoubtedly, public places—especially train stations, public gatherings and streets—have become a breeding ground for perpetrators where Indian women have experienced molestation or sexual advances as indicated by the survey.

Blame it on the absence of fast-track court, inadequate investigation, lack of effective vigilance, police inability—or, even the patriarchal mindset of most Indian families that women are not safe in public places in India. The way forward, as suggested by citizens in the LocalCircles platform are mutual consent on sex should be introduced early in school curriculum so that children are better educated about its importance vis-à-vis gender equality. An effective monitoring system, such as CCTVs in public places like train stations and bus stands so that the perpetrators fear the law and order before they even think of committing such heinous crimes. Last but not least, there is an urgent need to sensitise police forces at the ground level effectively. Citizens have also brought out to light that most police stations still do not have women staff, and there is a need to ensure that every district has atleast one police station where there is a woman police constable or officer available for 24X7 so that it becomes easier to file a complaint. In addition, people also suggested that crime against women in public places must be part of every state DGPs KRA and they must be held responsible. Only if there is accountability, there will be improvement.