International Women’s Day: 87% citizens believe crimes against women have not reduced in India in last 4 years

8th March 2018, New Delhi : Report of cases of crime committed against women have continuously been on the rise. The Nirbhaya case was an eye opener for the entire country and caused widespread criticism and protests. But the situation does not seem to be getting any better. Papers everyday are full of news of rapes, trafficking, acid attacks and other atrocities committed against women. The insecurities women have to face in public spaces as well as online have also considerably increased.

On the occasion International Women’s Day, LocalCircles conducted a survey to ascertain what Indians think about the current state of women safety in the country. The 3-poll survey received more than 24,000 votes with participation from over 11,000 unique respondents .

The first poll asked how crime against women in India has changed after the Nirbhaya incident in December 2013. 37% respondents said it has increased, 50% said it is same as before, 6% said it had decreased and 7% said they were unsure about it. 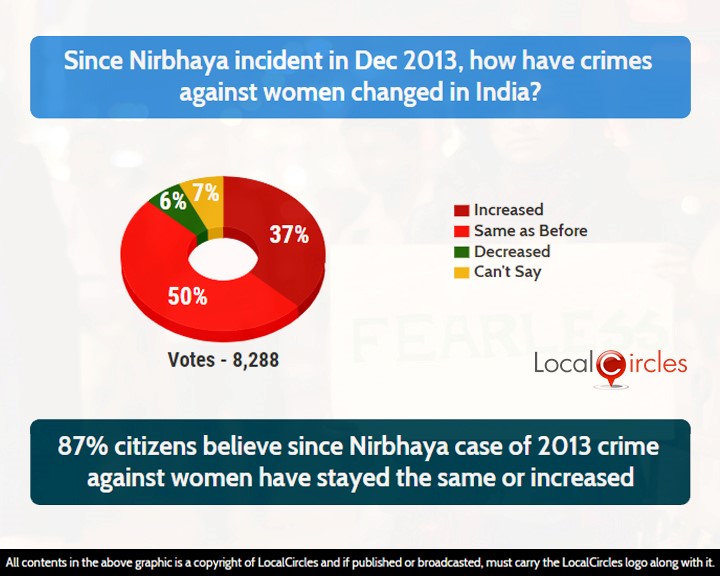 These numbers are startling, keeping in mind the big promises and announcements made after the Nirbhaya rape case to pacify people. The women’s helpline created by the police has been receiving an increasing number of complaints everyday about molestation, sexual advances, household violence and much more.

As many as 39 crimes against women were reported in India every hour, up from 21 in 2007, according to Crime in India 2016 report by National Crime Records Bureau.

In the second poll, 75% citizens said that their state government has not taken any impactful initiative in last 4 years to reduce crime against women. Only 16% said some steps were taken. 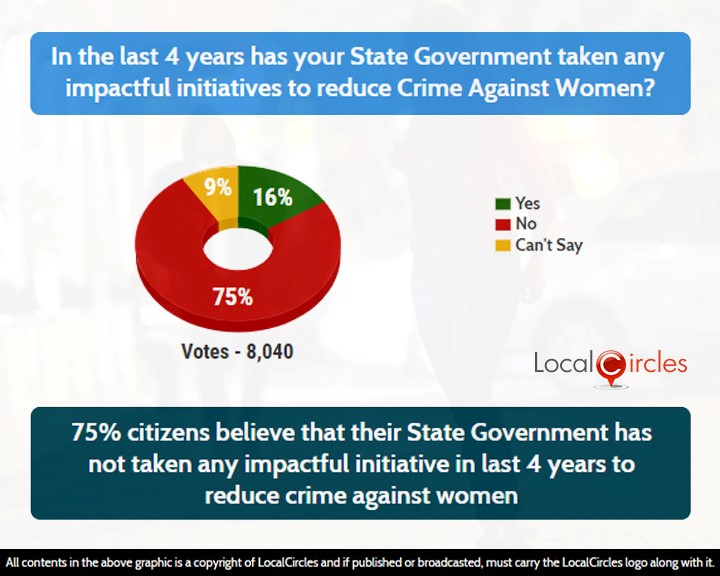 “Cruelty by husband or his relatives” was the most reported crime against women, accounting for 33% of all crimes in 2016, with 4 cases of rape reported every hour.

Police has often been in news for negative reasons. Refusing to file an FIR for small and big crimes committed against women, taking bribes from the accused to loosen the string around them etc. are some incidents that are regularly heard.

India has a dedicated Ministry for Women and Child Development. The last question asked citizens what impact it has had so far in reducing crime against women. 7% said it has had significant impact, 31% said some impact and 54% said it has had no impact at all. 8% were not sure about it. 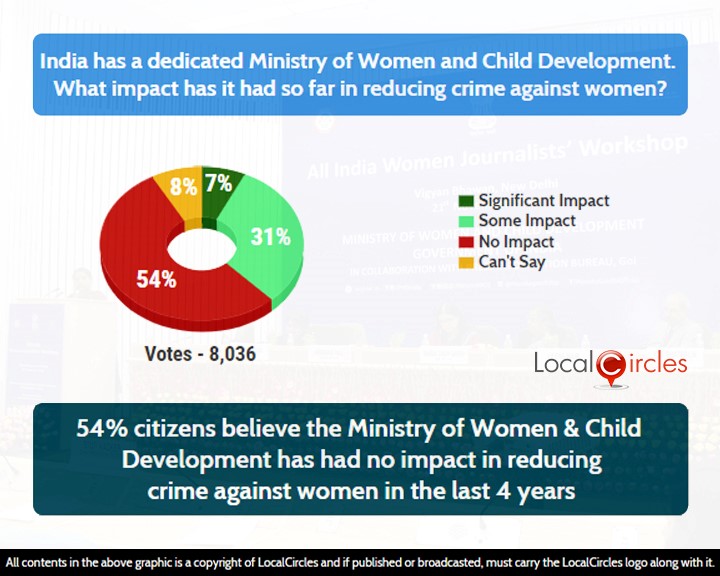 2016 saw the lowest conviction rate of 18.9% in cases in which trials were completed by the courts for crimes against women in a decade. All these issues combined are acting as a major roadblock in the empowerment of women in India, who constitute around 50 percent of India's population.

Our judicial system has been lax and requires a major improvement in delivery of justice to women against whom crimes of any sort are committed, including special benches and fast-tracked hearing of cases.