June 11, 2021, New Delhi: After experiencing an extremely strong second wave between April 1 and May 15th and a 45-day lockdown in most states of the country, India is now in the unlocking process. With daily case loads rising from 15,000 in early March to a high of 410,000 in early May, the daily case load has thankfully receded to the 100,000.

Most experts seem to agree on two things: 1) a third wave is likely a few months away and India needs to vaccinate as fast as it can. 2)A successful vaccination program requires that enough quantities of vaccine doses are available and there are enough staffed locations to administer them, the process to take an appointment is easy and the population is willing to take the vaccine. Since April 12th, citizens via LocalCircles have been escalating the issue of vaccine shortage when 18% citizens reported that someone in their social network could not find a vaccine dose when they went to get one. The number rose from 18% to 51% by the end of April in the middle of the peak of second wave of COVID in India. Many people reported difficulties in getting an appointment through the COWIN web site over the last 30 days as vaccine hesitancy continued to decline with rising cases.

With continued complaints about vaccine shortages, issues with COWIN site, LocalCircles conducted another survey to understand the state of affairs on the ground. The survey received close to 26,000 responses from citizens located in 299 districts of India. 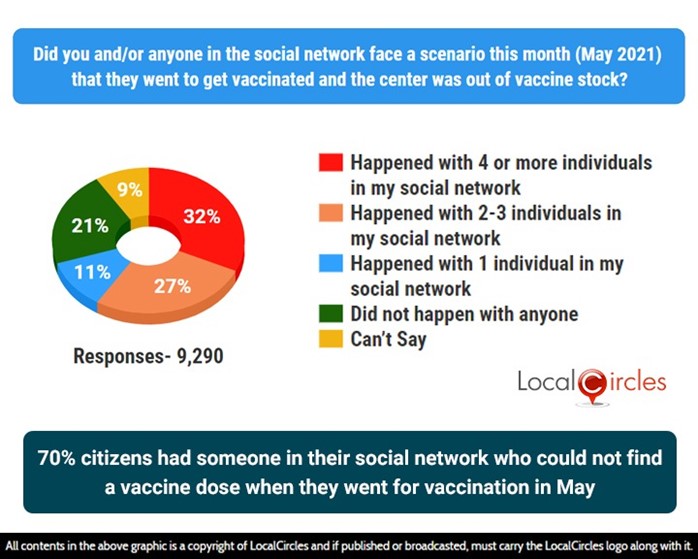 Only 18% of citizens in the LocalCircles’ survey conducted on April 11th, 2021 were unable to find a vaccine dose at the vaccine center. As more people starting to take the jab with the COVID-19 cases continue to touch new highs across the country, logistics, supply, and shortage of vaccines issues shot-up at vaccination centers. On April 26th, the percentage of citizens reporting shortage at vaccination centers surged by 3 times to 51%. On May 31st, the percentage of citizens reporting shortage of vaccine further increased 4-fold to 70%. 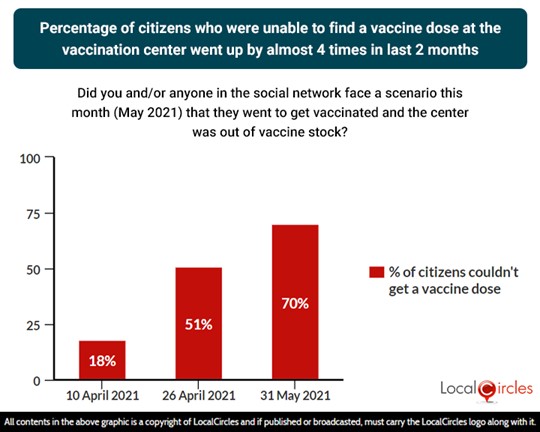 For instance, the Delhi government halted vaccine for the 18-45 age group on May 22 as vaccines had run out. Residents of Delhi reported difficulty in getting an appointment for 2nd dose of COVAXIN (due 4 weeks after the 1st dose) and having to drive to Meerut to get one. After multiple states reported shortage, the Supreme Court directed the Central Government to take action and improve the vaccine situation in India.

Also, citizens reported the issue of being overcharged for vaccine doses by private hospitals on the LocalCircles platform. A detailed survey was conducted which found that 23% citizens paid more than INR 1000 for a single dose of vaccine, and 3% paid more than INR 2000. It also found that some private hospitals are charging high service charge and even a registration fee and 73% citizens wanted private hospital service charges to be capped by the State Government at INR 100 - 200 (at hospital) and at INR 200-400 (offsite at societies, colonies/offices/clubs). 79% citizens want their state government to prohibit private hospitals from levying a registration fee for COVID vaccine. LocalCircles then escalated the issue to the Union Health Ministry.

On June 7th, Prime Minister Narendra Modi in a televised address announced a free vaccination drive for all Indians above the age 18 earlier this week. His administration will now procure the shots from the manufacturers and send them to the states for distribution and administration. A 25% quota is made available for private hospitals however with the price caps applied on service charge. The service charge that private hospitals can now levy is INR 150 and a GST of 5% on the base price. The Government also announced that the maximum chargeable amount now for Covishield is INR 780, INR 1,410 for Covaxin and INR 1,145 for Sputnik V.

With the Prime Minister’s announcement, the Government placed an order of 400 million doses, out of which 250 million is with Serum Institute of India for Covishield doses while 190 million are from with Bharat Biotech for Covaxin. This is in addition to the advance order of 300 million doses placed with Hyderabad-based Biological E. It is also considering providing legal indemnity to American pharmaceutical companies, Pfizer and Moderna to roll out their vaccines in India. Pfizer has indicated that it could make vaccine doses available in India as early as next month. 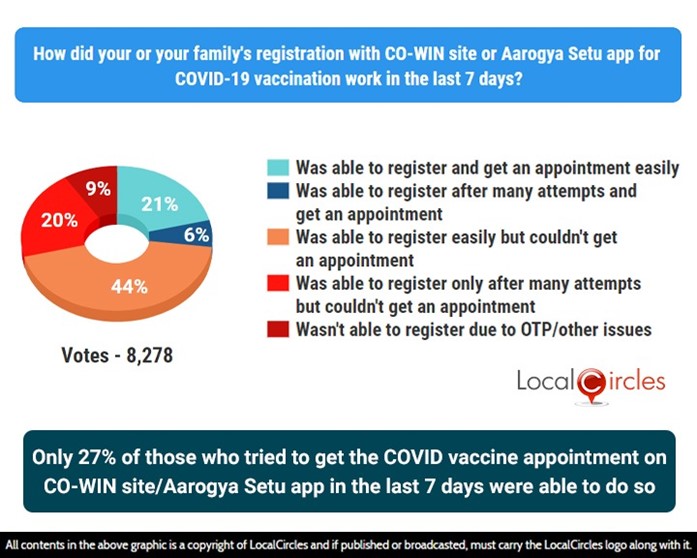 The Supreme Court also taking note of the citizens plight said that it may not be feasible to require the majority of our population to rely on friends/NDOS for digital registrations over COWIN when even the digitally literate are finding it hard to procure vaccination slots. Thereafter the Government permitted walk-ins for 18+ at Government vaccination centers. Many private hospitals are now also facilitating the registration process for walk-ins.

With what India experienced between April 1 – May 15th with the new variant B.1.617.2 propagating in most parts of India, rampant shortage of all things COVID and over 100,000 deaths in a short period, the vaccine hesitancy drastically declined from March to May.

As part of the similar exercise, LocalCircles asked citizens “With 20 crore doses already administered, what is your current plan of taking the vaccine?” In response, the majority of 53% said “have taken one dose and will take the second dose”. There were also 2% of citizens who said, “have taken one dose and may not take the second dose”. Breaking down the poll, 29% said “will be taking the vaccine dose very soon”, 11% said “not convinced about whether the currently available vaccines will provide protection from new strains”, and 5% said “do not plan to take the vaccine at all”. The findings of the poll indicate that the vaccine hesitancy has now dropped to 18%. This question in the survey received 9,006 responses. 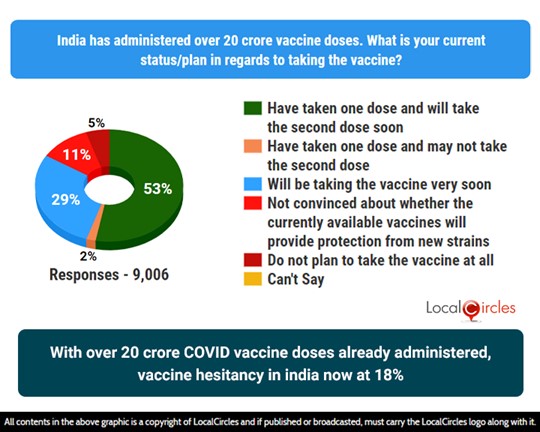 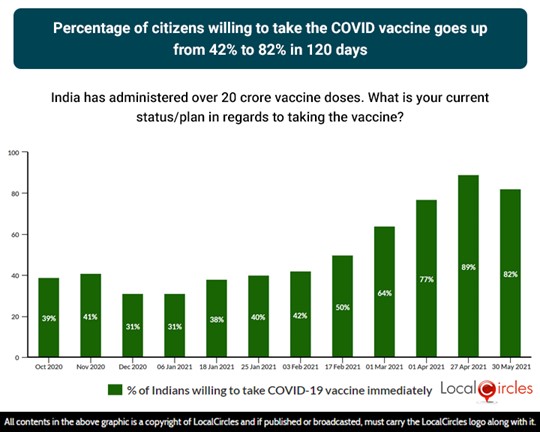 The LocalCircles vaccine hesitancy survey at the beginning of the vaccination drive on Jan 18th indicated a vaccine hesitancy of 62%. The number dropped to 58% be February 3rd and at the end of May to 18% indicating declining vaccine hesitancy as people realized the lethal nature of the COVID 2nd wave with everyone knowing someone who had experience COVID and a sizable percentage having a COVID related death in their network.

It must be noted that the vaccine hesitancy had declined to 11% in late April near the peak of the second wave and since than has risen to 18%. 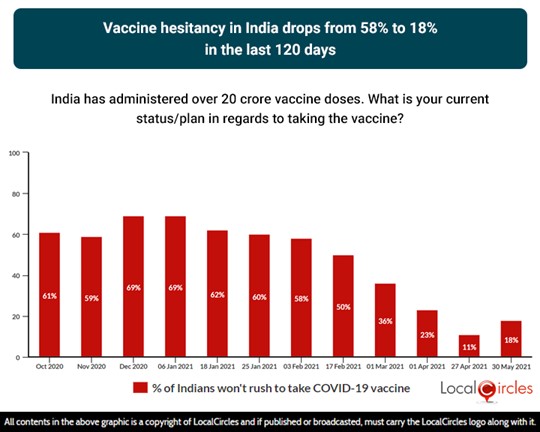 In summary, with vaccine hesitancy at a low of 18% many more are now seeking the vaccine as compared to in early March when the vaccination drive began. This coupled with supply, procurement and distribution issues has led to shortage with 70% of citizens surveyed having someone in their social network who could not find a vaccine dose when they went for vaccination in May. The availability of vaccines is likely to rise in the coming months with India placing an order for 400 million vaccine doses in addition to 30 million booked doses 300 million doses placed with Biological E. This combined with the walk-ins being permitted for the jab, skipping the COWIN site interface is likely to make vaccination accessible to many more.

India’s objective at this stage should be to just get as many vaccine doses in the country and maximizing their administration. In parallel there is the need to ensure there are trials for children being conducted by all vaccine makers such that vaccines for children become available at the soonest. This is the only way India will be able to minimize the impact of a 3rd wave of COVID when it does arrive.