June 11, 2020, New Delhi: A few days back, the Chief Minister of Delhi, Arvind Kejriwal announced that hospitals run by the Delhi Government and private hospitals will be reserved only for residents of the national capital. This decision came under sharp criticism from the residents of the NCR cities who come to Delhi very often due to its better healthcare facilities.

LocalCircles conducted a survey to get citizen pulse on this decision and received around 17,000 responses on the 2-poll survey from people living in Delhi, Noida, Ghaziabad, Faridabad and Gurgaon.

In the first question, Delhi residents were asked how they feel about Delhi Government cutting access of NCR (Noida, Ghaziabad, Gurgaon, Faridabad) residents from Private Hospitals in Delhi and Government Hospitals under its management. Only 30% respondents said they support this move while a large 62% said that they are against this move. 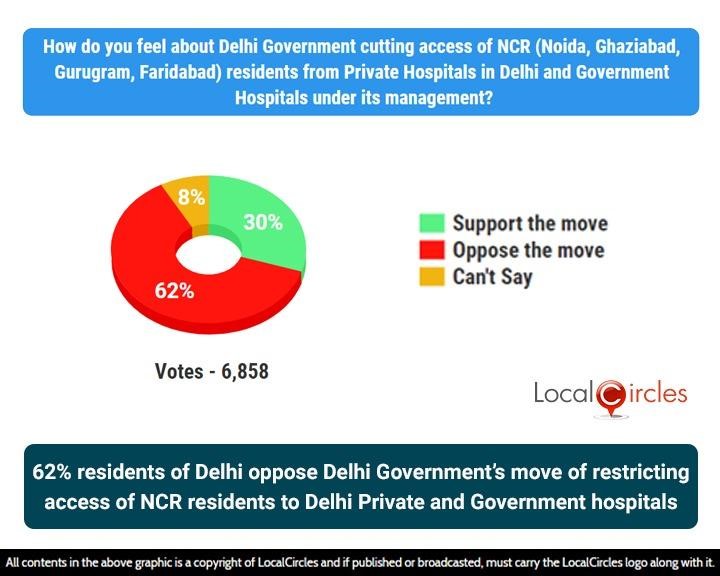 The Delhi Government said that they had sought suggestions from the residents of Delhi on how the COVID situation should be handled in Delhi and 90% people said that the hospitals in Delhi should be reserved for Delhiites only, till the current crisis is over, but according to the LocalCircles survey 62% Delhiites are against any such move. However late Monday, Lt. Governor of Delhi, Anil Baijal overruled this decision and directed authorities to ensure that medical treatment is not denied to any patient on the grounds of state of residence. People have come out explicitly on LocalCircles expressing their support for stopping such a decision from getting implemented.

People living in satellite cities of Noida, Ghaziabad, Gurgaon and Faridabad, were also asked the same question and 87% said that this move does not make sense and they oppose it. 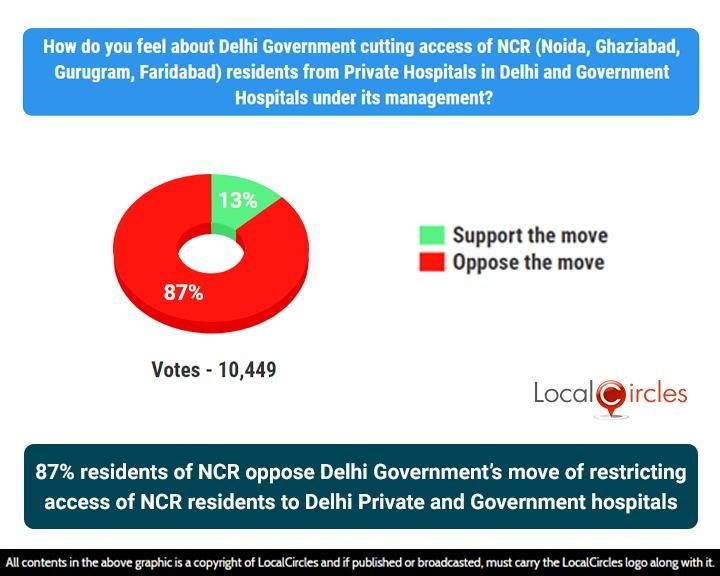 The decision could have also created a lot of problems for thousands of people who have been living in Delhi to work or study but do not have a local identification. Many NCR residents also outlined on LocalCircles, how they were originally a Delhi resident and over time moved to NCR as they bought their own home or wanted to be closer to work. Many admitted to still paying taxes in Delhi or having their business registered in Delhi.

The findings of the survey clearly show that high majority of people living both in Delhi, as well as the NCR cities are against any such move, where the hospital beds in Delhi are only earmarked for the ones whose Aadhaar card shows an address of Delhi. Everyday thousands of Delhiites cross the borders to go to work in these 4 cities and consider them an extension of Delhi. They feel that the allotment of beds in Delhi hospitals should be need based and not domicile based.

17,000+ responses were received from Delhi, Noida, Ghaziabad, Gurgaon and Faridabad. 69% respondents were men while 31% respondents were women. They survey was conducted via LocalCircles platform and all participants are validated citizens who had to be registered with LocalCircles to participate in this survey. The survey was designed such that people from all districts of Delhi and NCR participated and people from varied income groups and ages participated.