74% Indians want Government to suspend flights from countries where presence of C.1.2 SARS-COV2 variant has been reported

September 3, 2021, New Delhi: A new SARS-COV2 variant, C.1.2., which was first detected in South Africa in May 2021, is causing public health experts worldwide to be on the lookout for its presence as it seems to be more infectious and transmissible, and is even thought to avoid protection offered by COVID-19 vaccines. Scientists call the C.1.2 a "potential variant of interest," which reportedly increased from 0.2% in May to 1.6% in June, and rose again in July to 2.0% in South Africa. The variant has also been found in Congo, Mauritius, China, England, New Zealand, Portugal, Israel and Switzerland. Scientists believe C.1.2 to be the most mutated SARS-COV2 variant that has been detected so far since the virus was first discovered in Wuhan, China, last year. Though the new Covid variant C.1.2 has not been found in India so far, Kerala has already announced to screen visitors from nations with C.1.2 COVID variant cases. Mumbai's civic body Brihanmumbai Municipal Corporation (BMC) has also made RT-PCR test mandatory for international passengers arriving, especially from countries where C.1.2 has been detected. The Ministry of Health & Family Welfare has announced that it has had made RT-PCR test report conducted within 48 hours of boarding, mandatory for passengers from these countries and another RT-PCR when they land in India following a similar protocol that was announced in February 2021 after B.1.1.7 variant was reported in the United Kingdom and several other countries. This is applicable to Vande Bharat flights only as the ban on international commercial flights stands extended till September 30th.

LocalCircles has been very active on all aspects of COVID and ensured that the collective opinion of citizens reaches the Government on them. In late December 2020, based on public feedback, LocalCircles had escalated to the Government the risk of mutant Coronavirus urging that all flights from the UK and other high-risk countries be shut till the end of January amid concerns over the highly infectious B.1.1.7 SARS-COV2 variant. In the survey, 64% of citizens wanted bubble international flights shut with countries, particularly the UK, having cases of the new strain. However, after keeping the flights shut for 2 weeks, the Government of India decided to resume them from January 8th, 2021.

74% Indian want Government of India to suspend flights from countries where the existence of C.1.2 SARS-COV2 variant has been reported

The question in the survey asked citizens if the Government of India should ban flights from all countries that have currently reported C.1.2 variant given that it has higher transmissibility and is evading vaccines. In response, the majority of 74% of citizens surveyed said “yes, better to be safe than sorry”, and 19% said “no, it’s too early to ban flights”, while 7% did not have an opinion. This question is the survey received 21,466 responses.

In the community discussions, people highlighted how the approach currently defined by the Government of India to contain the spread of C.1.2 by making RT-PCR report mandatory within 48 hours before boarding and an actual test upon arrival has gaps. People highlighted how someone could catch an infection in the last 24 hours before boarding a flight, still test negative upon arrival and be traveling in India potentially infecting others. It can be mentioned here that B.1.1.7 spread in India mostly from January till March when flights were ongoing between London and India. In the genome sequencing done by Punjab in mid-March, 82% of the cases in the state were reported to be of the B.1.1.7 variant, which first originated in the United Kingdom. 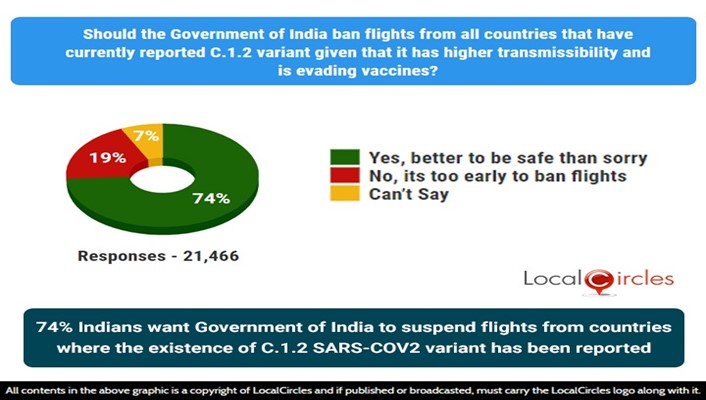 Per reports, another variant, B.1.621, has been detected in the UK. In Israel too, a sub-lineage of the Delta variant, AY.12, has been found. Though the World Health Organisation (WHO) has maintained that the C.1.2 strain is not rising rapidly, the Delta variant continues to be of their main concern. Scientists continue to advise people to continue wearing masks, follow social distancing and adhere to all COVID-19 guidelines to minimise the impact of SARS-COV2 variants. The following question in the survey sought citizens’ pulse on what India’s approach to COVID management for the rest of 2021 should be given the information available so far about Delta and new variants, effectiveness of vaccines, daily caseloads and unlocking of 2nd wave restrictions. In response, the majority of 53% of citizens said India should be “extremely cautious”, and 13% said “somewhat cautious”. Breaking down the poll, 29% of citizens said that India should “open activities but keep an eye on data”, and another 5% said “open all activities aggressively as COVID is unlikely to come back in 2021”. On an aggregate basis, the findings indicate that 66% of citizens want the Government of India to be cautious for the rest of 2021 given the risk of COVID variants and the 3rd wave. This question in the survey received 11,502 responses. 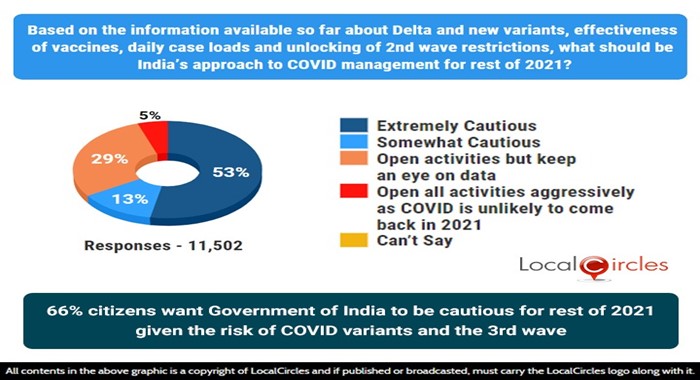 In summary, 66% of citizens want the Government of India to be cautious for the rest of 2021 given the risk of COVID variants and the 3rd wave. Given the highly transmissible nature of the C.1.2 variant, the survey findings indicate that 74% of citizens are in favour of suspending Vande Bharat arrivals of passengers from countries where the C.1.2 variant has been found. There is a need to constantly monitor and make sure none of the variants of concern are spreading in the population. It can be mentioned here that the deadly 2nd wave of COVID-19 in India that reached its peak in April and May, per experts, say was particularly led by the mutating SARS-COV2 variants. With early warning from experts saying that the 3rd wave of COVID-19 could hit India in October-November, India should take all the measures to minimise its impact, and the C.1.2 variant could only worsen the situation. Many people also feel that our strong economic recovery of the last 4 months will be in jeopardy If another wave were to impact India.

LocalCircles will be sharing the findings with the Ministry of Health in India so that citizens’ feedback can be taken into account as decisions regarding Vande Bharat flights are taken.