April 27, 2021, New Delhi: The COVID-19 vaccines largely help our bodies to develop immunity to resist the virus that causes COVID-19. India has already inoculated more than 15 crore doses with either Covishield or Covaxin doses since it started its ambitious vaccination drive on January 16th, 2021. Amid the 2nd wave of COVID-19 in India that has spiraled like a wildfire now infecting over 355,000 people on a daily basis, reports are rife that many citizens aren’t able to get the jab on a given date due to vaccine shortages at inoculation centers. Ahead of the 3rd phase of immunization starting May 1, that includes citizen of all ages above 18 years old to get the jab, leaders have started to claim about vaccine shortage in their respective states. States like Rajasthan have claimed that they are likely to face vaccine shortage, citing insufficiency in delivery of vaccine by the manufacturer as demanded by the Government. Citizens from many states of India are now sharing their feedback on LocalCircles, citing that they their family or friends found that the hospital they went to for their COVID vaccine dose was stocked out.

LocalCircles’ survey released on April 11 had indicated that 18% of citizens or someone in their social network could not find a vaccine dose when they went for vaccination in the first 10 days of April. As COVID-19 cases have shot up by almost 150% from 145,000 in the first week of April 2021 to more than 355,000 this week, LocalCircles conducted another survey to gauge if people who have gone to the vaccination centers are still experiencing vaccine shortage. The survey received more than 8,000 responses from citizens located in 255 districts of India. 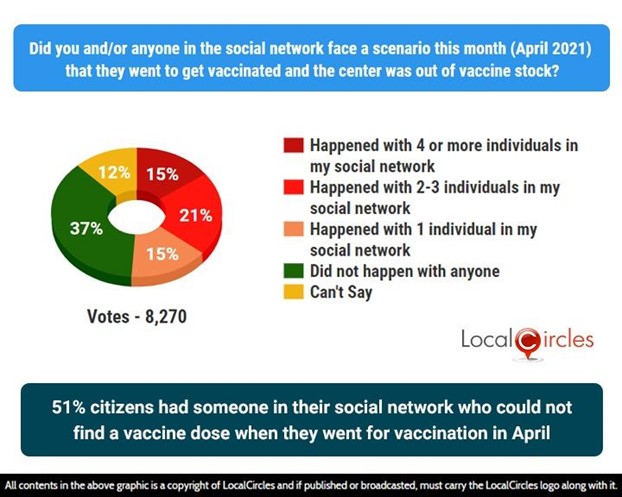 The last LocalCircles vaccine shortage survey released on April 11th, 2021, indicated that only 18% of citizens were unable to find a vaccine dose at the vaccine center. With more people starting to take the jab as COVID-19 cases continue to touch new highs across the country, logistics and supply issues, the shortages of vaccine doses per citizen feedback have shot up at vaccination centers. In the last 3 weeks, the percentage of citizens reporting shortage at vaccination centers goes up by 3 times. 51% of citizens or their family and friends faced the issue of going to a vaccination center but not getting the vaccine dose is something that must be looked into by the Central and State Governments. 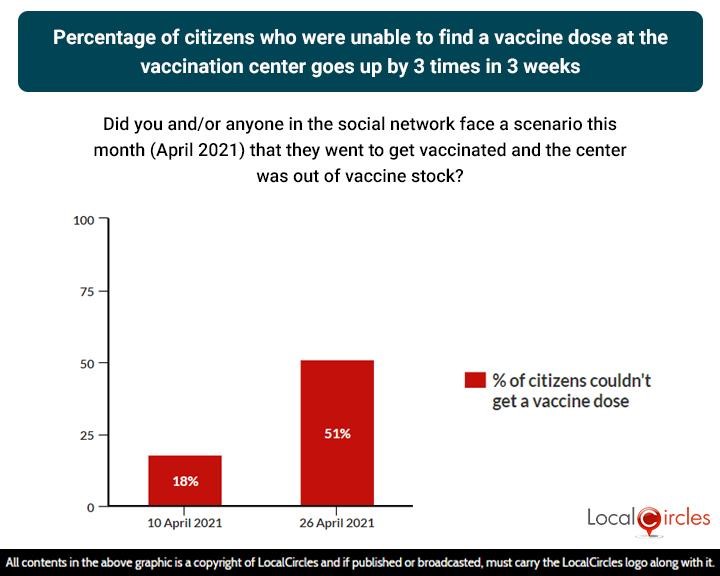 The shortage may be due to sub-optimal local distribution while it is also possible that certain centers or locations have a genuine shortage. It must also be noted that as the 2nd wave of Covid strengthened in India, 77% of citizens in the LocalCircles survey in early April expressed interest in taking the vaccine. The number stood at 38% when India started its vaccination drive thereby marking a major decline in vaccine hesitancy in the 3 month period. This decline in vaccine hesitancy could also be partly contributing to the demand-supply mismatch.

In summary, the findings of the survey indicate that 51% of citizens themselves or someone in their social network who could not find a vaccine dose when they went for vaccination in April. Both the Central and State Governments must identify the root cause of whether it is a local distribution issue or if there is a genuine shortage in certain locations. It can be mentioned here that the Serum Institute of India currently produces 2 million vaccines a day, and Bharat Biotech produces 0.3 million vaccines in a day. Given the massive 2nd COVID wave that India is experiencing, it is critical to fix this vaccine shortage and maximise vaccination along with testing, tracing, treating and containment. Global data vis-à-vis the Government data suggest that one might still contract COVID after 2 doses of the vaccine but the chances of them going to the ICU or dying are near zero, and hence India must do all possible to ensure it has enough doses available and they are administered at a rapid pace to ensure the country wins this fight against COVID-19.

LocalCircles will escalate the findings of this study with key stakeholders in the Central Government such that the above concerns and suggestions from citizens are looked into.