As Covid vaccination in India gets close to achieving the 1 crore or 10M mark, vaccine hesitancy continues to decline with 50% citizens now willing to take it

February 19, 2021, New Delhi: As India gets close to achieving the 1 crore or 10M vaccines administered milestone with less than 10,000 adverse events reported, LocalCircles is seeing a direct impact on vaccine hesitancy levels amongst citizens. Since October 2020, LocalCircles has been collecting responses from citizens to know their willingness to take the COVID-19 vaccine, aimed to understand if the percentage of reluctance or hesitancy has increased, reduced, or is unchanged, along with reasons for hesitancy. The hesitancy levels that were as high as 69% in the first week of January 2021 before the vaccination drive commenced on Jan 16th 2021, reduced to 58% on February 3rd when LocalCircles did the survey last. The majority of respondents in that survey maintained that they were largely worried about side effects, with a small percentage not sure about its efficacy. The same survey found out 42% of Indians were willing to take the vaccine with the number expected to go up to 65% if Government leaders take it.

With reports emerging that many healthcare workers were not showing up to take their second dose of the vaccine, LocalCircles conducted another survey to understand the hesitancy levels. Also, several private healthcare providers have been demanding that they be allowed to vaccinate the public and hence LocalCircles asked people if vaccination via private healthcare channels should commence now. The survey received over 16,000 responses from citizens located across 255 districts of India.

As vaccination in India gets close to the 10 million or 1 crore mark; vaccine hesitancy drops to 50%

The first question in the poll asked citizens, “India is getting close to vaccinating 1 crore people covering the healthcare and soon frontline workers, including people in your district. If you are approached for taking the same, what will be your preference?”. 42% said they “have taken it or will take it”, 21% “will wait up to 3 months”, 7% “will wait 3-6 months”, 9% “will wait 6-12 months”, and 8% “will wait 12+ months” and then decide. There were only 3% of citizens who “will not take it at all”, while 8% “will take it whenever it is available via private hospitals/channels”. The findings that received 8,211 responses indicated that vaccine hesitancy amongst citizens had dropped to 50%.

As India gets close to vaccinating 10 million or 1 crore citizens; vaccine hesitancy drops to 50% 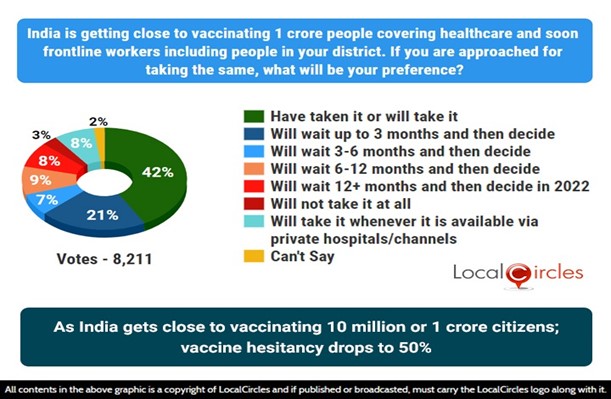 Though vaccine hesitancy dropped by approximately 20% in a month, 50% citizens are still hesitant to take it immediately

There’s been a varying degree of enthusiasm ever since the inoculation of two vaccines—Covishield and Covaxin —available in India. The last LocalCircles vaccine hesitancy survey conducted on February 3rd, 2021, indicated that 58% of citizens were still hesitant to COVID-19 vaccine immediately. The majority of respondents in the survey maintained that they are worried about uncertainty about side effects. As more people started to take the jab, amid the decline in COVID-19 caseloads, hesitancy amongst citizens is showing a continued decline. This week, the percentage of hesitant citizens stands at 50%. A month ago, i.e. in early January, the percentage of citizens hesitant to take the vaccine was 69% which dropped to 62% at the end of the second week when vaccination began. The hesitancy level then dropped to 60% in the third week of January 2021 to 58% in the first week of February 2021 and is at 50% this week. This means that vaccine hesitancy amongst citizens has approximately dropped by 20% just within a month’s time.

The low number of adverse events i.e. less than 10,000 on close to 1 crore vaccine doses administered along with many people now having someone in their extended social network who has actually taken the vaccine and did not experience any major side effects are two reasons that can be attributed for the declining vaccine hesitancy.

Though Vaccine Hesitancy dropped by approximately 20% in a month, 50% citizens still hesitant to take it immediately 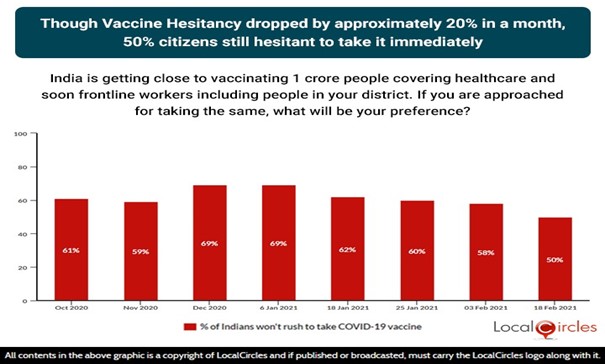 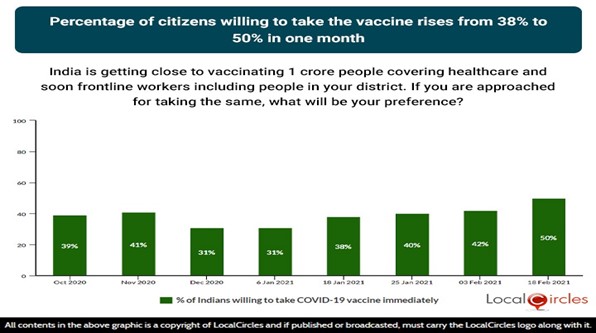 Citizens at present split even on whether Government should allow vaccination of public through private healthcare channels; more support if Government waits 3 months to open the same

In the last survey, LocalCircles had highlighted that 39% of hesitant citizens were willing to take the COVID-19 vaccine if senior leaders in Central and State Government, their MPs and MLAs inoculate themselves. This week the survey tried to find out if private healthcare should be permitted at this stage to administer the vaccine to public. Several of them have been requesting the same citing vaccines going waste or the amount of vaccines being exported to other countries. As of now, a final decision has not been taken on the roll out of Covid-19 vaccines via private healthcare channels. Health Minister Dr Harsh Vardhan recently said during the media briefing held at the national capital and hinted that it will take time for the vaccines to be available in the private market since they still have only emergency use authorization.

To understand the pulse of citizens on the issue that whether the Government should now make COVID-19 vaccines available via the private healthcare channels, the majority of 47% said “Yes”. There were, however, 29% of citizens who said “No, wait another 3 months”, 7% said “No, wait for another 6 months”, while 12% said “should not be done this year at all”, while 5% voted, “can’t say”. The poll result that received 8,220 responses indicated that citizens at present are divided whether the Government should allow vaccination of the public through private healthcare channels. However, if the Government waits 3 months to open the same, most will be supportive of the same.

Citizens at present split even on whether Government should allow vaccination of public through private healthcare channels; wait 3 months to open the same is majority view 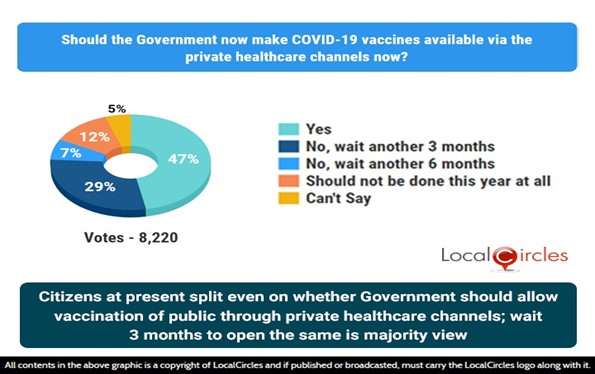 In summary, as the inoculation drive approaches the 10 million or 1 crore mark in India, vaccination hesitancy is reducing week over week with approximately 20% drop in hesitancy within the last month. However, the hesitancy level of 50% is still quite high. In the previous survey, LocalCircles had highlighted that one sure-shot way of reducing the vaccine hesitancy is leaders in Central and State Governments, MPs and MLAs inoculate themselves. The survey outlined a 23% increase in willingness which could basically mean that vaccine hesitancy could drop to 27% in India with the leaders taking the vaccine.

In addition, making district-level vaccination and adverse event data available on fingertips to people will help build the confidence further, was also another point the LocalCircles stresses upon as the then survey found out that 62% of Indian citizens don’t have access to data related to vaccination centres, daily vaccinations, adverse events in their district. Even the Aarogya Setu app does not have such information at district levels.

LocalCircles will share the findings of this study with key stakeholders in the Government as always such that these inputs can be considered for policy and enforcement actions as fit.