With 28% Indians planning to travel in August-September, risk of the 3rd COVID wave set to rise

June 26, 2021, New Delhi: As daily COVID-19 cases fall steadily across the country, states have eased restrictions for inter-state travel as part of their phase-wise unlocking, especially on the need to carry a negative RT-PCR test result, while a few states are allowing in only the vaccinated travelers, and others with a valid COVID ePass. Many citizens had cancelled their travel plans amidst the drastic surge of the 2nd wave of COVID-19 that reached its peak in April and May. As most states have unlocked fully, airlines are reporting an increase in traffic and demand since the last week of May. Online search interest amongst travelers for accommodation across India has also increased significantly since June 1. An online search on destination insights also suggests that travel demand has been on the rise since May-end. Airliners, hoteliers, travel agencies and related stakeholders hope that July and August would cover their loss accrued during the lockdown induced by the 2nd wave of the outbreak. Many International destinations like Switzerland, South Africa and Egypt have also started allowing Indians on tourist visas.

Although the daily cases in India have declined significantly for nearly two months from the 400,000 to the 40,000 range, infections in some districts continue to remain on an upward trajectory, particularly in Kerala and Maharashtra. The test positivity rate in as many as 45 districts across India is reportedly still 10% or higher. Prime Minister Narendra Modi earlier this month expressed concerns about overcrowding at tourist destinations and markets and about the COVID situation in Maharashtra and Kerala as they have been reporting an increasing number of infections. It can be recalled that the spread of infection was highly concentrated in Maharashtra at the start of the 2nd wave but the impact was later felt all across the country. PM Modi has told the Council of Ministers that there should be no space for carelessness or complacency and directed the ministers to take all possible precautions to contain and mitigate the spread. Experts have warned that with crowds building up, low adherence to covid appropriate behavior, the 3rd wave is inevitable, and it could hit the country in August-September. Some experts have also highlighted the danger of Delta-Plus variant spreading, though so far the number of cases of Delta Plus variant identified via genome sequencing across India have been less than 500.

The majority of states have capped a limit on the number of guests a hotel can accommodate at a time, and similar restrictions have been imposed on public places such as restaurants, malls, cinema theatres, parks, etc. Experts have warned about the persistent danger of a surge in COVID infection if COVID norms are not followed. The SARS-COV2 virus is airborne, and aerosols can travel up to 30 feet. Surface transmission is also a way of spread. With all these risks inherent in airports, airplanes, trains, railway stations, hotels, tourist public destinations, etc. and a lot of people out travelling once the virus starts spreading, it can get to a lot of people rapidly. On April 12th, LocalCircles found that 25% citizens were planning summer travel and immediately escalated to Central and State Governments to consider imposing immediate lockdowns to limit travel and prevent the spread. While some states acted immediately, several others took 2-3 weeks before imposing travel restrictions for their state which led to increased spread and literally havoc in some states.

During the 2nd wave of the outbreak, many citizens faced teething issues to cancel their travel plan for the summer. In many cases, the travel agent or the airline did not refund anything, and some citizens lost the complete ticket amount, while some were able to retrieve a partial amount, and others were asked to rebook the ticket for a later date. The Ministry of Civil Aviation (MoCA) in April had to hold a meeting with representatives of airlines in connection with refund of credit shells of passengers. As many citizens now look forward to travelling in August and September, the first question in the survey sought to know about their current plan. In response, 63% of citizens said they don’t have a plan to travel during these 2 months. 5% said they have plans and have booked the tickets, along with stays. 23% said they have a plan to travel during these 2 months but have not booked tickets and they stay yet. 9% are undecided. This question in the survey received 9,146 responses. 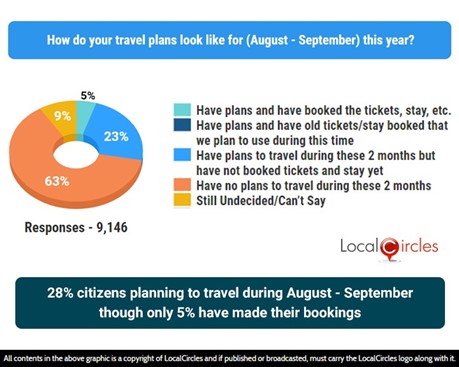 Of those who plan to travel in August-September, 54% plan to visit family and friends

During this time, many parts of India have holidays for festivals like Rakhi, Janamashtmi, Muharram, Independence Day, Onam, Ganesh Chaturthi to name a few and there is a good bit of travel that takes place. Many also tend to club these holidays with weekends by taking a day or two off. The next question in the survey asked citizens about what kind of personal travel do they plan to undertake in the next 2 months. In response, 13% citizens said “(1) holiday destination”, 39% citizens said “(2) visit family and friends” and 22% said “(3) other travel”. Breaking down the poll, 7% of citizens surveyed opted for option “1 & 2”, and 2% opted for “1 & 3” kinds of personal travel. 4% voted for all “1, 2 & 3” options, and another 4% voted “2 & 3”, while 9% did not have an opinion. The results of the survey indicate that of those who plan to travel in August-September, 54% will be visiting friends and family. This question in the survey received 9,134 responses. 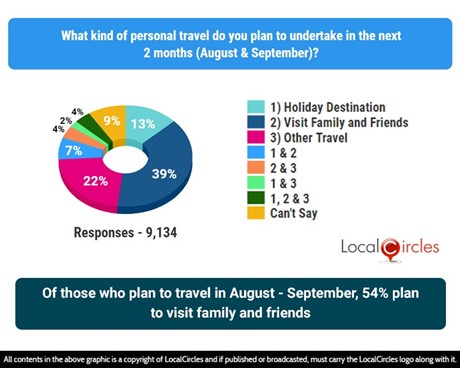 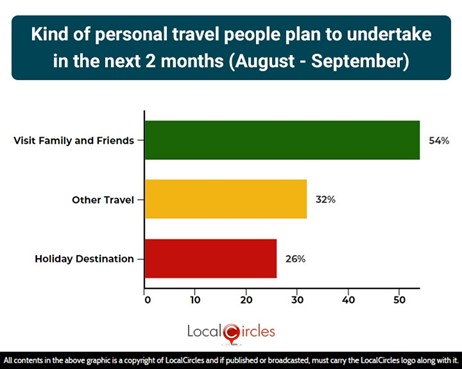 On an aggregate basis, if the data of those planning to travel in August-September is analysed, it indicates that 54% plan to visit family and friends, 26% will be travelling to holiday destinations, and 32% will be undertaking other kinds of travel.

The Government must continue to create awareness amongst people about limiting non-essential travel till the time the risk of a 3rd COVID wave greatly reduces. The biggest challenge with travel when the virus is spreading was observed in March and April during the Kumbh Mela when as devotees went back to their hometowns, many came back with the infection.

LocalCircles will be submitting the findings of this survey with Central Government and State Governments so the same can be used as an input in policy decisions in regard to mitigating the risk of the 3rd COVID wave in India.