July 28, 2021, New Delhi: Many schools in India have been on an indefinite lockdown since March 2020 due to the spread of COVID-19, with a few months of physical schools in February-March this year, taking studies from physical to online classes in most urban and semi-urban locations. There have, however, been teething issues, especially in the rural belt, where data connectivity and access to smartphones and laptops are not available to a large number of students. In many cases, families with more than one school-going child have only one smartphone, mostly unsuitable for online learning, and that too is often required by parents for personal use. It has mostly been self-study or homeschooling for such children which in most cases means very little or no progress. Children have also been deprived of free midday meals due to the shutdown of schools. Overall, for the privileged children, the education has continued online while for those without access to devices and connectivity, it hasn’t. Almost all children have felt the physical, mental, and social impact of the COVID pandemic-induced shutdown of schools.

Although the daily cases in India have declined significantly for over 75 days, the infection rate in some districts continues to remain on an upward trajectory, particularly in Kerala and Maharashtra. The test positivity rate in as many as 54 districts across India has been higher than at 10%. Amidst hesitancy to reopen schools amongst parents in most states, LocalCircles has conducted another survey to understand what Indian parents think about reopening schools for physical classes come August 1. The survey also asked parents if they are willing to send their children if schools reopen from August 1. It also compared the findings of the survey with similar surveys conducted earlier to gauge how the perception of parents on reopening of schools has changed over the period. The survey received feedback from more than 32,000 parents residing in 361 districts of India. 68% of the participants were men while 32% were women. 47% of respondents were from tier 1 districts, 27% from tier 2 and 26% respondents were from tier 3, 4 and rural districts.

48% parents not willing to send their children to school till they are vaccinated while another 30% will send if cases become zero; 21% will send regardless

Vaccinating children in the coming months is going to be key if children are to go to school for physical classes. The Health Minister Mansukh Mandavia this week confirmed that COVID vaccine for children will be available by August. Gujarat-based company, Zydus Cadila has developed a COVID DNA vaccine, called ZYCOV-D, a 3-dosepatch vaccine expected to be soon available for all above the age of 12. Other vaccines for children in the pipeline are the MRNA vaccine developed by Moderna, Bharat Biotech's inactivated vaccine doing trials on children aged between 6-18, Pfizer's Messenger RNA vaccine which has already done its trial for children 12 and above. Johnson & Johnson's viral vector vaccine is also doing trial on children between 12-17 years, and Sinovac vaccine has been approved in China for children aged between 3-17.

Given the prevalent COVID situation in the country, the question in the survey asked parents when would they be willing to send their children or grandchildren to school for physical classes. In response, 21% of parents said “whenever the school reopens, or I am ready to send now”. Breaking down the poll, 14% of parents said “not till cases in my district go down to zero”, 16% said “not till cases in my district and nearby districts go down to zero”, and 48% said, “not till the children are vaccinated”. 1% of parents did not have an opinion. On an aggregate basis, 78% of parents are not willing to send their children to school till cases in their district go to zero or children get vaccinated. This question in the survey received 16,052 responses. 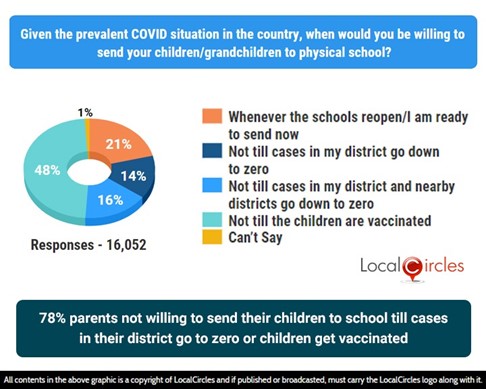 In a related survey by LocalCircles released in June 2021, 37% of parents wanted schools to reopen only after the children are vaccinated. This percentage has increased to 48% of Indian parents now willing to send their children to schools only they are vaccinated. With growing evidence that the Delta and Delta plus strains are found to be more harmful to children than the strains of 2020 including the UK strain, the survey findings indicate that vaccination hesitancy among parents to get their children inoculated has reduced. 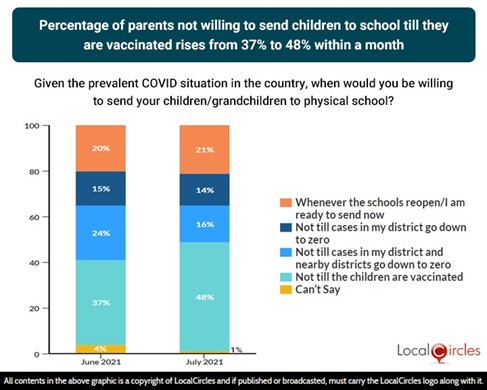 However, if schools actually reopen, 41% of parents will send their children to school, albeit with some conditions

States like Haryana, Rajasthan, Madhya Pradesh, Punjab, Gujarat, Maharashtra, Andhra Pradesh, Chattisgarh and Bihar have either opened schools or announced plans to open them while all other states have not announced the opening of schools yet.

The following question in the survey tried to better understand from parents about their willingness to send their children to schools for physical classes come August 1 if their State Government or local administration permits the re-opening of schools. In response, 52% of parents said “No, will not send”. However, there were 14% of parents who said “Yes, will send”, 27% said, “Yes, will send only if they open at 50% capacity and strictly follow COVID protocols”. 7% did not have an opinion. The findings of the survey indicate that if schools reopen, 41% of parents will send their children to attend physical classes, albeit with some conditions. This question in the survey received 16,089 responses.

The findings of the survey indicate that 41% parents will send children to school if the school were open indicating that the fear of missing out may lead many parents to cross the line who otherwise would favour that schools continue to remain shut till cases go down to zero in their district or children get vaccinated. 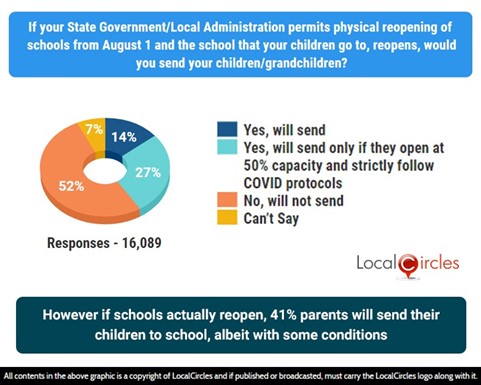 However, when parents were asked what they would do in regard to sending their ward if the schools decide to reopen, 41% parents said they would send their children to school with almost 20% parents likely saying so because they do not want their children to miss out on in-person classes. Most of these parents want the schools to follow COVID safety protocols effectively.

If the citizen feedback in the survey and discussions were to be put together along with the announcement by Government that a vaccine for children may be available by August, the key to unlocking schools may be opening them based on state and district level conditions. An approach to consider may be for states with low number of cases across all districts to announce opening of schools and to authorise local administrators or the District Magistrates to permit opening of schools on a voluntary basis and announce closure if caseloads increase. Schools can then decide if they want to open fully, continue in online mode for some classes and open for certain classes or continue in online mode fully. For states where there is still a certain number of districts with high caseloads and TPR above 10%, the schools should continue to stay shut till the situation improves. If the schools are functioning already in districts with zero or low case loads, the suggestion of some parents on LocalCircles about vaccination for children being done at their schools definitely merits a consideration.

LocalCircles will share the findings of this survey with key stakeholders in the Central Government and Chief Secretaries of all states so inputs of the parents can be considered as they decide their school reopening, sustainment and child vaccination strategy.

The survey received feedback from more than 32,000 parents residing in 361 districts of India. 68% of the participants were men while 32% were women. 47% of respondents were from tier 1 districts, 27% from tier 2 and 26% respondents were from tier 3, 4 and rural districts. The survey was conducted via LocalCircles platform and all participants were validated citizens who had to be registered with LocalCircles to participate in this survey.