Despite risk of Omicron, 14% still likely to go to cinema halls to watch a movie in the next 60 days

December 28, 2021, New Delhi: The Indian cinema hall and multiplex industry started reopening in most states and UTs from July 30th, with the decline in daily COVID-19 cases, in line with safety protocols and a strong focus on vaccination of the staff. With movies like Sooryavanshi, Spiderman No way Home and last week’s 83, people have started going to theaters once again now. Upcoming movies like ‘Jersey,’ ‘Deep water’ and ‘The King’s Man’ are scheduled to release within the next two weeks that are also likely to attract large crowds. However, as this momentum builds, India has recorded over 550 cases of Omicron in the last few weeks and the daily COVID caseloads in many parts of the country are once again rising. Delhi has seen its daily cases quadruple in the last 3 weeks from an average of 80 to near 300 and TPR rising from 0.05% to 0.55%. Per Delhi’s COVID GRAP or Graded Response Action Plan, if TPR exceeds 0.5%, cinema halls must be closed along with schools, colleges and gyms and night curfew must be imposed from 10 pm – 5 am. Mumbai, the center of Bollywood, is in an even more challenging situation with the TPR crossing 2.6% last week.

The first question in the survey asked citizens about the number of times they’ve visited cinema halls or multiplexes in the last 60 days. In response, 3% of citizens said they went “multiple times”, and 11% “went once”. Breaking down the poll, the majority of 65% of citizens said they “did not go”, and 21% said it’s “not applicable or don’t watch movies in multiplexes or cinema halls”. On an aggregate basis, only 14% of citizens have visited a cinema hall or multiplex to watch a movie in the last 60 days. This is the period of October – December. This question in the survey received 8,605 responses. 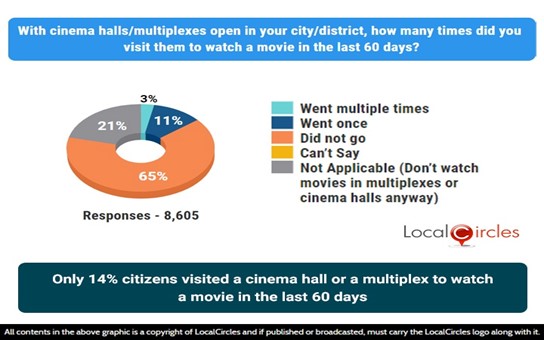 Despite risk of Omicron, 14% say they will go to the theater/multiplex to watch a movie in the next 60 days

The next question in the survey asked citizens if they would visit cinema halls or multiplexes in the next 60 days. In response, 2% of citizens said they plan to go “multiple times”, and 12% plan to “go once”. Breaking down the poll, the majority of 62% of citizens said they have “no plans to go” and 20% said “its not applicable or they don’t watch movies in multiplexes or cinema halls”. 4% did not have an opinion, or they have not yet decided. On an aggregate basis, 14% of citizens plan to visit a cinema hall or multiplex to watch a movie in the next 60 days. This question in the survey received 8,317 responses. 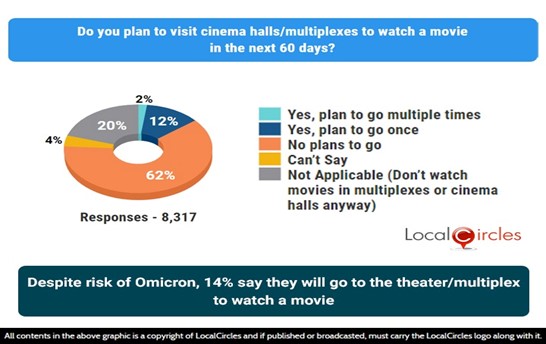 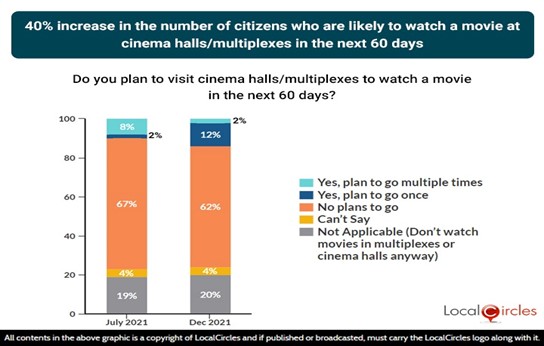 With not enough awareness amongst the public about the infectious nature of the Omicron variant (known to be 3-5X more transmissible) and the fact that the virus is likely to spread much more in poorly ventilated indoor spaces, the risk of spread of Omicron via cinema halls and multiplexes is high. Add to it the poor mask discipline followed by people, it leads to the risk going up multifold. In the latest LocalCircles survey conducted in early December, only 2% of citizens said that there is effective mask compliance in their area/district/city. It must be noted that if two individuals within 6 feet of each other are not wearing a mask and one of them is infected, it takes 40 seconds for the other person to contract the infection. Though most cinema halls and multiplexes claim that mask is mandatory, once the crowd is seated there is zero enforcement. Non-compliances have been reported by citizens on LocalCircles from across the country stating that is it only for entry that some cinemas require people to be masked.

Visiting theatres and multiplexes to watch a movie has been one of the favourite recreational activities for many Indians, but the COVID virus has made things tricky for most theaters across the country being poorly ventilated indoor spaces, and the risk goes up several notches with Omicron spreading. The findings of the LocalCircles survey indicate that despite the risk of Omicron 14% of citizens still plan to go to movie theaters to watch a movie in the next 60 days which translates to about 19 crore citizens including children. Given the level of awareness and the very high risk, the Central and State Governments and district administrations must watch the situation closely and the moment there is a visible trend of rising TPR day over day, cinema halls must be closed to prevent further spread.