March 21, 2022, New Delhi: The country is recording a continuous decline in the daily COVID cases, which saw an exponential rise up to more than 350,000 in just over a month till mid-January, with the daily cases now at 2,000, the lowest since the start of the pandemic. States and UTs have now removed restrictions on public movement amid other relaxations. Public places like malls, restaurants and multiplexes have reopened at full capacity, with some states mandating vaccination certificates for entry. After a month-long pause in the theatrical release of new movies, fresh film content is beginning to drive footfalls and occupancy in cinemas.

Per media reports, the release of the film ‘Kashmir files’ witnessed a footfall similar to pre-pandemic levels, with theatres having to increase the number of daily shows to accommodate demand. Multiplexes across the country have reported the fastest recovery after the 3rd wave than any other waves. Industry experts believe that a pile-up of Bollywood releases over the rest of the financial year will continue to ensure footfall. Per industry players, 22 Bollywood films are due to release in 2022 that have the potential of crossing INR 100 crore at the box office.

However, the risk of infection remains as seven cases of the BA.2 + S:I1221T have been found in India, with Indian SARS-CoV-2 Genomics Consortium (INSACOG) reporting 7 cases already in Maharashtra, Puducherry and Ladakh. Countries in Europe and Asia are now grappling with the rise of new sub-lineages of BA.2. One of them, BA.2.2, is driving nearly 300 daily deaths in Hong Kong. With rising cases, China last week put over 30 million citizens under a strict lockdown and South Korea is also seeing nearly 6 lakh daily cases. India will have to be super vigilant on COVID developments and expand genome sequencing efforts.

LocalCircles since August 2020 has been tracking public pulse on visiting cinema halls to watch a movie and has been regularly giving inputs to the government, along with recommendations to open and close them in the interest of public safety. With a lot of community members now talking about new movie releases amid the decline in cases, LocalCircles conducted a survey to understand how many citizens visited a cinema hall or multiplex in the last 60 days and how many plan to do so in the next 60 days. It then compares the findings with a previous survey conducted in December 2021. The survey received over 19,000 responses.

The survey asked citizens, “With COVID cases reducing, how many times did you visit a cinema hall/multiplex to watch a movie in the last 60 days?” In response, 5% of citizens said they “Went multiple times” and 20% said “Went once”. There were also 49% of citizens who “Did not go” and 24% said “Not applicable (Don’t watch movies in multiplexes or cinema halls anyway)” while 2% couldn’t say. On an aggregate basis, 25% of citizens visited a cinema hall or a multiplex to watch a movie in the last 60 days. This question in the survey received 10,011 responses. 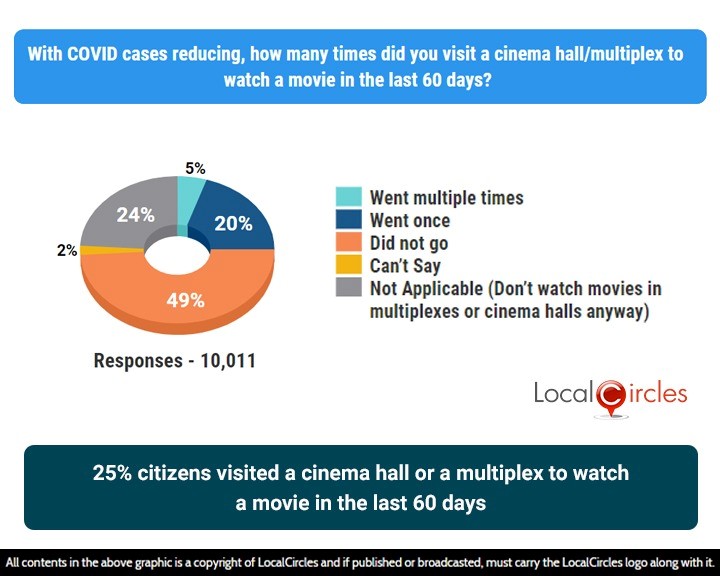 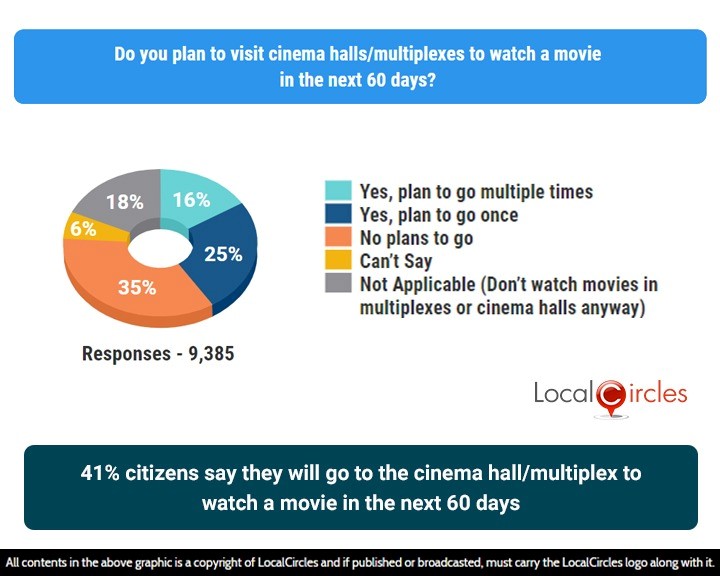 In a previous survey conducted by LocalCircles in Dec 2021, 14% of citizens visited a cinema hall once or more, which rose to 25% in March 2022, marking a nearly 75% increase in the percentage of people that have been to a cinema hall. 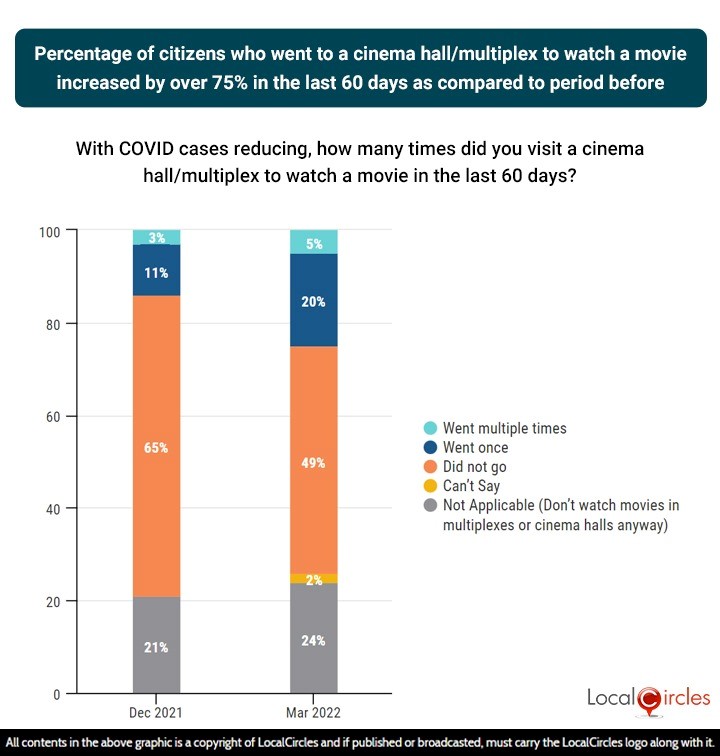 Similarly, in a previous survey conducted by LocalCircles in Dec 2021, 14% of citizens had expressed plans to visit a cinema hall once or more in the coming 60 days, which rose to 41% in March 2022, marking a 3X or 200% increase in the percentage of people that plan to visit a cinema hall. 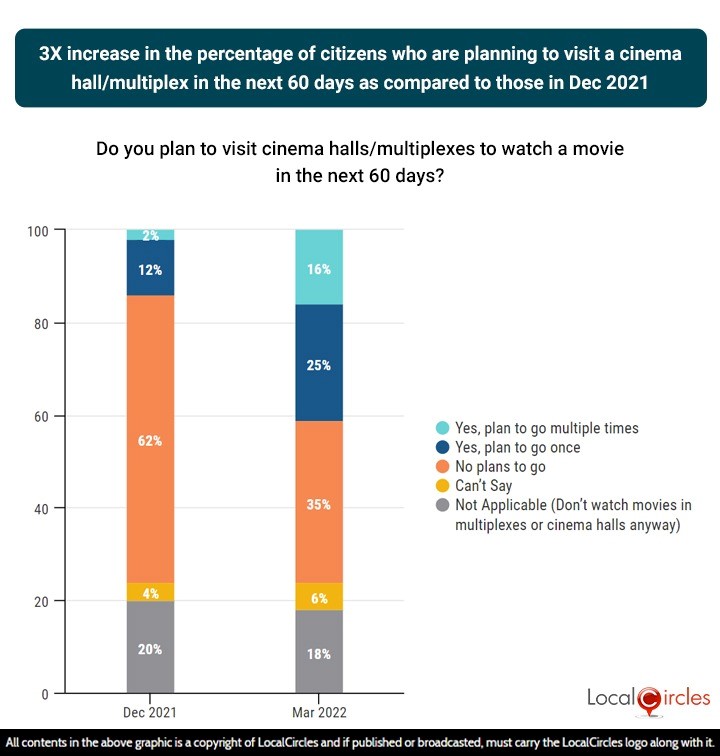 To summarise, 25% of citizens said that they have visited a cinema hall or multiplex in last 60 days and 41% have expressed that they are likely to visit a cinema hall in the next 60 days, which is a 3X or 200% increase from the 14% who had such plans in Dec 2021. The findings indicate that several hundred million people could be watching a movie in a cinema hall in the coming 2 months. After two difficult years, it does appear a Diwali on Holi for the cinema hall and multiplex operators.