International Anti-Corruption Day: 2 in 5 citizens who got COVID treatment at a hospital during the 2nd wave had to pay a bribe 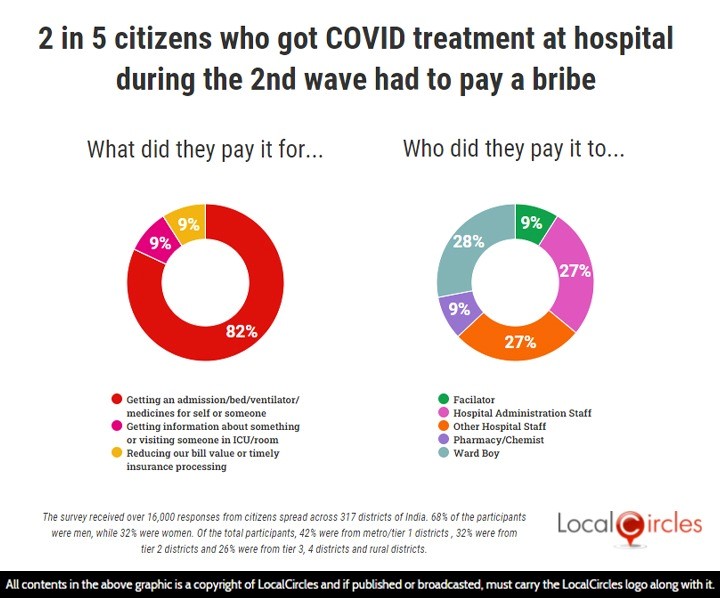 December 9, 2021, New Delhi: Bribery is just one form of corruption and often obligatory to get the work done paying suborn in the form of cut-money or illegal commission. During the 2nd wave of the COVID-19 outbreak, bribery was so rampant that at the time of “health emergency”, caregivers had to pay a bribe to avail admission, bed, ventilator or medicine or even information about the patient. Media reports were rife about cases of black-marketing and perpetrators charging out-of-pocket rates to caregivers for ambulance service, oxygen concentrator & cylinder, medicine required to treat a COVID patient.

Ahead of the International Anti-corruption day on Dec 9th, LocalCircles conducted a survey to better understand corruption that took place at hospitals during the 2nd COVID wave. It tried to understand all the reasons why citizens who received treatment for covid in a hospital had to pay a bribe.The survey received over 16,000 responses from citizens spread across 317 districts of India. 68% of the participants were men, while 32% were women. Of the total participants, 42% were from metro/tier 1 towns, 32% were from tier 2 towns and 26% were from tier 3 & 4 towns and rural locations.

Of those who got COVID treatment at a hospital during the 2nd wave, 39% had to pay a bribe

The 2nd wave of COVID in Indiawas primarily led by the Delta variant of SARS-CoV-2. It soon spread across the country so rapidly causing chaos across hospitals to face shortages of hospital beds, ICU beds, ventilators, medicines, oxygen and all things COVID. The healthcare infrastucture was unable to handle the volume of COVID cases, leaving a fertile ground for perpetrators to take advantage of the situation of caregivers in exchange of money or a bribe. In the absence of a proper system to get an update about the patient’s health status, many caregiver even bribed ward boys to get the updates.

The first question in the survey asked citizens, “If you or a family member paid a bribe at a hospital during the 2nd wave of the COVID-19 pandemic, what was it for?” It was found out that 61% of citizens “did not pay a bribe for COVID-related treatment at a hospital”. However, of those respondents who got COVID-related treatment at a hospital, 39% of citizens surveyed had to pay a bribe. Of whom, 32% paid it for “getting an admission/bed/ventilator/medicines either for self or someone”, 4% paid a bribe for “getting information about something or visiting someone in the ICU room”, and 3% paid it for “reducing bill value or timely insurance processing.” This question in the survey received 8,970 responses. 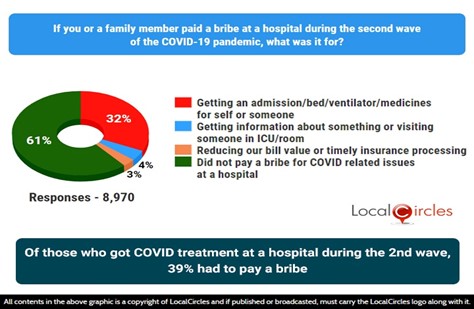 Of those who had to pay a bribe at a hospital, 82% paid it to get admission, bed, ventilator or medicines; 9% paid it to reduce bill amount; 9% to get information or visit someone in ICU

Alternatively, if one were to just examine the subset that paid a bribe at a hospital for COVID treatment during the 2nd wave, 82% paid it for “getting an admission/bed/ventilator/medicines for self or someone”, 9% paid it to “get information about something or visiting someone in the ICU room”, and another 9% had to pay it for “reducing our bill value or timely insurance processing”. 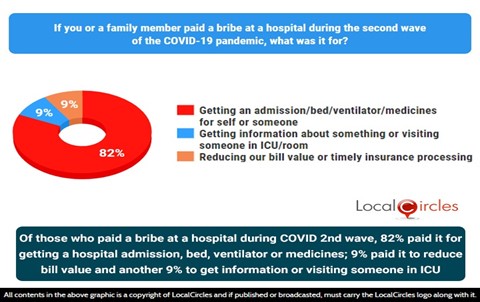 Of those who paid a bribe for COVID treatment at a hospital during 2nd wave, 82% paid it to hospital administrators and other staff, ward boys; No one paid a bribe to a doctor or nurse

The second question in the survey sought to know from citizens who paid a bribe at a hospital as to whom it was paid. In response, 27% said they paid a bribe to a “hospital administration staff”, another 28% said they paid it to a “ward boy,” 9% paid it to a “facilitator (local politician or leader, Government employee, middlemen)”, another 9% paid it to a “pharmacy or a chemist”, while 27% paid it to “other hospital staff”. Notably, there weren’t any citizens who admitted to having paid a bribe to a doctor or a nurse when the option was given. On an aggregate basis, 82% of citizens surveyed admitted paying a bribe to administration staff and other staff members of the hospital. This question in the survey received 7,249 responses. 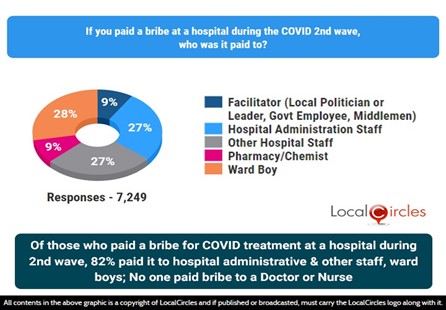 It must be noted once again that the practices of black marketing and overcharging which were rampant during the 2nd COVID wave have not been qualified as corruption. The LocalCircles survey on Black Marketing during the 2nd COVID wave conducted in September 2021 found that 13% of citizens were overcharged for a COVID RT-PCR test, while 19% of those who purchased COVID related medicines (Tocilizumab, Remdesivir, Fabiflu, etc.) were charged more than MRP. Further, 70% of those who needed an ambulance service for a COVID patient during the 2nd wave were also overcharged and half of them paid over 5 times the price. The findings of the survey also revealed that 36% of those who purchased COVID related supplies (oximeters, oxygen concentrators, cylinders, etc.) were charged over MRP during the 2nd wave. While they have not been qualified as corruption by LocalCircles, these are also malpractices that caused lot of citizen grievances and need Government action in preparation of a 3rd COVID wave.

In summary, the findings of the survey indicate that though the majority did not pay a bribe for COVID related issues at a hospital during the 2nd wave, 2 in 5 citizens admitted paying it to avail of COVID related treatment, especially for “getting admission/bed/ventilator/medicines either for self or someone”, “getting information about something or visiting someone in the ICU room”, and “reducing bill value or timely insurance processing”. While bribes were not paid to doctors and nurses at a hospital, other staff, especially hospital administrators and other staff like wardboy, took bribes during the COVID 2nd wave.

Omicron, the variant of concern has now been detected in over 50 countries, while India has detected over two dozen cases of the variant suspected to be 5X more transmissible. With what many countries around the world are experiencing there is high likelihood of a Omicron led 3rd wave in India. If this happens, it is likely that many once again may need hospitalisation and ICU admission and hence it is critical for India to understand and address these issues of corruption highlighted in this report and act with urgency such that there are strong disincentives in place if such malpractices are found in the future. The starting point can be awareness creation amongst all State and District hospitals, healthcare centers and with private hospital associations and promoters.

The survey received over 16,000 responses from citizens spread across 317 districts of India. 68% of the participants were men, while 32% were women. Of the total participamts, 42% were from metro/tier 1 towns, 32% were from tier 2 towns and 26% were from tier 3 & 4 towns and rural locations. The survey was conducted via LocalCircles platform and all participants are validated citizens who had to be registered with LocalCircles to participate in this survey.