61% Indians feel angry, upset, depressed and worried; 51% say experts do not have a handle on what’s causing the massive COVID surge

May 5, 2021, New Delhi: The COVID-19 caseload in India is surging at an unprecedented pace, crumbling its weak health infrastructure. The highest daily caseload India saw last year was 97,400 on September 10, which has grown by over 4-fold to more than 400,000 now. What is extremely worrying is the pace at which the 2nd wave has hit India. From 16,000 reported cases on March 14 to over 25 times at 402,000 in just 45 days has wreaked havoc that no one imagined. As shortages of ICU beds, Oxygen Beds, Covid medicines, testing, oxygen and worst of all cremation space has hit India badly. With thousands of SOS messages on social media regarding oxygen, beds, medicines, seeking assistance. 3 hospitals in Delhi have had deaths because of shortage of oxygen and many more received oxygen tankers just in time, barely saving lives.

The Ministry of Health & Family Welfare and experts in their briefings have outlined that India has two primary variants, mainly B.1.1.7 (UK variant) and B.1.617 (double mutation), currently driving the 2nd wave of COVID. However, experts are inconclusive about which one of these variants is causing this rapid rise in infection and deaths, in young people, in their incubation period and airborne transmission; high transmission amongst children, and sudden drop in their oxygen levels. Based on information reported by citizens on LocalCircles, many individuals are showing symptoms without exposure to others, or showing symptoms within just a day of coming in contact with someone. Many pointed out that their family members have gotten COVID a few days after receiving vaccination at centers, citing the high possibility of some vaccination centers being super-spreaders as social distancing and masking protocols weren’t being followed. A series of questions are being raised to which experts do not seem to have clear answers.

To quantify how people of India are currently feeling given the current state of affairs, LocalCircles conducted a bottoms-up survey. It also asked people about their views on whether experts in India have an understanding of the 2nd COVID wave in terms of its root cause and how things are likely to evolve in the coming months. The survey also sought to understand what people think of the way India has handled the 2nd COVID wave so far. The survey received more than 25,000 responses from people located in 324 districts of India.

The 2nd wave of COVID-19 has been terrifying and a once-in-a-century health crisis in India. The increase in COVID cases by more than 400,000, taking thousands of lives every day, has caused levels of psychological damage to people’s lives. In states like Delhi, which has been significantly hit by COVID, almost everyone in the city has a family member or friend impacted by it. States like Uttar Pradesh, Chhattisgarh, Madhya Pradesh, Gujarat and Karnataka are all struggling from the deadly disease. With the shortage of all things COVID ranging from oxygen to hospital beds and from medicines to crematorium space, the pain that people are experiencing is extremely high. With lockdown-like restrictions being imposed in many states, people have also started to fear about their livelihoods, jobs, and to endure the pandemic.

The first question in the survey aimed to understand the collective pulse of citizens on their current situation facing the 2nd wave of COVID-19 in India. In response, 23% said “anxious or worried”, 8% said “depressed, gloomy or sad”, 20% said “upset and angry”, 10% said “extremely angry”, and 7% said “calm or peaceful”. Breaking down the poll, 28% feel “optimistic and hopeful”. Only 3% said “none of the above”, and 1% couldn’t say. The findings of the poll indicate that 61% of Indians are feeling angry, upset, depressed or worried as COVID 2nd wave wreaks havoc in the country. This question in the survey received 8,141 responses. 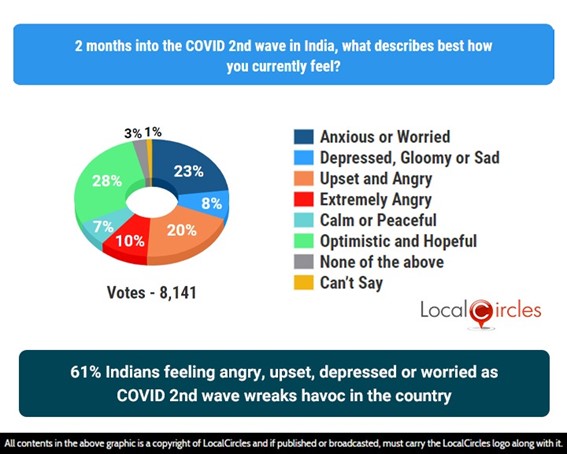 The 2nd wave of COVID-19 has been affecting people of all age groups, from less than 2-month-old babies to adults and families. Grim reports of shortage of ICU beds, oxygen supplies, overloaded hospitals, 6-8 hours waiting time at funeral homes in some cities are now a daily affair. To gauge citizens’ observation, the second question in the survey sought their response if they believe that the Government of India is on the right track as far as handling the 2nd wave of COVID-19 is concerned. In response, 41% said “Yes”. There were also 45% of citizens who said “No”, while 14% couldn’t say. The aggregate response indicates that citizens are split on whether India is on the right track in handling the 2nd wave of COVID-19. This question in the survey received 8,367 responses.

If one analyses the comments received from citizens, the 45% who do not believe India is on the right track have raised a series of concerns. Some have raised the key issue of Central and State Governments reluctance on preparedness on building capacities despite seeing many countries from around the world experiencing massive second wave. Many have also criticised India’s decision of restarting flights from the UK on January 8th after a 2-week suspension despite the country having 60,000 daily cases. Punjab in early April reported that 83% of the cases in the state were of the UK variant type after conducting the genome testing. Many citizens have also criticised the decision to continue with elections in 5 states despite signs of surge becoming visible from mid-March. Hundreds of citizens also raised objections to the Kumbh Mela celebration. People have highlighted that many returnees from the Mela have tested COVID positive.

Madhya Pradesh reported that 99% of those who came back from Kumbh tested COVID positive. Many believe that if India had prepared well, there would be a far fewer shortage of testing, medicines, hospital beds, oxygen and healthcare services. People also believe that the country still does not have a clear strategy to prevent the spread of COVID. Via LocalCircles, many are recommending that a single criterion must be implemented for district-level lockdowns across the country. In summary, wrong priorities, indecisiveness, and lack of preparedness are key reasons why 45% believe that India is not on the right track.

The 41%, on the other hand, who believe that India is on the right track state that all of this took India by big surprise and India is now enabling more hospital beds, oxygen supplies, and healthcare staff, local lockdowns which should help in recovering from the crisis. 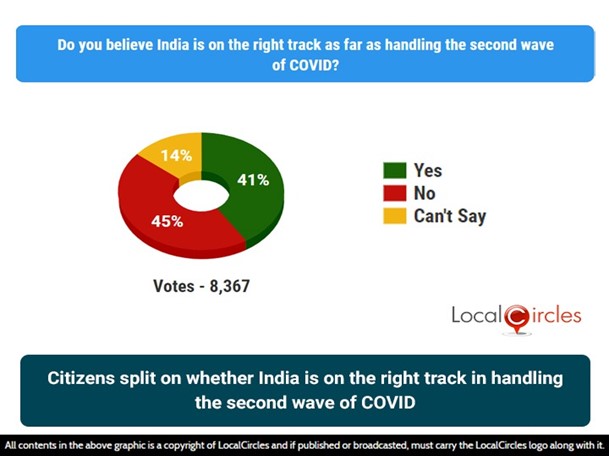 Based on public feedback, LocalCircles on January 9th, 2021 had written to the Government of India, stating that the B.1.1.7 (UK variant) risk was real, and given the caseloads in the UK, the flights must stay suspended till January 31st. However, flights were resumed on January 9 and continued to operate till the UK in late April put India on the red list and suspended all flights. This rate of transmission of COVID-19 in the 2nd wave has led many citizens to conclude that this surge is most likely the mix of UK strain along with the double mutant Indian strain. The Ministry of Health & Family Welfare and experts in their briefings have outlined that India has two primary variants, mainly B.1.1.7 (UK variant), and B.1.617 (double mutation) currently driving the 2nd wave of COVID. However, experts are inconclusive about which one of these variants is wreaking havoc across the country, People are largely going by the experience of others and what is being published in the media because experts in India have not been able to share much details on it. To understand from commoners, LocalCircles asked how confident they were that the experts in India have a handle on the root cause that is causing this surge. In response, 18% said “highly confident”, 25% said “somewhat confident”, and 28% said “very little confidence”. Breaking down the poll, 23% of citizens said “not confident at all”, while 6% couldn’t say. The findings of the poll indicate that 51% of citizens are unsure if experts in India have a handle on what is causing the massive 2nd surge in Covid cases. This question in the survey received 8,541 responses. 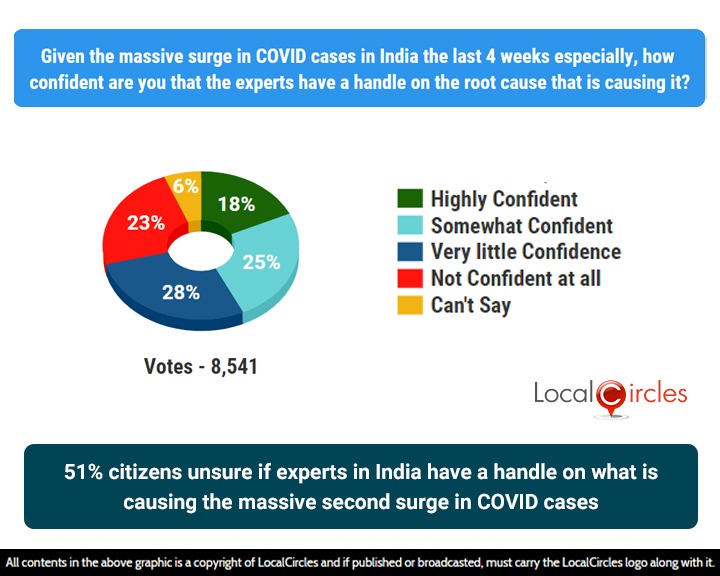 In summary, the findings of the survey indicate that 61% of citizens are currently feeling angry, upset, depressed, or worried as COVID 2nd wave wreaks havoc in the country. Given the fast-deteriorating situation, citizens surveyed are split on whether India is on the right track in handling the 2nd wave of COVID-19. The majority of citizens feel that India is not on the right track than the ones who feel the country is, indicates that people are losing confidence in its Government’s ability to overcome COVID-19. As the main cause of the havoc remains inconclusive, 51% of citizens conclude that they are unsure if experts in India have a handle on what is causing the massive 2nd surge in COVID cases.

India must engage all possible resources internally and externally to not only deal with the rampant healthcare shortages but also to find out the causes of the 2nd COVID wave in terms of SARS-COV2 strains and then take decisive action to contain the spread. If resources of other nations have to be roped in to address the shortage on genome testing of B.1.617, or to get COVID experts, it must be done. COVID is a global problem and what India is undergoing currently, other countries could in the medium term as 17 countries have now reported the presence of B.1.617. If all of this is not done on priority, 2021 is likely to be several times worse than 2020 in terms of loss of life, economic impact, social impact, and impact on the mental health of millions of citizens, their family, and friends.