June 23, 2021, New Delhi: The Government in its daily briefing announced this week that opening schools will be difficult till a major chunk of the population is vaccinated. With the 2nd wave of COVID-19 seeing even children and infants getting infected with the coronavirus, in such a scenario, the resumption of school according to medical experts may lead to an increase in the number of cases, particularly at the time the imminent threat of the 3rd wave of COVID-19 is expected to hit India in less than 2 months.

There is evidence to show that more children were affected in the 2nd wave than the first. 8,000 kids tested positive in May alone in a district in Maharashtra. Recently, Meghalaya reported 5,000 cases of COVID in the age group 0-14. In the first wave, 4% of the infected population were children. This share has increased to about 10%-20% in the second wave. So far, the mortality rate in children is low. The concern for the children of the country remains high as the vaccination for them is still in its trial stages. Serum Institute of India is planning to start the trials of Novavax on children in July. Bharat Biotech has two vaccines that are being tried on children, Covaxin and BBV154, a one-shot nasal vaccine. ZyCov-D, the Zydus' Covid-19 vaccine has also started trials on children in the age group 12-18 years. The Government of India is considering to provide legal indemnity to Pfizer and Moderna to roll out their vaccines in India. Pfizer has announced that its vaccine is safe for children above 12 years of age.

As COVID cases have been on a steady decline, several states have started the process of unlocking in phases. Some states are considering allowing the reopening of schools. For instance, Telangana announced reopening of all educational institutions, including schools and colleges from July 1. Similarly, Bihar is also in favour of reopening schools from June 1, starting with higher education institutions followed by middle and primary school. Uttar Pradesh is also considering reopening schools, however, only teachers will come and take classes from school. Madhya Pradesh is yet to make a decision, depending on the number of daily cases. Karnataka recently set up an expert committee that suggested the reopening of schools, although no announcement has been made in such regard. On the other hand, states like Delhi, Maharashtra, Assam and Jammu and Kashmir are likely to continue the current or upcoming school session in the online mode.

LocalCircles has conducted 6 surveys since March 2020 on the reopening of schools and regularly escalated them to Central and State Governments and the Governments have accepted every one of the recommendations so far. Given the lack of access to online education in many rural parts of the country and the fatigue of online classes as well as the risk of COVID spread and the possibility of a 3rd wave, LocalCircles conducted its next survey to understand the opinion of parents on sending their children to school. It also sought to know their opinion on vaccinating their children if the vaccine were to become available by September 2021. The survey received more than 19,000 responses from parents located in 293 districts of the country. 49% parents were from Tier 1 districts, 29% from Tier 2 districts and 22% from Tier 3, Tier 4 and rural districts of India.

The first question asked parents, “Given the infectious and airborne nature of COVID B.1.617.2 strain, when would you be willing to send your children/grandchildren to physical school?”. In response,37% said “not till children are vaccinated” while 20 % said “whenever schools reopen.” Breaking down the poll, 24% said “not till the cases in my district and nearby district go down to zero”, 15% said “not till cases in my district go down to zero”, and 4% could not say. Per aggregate response of the survey indicates that 49% of parents are not willing to send their children to school till cases in their district go to zero or children get vaccinated. This question in the survey received 10,826 responses. 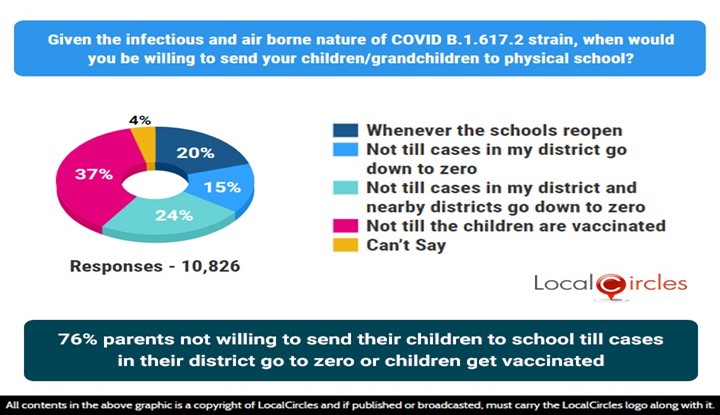 Earlier this month, CBSE Board exams were cancelled on account of student’s safety. When asked about reopening schools, NITI Aayog’s Dr. VK Paul stated that opening schools will be difficult till a major chunk of the population is vaccinated. Many countries during this year reopened schools and reported outbreaks, forcing them to shut down again.

In a related survey by LocalCircles in January 2021, 69% of parents wanted schools to reopen from April 2021 or after. This number has significantly dropped to 20% of Indian parents willing to send their children to school if they were to open in July. There is growing evidence that the new strain is more harmful to children. The same survey suggested that vaccination hesitancy among parents has reduced. While 26% of Indian parents approved of the vaccine for their children in January 2021, the number has increased to 65% in June 2021.

65% Indian parents approve of their children receiving the COVID vaccine if it is made available by September 2021; 21% want to wait atleast till December 2021

Earlier this week, the Government announced that studies have shown that the risk of hospitalization falls by 70-80% of a person is vaccinated. While India is working towards making the vaccine available to children between 12-18, the next question in the survey asked parents, “If the COVID-19 vaccine is made available for school children by September 2021, would you consider getting your children or grandchildren vaccinate?” In response, 65% of Indian parents said “Yes, will get them vaccinated right away” while 8% said “no, will not get them vaccinated in 2021.” Further, 21% “would wait 1-3 months and then consider it based on findings”, while 6% did not have an opinion. This question received 8,452 responses. 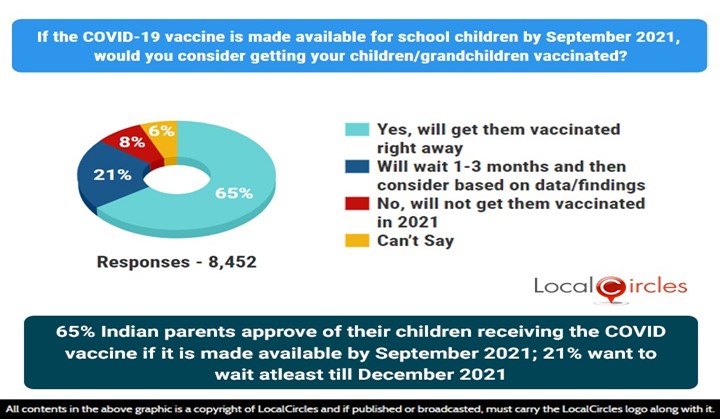 In summary, the majority of Indian parents are not comfortable sending their children to attend physical school unless they are vaccinated or the number of cases drops to zero in their district, as found by the LocalCircles survey. To open schools while ensuring safety, children will have to be vaccinated along with staff members and parents. Moreover, it will remain crucial to follow safety protocols strictly. States should consider the unavailability of a vaccine for children as well as an imminent 3rd wave, with a more infectious variant, before considering reopening schools. Efforts from states should be towards working with corporates through their CSR programs and enabling online, television and radio based learning programs in as many schools in rural India such that the education continues despite the pandemic.

The survey received more than 19,000 responses from parents located in 293 districts of the country. 49% parents were from Tier 1 districts, 29% from Tier 2 districts and 22% from Tier 3, Tier 4 and rural districts of India. The survey was conducted via LocalCircles platform and all participants are validated citizens who had to be registered with LocalCircles to participate in this survey.