Massive Black Marketing during the COVID 2nd wave and lessons for 3rd wave: 70% citizens overpaid for ambulances, 36% for oxygen; 19% for medicines, and 13% for RT-PCR tests 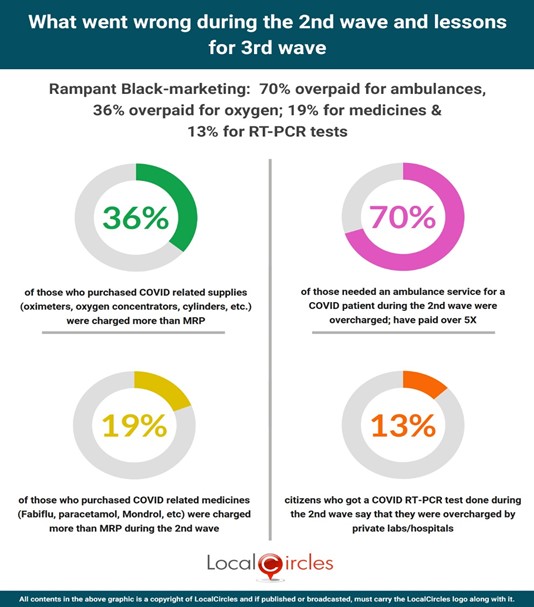 September 28, 2021, New Delhi: India's healthcare crumbled to a breaking point during the 2nd wave of COVID-19. From 16,000 reported cases recorded on March 14th, 2021 to over 25 times at 402,000 in just 45 days wreaked havoc that no one had imagined. The outbreak in the span of around 2 months tested the Central Government and every State Government of the country on their efficiency to handle the outbreak vis-à-vis Governance. The increase in daily COVID cases caused utter chaos across hospitals hit with an acute shortage of oxygen cylinders & concentrators, ventilators & ICU beds, COVID management medicines & testing facilities, and related supplies & equipment. An increasing number of patients laid in line for the treatment in almost every hospital that was taking COVID patients. During the time of distress, while caregivers were running from pillar to post seeking aid and treatment for the patient, many became the victim of black-marketing and scamming. Perpetrators were charging whatever premium they could for ambulance services, oxygen concentrators, oxygen cylinders, vials of Remdesivir and Tocilizumab drugs.

The Central and State Governments for the last few months have been preparing for a 3rd COVID wave, and LocalCircles is committed to escalating the plight of citizens faced during the 2nd wave so the same issues do not happen again as and when India experiences the outbreak in the coming months. Via a national survey, LocalCircles has attempted to find out an aggregate percentage of citizens who were overcharged for COVID-related supplies, ambulance services and medicines. It also tried to understand their experience getting RT-PCR tests during the outbreak. The survey received more than 38,000 responses from citizens across 389 districts of India.

36% of those who purchased COVID related supplies (oximeters, oxygen concentrators, cylinders, etc.) were charged over MRP during the 2nd wave

Citizens reported how in some cases an oximeter costing INR 300 was sold for INR 1500. Similarly, oxygen concentrators that had an MRP of INR 33,000 with a Chinese make were selling for INR 100,000 or higher. People also reported that new oxygen cylinders and their refills were commonly being sold for a 300-400% higher price than their regular price. Many scams also took place where the money was paid and the supplies were never delivered. 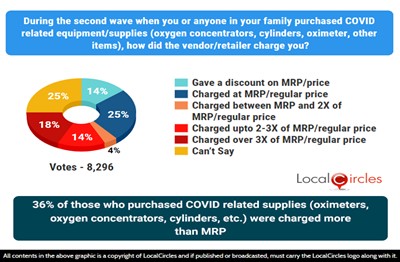 70% of those who needed an ambulance service for a COVID patient during the 2nd COVID wave were overcharged; half of them paid over 5X of the price

Wailing sounds of ambulances ferrying COVID patients had become a daily affair during the 2nd wave of the outbreak. Ambulances were working 24/7 under extraordinary conditions. On the other hand, the pandemic became a money-minting opportunity for some perpetrators who were charging out-of-the-pocket rates to families of the patient for driving them to a hospital. Media reports were rife about ambulances charging INR 42,000 to cover a distance of just 25 km. Later, the Government of Delhi capped the rates of Patient Transport Ambulance, Basic Life Support Ambulance, and Advanced Life Support Ambulance services at INR 1,500, INR 2,000, and INR 4,000 respectively, for covering up to 10 Kms and INR 100 per Kms. Despite the effort, the problem persisted.

Aimed to seek a collective response from citizens to know about the charges they or their family paid for hiring an ambulance during the 2nd wave for a COVID patient, 30% said they were “charged at regular price”, 10% were charged “100-500% more than regular price”, and 50% were “charged 500% or more than regular price”. With 10% of citizens voting for “can’t say” indicate that they were unaware of the charges for hiring an ambulance service. The findings of the survey indicate that 70% of those who needed an ambulance service for a COVID patient during the 2nd wave were overcharged, and half of them paid over 5 times the charge. This question in the survey received 8,154 responses. 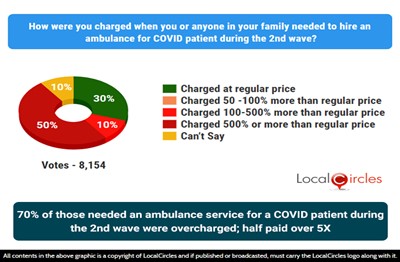 19% of those who purchased COVID related medicines (Tocilizumab, Remdesivir, Fabiflu, etc.) were charged more than MRP during the 2nd wave

Overcharging for medicines like Tocilizumab and Remdesivir was rampant in North, West and Central Indian states. Some other states like Karnataka, Tamil Nadu and Maharashtra handled it somewhat better by appointing the drug controllers as the custodians of these medicines. However, many ended up paying more than MRP for them. 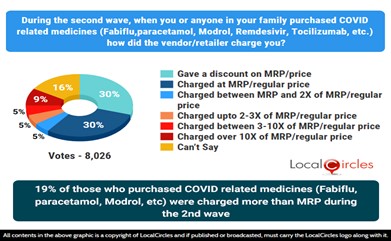 While citizens were financially overburdened with the cost of COVID treatment and COVID-related supplies/drugs, many also had to pay extra for getting the RT-PCR test. In many states, the price ceiling was fixed by the State Governments and yet citizens have written that these ceilings were violated by the labs. While testing and tracking are essential for the containment of COVID-19, India witnessed overcharging of tests along with delays in getting the results. Taking cognisance of the issue, LocalCircles asked citizens how much did they pay for getting a COVID RT-PCR test for themselves or their family members during the 2nd wave. In response, 9% said “got it done free of cost at a government facility”, 36% “got it done at a private lab/hospital at the price fixed by the State Government”. Breaking down the poll, 13% “got it done at a private lab/hospital but they were charged higher than the price fixed by the State Government”. There were also 38% of citizens who said they used a home sample collection service and they charged additionally for the home service and the price fixed by the State Government”, while 4% couldn’t say. The findings of the survey indicate that 13% of citizens who got a COVID RT-PCR test done during the 2nd wave were overcharged by private labs/hospitals. This question in the survey received 13,942 responses. 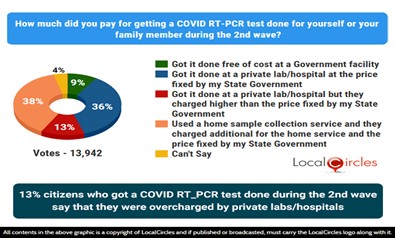 To better prepare for the 3rd wave such that this level of rampant black marketing does not take place again, citizens on the LocalCircles platform are of the opinion that the Government should come up with a better mechanism to track the supply of COVID-related drugs, oxygen cylinders and concentrators via unique identification such that the location of these products can be digitally tracked by the manufacturers and a sale/issuance requires the Aadhaar identification of the end-user. Similarly, there needs to be a mechanism in addition to the test results and personal details of the individuals undertaking RT-PCR test, it must be made mandatory for the labs doing RT-PCR tests to upload the price charged. With such information submitted, over charging is likely to reduce.

LocalCircles will be escalating the findings of this survey with the key stakeholders in the Central Government and all State Chief Secretaries so the feedback of the citizens can be considered in the relevant policy and enforcement interventions as well as in the preparedness for the 3rd COVID wave.

The survey received more than 38,000 responses from citizens across 389 districts of India. 67% of the participants were men, while 33% were women. 44% respondents were from tier 1, 33% from tier 2 and 23% respondents were from tier 3, 4 and rural districts. The survey was conducted via LocalCircles platform and all participants were validated citizens who had to be registered with LocalCircles to participate in this survey.